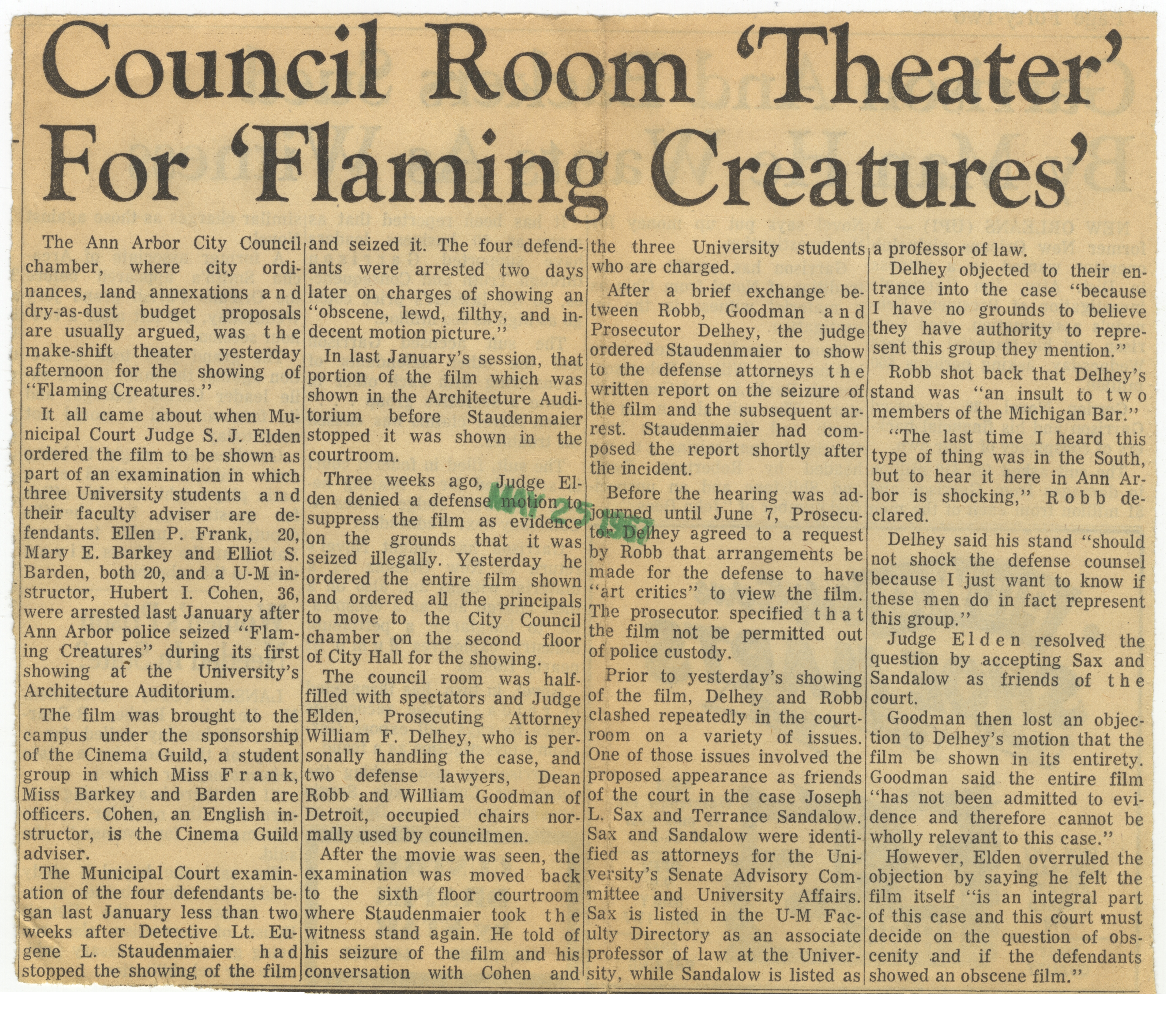 The Ann Arbor City Council chamber, where city ordinances, land annexations and dry-as-dust budget proposals are usually argued, was the make-shift theater yesterday afternoon for the showing of "Flaming Creatures."

It all came about when Municipal Court Judge S.J. Elden ordered the film to be shown as part of an examination in which three University students and their faculty adviser are defendants. Ellen P. Frank, 20, Mary E. Barkey and Elliot S. Barden, both 20, and a U-M instructor, Hubert I. Cohen, 36, were arrested last January after Ann Arbor police seized "Flaming Creatures" during its first showing at the University's Architecture Auditorium.

The film was brought to the campus under the sponsorship of the Cinema Guild, a student group in which Miss Frank, Miss Barkey and Barden are officers. Cohen, an English instructor, is the Cinema Guild adviser.

The Municipal Court examination of the four defendants began last January less than two weeks after Detective Lt. Eugene L. Staudenmaier had stopped the showing of the film and seized it. The four defendants were arrested two days later on charges of showing an "obscene, lewd, filthy, and indecent motion picture."

Three weeks ago, Judge Elden denied a defense motion to suppress the film as evidence on the grounds that it was seized illegally. Yesterday he ordered the entire film shown and ordered all the principals to move to the city council chamber on the second floor of City Hall for the showing.

After the movie was seen, the examination was moved back to the sixth floor courtroom where Staudenmaier took the witness stand again. He told of his seizure of the film and his conversation with Cohen and the three University students who are charged.

After a brief exchange between Robb, Goodman and Prosecutor Delhey, the judge ordered Staudenmaier to show to the defense attorneys the written report on the seizure of the film and the subsequent arrest. Staudenmaier had composed the report shortly after the incident.

Before the hearing was adjourned until June 7, Prosecutor Delhey agreed to a request by Robb that arrangements be made for the defense to have "art critics" to view the film. The prosecutor specified that the film not be permitted out of police custody.

Prior to yesterday's showing of the film, Delhey and Robb clashed repeatedly in the courtroom on a variety of issues. One of those issues involved the proposed appearance as friends of the court in the case Joseph L. Sax and Terrance Sandalow. Sax and Sandalow were identified as attorneys for the University's Senate Advisory Committee and University Affairs. Sax is listed in the U-M Faculty Directory as an associate professor of law at the University, while Sandalow is listed as a professor of law.

Delhey objected to their entrance into the case "because I have no grounds to believe they have authority to represent this group they mention."

Robb shot back that Delhey's stand was "an insult to two members of the Michigan Bar."

"The last time I heard this type of thing was in the South but to hear it here in Ann Arbor is shocking," Robb declared.

Delhey said his stand "should not shock the defense counsel because I just want to know if these men do in fact represent this group."

Judge Elden resolved this question by accepting Sax and Sandalow as friends of the court.

Goodman then lost an objection to Delhey's motion that the film be shown in its entirety Goodman said the entire film "has not been admitted to evidence and therefore cannot bi wholly relevant to this case."

However, Elden overruled this objection by saying he felt the film itself "is an integral part of this case and this court must decide on the question of obscenity and if the defendant showed an obscene film."