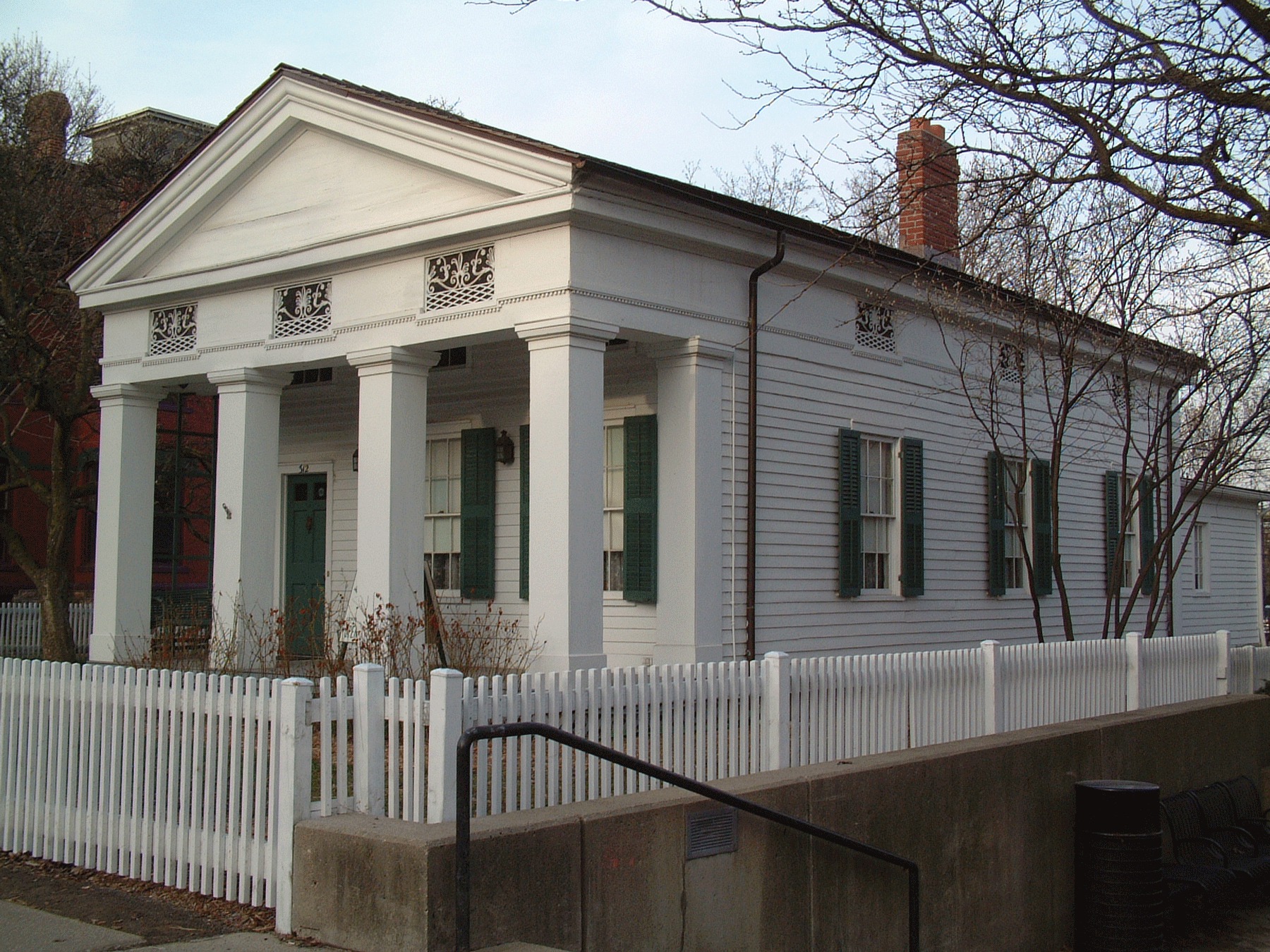 Thousands of people breathed a sigh of relief when this house was purchased by the City of Ann Arbor in 1969 in one of our earliest efforts to preserve our architectural heritage. The Ann Arbor Historic District Commission was created by city ordinance in 1971 and has had its offices in the house since 1975.

The Kempf house was built in 1853 for Henry DeWitt Bennett, an active citizen who served some years as postmaster and, from 1869 to 1886, as secretary and steward of the University of Michigan. Long renowned for its graceful simplicity, the temple-style Greek Revival architecture of the Kempf House has been described in books, magazines, and newspaper articles, and won entry in the National Register of Historic Places in 1973.

A classic story-and-a-half of the front gabled temple form, the home was described in 1919 by architectural historian Fiske Kimball as an illustration of the "simplification often introduced in the Old Northwest to adapt the ambitious temple type to less pretentious uses. Square piers are substituted for the costly circular columns; the 'anti-capital,' simplest of Greek Doric forms, is used to crown them. Instead of two full stories below the cornice, the house has its upper story in the roof, with small 'frieze windows... screened by delicate iron gratings designed on the motif of the Greek anthemion."

Compared to the exterior, the interior is quite plain. The most elaborately decorated room is the studio, designed originally as a parlor for special occasions and the reception of important guests. An interesting feature here is the tapering of door and window frames.

When Bennett retired and left Ann Arbor, he sold the house to his wealthy neighbor, A. L. Noble, who owned the Star Clothing House on Main Street. Noble removed some interior walls and rented the house first to James M. Stafford, a merchant tailor and then, in 1890, to musicians Reuben H. and Pauline Widenmann Kempf. After Noble's death, the Kempfs purchased the house from his widow in 1894.

Born in Pittsfield Township in 1859 into one of the county's earliest families, Reuben Kempf graduated from the Royal Conservatory in Stuttgart, Germany, and returned to Ann Arbor to pursue a long career as a musician and teacher. Kempf organized and directed concert series which attracted artists from a wide area. At the suggestion of University of Michigan President James B. Angell, Kempf assembled a singing society, the Beethoven Gesangverein (later the Lyra Male Chorus), to foster better understanding between town and gown through the universal language of music. He served for 33 years (1895-1928) as organist and choir director of St. Andrew's Episcopal Church. Mrs. Kempf, the former Pauline Widenmann, was a graduate of the Cincinnati Conservatory and a pupil of the celebrated voice coach Oscar Saenger. An accomplished contralto, she taught her voice pupils to sing while facing two large mirrors, reminding them that proper posture is an essential foundation of sweet song. Mr. Kempf trained future Paderewskis on his Steinway, the first concert grand piano in Ann Arbor, which remains in the Kempf House and is often used at social events. Paderewski himself played on this instrument when it was borrowed by the University for one of his concerts.

Mr. Kempf died in 1945 at the age of 86. When Mrs. Kempf died eight years later, the house was acquired by neighbors, Mr. and Mrs. Earl V. Parker. After Earl's death in 1968, Mrs. Parker sold the house to the city to protect it from potential demolition.

With assistance from the Parks Department, the Kempf House Society, a volunteer organization, is refurbishing the interior of the house and maintaining it as a Center for Local History. The Society provides open houses, tours and special events.