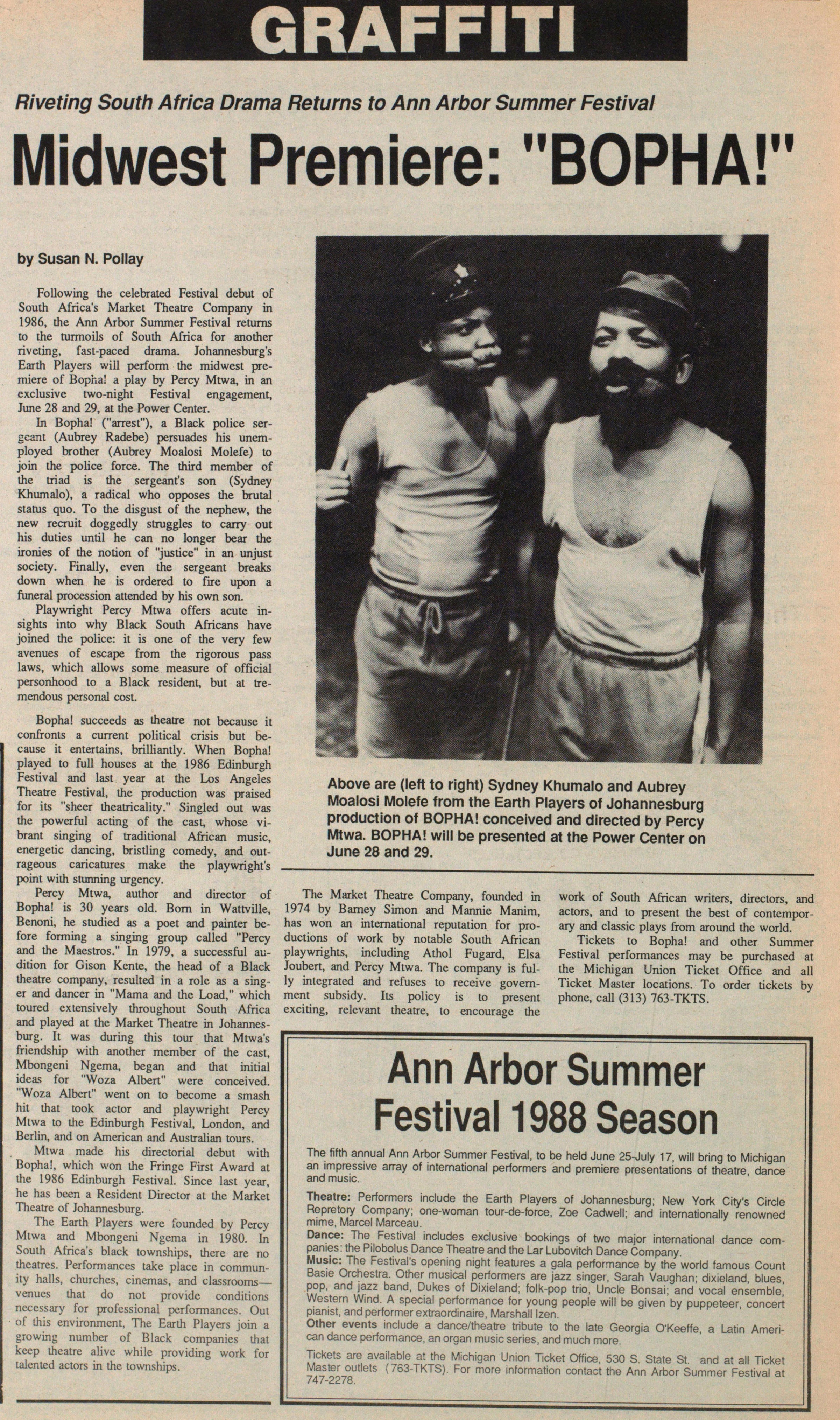 Following the celebrated Festival debut of South Africa's Market Theatre Company in 1986, the Ann Arbor Summer Festival returns to the turmoils of South Africa for another riveting, fast-paced drama. Johannesburg's Earth Players will perform the midwest premiere of Bopha! a play by Percy Mtwa, in an exclusive two-night Festival engagement, June 28 and 29, at the Power Center.

In Bopha! ("arrest"), a Black police sergeant (Aubrey Radebe) persuades his unemployed brother (Aubrey Moalosi Molefe) to join the police force. The third member of the triad is the sergeant's son (Sydney Khumalo), a radical who opposes the brutal status quo. To the disgust of the nephew, the new recruit doggedly struggles to carry out his duties until he can no longer bear the ironies of the notion of "justice" in an unjust society. Finally, even the sergeant breaks down when he is ordered to fire upon a funeral procession attended by his own son.

Playwright Percy Mtwa offers acute insights into why Black South Africans have joined the police: it is one of the very few avenues of escape from the rigorous pass laws, which allows some measure of official personhood to a Black resident, but at tremendous personal cost.

Bopha! succeeds as theatre not because it confronts a current political crisis but because it entertains, brilliantly. When Bopha! played to full houses at the 1986 Edinburgh Festival and last year at the Los Angeles Theatre Festival, the production was praised for its "sheer theatricality." Singled out was the powerful acting of the cast, whose vibrant singing of traditional African music, energetic dancing, bristling comedy, and outrageous caricatures make the playwright's point with stunning urgency.

Percy Mtwa, author and director of Bopha! is 30 years old. Borm in Wattville, Benoni, he studied as a poet and painter before forming a singing group called "Percy and the Maestros." In 1979, a successful audition for Gison Kente, the head of a Black theatre company, resulted in a role as a singer and dancer in "Mama and the Load," which toured extensively throughout South Africa and played at the Market Theatre in Johannesburg. It was during this tour that Mtwa's friendship with another member of the cast, Mbongeni Ngema, began and that initial ideas for "Woza Albert" were conceived. "Woza Albert" went on to become a smash hit that took actor and playwright Percy Mtwa to the Edinburgh Festival, London, and Berlin, and on American and Australian tours.

Mtwa made his directorial debut with Bopha!, which won the Fringe First Award at the 1986 Edinburgh Festival. Since last year, he has been a Resident Director at the Market Theatre of Johannesburg.

The Earth Players were founded by Percy Mtwa and Mbongeni Ngema in 1980. In South Africa's black townships, there are no theatres. Performances take place in community halls, churches, cinemas, and classrooms - venues that do not provide conditions necessary for professional performances. Out of this environment, The Earth Players join a growing number of Black companies that keep theatre alive while providing work for talented actors in the townships.

The Market Theater Company, founded in 1974 by Barney Simon and Mannie Manim, has won an international reputation for productions of work by notable South African playwrights, including Athol Fugard, Elsa Joubert, and Percy Mtwa. The company is fully integrated and refuses to receive government subsidy. lts policy is to present exciting, relevant theatre, to encourage the work of South African writers, directors, and actors, and to present the best of contemporary and classic plays from around the world.

Tickets to Bopha! and other Summer Festival performances may be purchased at the Michigan Union Ticket Office and all Ticket Master locations. To order tickets by phone, call (313) 763-TKTS.

Above are (left to right) Sydney Khumalo and Aubrey Moalosi Molefe from the Earth Players of Johannesburg production of BOPHA! conceived and directed by Percy Mtwa. BOPHA! will be presented at the Power Center on June 28 and 29. HmLlllEïH