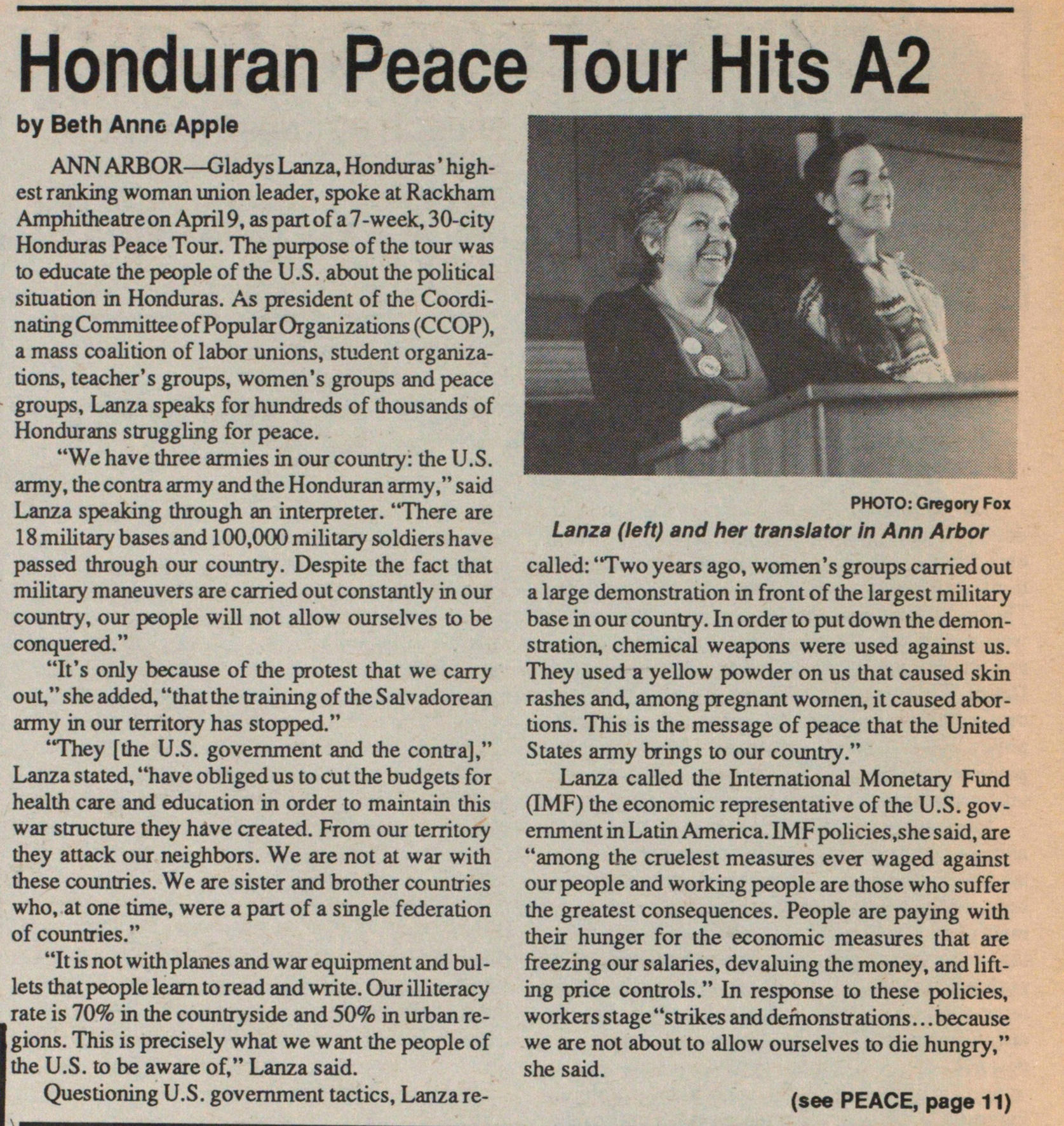 ANN ARBOR- Gladys Lanza, Honduras ' highest rankmg woman unión leader, spoke at Rackham Amphitheatre on April 9, as part of a 7-week, 3O-city Honduras Peace Tour. The purpose of the tour was to edúcate the people of the U.S. about the political situation in Honduras. As president of the Coordinating Committee of Popular Organiza tions (CCOP), a mass coalition of labor unions, student organizations, teacher's groups, women's groups and peace groups. Lanza spcaks for hundreds of thousands of Hondurans struggling for peace. "We have three armies in our country: the U.S. army, the contra army and the Honduran army," said Lanza spcaking through an interpreter. "There are 1 8 mili tary bases and 1 00,000 military soldiers have passed through our country. Despite the fact that military maneuvers are carried out constantly in our country, our people will not allow ourselves to be conquered." "It's only because of the protest that we carry out," she added, "that the training of the Salvadorean army in our territory has stopped." 'They [the U.S. govemment and the contra]," Lanza stated, "have obliged us to cut the budgets for health care and education in order to maintain this war structure they have created. From our territory they attack our neighbors. We are not at war with these counüies. We are sister and brother countries who, at one time, were a part of a single federation of countries." "It is not with planes and war equipment and bullets that people learn to read and write. Our illiteracy rate is 70% in the countryside and 50% in urban regions. This is precisely what we want the people of the U.S. to be aware of," Lanza said. Questioning U.S. govemment tactics, called: 'Two years ago, women's groups carried out a large demonstration in front of the largest military base in our country. In order to put down the demonstration, chemical weapons were used against us. They used a yellow powder on us that caused skin rashes and, among pregnant women, it caused abortions. This is the message of peace that the United States army brings to our country." Lanza called the International Monetary Fund (IMF) the economie representative of the U.S. govemment in Latin America. IMFpolicies.she said, are "among the cruelest measures ever waged against our people and working people are those who suffer the greatest consequences. People are paying with their hunger for the economie measures that are freezing our salaries, devaluing the money, and lifting price controls." In response to these policies, workers stage "strikes and demons trations . . . because we are not about to allow ourselves to die hungry," she said. (see PEACE, page 11) PFAPF I Larlaü (trom page four) Lanza, president of the National Electrical Workers Union, described her government's reaction lo workers' strikes saying: The Honduran government scnds "tanks into the slreets in order to keep us from demonstraling. This is the training thal the Honduran army is recciving from the United States. That's what the contra is used for in our country - to particípate in the repressive orders of the state. "There is a slruclurc of terror, in order to suppress the people in order to keep Üicm from protesting," Lanza conlinued. "Dealh squads cxist which constantly kidnap the leaders of these popular movements. Nol only the leaders, but their families as wcll. The dealh squads carry out psychological warfarc agaiast activists that doesn't allow us to live in peace. Whcn we are caplurcd, we're taken lo clandestino prisons whcre we'resubmitledlo psychological and physical torture." Lan.a and othcr aclivists are currcntly working on proving the direct link between the Honduran army and theright-wing AntiCommunist Action Alliance dealh squads. Lan.a 's name appears on their death lisLs and her life and those of her family are in constant danger. She has been imprisoned thrce times. Lanza believes U.S. aid could be used lo help Hondurans provide employmenl, education and health care. Bul instead, U.S. laxes fund "landing strips for more planes, radar for spy ing, intelligence forces for the CIA and contra, and a group of torturers within the Honduran army, torturers who have been Crained here in North America. That is not a message of peace," said Lan.a.