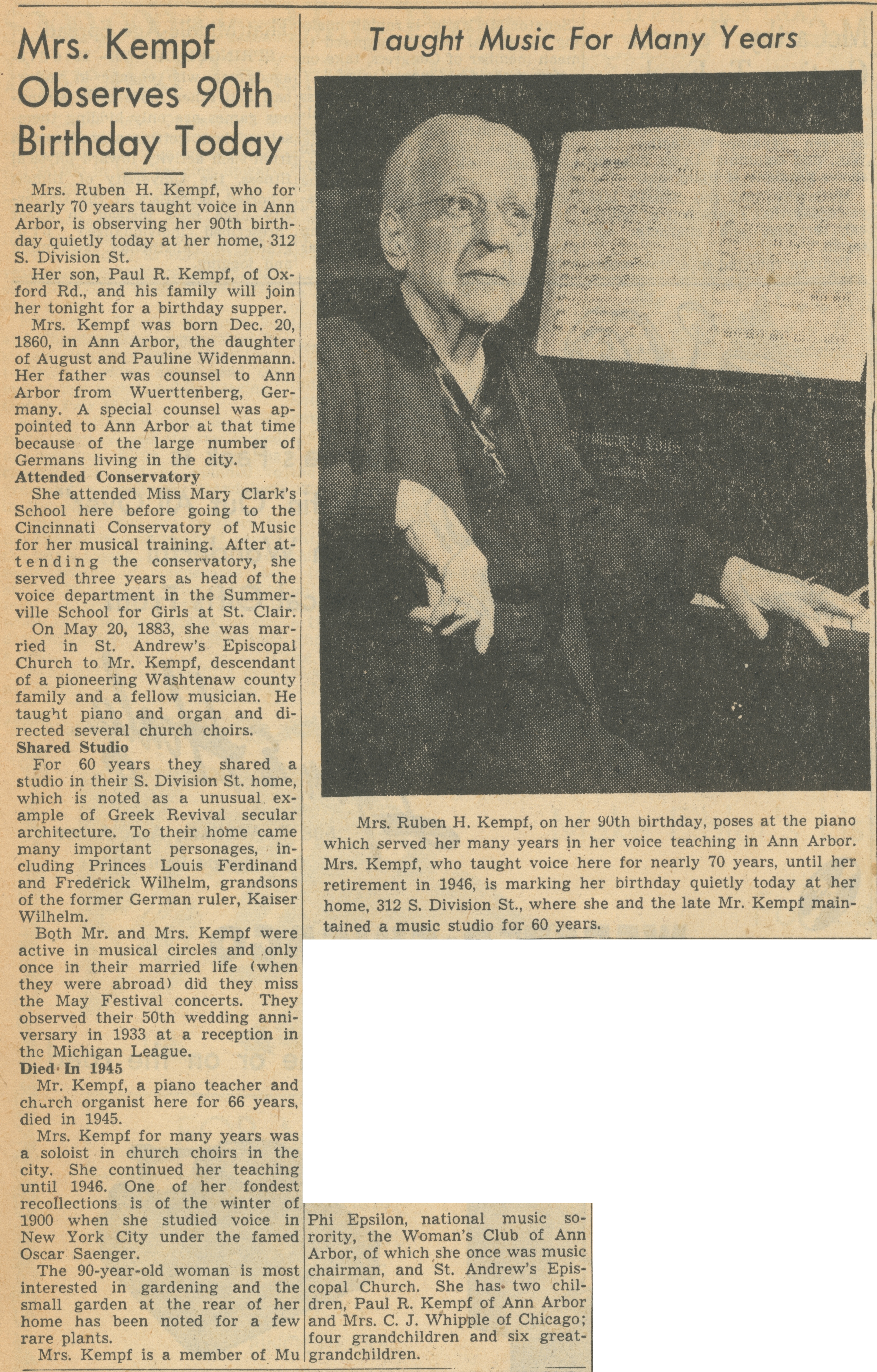 Mrs. Ruben H. Kempf, who for nearly 70 years taught voice in Ann Arbor, is observing her 90th birthday quietly today at her home, 312 S. Division St.
Her son, Paul R. Kempf, of Oxford Rd., and his family will join her tonight for a birthday supper.
Mrs. Kempf was born Dec. 20, 1860, in Ann Arbor, the daughter of August and Pauline Widenmann. Her father was counsel to Ann Arbor from Wuerttenberg, Germany. A special counsel was appointed to Ann Arbor at that time because of the large number of Germans living in the city.
Attended Conservatory
She attended Miss Mary Clark's School here before going to the Cincinnati Conservatory of Music for her musical training. After attending the conservatory, she served three years as head of the voice department in the Summerville School for Girls at St. Clair.
On May 20, 1883, she was married in St. Andrew's Episcopal Church to Mr. Kempf, descendant of a pioneering Washtenaw county family and a fellow musician. He taught piano and organ and directed several church choirs.
Shared Studio
For 60 years they shared a studio in their Division St. home, which is noted as a unusual example of Greek Revival secular architecture. To their home came many important personages, including Princes Louis Ferdinand and Frederick Wilhelm, grandsons of the former German ruler, Kaiser Wilhelm.
Both Mr. and Mrs. Kempf were active in musical circles and only once in their married life (when they were abroad) did they miss the May Festival concerts. They observed their 50th wedding anniversary in 1933 at a reception in the Michigan League.
Died In 1945
Mr. Kempf, a piano teacher and church organist here for 66 years, died in 1945.
Mrs. Kempf for many years was a soloist in church choirs in the city. She continued her teaching until 1946. One of her fondest recollections is of the winter of 1900 when she studied voice in New York City under the famed Oscar Saenger.
The 90-year-old woman is most interested in gardening and the small garden at the rear of her home has been noted for a few rare plants.
Mrs. Kempf is a member of Mu Phi Epsilon, national music sorority, the Woman's Club of Ann Arbor, of which she once was music chairman, and St. Andrew's Episcopal Church. She has two children, Paul R. Kempf of Ann Arbor and Mrs. C. J. Whipple of Chicago; four grandchildren and six great-grandchildren.