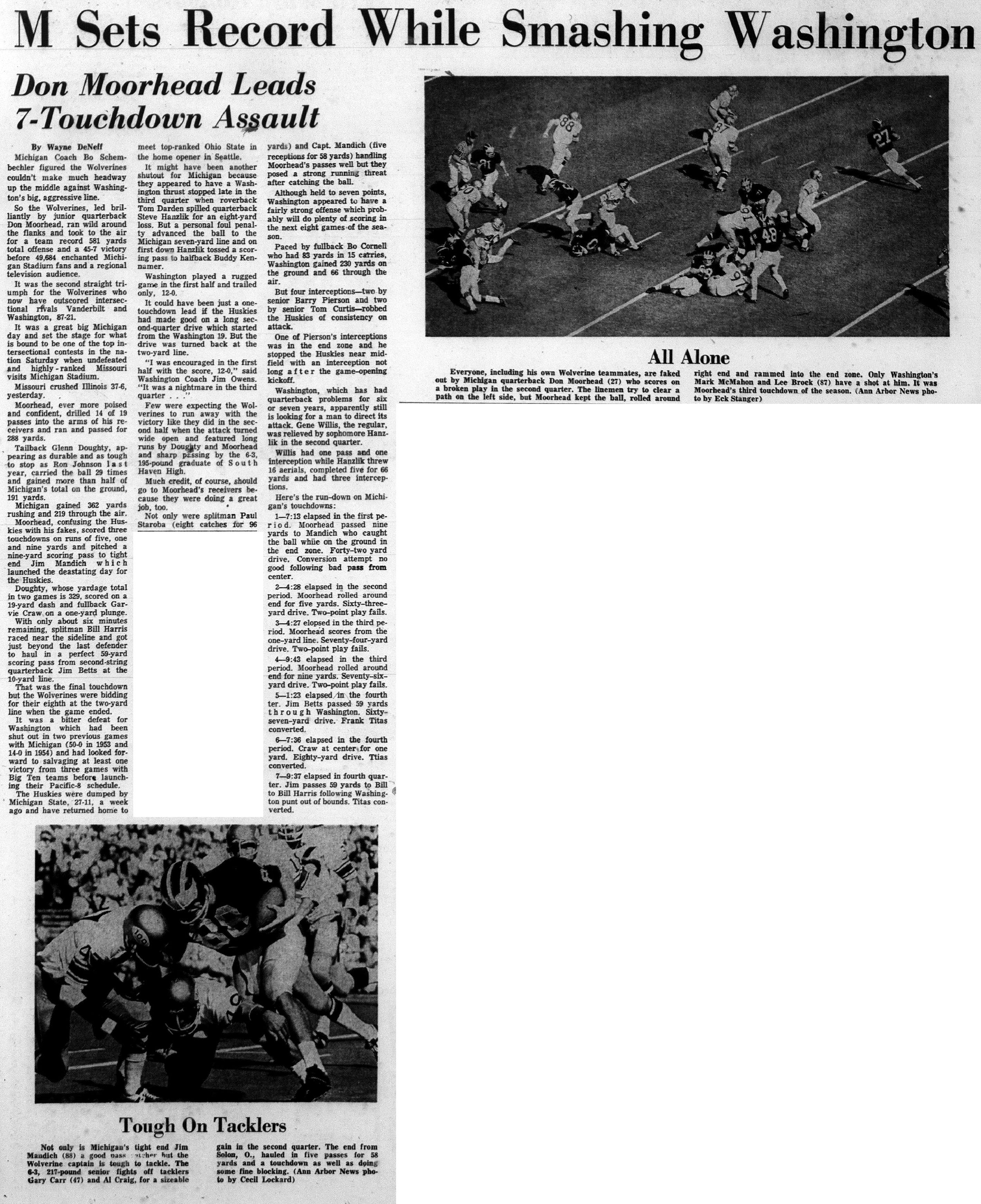 So the Wolverines, led brilliantly by junior quarterback Don Moorhead ran wild around the flanks and took to the air for a team record 581 yards total offense and a 45-7 victory before 49,684 enchanted Michigan Stadium fans and a regional television audience.

It was the second straight triumpg for the Wolverines who now have outscored intersectional rivals Vanderbilt and Washington, 87-21.

It was a great big Michigan day and set the stage for what is bound to be one of the top intersectional contests in the nation Saturday when undefeated and highly-ranked Missouri visits Michigan Stadium.

Moorhead, ever more poised and confident, drilled 14 of 19 passes into the arms of his receivers and ran and passed for 288 yards.

Tailback Glenn Doughty, appearing as durable and as tough to stop as Ron Johnson last year, carried the ball 29 times and gained more than half of Michigan’s total on the ground, 191 yards.

Michigan gained 362 yards rushing and 219 through the air.

Moorhead, confusing the Huskies with his fakes, scored three touchdowns on runs of five, one on nine yards and pitched a nine-yard scoring pass to tight end Jim Mandich which launched the devastating day for the Huskies.

Doughty, who yardage total in two games is 329, scored on a 19-yard dash and fullback Garvie Craw on a one-yard plunge.

With only about six minutes remaining, splitman Bill Harris raced near the sideline and got just beyond the last defender to haul in a perfect 59-yard scoring pass from second-string quarterback Jim Betts at the 10-yard line.

That was the final touchdown but the Wolverines were bidding for their eighth at the two-yard line when the game ended.

It was a bitter defeat for Washington which had been shut out in two previous games with Michigan (50-0 in 1953 and 14-0 in 1954) and had looked forward to salvaging at least one victory from three games with Big Ten teams before launching their Pacific-8 schedule.

The Huskies were dumped by Michigan State, 27-11, a week ago and have returned home to meet top-ranked Ohio State in the home opener in Seattle.

It might have been another shutout for Michigan because they appeared to have a Washington thrust stopped late in the third quarter when roverback Tom Darden spilled quarterback Steve Hanzlik for an eight-yard loss. But a personal foul penalty advanced the ball to the Michigan seven-yard line and on first down Hanzlik tossed a scoring pass to halfback Buddy Kennamer.

Washington played a rugged game in the first half and trailed only 12-0.

It could have been just a one-touchdown lead if the Huskies had made good on a long second-quarter drive which started from the Washington 19. But the drive was turned back at the two-yard line.

“I was encouraged in the first half with the score, 12-0,” said Washington Coach Jim Owens. “It was a nightmare in the third quarter…”

Few were expecting the Wolverines to run away with the victory like they did in the second half when the attack turned wide open and featured long runs by Doughty and Moorhead and sharp passing by the 6-3, 195-pound graduate of South Haven High.

Much credit, of course, should go to Moorhead’s receivers because they were doing a great job, too.

Not only were splitman Paul Staroba (eight catches for 96 yards) and Capt. Mandich (five receptions for 58 yards) handling Moorhead’s passes well but they posed a strong running threat after catching the ball.

Although held to seven points, Washington appeared to have a fairly strong offense which probably will do plenty of scoring in the next eight games of the season.

Paced by fullback Bo Cornell who had 83 yards in 15 carries, Washington gained 230 yards on the ground and 66 through the air.

But four interceptions —two by senior Barry Pierson and two by senior Tom Curtis—robbed the Huskies of consistency on attack.

One of Pierson’s interceptions was in the end zone and he stopped the Huskies near midfield with an interception not long after the game-opening kickoff.

Washington, which has had quarterback problems for six or seven years, apparently still is looking for a man to direct its attack. Gene Willis, the regular, was relieved by sophomore Hanzlik in the second quarter.

Willis had one pass and one interception while Hanzlik threw 16 aerials, completed five for 66 yards and had three interceptions.

Here’s the run-down on Michigan’s touchdowns:

1—7:13 elapsed in the first period. Moorhead passed nine yards to Mandich who caught the ball while on the ground in the end zone. Forty-two yard drive. Conversation attempt no good following bad pass from center.

6—7:36 elapsed in the fourth period. Craw at center for one yard. Eight-yard drive, Titas converted.

PHOTO CAPTION 1: Tough On Tacklers: Not only is Michigan’s tight end Jim Mandich (88) a good pass pitcher but the Wolverine captain is tough to tackle. The 6-3, 217-pound senior fights off tacklers Gary Carr (47) and Al Craig, for a sizeable gain in the second quarter. The end from Solon, O., hauled in five passes for 58 yards and had a touchdown as well as going some fine blocking. (Ann Arbor News photo by Cecil Lockard)

PHOTO CAPTION 2: All Alone: Everyone, including his own Wolverine teammates, are faked out by Michigan quarterback Don Moorhead (27) who scores on a broken play in the second quarter. The linemen try to clear a path on the left side, but Moorhead kept the ball, rolled around right end and rammed into the end zone. Only Washington’s Mark McMahon and Lee Brock (87) have a shot at him. It was Moorhead’s third touchdown of the season. (Ann Arbor News photo by Eck Stanger).