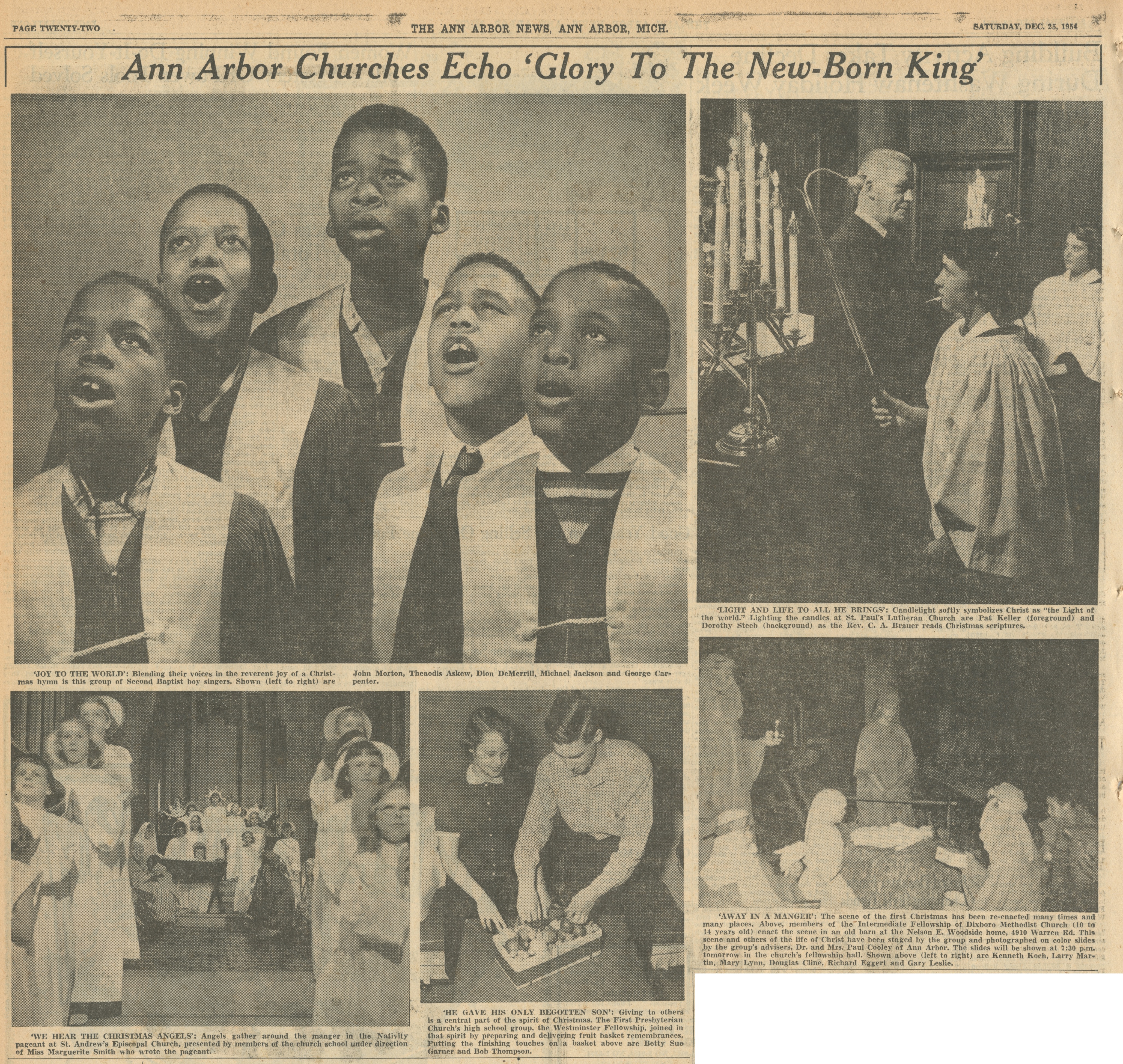 'JOY TO THE WORLD': Blending their voices in the reverent joy of a Christmas hymn is this group of Second Baptist boy singers. Shown (left to right) are John Morton, Theaodis Askew, Dion DeMerrill, Michael Jackson and George Carpenter.

'LIGHT AND LIFE TO ALL HE BRINGS': Candlelight softly symbolizes Christ as "the Light of the world." Lighting the candles at St. Paul's Lutheran Church are Pat Keller (foreground) and Dorothy Steeb (background) as the Rev. C. A. Brauer reads Christmas scriptures.

'WE HEAR THE CHRISTMAS ANGELS': Angels gather around the manger in the Nativity pageant at St. Andrew's Episcopal Church, presented by members of the church school under direction of Miss Marguerite Smith who wrote the pageant.

'HE GAVE HIS ONLY BEGOTTEN SON': Giving to others is a central part of the spirit of Christmas. The First Presbyterian Church's high school group, the Westminster Fellowship, joined in that spirit by preparing and delivering fruit basket remembrances. Putting the finishing touches on a basket above are Betty Sue Garner and Bob Thompson.

'AWAY IN A MANGER': The scene of the first Christmas has been re-enacted many times and many places. Above, members of the Intermediate Fellowship of Dixboro Methodist Church (10 to 14 years old) enact the scene in an old barn at the Nelson E. Woodside home, 4910 Warren Rd. This scene and others of the life of Christ have been staged by the group and photographed on color slides by the group's advisers, Dr. and Mrs. Paul Cooley of Ann Arbor. The slides will be shown at 7:30 p.m. tomorrow in the church's fellowship hall. Shown above (left to right) are Kenneth Koch, Larry Martin, Mary Lynn, Douglas Cline, Richard Eggert and Gary Leslie.