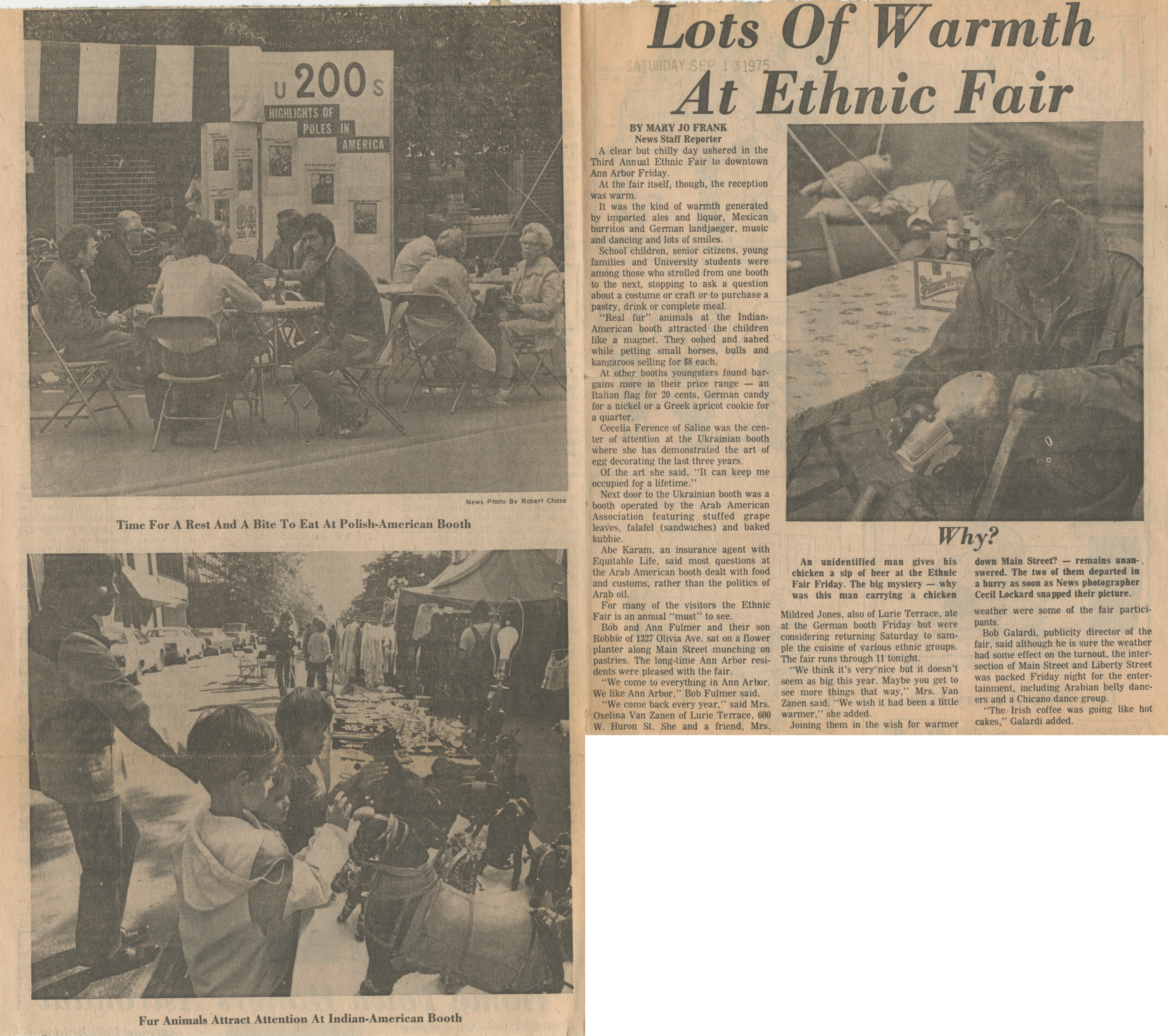 An unidentified man gives his chicken a sip of beer at the Ethnic Fair Friday. The big mystery - why was this man carrying a chicken down Main Street? — remains unanswered. The two of them departed in a hurry as soon as News photographer Cecil Lockard snapped their picture.

At the fair itself, though, the reception was warm.

It was the kind of warmth generated by imported ales and liquor, Mexican burritos and German landjaeger, music and dancing and lots of smiles.

School children, senior citizens, young families and University students were among those who strolled from one booth to the next, stopping to ask a question about a costume or craft or to purchase a pastry, drink or complete meal.

"Real fur" animals at the Indian-American booth attracted the children like a magnet. They oohed and aahed while petting small horses, bulls and kangaroos selling for $8 each.

At other booths youngsters found bargains more in their price range — an Italian flag for 20 cents. German candy for a nickel or a Greek apricot cookie for a quarter.

Cecelia Ference of Saline was the center of attention at the Ukrainian booth where she has demonstrated the art of egg decorating the last three years.

Of the art she said. "It can keep me occupied for a lifetime."

Next door to the Ukrainian booth was a booth operated by the Arab American Association featuring stuffed grape leaves, falafel (sandwiches) and baked kubbie.

Abe Karam, an insurance agent with Equitable Life, said most questions at the Arab American booth dealt with food and customs, rather than the politics of Arab oil.

For many of the visitors the Ethnic Fair is an annual "must” to see.

Bob and Ann Fulmer and their son Robbie of 1327 Olivia Ave. sat on a flower planter along Main Street munching on pastries. The long-time Ann Arbor residents were pleased with the fair.

"We come to everything in Ann Arbor. We like Ann Arbor." Bob Fulmer said.

"We come back every year," said Mrs. Oxclina Van Zanen of Lurie Terrace, 600 W. Huron St. She and a friend. Mrs. Mildred Jones, also of Lurie Terrace, ate at the German booth Friday but were considering returning Saturday to sample the cuisine of various ethnic groups. The fair runs through 11 tonight.

"We think it's very nice but it doesn't seem as big this year. Maybe you get to see more things that way," Mrs. Van Zanen said. "We wish it had been a little warmer." she added.

Joining them in the wish for warmer weather were some of the fair participants.

Bob Galardi, publicity director of the fair, said although he is sure the weather had some effect on the turnout, the intersection of Main Street and Liberty Street was packed Friday night for the entertainment, including Arabian belly dancers and a Chicano dance group.

"The Irish coffee was going like hot cakes," Galardi added.