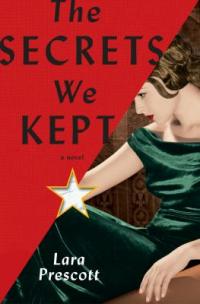 The Secrets We Kept * * *  by debut novelist Lara Prescott is set at the height of the Cold War, based on the true story of the CIA plot of infiltrate the hearts and minds of Soviet Russia, not with propaganda, but with the greatest love story of the 20th century.

Narrated by 3 women between 1949 and 1961, they were instrumental in bringing Doctor Zhivago to the West, when for a decade, celebrated poet Boris Pasternak could not find a publisher for his novel in Soviet Russia, banned "due to its critiques of the October Revolution and its so-called subversive nature".

In Moscow, Olga Vsevolodovna, Pasternak’s mistress and muse, and inspiration for Zhivago’s heroine, Lara endured three years at a Gulag for refusing to denounce Pasternak or the novel.   In Washington D. C., American-born Irina Drozdova, a typist at the Agency (CIA) found herself recruited for “fieldwork”, and under the tutelage of glamorous Sally Forrester, a former OSS agent, quickly learned the trade craft of being a “carrier” - make drops, and invisibly ferry classified documents. Her ultimate mission - disguised as a nun, she was to place copies of Dr. Zhivago, printed in the original Russian into the hands of Soviet citizens visiting the 1958 World's Fair.

“Through lucid images and vibrant storytelling, Prescott creates an edgy postfeminist vision of the Cold War, encompassing Sputnik to glasnost, typing pool to gulag, for a smart, lively page-turner. This debut shines as spy story, publication thriller, and historical romance with a twist.” (Publishers Weekly)