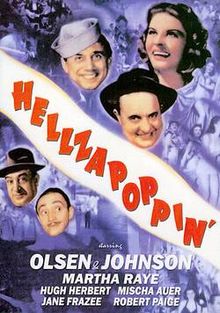 Modern viewers accustomed to comic surreality through exposure to Mr. Show, Monty Python's Flying Circus or any number of Adult Swim entertainments will be taken aback by the rampant absurdity on hand in this 1941 musical meta-comedy. Based on the hit Broadway variety show of the same name, Hellzapoppin’ spoofs its own plotlessness from the start, as stars Ole Olson and Chic Johnson argue on screen with their director over the need for a story at all, eventually relenting to wisecrack their way through a cardboard love yarn meant only to frame the slapstick set pieces and musical numbers.

From there, Hellzapoppin’ bursts with outrageous images: an opening number in Hell that crosses Bosch with Busby Berkeley, reckless archery, talking dogs, projection booth mishaps, sneezing ballerinas and the most athletic, death-defying exhibition of Lindy Hopping ever captured on camera. The songs range from good to great, all in the easy-swinging jazz style of the day, paired with inventive dance and synchronized swim routines that extend the film’s fourth wall-busting approach. Those with a taste for Golden Age Hollywood will recognize Shemp Howard, Martha Raye and Elisha Cook Jr. among the principals, but the unbridled anarchy of Hellzapoppin’ remains fresh enough after eight decades for it to rise above being a mere nostalgia piece. Put it on hold today!