Packard-Beakes Bypass Job May Be Under Way In '69 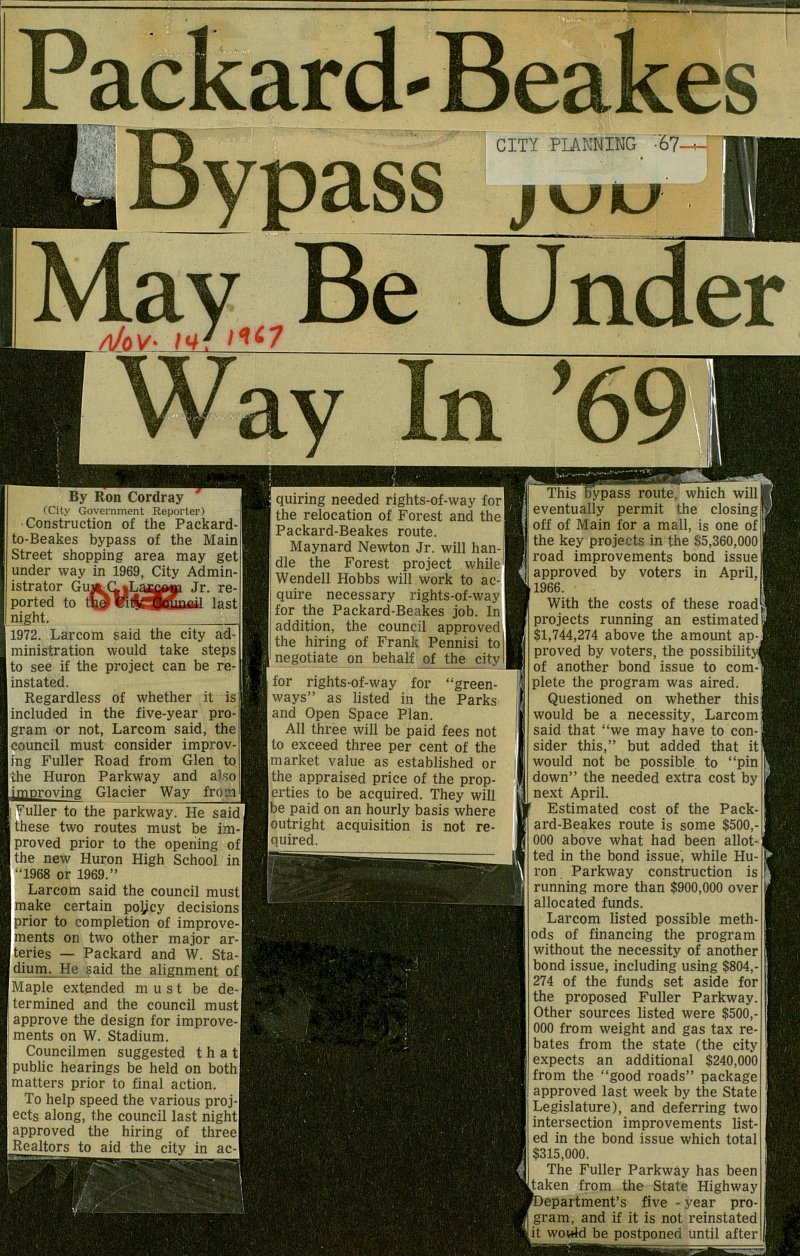 Construction of the Packard-to-Beakes bypass of the Main Street shopping area may get under way in 1969, City Administrator Guy Larcom Jr. reported to the City Council last night. _Larcom said the city administration would take steps to see if the project can be reinstated. Regardless of whether it is included in the five-year program or not, Larcom said, the council must consider improving Fuller Road from Glen to the Huron Parkway and also improving Glacier Way from Fuller to the parkway. He said these two routes must be improved prior to the opening of the new Huron High School in "1968 or 1969." Larcom said the council must make certain policy decisions prior to completion of improvements on two other major arteries - Packard and W. StaIdium. He said the alignment of Maple extended must be determined and the council must approve the design for improvements on W. Stadium. Councilmen suggested t h a t public hearings be held on both matters prior to final action. To help speed the various projects along, the council last night approved the hiring of three Realtors to aid the city in acquiring needed rights-of-way for the relocation of Forest and the Packard-Beakes route. Maynard Newton Jr. will handle the Forest project while Wendell Hobbs will work to acquire necessary rights-of-way for the Packard-Beakes job. In addition, the council approved the hiring of Frank Pennisi to negotiate on behalf of the city for rights-of-way for "greenways" as listed in the Parks and Open Space Plan. All three will be paid fees not to exceed three per cent of the market value as established or the appraised price of the properties to be acquired. They will be paid on an hourly basis where outright acquisition is not required. This bypass route, which will eventually permit the closing off of Main for a mall, is one of the key projects in the $5,360,000 road improvements bond issue approved by voters in April, 1966. With the costs of these road projects running an estimated $1,744,274 above the amount approved by voters, the possibility of another bond issue to complete the program was aired. Questioned on whether this would be a necessity, Larcom said that "we may have to consider this," but added that it would not be possible to "pin down" the needed extra cost by next April. Estimated cost of the Packard-Beakes route is some $500,000 above what had been allotted in the bond issue, while Huron Parkway construction is running more than $900,000 over allocated funds. Larcom listed possible methods of financing the program without the necessity of another bond issue, including using $804,274 of the funds set aside for the proposed Fuller Parkway. Other sources listed were $500,000 from weight and gas tax rebates from the state (the city expects an additional $240,000 from the "good roads" package approved last week by the State Legislature), and deferring two intersection improvements listed in the bond issue which total $315,000. The Fuller Parkway has been taken from the State Highway Department's five -year program, and if it is not reinstated it would be postponed until after