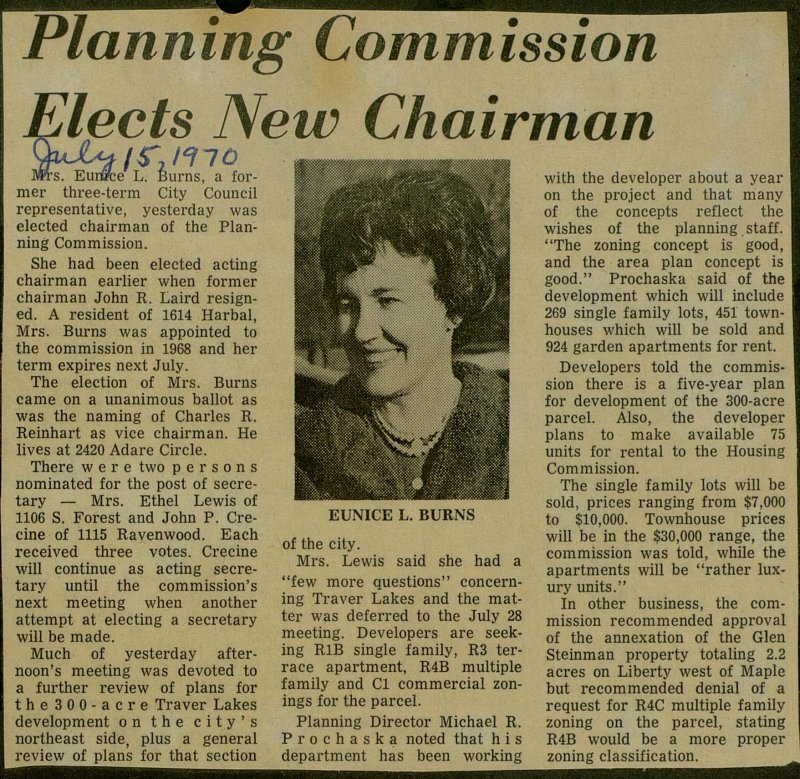 Mts. Eurice L. Burns, a former three-term City Council representative, yesterday was elected chairman of the Planning Commission. She had been elected acting chairman earlier when former chairman John R. Laird resigned. A resident of 1614 Harbal, Mrs. Burns was appointed to the commission in 1968 and her term expires next July. The election of Mrs. Burns came on a unanimous ballot as was the naming of Charles R. Reinhart as vice chairman. He lives at 2420 Adare Circle. There w e r e two persons nominated for the post of secretary - Mrs. Ethel Lewis of 1106 S. Forest and John P. Crecine of 1115 Ravenwood. Each received three votes. Crecine will continue as acting secretary until the commission's next meeting when another attempt at electing a secretary will be made. Much of yesterday afternoon's meeting was devoted to a further review of plans for the 300-acre Traver Lakes development on the city's northeast side, plus a general review of plans for that section of the city. Mrs. Lewis said she had a "few more questions" concerning Traver Lakes and the matter was deferred to the July 28 meeting. Developers are seeking RIB single family, R3 terrace apartment, R4B multiple family and Cl commercial zonings for the parcel. Planning Director Michael R. Prochaska noted that h i s department has been working with the developer about a year on the project and that many of the concepts reflect the wishes of the planning staff. "The zoning concept is good, and the area plan concept is good." Prochaska said of the development which will include 269 single family lots, 451 townhouses which will be sold and 924 garden apartments for rent. Developers told the commission there is a five-year plan for development of the 300-acre parcel. Also, the developer plans to make available 75 units for rental to the Housing Commission. The single family lots will be sold, prices ranging from $7,000 to $10,000. Townhouse prices will be in the $30,000 range, the commission was told, while the apartments will be "rather luxury units." In other business, the commission recommended approval of the annexation of the Glen Steinman property totaling 2.2 acres on Liberty west of Maple but recommended denial of a request for R4C multiple family zoning on the parcel, stating R4B would be a more proper zoning classification.