Survey Finds No Heavy Drug Use At U-M 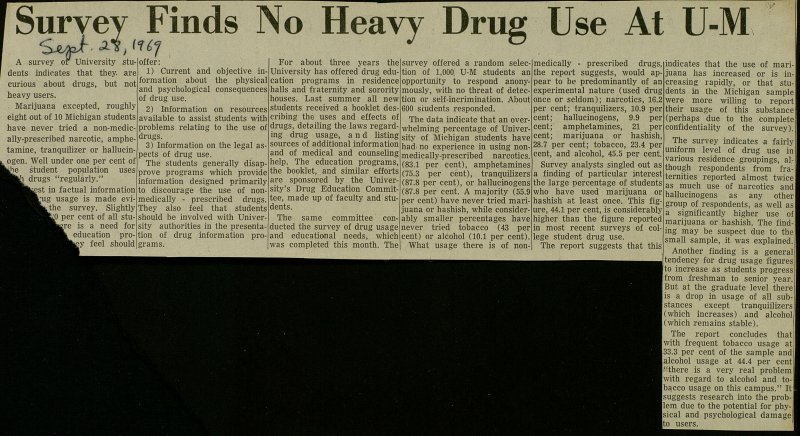 A survey of University students indicates that they. are curious about drugs, but not heavy users. Marijuana excepted, roughly eight out of 10 Michigan students have never tried a non-medically-prescribed narcotic, amphetamine, tranquilizer or hallucinogen. Well under one per cent oí he student population uses i drugs regularly. iest in factual information ;ug usage is made the survey. Slightly per cent of all stuitere is a need for Bk education proHfey feel should r offer: 1) Current and objective information about the physical and psychological consequences of drug use. 2) Information on resources avaüable to assist students with problems relating to the use of drugs. 3) Information on the legal aspects of drug use. The students generally disapprove programs which provide information designed primarily to discourage the use of nonmedically - prescribed drugs. They also feel that students should be involved with University authorities in the presentaiion of drug information programs. For about three years the University has offered drug education programs in residence halls and fraternity and sorority houses. Last summer all new students received a booklet describing the uses and effects of drugs, detailing the laws regarding drug usage, and listing sources of additional information and of medical and counseling help. The education programs, the booklet, and similar efforts are sponsored by the University's Drug Education Committee, made up of faculty and students. The same committee conducted the survey of drug usage and educational needs, which was completed this month. The survey offered a random selecüon of 1,000 U-M students an opportunity to respond anonymously, with no threat of detection or self-incrimination. About 600 students responded. The data indicate that an overwhelming percentage of University of Michigan students have had' no experience in using nonmedically-prescribed narcotics. (83.1 per cent), amphetamines (75.3 per cent), tranquilizers (87.8 per cent), or hallucinogens (87.8 per cent. A majority (55.9 per cent) have never tried marijuana or hashish, while considerably smaller percentages have never tried tobáceo (43 per cent) or alcohol (10.1 per cent). What usage there is of medically - prescribed drugs, the report suggests, would appear to be predominantly of an experimental nature (used drug once or seldom); narcotics, 16.2 per cent; tranquilizers, 10.9 per cent; hailucinogens, 9.9 per cent; amphetamines, 21 per cent; marijuana or hashish, 28.7 per cent; tobáceo, 23.4 per cent, and alcohol, 45.5 per cent. Survey analysts singled out as a finding of particular interest the large percentage of students who have used marijuana or hashish at least once. This figure, 44.1 per cent, is considerably higher than the figure reported in most recent surveys of college student drug use. The report suggests that this indicates that the use of marijuana has increased or is increasing rapidly, or that students in the Michigan sample were more willing to report their usage of this substance (perhaps due to the complete confidentiality of the survey). The survey indicates a fairly uniform level of drug use in various residence groupings, although respondents from fraternities reported almost twice as much use of narcotics and hallucinogens as any other group of respondents, as well as a significantly higher use of marijuana or hashish. The finding may be suspect due to the small sample, it was explained. Another finding is a general tendency for drug usage figures to increase as students progress from freshman to senior year. But at the gradúate level there is a drop in usage of all substances except tranquiilizers (which increases) and alcohol (which remains stable). The report concludes that with frequent tobáceo usage at 33.3 per cent of the sample and alcohol usage at 44.4 per cent "there is a very real probleml with regard to alcohol and to-i bacco usage on this campus." ItJ suggests research into the problem due to the potential for 1 sical and psychological damage to users. - i