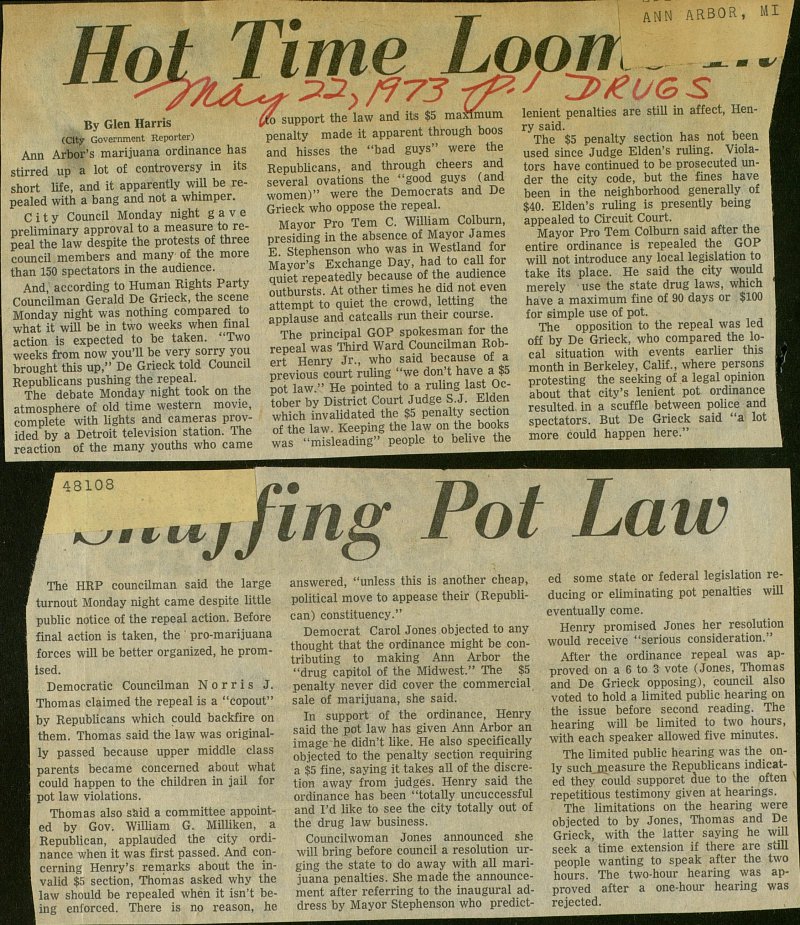 Ann Arbor's marijuana ordinance has stirred up a lot of controversy in its short life, and it apparently will be repealed with a bang and not a whimper. City Council Monday night gave preliminary approval to a measure to repeal the law despite the protests of three council members and many of the more than 150 spectators in the audience. And, according to Human Rights Party Councilman Gerald De Grieck, the scene Monday night was nothing compared to what it will be in two weeks when final action is expected to be taken. "Two weeks from now you'll be very sorry you brought this up," De Grieck told Council Republicans pushing the repeal. The debate Monday night took on the atmosphere of old time western movie, complete with lights and cameras provided by a Detroit television station. The reaction of the many youths who came to support the law and its $5 maixmum penalty made it apparent through boos and hisses the "bad guys" were the Republicans, and through cheers and several ovations the "good guys (and women)" were the Democrats and De Grieck who oppose the repeal. Mayor Pro Tem C. William Colburn, presiding in the absence of Mayor James E Stephenson who was in Westland for Mayor's Exchange Day, had to call for quiet repeatedly because of the audience outbursts. At other times he did not even attempt to quiet the crowd, letting the applause and catcalls run their course. The principal GOP spokesman for the repeal was Third Ward Councilman Robert Henry Jr., who said because of a previous court ruling "we don't have a $5 pot law." He pointed to a ruling last October by District Court Judge S.J. Elden which invalidated the $5 penalty section of the law. Keeping the law on the books was "misleading" people to believe the lenient penalties are still in affect, Henry said. The $5 penalty section has not been used since Judge Elden's ruling. Violators have continued to be prosecuted under the city code, but the fines have been in the neighborhood generally of $40. Elden's ruling is presently being appealed to Circuit Court. Mayor Pro Tem Colburn said after the entire ordinance is repealed the GOP will not introduce any local legislation to take its place. He said the city would merely use the state drug laws, which have a maximum fine of 90 days or $100 for simple use of pot. The opposition to the repeal was led off by De Grieck, who compared the local situation with events earlier this month in Berkeley, Calif., where persons protesting the seeking of a legal opinion about that city's lenient pot ordinance resulted in a scuffle between police and spectators. But De Grieck said "a lot more could happen here." The HRP councilman said the large turnout Monday night carne despite little public notice of the repeal action. Before final action is taken, the ' pro-marijuana forces will be better organized, he promised. Democratic Councilman Norris J. Thomas claimed the repeal is a "copout" by Republicans which could backfire on them. Thomas said the law was originally passed because upper middle class parents became concerned about what could happen to the children in jail for pot law violations. Thomas also said a committee appointed by Gov. William G. Milliken, a Republican, applauded the city ordinance when it was first passed. And concerning Henry's remarks about the invalid $5 section, Thomas asked why the law should be repealed when it isn't being eniorced. There is no reason, he answered, "unless this is another cheap, political move to appease their (Republican) constituency." Democrat Carol Jones objected to any thought that the ordinance might be contributing to making Ann Arbor the "drug capitol of the Midwest." The $5 penalty never did cover the commercial sale of marijuana, she said. In support of the ordinance, Henry said the pot law has given Ann Arbor an imagehe didn't like. He also specifically objected to the penalty section requiring a $5 fine, saying it takes all of the discretion away from judges. Henry said the ordinance has been "totally uncuccessful and I'd like to see the city totally out of the drug law business. Councilwoman Jones announced she will bring before council a resolution urging the state to do away with all marijuana penalties. She made the announcement after referring to the inaugural address by Mayor Stephenson who predicted some state or federal legislation reducing or eliminating pot penalties will eventually come. Henry promised Jones her resolution would receive "serious consideration." After the ordinance repeal was approved on a 6 to 3 vote (Jones, Thomas and De Grieck opposing), council also voted to hold a limited public hearing on the issue before second reading. The hearing will be limited to two hours, with each speaker allowed five minutes. The limited public hearing was the only such measure the Republicans indicated they could supporet due to the often repetitious testimony given at hearings. The limitations on the hearing were objected to by Jones, Thomas and De Grieck, with the latter saying he will seek a time extension if there are still people wanting to speak after the two hours. The two-hour hearing was approved after a one-hour hearing was rejected.