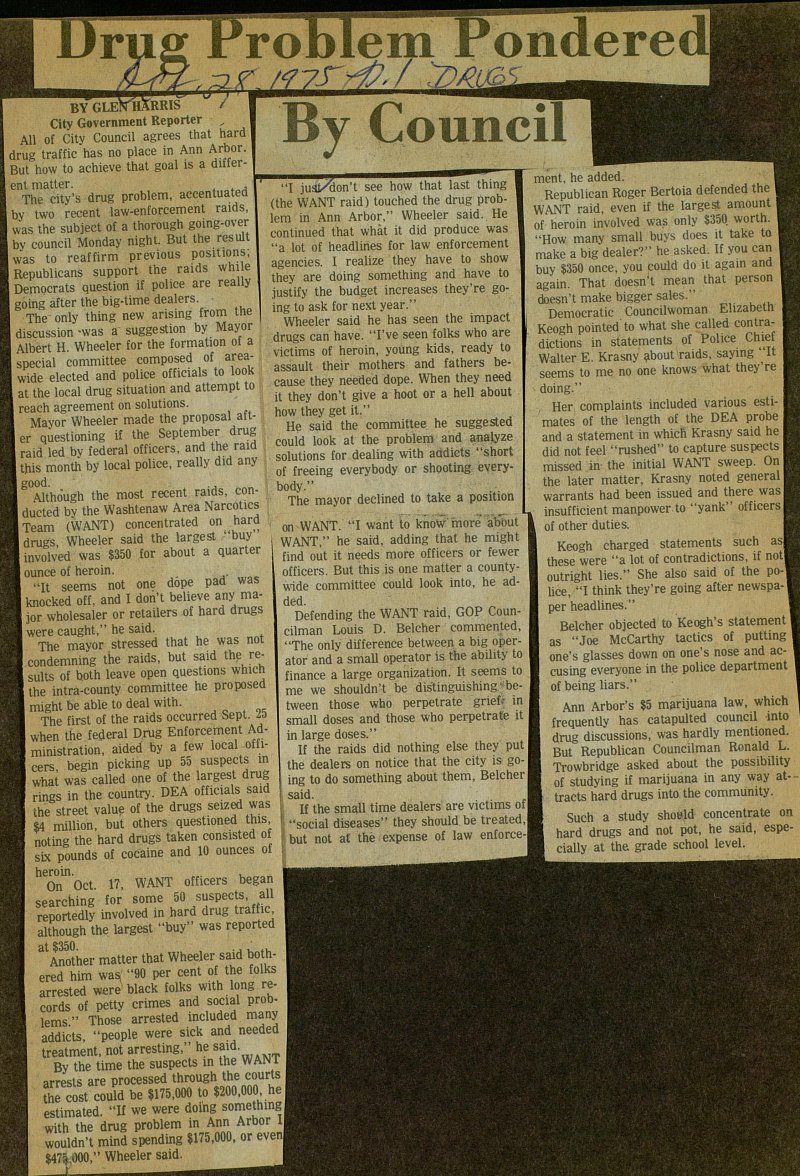 All of City Council agrees that hard drug traffic has no place in Ann Arbor. But how to achieve that goal is a different matter. . , The city's drug problem, accentuateü by two recent law-enforcement raids, was the subject of a thorough going-over by council Monday night. But the result was to reaffirm previous positions; Republicans support the raids whi e Democrats question if pólice are really going after the big-time dealers. ■ The only thing new arising from the discussion -was a" suggestion by Mayor Albert H. Wheeler for the formation of a special committee composed of areawide elected and pólice officials to look at the local drug situation and attempt to reach agreement on solutions. I Mayor Wheeler made the proposal aftler questioning if the September drug I raid led by federal officers, and the raid Ithis month by local pólice, really did any I eood. Althöugh the most recent raías, coniucted by the Washtenaw Area Narcotics Team (WANT) concentrated on hard drugs, Wheeler said the largest "buy involved was $350 for about a quarter ounce of heroin. "It seems not one dope pad was knocked off, and I don't believe any major wholesaler or retailers of hard drugs were caught," he said. The mayor stressed that he was not condemning the raids, but said the resulte of both leave open questions wnich the intra-county committee he proposed mieht be able to deal with. . _ . „ The first of the raids occurred Sept. a when the federal Drug Enforcement Administration, aided by a few local off icers begin picking up 55 suspects in what was called one of the largest drug rings in the country. DEA officials said the street value of the drugs seized was $4 million, but others questioned this, noting the hard drugs taken consisted of six pounds of cocaïne and 10 ounces of enm'0ct 17, WANT officers began searching for some 50 suspects all reportedly involved in hard drug trafhc although the largest "buy" was reported at $350. . ,:'■.,. Another matter that Wheejer saia uoi..ered him was,' "90 per cent of the folks arrested were black folks with long records of petty crimes and social problems" Those arrested included many addicts, "people were sick and needed treatment, not arresting," he said. By the time the suspects in the WAN i arrests are processed through the courts ?he cost could be $175,000 to $200.000 he estimated. "If we were doïng something with the drug problem in Ann Arbor 1 wouldn't mind spending $175,000. or even $475,000," Wheeler said. "I juálaon't see how that last thing (the WANT raid) touched the drug problem in Ann Arbor," Wheeler said. He continued that whát it did produce was "a lot of headlines for law enforcement agencies. I realize they have to show they are doing something and have to justify the budget increases they're going to ask for next year." Wheeler said he has seen the impact drugs can have. 'Tve seen folks who are victims of heroin, young kids, ready to assault their mothers and fathers because they needed dope. When they need it they don't give a hoot or a hell about how they get it." He said the committee he suggested could look at the problem and analyze solutions for dealing with addicts "short of freeing everybody or shooting everyi body." The mayor declined to take a position m WANT. "I want to knoW more about VANT," he said, adding that he might iind out it needs more officers or fewer Dfficers. But this is one matter a countywide committee could look into, he added. Defending the WANT raid, GOP Councilman Louis D. Belcher commented, "The only difference between a big operator and a small operator is the ability to finance a large organization. It seems to me we shouldn't be distinguishing between those who perpétrate grief; in small doses and those who perpétrate it in large doses." If the raids did nothing else they put the dealers on notice that the city is going to do something about them, Belcher said. If the small time dealers are victims of "social diseases" they should be treatedj but not at the expense of law ■ I ment, he added. ■ Republican Roger Bertoia defended the I WANT raid, even if the largest amount I of heroin involved was only $350 worth. I "How many small buys does ít take to I make a big dealer?" he asked. If you can buy $350 once, you could do ít again and again. That doesn't mean that person doesn't make bigger sales." Democratie Councilwoman Ehzabetn Keogh pointed to what she called contradictions in statements of Pólice Chief Walter E. Krasny about raids, saying ' lt seems to me no one knows what they re - doing." , Her complaints included various estimates of the length of the DEA probé and a statement in which Krasny said he did not feel "rushed" to capture suspeets missed the initial WANT sweep. On ;he later matter, Krasny noted general ■ ivarrants had been issued and there was! insufficient manpower to "yank" officersl of other duties. Keogh charged statements such asi these were "a lot of contradictions, ïf notl outright lies." She also said of the po-I lice, "I think they're going after newspa-l per headlines." 1 Belcher objected to Keogh's statement as "Joe McCarthy tactics of putting' one's glasses down on one's nose and accusing everyone in the pólice department of being liars." Ann Arbor's $5 marijuana law, which frequently has catapulted council into drug discussions, was hardly mentioned. But Republican Councilman Ronald L. Trowbridge asked about the possibility of studying if marijuana in any way attracts hard drugs into the community. Such a study shoeld concéntrate on hard drugs and not pot, he said, especially at the grade school Ie vel.