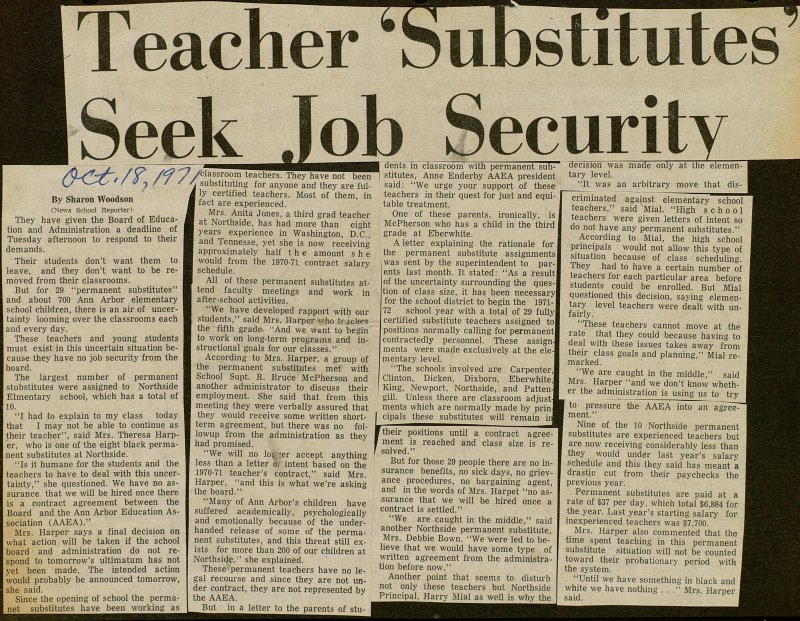 They have given the Board of Education and Administration a deadline of Tuesday afternoon to respond to their demands. Their students don't want them to leave, and they don't want to be moved from their classrooms. But for 29 "permanent substitutes" and about 700 Ann Arbor elementary school children, there is an air of uncertainty looming over the classrooms each and every day. These teachers and young students must exist in this uncertain situation because they have no job security from the board. The largest number of permanent substitutes were assigned to Northside Elementary school, which has a total of 10. "I had to explain to my class today I that I may not be able to continue as I their teacher", said Mrs. Theresa Harper, who is one of the eight black I nent substitutes at Northside. "Is it humane for the students and the teachers to have to deal with this uncertainty," she questioned. We have no assurance that we will be hired once there is a contract agreement between the Board and the Ann Arbor Education Association (AAEA)." Mrs. Harper says a final decision on what action will be taken if the school board and administration do not respond to tomorrow's ultimatum has not yet been made. The intended action would probably be announced tomorrow, she said. Since the opening of school the permanent substitutes have been working as classroom teachers. They have not been ; substituting for anyone and they are fully certified teachers. Most of them, in fact are experienced. Mrs. Anita Jones, a third grad teacher at Northside, has had more than eight years experience in Washington, D.C., and Tennessee, yet she is now receiving approximately half the amount she would from the 1970-71 contract salary schedule. All of these permanent substitutes attend faculty meetings and work in after-school activities. "We have developed rapport with our students," said Mrs. Harper who teaches the fifth grade: "And we want to begin to work on long-term programs and instructional goals for our classes." According to Mrs. Harper, a group of the permanent substitutes met with School Supt. R. Bruce McPherson and another administrator to discuss their employment. She said that from this meeting they were verbally assured that they would receive some written I term agreement, but there was no followup from the administration as they I TlaH nrnmicorl "We will no lo;er accept anything less than a letter oi intent based on the 1970-71 teacher's contract," said Mrs. Harper, "and this is what we're asking the board." "Many of Ann Arbor's children have suffered academically, psychologically and emotionally because of the underhanded release of some of the permanent substitutes, and this threat still exists for more than 200 of our children at Northside," she explained. These permanent teachers have no legal recourse and since they are not under contract, they are not represented bv the AAEA. But in a letter to the parents of stu - - - - I dents in classroom with permanent substitutes, Anne Enderby AAEA president said: "We urge your support of these teachers in their quest for just and equitable treatment. One of these parents, ironically, is McPherson who has a child in the third grade at Eberwhite. A letter explaining the rationale for the permanent substitute assignments was sent by the superintendent to parents last month. It stated: "As a result of the uncertainty surrounding the question of class size, it has been necessary for the school district to begin the 197172 school year with a total of 29 fullyl certified substitute teachers assigned to positions normally calling for permanent contractedly personnel. These assignJ ments were made exclusively at the eleJ elementary level. "The schools involved are Carpenter, Clinton, Dicken, Dixboro, EberwhiteJ King, Newport, Northside, and Pattengill. Unless there are classroom adjust-l meets which are normally made by prinl cipals these substitutes will remain iiJ f their positions until a contract agreef ment is reached and class size is resolved." But for those 29 people there are no insurance benefits, no sick days, no grievance procedures, no bargaining agent, and in the words of Mrs. Harper "no assurance that we will be hired once a contract is settled." "We are caught in the middle," said another Northside permanent substitute, Mrs. Debbie Bown. "We were led to believe that we would have some type of I written agreement from the administration bef ore now." Another point that seems to disturb not only these teachers but Northside Principal, Harry Mial as well is why the 1 decisión was made only at the elementary level. "It was an arbitrary move that disj enminated against elementary school teachers," said 'Mial. "High school I teachers were given letters of intent so do not have any permanent substitutes." According to Mial, the high school principáis would not allow this type of situation because of class scheduling. They had to have a certain number of teachers for each particular área before students could be enrolled. But Mial questioned this decisión, saying elementary level teachers were dealt with unfairly. "These teachers cannot move at the rate that they could because having to deal with these issues takes away from their class goals and planning," Mial remarked. "We are caught in the middle," said Mrs. Harper "and we don't know whether the administration is using us to try to pressure the AAEA into an agreement." Nine of the 10 Northside permanent substitutes are experienced teachers but are now receiving considerably less than they would under last year's salary schedule and this they said has meant a drastic cut from their paychecks the previous year. Permanent substitutes are paid at a rate of $37 per day, which total $6,884 for the year. Last year's starting salary for inexperienced teachers was $7,700. Mrs. Harper also commented that the time spent teaching in this permanent substitute situation will not be counted toward their probationary period with i the system. "Until we have something in black and white we have nothing ..." Mrs Harper I said.