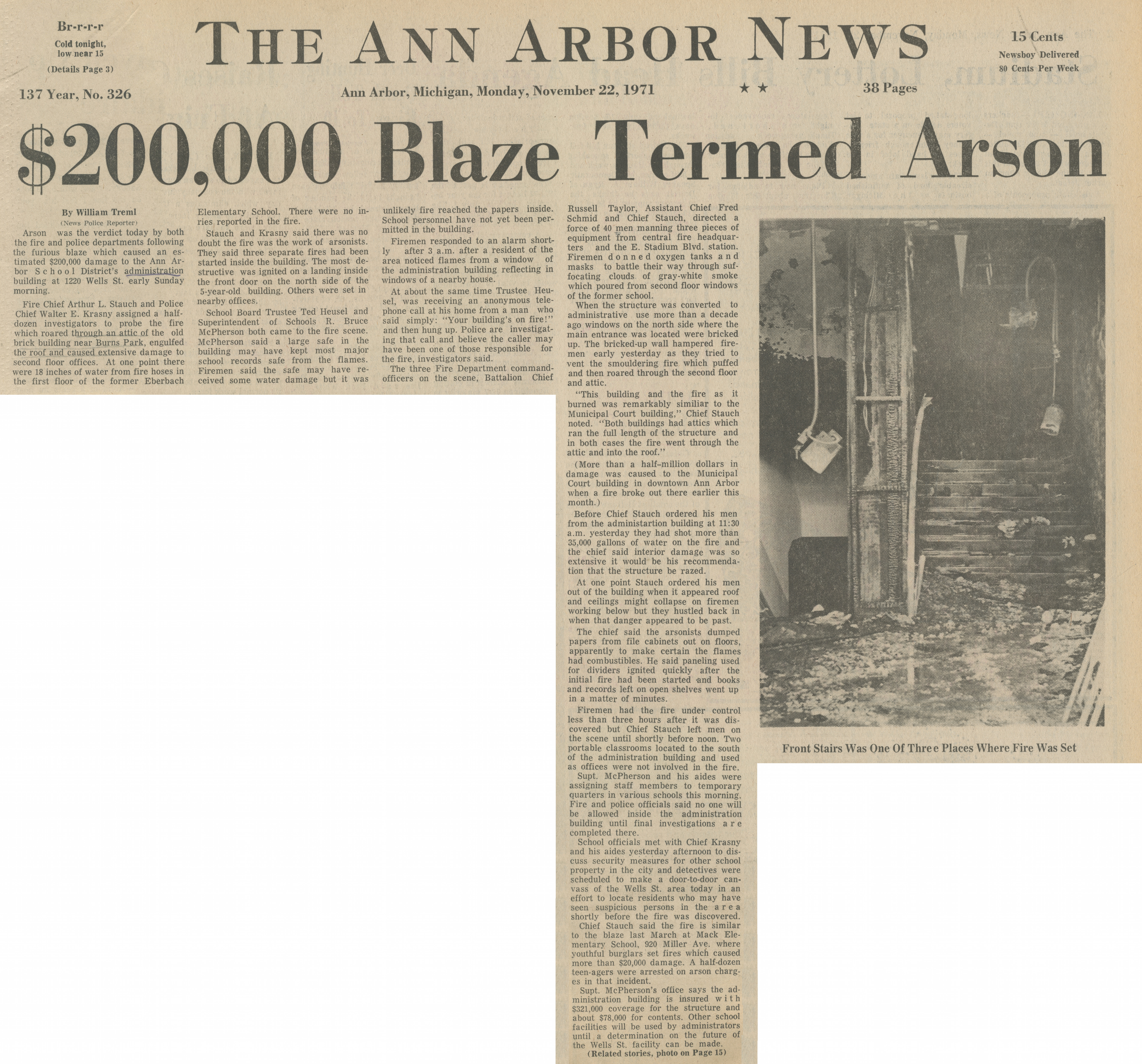 Arson was the verdict today by both i the fire and pólice departments following the furious blaze which caused an estimated $200,000 damage to the Ann Arbor School District's administration building at 1220 Wells St. early Sunday morning. Fire Chief Arthur L. Stauch and Pólice Chief Walter E. Krasny assigned a halfdozen investigators to probe the fire which roared through an attic of the old brick building near Burns Park, engulfed the roof and caused extensive damage to second floor offices. At one point there were 18 inches of water from fire hoses in the first floor of the former Eberbach Eleméntary School. There were no injuries reported in the fire. Stauch and Krasny said there was no doubt the fire was the work of arsonists. They said three separate fires had been started inside the building. The most destructive was ignited on a landing inside the front door on the north side of the 55-year-old building. Others were set in nearby offices. School Board Trustee Ted Heusel and Superintendent of Schools R. Bruce McPherson both came to the fire scène. McPherson said a large safe in the building may have kept most major school records safe from the ñames. Fircmen said the safe may have re, ceived some water damage but it was unlikely ñre reached the papers inside. School personnel have not yet been permitted in the building. Firemen responded to an alarm shortly after 3 a.m. after a resident of the área noticed ñames from a window of the administration building reflecting in windows of a nearby house. At about the same time Trustee Heusel, was receiving an anonymous telephone cali at his home from a man who said simply: "Your building's on fire!" and then hung up. Pólice are investigating that cali and believe the caller may have been one of those responsible for the fire, investigators said.. The three Fire Department commandofficers on the scène, Battalion Chief Russell Taylor, Assistant Chief Fred Schmid and Chief Stauch, directed a forcé of 40 men manning three pieces of equipment from central fire headquarters and the E. Stadium Blvd. station. Firemen d o n n e d oxygen tanks and masks tq battle their way through suffocating clouds of gray-white smoke which poured from second floor windows of the former school. When the structure was converted to administrative use more than a decade ago windows on the north side where the main entrance was located were bricked I up. The bricked-up wall hampered tiremen early yesterday as they tried to vent the smouldering fire which puffed and then roared through the second floor and attic. "This building and the fire as ït burned was remarkably similiar to the Municipal Court building," Chief Stauch noted "Both buildings had attics which ran the iull length of the structure and in both cases the fire went through the attic and into the roof." (More than a half-million dollars in damage was causecl to the Municipal Court building in downtown Ann Arbor when a fire broke out there earlier this month.) , . Before Chief Stauch ordered his men from the administartion building at 11:30 a m. yesterday they had shot more than 35 000 gallons of water on the fire and the chief said interior damage was so extensive it would be his recommendation that the structure be razed. At one point Stauch ordered his men. (over please) $200,000 : ( continued) out of the building when it appeared roof and ceilings might collapse on firemen working below but they hustled back in when that danger appeared to be past. The chief said the arsonists dumped papers from file cabinets out on floors, apparently to make certain the flames had combustibles. He said paneling used for dividers ignited quickly after the initial fire had been started and books and records left on open shelves went up I in a matter of minutes. Firemen had the fire under control I less than three hours after it was discovered but Chief Stauch left men on the scène until shortly before noon. Two portable classrooms located to the south I of the administration building and used as offices were not involved in the fire. Supt. McPherson and his aides were assigning staff members to temporary quarters in various schools this morning. Fire and pólice officials said no one will I be allowed inside the administration I building until final investigations are completed there. School officials met with Chief Krasny and his aides yesterday afternoon to discuss security measures for other school property in the city and detectives were scheduled to make a door-to-door canvass of the Wells St. area today in an offort.to lócate residents who may have seen suspicious persons in the area shortly before the fire was discovered. Chief Stauch said the fire is similar to the blaze last March at Mack Elementary School, 920 Miller Ave. where youthful burglars set fires which caused more than $20,000 damage. A half-dozen teen-agers were arrested on arson charges in that incident. Supt. McPherson's office says the administration building is insured with $321,000 coverage for the structure and about $78,000 for contents. Other school facilities will be used by administrators until a determination on the future of the Wells St. facility can be made.