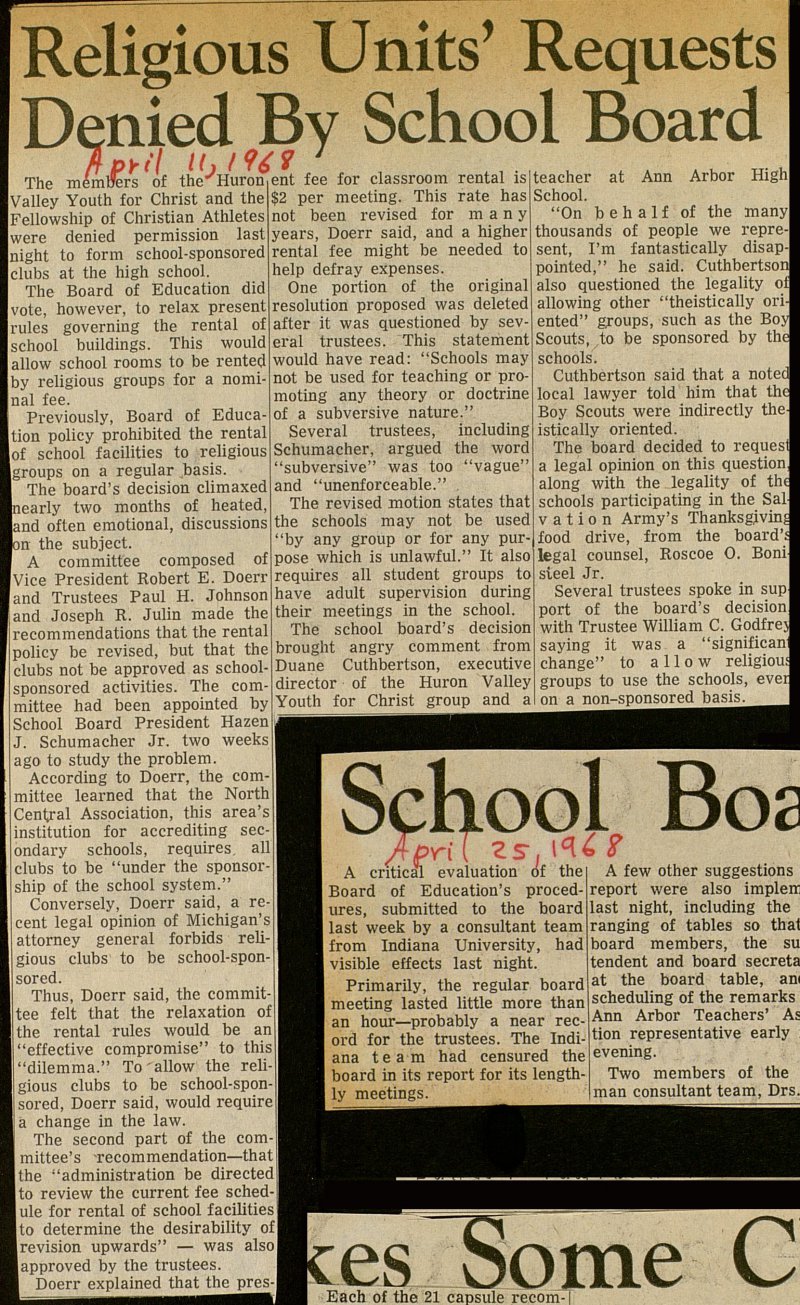 The mêmllers of theHuron Valley Youth for Christ and the Fellowship of Christian Athletes were denied permission last night to form school-sponsored clubs at the high school. The Board of Education did vote, however, to relax present rules governing the rental of school buildings. This would allow school rooms to be rented by religious groups for a nominal fee. Previously, Board of Education policy prohibited the rental of school facilities to religious igroups on a regular basis. The board's decisión climaxed mearly two months of heated, [and often emotional, discussions kn the subject. A committee composed of IVice President Robert E. Doerr and Trustees Paul H. Johnson and Joseph R. Julin made the recommendations that the rental policy be revised, but that the clubs not be approved as schoolsponsored activities. The committee had been appointed by School Board President Hazen J. Schumacher Jr. two weeks ago to study the problem. According to Doerr, the committee learned that the North Central Association, this area's institution for accrediting secondary schools, requires. all clubs to be "under the sponsorship of the school system." Conversely, Doerr said, a recent legal opinión of Michigan's attorney general forbids religious clubs to be school-sponsored. Thus, Doerr said, the committee feit that the relaxation of the rental rules would be an "effective compromise" to this "dilemma." Toallow the religious clubs to be school-sponsored, Doerr said, would require á chanse in the law. The second part of the committee's recommendation- that the "administration be directed to review the current fee schedule for rental of school facilities Ito determine the desirability of I revisión upwards" - was also approved by the trustees. Doerr explained that ent fee for classroom rental is $2 per meeting. This rate has not been revised for m a n y years, Doerr said, and a higher rental fee might be needed to help defray expenses. One portion of the original resolution proposed was deleted after it was questioned by several trustees. This statement would have read: "Schools may not be used for teaching or promoting any theory or doctrine of a subversive nature." Several trustees, including Schumacher, argued the word "subversive" was too "vague" and "unenforceable." The revised motion states that the schools may not be used "by any group or for any purpose which is unlawful." It also requires all student groups to have adult supervisión during their meetings in the school. The school board' s decisión brought angry comment from Duane Cuthbertson, executive director of the Huron Valley Youth for Christ group and a teacher at Ann Arbor High School. "On b e h a 1 f of the many thousands of people we represent, I'm fantastically disappointed," he said. Cuthbertsom also questioned the legality oí allowing other "theistically oriJ ented" groups, such as the Boy Scouts, to be sponsored by the schools. Cuthbertson said that a noted local lawyer told him that the Boy Scouts were indirectly the istically oriented. The board decided to requesl a legal opinión on this question along with the legality of the schools participating in the Sal v a t i o n Army's Thanksgjvind food drive, from the board's legal counsel, Roscoe O. Boni sieel Jr. Several trustees spoke in sup port of the board's decisión with Trustee William C. Godfre saying it was a "significad change" to allow religiouj groups to use the schools, ever on a non-sponsored basis.