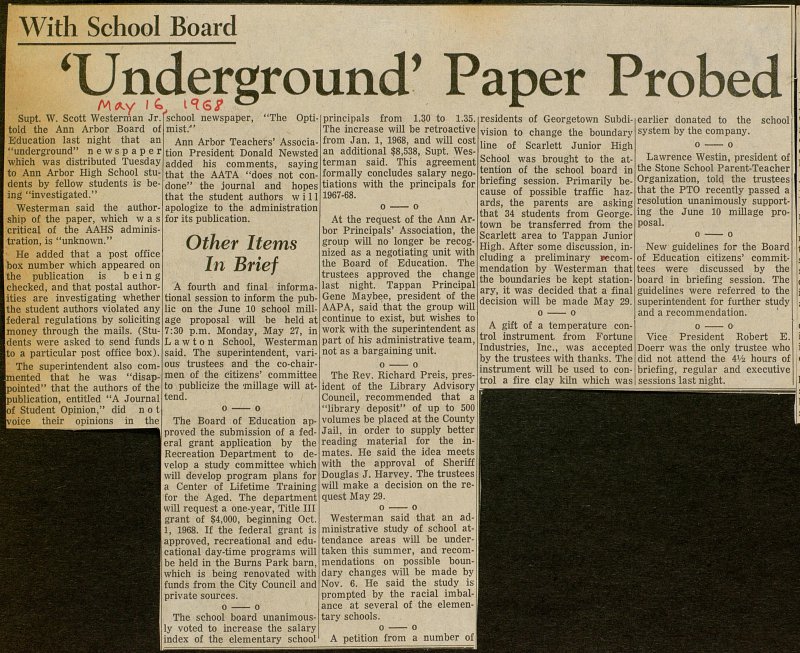 Supt. W. Scott Westerman Jr. told the Ann Arbor Board of Education last night that an "underground" newspaper which was distributed Tuesday to Ann Arbor High School students by fellow students is being "investigated." Westerman said the authorship of the paper, which was critical of the AAHS administration, is "unknown." He added that a post office box number which appeared on the publication is b e i n g checked, and that postal authorities are investigating whether the student authors violated any federal regulations by soliciting money through the mails. (Students were asked to send funds to a particular post office box). The superintendent also commented that he was "disappointed" that the authors of the publication, entitled "A Journal of Student Opinión," did n o t ivoice their opinions in the school newspaper, "The Optimist.'" Ann Arbor Teachers' Association President Donald Newsted added his comments, saying that the A ATA "does not condone" the journal and hopes that the student authors w i 1 1 apologize to the administration for its public ation. Other Items In Brief A fourth and final informational session to inform the public on the June 10 school millage proposal will be held at 7:30 p.m. Monday, May 27, in Lawton School, Westerman said. The superintendent, various trustees and the co-chairmen of the citizens' committee to publicize the millage will attend. o o The Board of Education approved the submission of a federal grant application by the Recreation Department to develop a study committee which will develop program plans for a Center of Lifetime Training Eor the Aged. The department will request a one-year, Title III grant of $4,000, beginning Oct. 1, 1968. If the federal grant is approved, recreational and educational day-time programs will be held in the Burns Park barn, which is being renovated with funds from the City Council and private sources. o o The school board unanimously voted to increase the salary index of the elementary school principáis from 1.30 to 1.35. The increase will be retroactive from Jan. 1, 1968, and will cost an additional $8,538, Supt. Westerman said. This agreement formally concludes salary negotiations with the principáis for 1967-68. o o At the request of the Ann Arbor Principáis' Association, the group will no longer be recognized as a negotiating unit with the Board of Education. The trustees approved the change last night. Tappan Principal Gene Maybee, president of the AAPA, said that the group will continue to exist, but wishes to work with the superintendent as part of his administrative team, not as a bargaining unit. o o The Rev. Richard Preis, president of the Library Advisory Council, recommended that a "library deposit" of up to 500 volumes be placed at the County Jail, in order to supply better reading material for the inmates. He said the idea meets with the approval of Sheriff Douglas J. Harvey. The trustees will make a decisión on the request May 29. o o Westerman said that an administrative study of school attendance áreas will be undertaken this summer, and recommendations on possible boundary changes will be made by Nov. 6. He said the study is prompted by the racial imbalance at several of the 1 tary schools. o o A petition from a number of I residents of Georgetown Subdivisión to change the boundary line of Scarlett Junior High School was brought to the attention of the school board in briefing session. Primarily because of possible traffic hazards, the parents are asking that 34 students from Georgetown be transferred fram the Scarlett area to Tappan Junior High. Aftér some discussion, including a preliminary secommendation by Westerman that the boundaries be kept stationary, it was decided that a final decisión will be made May 29. o o A gift of a temperature control instrument, from Fortune Industries, Inc., was accepted by the trustees with thanks. The instrument will be used to control a fire clay kiln which was earlier donated to the school system by the company. o o Lawrence Westin, president of the Stone School Parent-Teacher Organization, told the trustees that the PTO recently passed a resolution unanimously supporting the June 10 millage proposal. o o New guidelines for the Board of Education citizens' committees were discussed by the board in briefing session. The guidelines were referred to the superintendent for further study and a recommendation. o o Vice President Robert E. Doerr was the only trustee who did not attend the 4'2 hours of briefing, regular and executive sessions last night.