Over 500 Attend Board Meeting Because Of High School Incidents 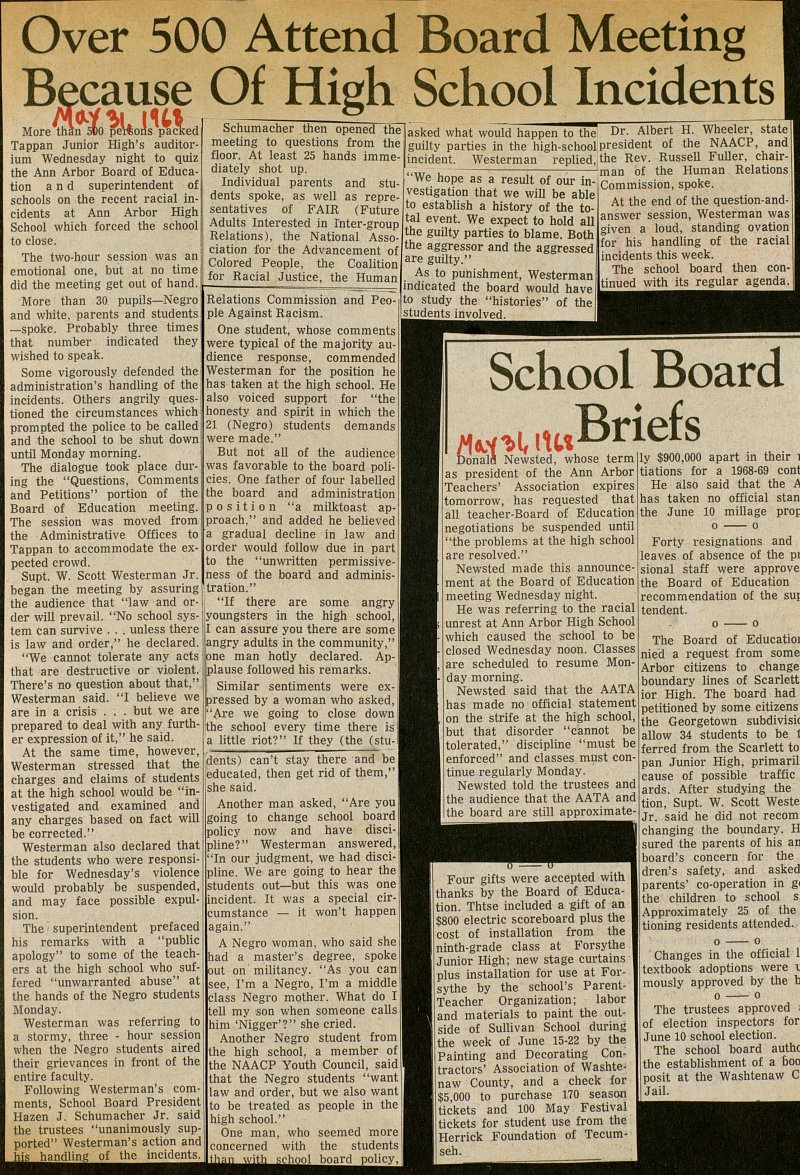 More than 5110 peYloñs packed Tappan Junior High's auditorium Wednesday night to quiz the Ann Arbor Board of Education and superintendent of schools on the recent racial incidents at Ann Arbor High School which forced the school to close. The two-hour session was anj emotional one, but at no time did the meeting get out of hand. More than 30 pupils- Negro and white, parents and students - spoke. Probably three times that number indicated they wished to speak. Some vigorously defended the administration's handling of the incidents. Others angrily questioned the circumstances which prompted the pólice to be called and the school to be shut down until Monday morning. The dialogue took place during the "Questions, Comments and Petitions" portion of the Board of Education meeting. The session was moved from the Administrative Offices to Tappan to accommodate the expected crowd. Supt. W. Scott Westerman Jr. began the meeting by assuring the audience that "law and order will prevail. "No school system can survive . . . unless there is law and order," he declared. "We cannot tolérate any acts that are destructive or violent. There's no question about that," Westerman said. "I believe we are in a crisis . . . but we are prepared to deal with any further expression of it," he said. At the same time, however, Westerman stressed that the charges and claims of students at the high school would be "investigated and examined and any charges based on fact will be corrected." Westerman also declared that the students who were responsible for Wednesday's violence would probably be suspended, and may face possible expulsión. The superintendent prefaced his remarks with a "public apology" to some of the teachers at the high school who suffered "unwarranted abuse" at the hands of the Negro students Monday. Westerman was referring to a stormy, three - hour session when the Negro students aired their grievances in front of the entire faculty. Following Westerman's comments, School Board President Hazen J. Schumacher Jr. said the trustees "unanimously supported" Westerman's action and his handling of the incidents. Schumacher then opened the meeting to questions from the floor. At least 25 hands immediately shot up. Individual parents and students spoke, as well as representatives of FAIR (Future Adults Interested in Inter-group Relations), the National Association for the Advancement of Colored People, the Coalition for Racial Justice, the Human Relations Commission and Peo-i 3le Against Racism. One student, whose comments were typical of the majority audience response, commended Westerman for the position he has taken at the high school. He also voiced support for "the ïonesty and spirit in which the 21 (Negro) students demands were made." But not all of the audience was favorable to the board policies. One father of four labelled he board and administration position "a milktoast approach," and added he believed a gradual decline in law and order would follow due in part o the "unwritten permissiveness of the board and administration." "If there are some angry youngsters in the high school,! can assuré you there are some II angry adults in the community," I one man hotly declared. 1 plause followed his remarks. Similar sentiments were ex-J jressed by a woman who asked, I "Are we going to close down I he school every time there isl a little riot?" If they (the (stu-1 dents) can't stay there and bel educated, then get rid of them,"l she said. Another man asked, "Are youl going to change school board I policy now and have disci-lj pline?" Westerman answeredjl "In our judgment, we had disci-j pline. We are going to hear thel students out- but this was one incident. It was a special circumstance - it won't happen again." A Negro woman, who said she had a master's degree, spoke out on militancy. "As you can see, I'm a Negro, I'm a middle class Negro mother. What do I teil my son when someone calis him 'Nigger'?" she cried. Another Negro student from the high school, a member of the NAACP Youth Council, said that the Negro students "want law and order, but we also want to be treated as people in the high school." One man, who seemed more concerned with the students tlian_witli. school board policy, asked what would happen to the guilty parties in the high-sehool incident. Westerman replied, "We hope as a result of our investigation that we will be able to establish a history of the total event. We expect to hold all :he guilty parties to blame. Both the aggressor and the aggressed are guilty." As to punishment, Westerman ndicated the board would have o study the "histories" of the students involved. Dr. Albert H. Wheeler, state president of the NAACP, and the Rev. Russell Fuller, chairman of the Human Relations Commission, spoke. At the end of the question-andanswer session, Westerman was given a loud, standing ovation for his handling of the racial incidents this week. The school board then continued with its regular agenda.