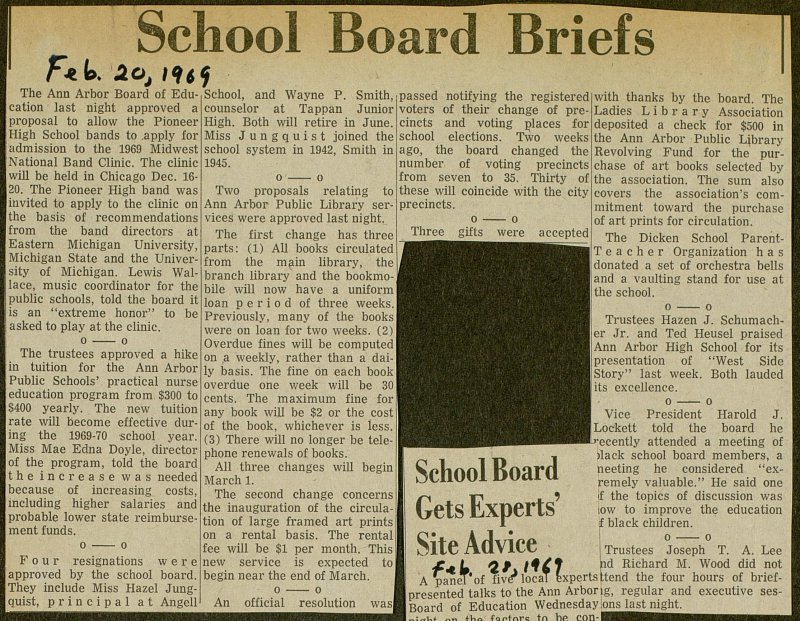 The Ann Arbor Board of Education last night approved a proposal to allow the Pioneer High School bands to .apply for admission to the 1969 Midwest National Band Clinic. The clinic will be held in Chicago Dec. 1620. The Pioneer High band was invited to apply to the clinic on the basis of recommendations from the band directors at Eastern Michigan University, Michigan State and the University of Michigan. Le wis Wallace, music coördinator for the public schools, told the board it is an "extreme honor" to be asked to play at the clinic. o o The trustees approved a hike in tuition for the Ann Arbor Public Schools' practical nurse education program from $300 to $400 yearly. The new tuition rate will become effective during the 1969-70 school year. Miss Mae Edna Doyle, director of the program, told the board the increase was needed because of increasing costs, including higher salaries and probable lower state reimbursement funds. o o F o u r resignations w e r e approved by the school board. They include Miss Hazel Jungquist, principal at Angelí School, and Wayne P. Smith, counselor at Tappan Junior High. Both will retire in June. Miss Jungquist joined the school system in 1942, Smith in 1945. o o Two proposals relating to Ann Arbor Public Library services were approved last night. The first change has three parts: (1) All books circulated from the main library, the branch library and the bookmobile will now have a uniform loan period of three weeks. Previously, many of the books were on loan for two weeks. (2) Overdue fines will be computed on a weekly, rather than a daily basis. The fine on each book overdue one week will be 30 cents. The maximum fine for any book wil! be $2 or the cost of the book, whichever is less. (3) There will no longer be telephone rene wals of books. All three changes will begin March 1. The second change concerns the inauguration of the Ij tion of large framed art prints on a rental basis. The rental fee will be $1 per month. This new service is expected tol begin near the end of March. I o o I An official resolution wasl passed notifying the registered voters of their change of precincts and voting places for school elections. Two weeks ago, the board changed the number of voting precincts from seven to 35. Thirty of these will coincide with the city precincts. o o Three gifts were accepted with thanks by the board. The Ladies L i b r a r y Association deposited a check for $500 in the Ann Arbor Public Library Revolving Fund for the purchase of art books selected by the association. The sum also covers the association's commitment toward the purchase of art prints for circulation. The Dicken School ParentTeacher Organization has donated a set of orchestra bells and a vaulting stand for use at the school. o o Trustees Hazen J. Schumacher Jr. and Ted Heusel praised Ann Arbor High School for its presentation of "West Side Story" last week. Both lauded its excellence. o o Vice President Harold J. Lockett told the board he -recently attended a meeting of )lack school board members, a neeting he considered "exremely valuable." He said one if the topics of discussion was iow to improve the education f black children. u u Trustees Joseph T. A. Lee id Richard M. Wood did not :tend the four hours of briefig, regular and executive sesons last night.