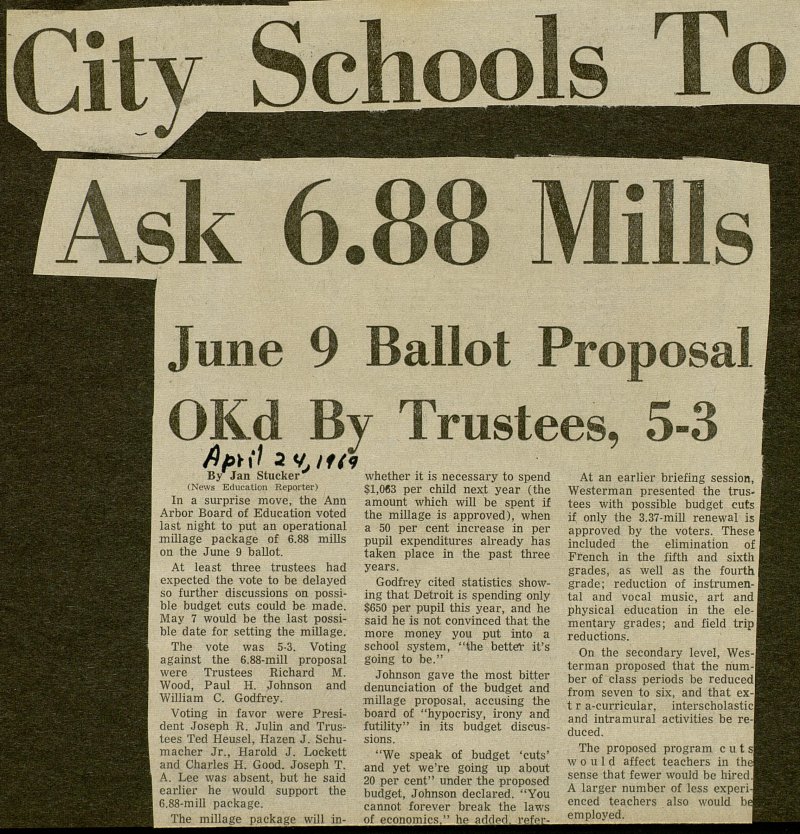 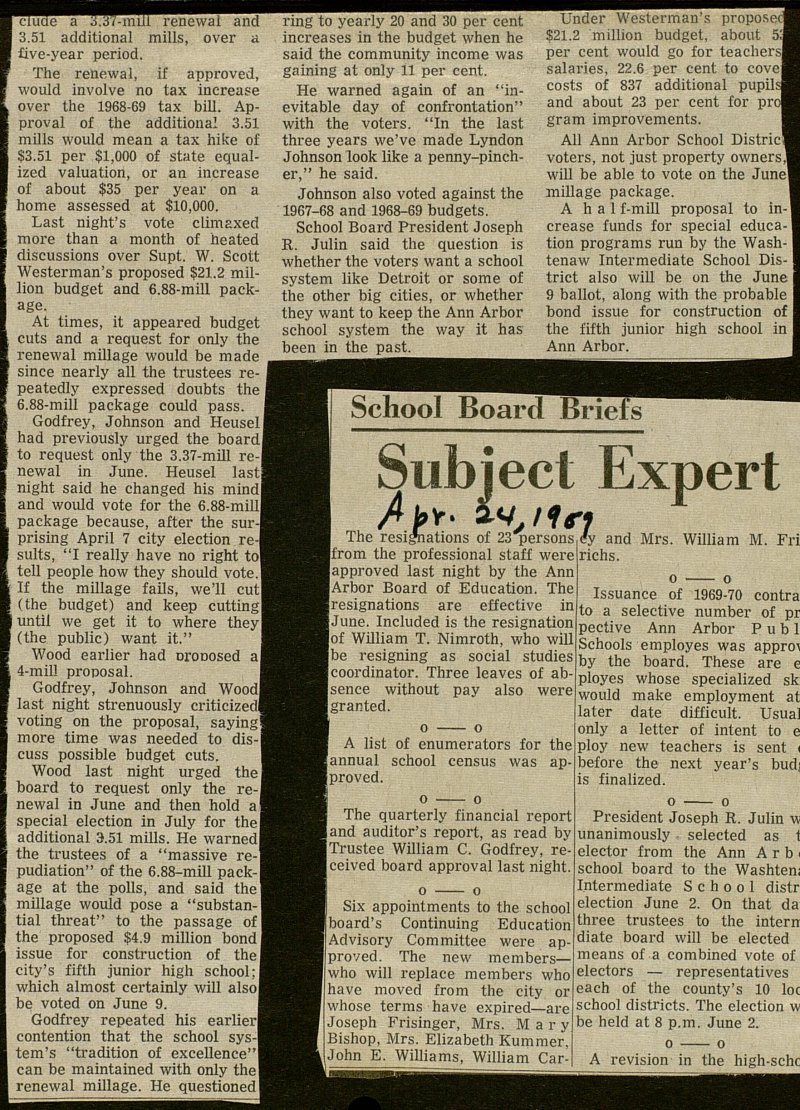 In a surprise move, the Ann Arbor Board of Education voted last night to put an operational millage package of 6.88 milis on the June 9 ballot. At least three trustees had expected the vote to be delayed so further discussions on possible budget cuts could be made. May 7 would be the last possible date for setting the millage. The vote was 5-3. Voting against the 6.88-mill proposal were Trustees Richard M. Wood, Paul H. Johnson and William C. Godfrey. Voting in favor were President Joseph R. Julin and Trustees Ted Heusel, Hazen J. Schumacher Jr., Harold J. Lockett and Charles H. Good. Joseph T. A. Lee was absent, but he said earlier he would support the 6.88-mill package. The millage package will include a 3.37-milt renewal and I 3.51 additional milis, over a five-year period. The renewal, if approved, would involve no tax increase over the 1968-69 tax bilí. Approval of the additional 3.51 milis would mean a tax hike of $3.51 per $1,000 of state equalized valuation, or an increase of about $35 per year on a home assessed at $10,000. Last night's vote climaxed more than a month of heated discussions over Supt. W. Scott Westerman's proposed $21.2 million budget and 6.88-mill package. At times, it appeared budget cuts and a request for only the renewal millage would be made since nearly all the trustees repeatedly expressed doubts the 6.88-mill package could pass. Godfrey, Johnson and Heusel had previously urged the board to request only the 3.37-mill renewal in June. Heusel last night said he changed his mind and would vote for the 6.88-mill package because, after the surprising April 7 city election results, "I really have no right tol teil people how they should vote. If the millage fails, we'll cut (the budget) and keep cutting until we get it to where they (the public) want it." Wood earlier had nroDosed a I 4-mil! proposal. Godfrey, Johnson and Wood last night strenuously criticized voting on the proposal, saying more time was needed to discuss possible budget cuts. Wood last night urged the board to request only the renewal in June and then hold al special election in July for thel additional 3.51 milis. He warned the trustees of a "massive re- pudiation" of the 6.88-mill package at the polls, and said the] millage would pose a "substantial threat" to the passage of the proposed $4.9 million bond issue for construction of the city's fifth junior high school;! which almost certainly will also be voted on June 9. Godfrey repeated his earlier contention that the school system's "tradition of excellence"! can be maintained with only the renewal millage. He questioned whether it is necessary to spend $1,063 per child next year (the amount which will be spent if the millage is approved), when a 50 per cent increase in per pupil expenditures already has taken place in the past three years. Godfrey cited statistics showing that Detroit is spending only $650 per pupil this year, and he said he is not convinced that the more money you put into a school system, "the better it's going to be." Johnson gave the most bitter denunciation of the budget and millage proposal, accusing the board of "hypocrisy, irony and futility" in its budget discussions. "We speak of budget 'cuts' and yet we're going up about 20 per cent" under the proposed budget, Johnson declared. "You cannot forever break the laws of economics," he added, refer ring to yearly 20 and 30 per cent increases in the budget when he said the community income was gaining at only 11 per cent. He warned again of an "inevitable day of confrontation" with the voters. "In the last three years we've made Lyndon Johnson look like a penny-pincher," he said. Johnson also voted against the 1967-68 and 1968-69 budgets. School Board President Joseph R. Julin said the question is whether the voters want a school system like Detroit or some of the other big cities, or whether they want to keep the Ann Arbor school system the way it has been in the past.
At an earlier briefing session, Westerman presented the trustees with possible budget cuts if only the 3.37-mill renewal is approved by the voters. These included the elimination of French in the fifth and sixth grades, as well as the fourth grade; reduction of instrumental and vocal music, art and physical education in the elementary grades; and field trip reductions. On the secondary level, Westerman proposed that the number of class periods be reduced from seven to six, and that extra-curricular, interscholastic and intramural activities be reduced. The proposed program cuts would affect teachers in the sense that fewer would be hired. A larger number of less experienced teachers also would be employed.
Under Westerman's proposecï $21.2 million budget, about 5:1 per cent would go for teachers salaries, 22.6 per cent to cove costs of 837 additional pupils and about 23 per cent for program improvements. All Ann Arbor School District voters, not just property owners will be able to vote on the June millage package. A half-mill proposal to increase funds for special education programs run by the Washtenaw Intermedíate School District also will be on the June 9 ballot, along with the probable bond issue for construction of the fifth junior high school in Ann Arbor.