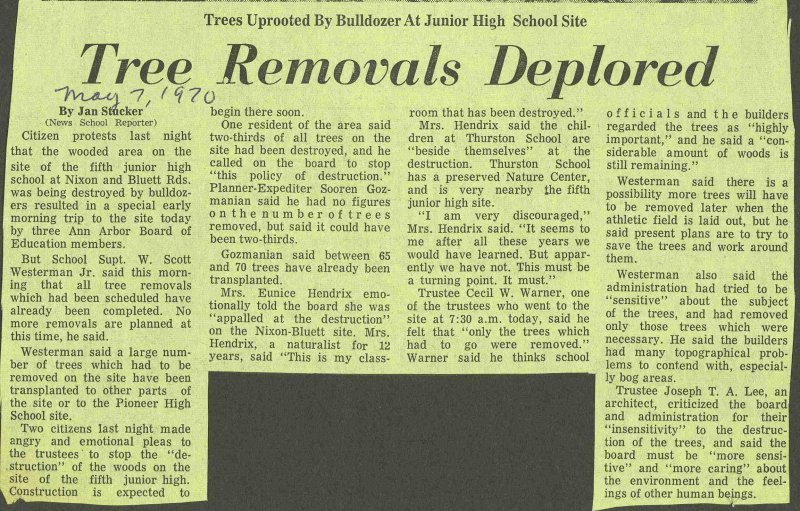 Citizen protests last night that the wooded area on the site of the fifth junior high school at Nixon and Bluett Rds. was being destroyed by bulldozers resulted in a special early morning trip to the site today by three Ann Arbor Board of Education members. But School Supt. W. Scott Westerman Jr. said this morning that all tree remováis which had been scheduled have already been completed. No more remováis are planned at this time, he said. Westerman said a large number of trees which had to be removed on the site have been transplanted to other parts of the site or to the Pioneer High School site. Two citizens last night made angry and emotional pleas to the trustees ' to stop the "destruction" of the woods on the site of the fifth junior high. Construction is expected to begin there soon. One resident of the area said two-thirds of all trees on the site had been destroyed, and he called on the board to stop "this policy of destruction." Planner-Expediter Sooren Gozmanian said he had no figures on the number of trees removed, but said it could have been two-thirds. Gozmanian said between 65 and 70 trees have already been transplanted. Mrs. Eunice Hendrix emotionally told the board she was "appalled at the destruction" on the Nixon-Bluett site. Mrs. Hendrix, a naturalist for 12 years, said "This is my room that has been destroyed." Mrs. Hendrix said the children at Thurston School are "beside themselves" at the destruction. Thurston School has a preserved Nature Center, and is very nearby the fifth junior high site. "I am very discouraged," Mrs. Hendrix said. "It seems to me after all these years we would have learned. But apparently we have not. This must be a turning point. It must." Trustee Cecil W. Warner, one of the trustees who went to the site at 7:30 a.m. today, said he feit that "only the trees which had to go were removed." Warner said he thinks school officials and the builders regarded the trees as "highly important," and he said a "considerable amount of woods is stillremaining." Westerman said there is a possibility more trees will have to be removed later when the athletic field is laid out, but he said present plans are to try to save the trees and work around them. Westerman also said thé administration had tried to be "sensitive" about the subject of the trees, and had removed only those trees which were necessary. He said the builders had many topographical 1 lems to cont.end with, especially bog areas. Trustee Joseph T. A. Lee, anj architect, criticized the board I and administration for theirl "insensitivity" to the destruc-l tion of the trees, and said thel board must be "more sensi-l tive" and "more caring" aboutl the environment and the feel-l ings of other human beings.