Barhydt, Wright, Israel On Board 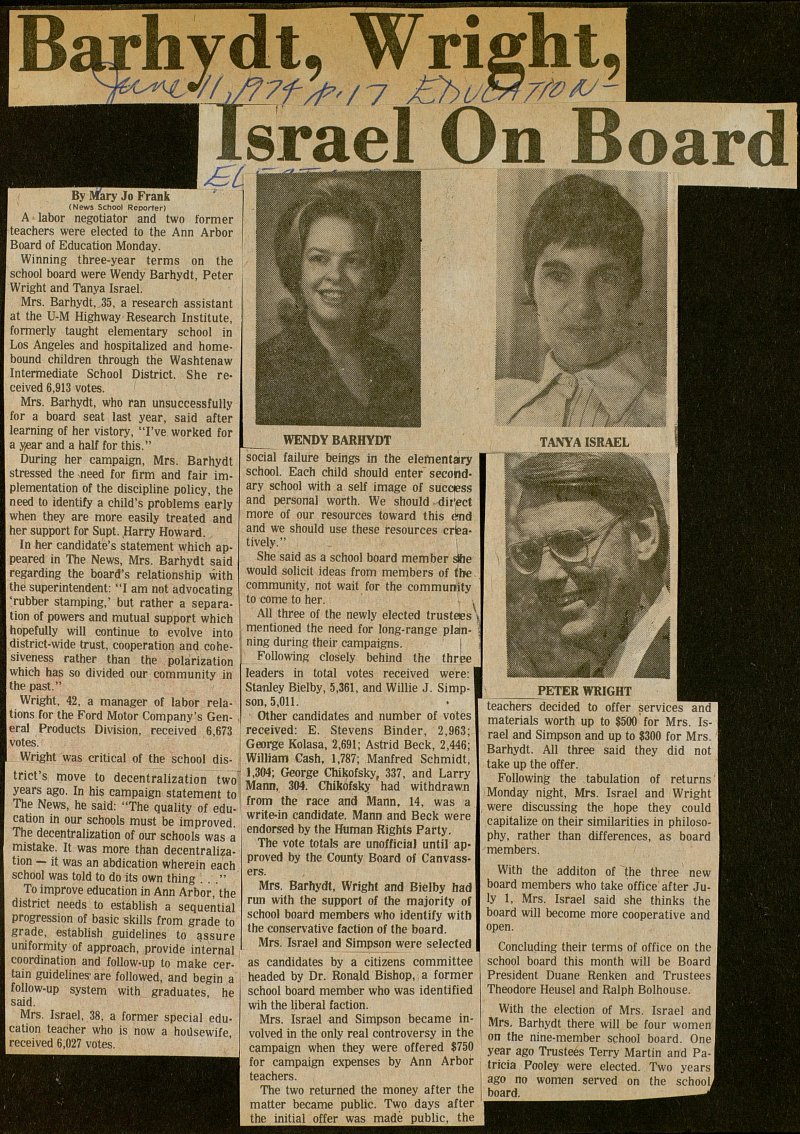 A -labor negotiator and two former teachers were elected to the Ann Arbor Board of Education Monday. Winning three-year terms on the school board were Wendy Barhydt, Peter Wright and Tanya Israel. Mrs. Barhydt, ,35, a research assistant at the U-M Highway Research Institute, formerly taught elementary school in Los Angeles and hospitalized and homebound children through the Washtenaw Intermedíate School District. She received 6,913 votes. Mrs. Barhydt, who ran unsuccessfully for a board seat last year, said after learning of her vistory, 'Tve worked for a y,ear and a half for this." During her campaign, Mrs. Barhydt stressed the need for firm and fair implementation of the discipline policy, the need to identify a child's problems early when they are more easily treated and her support for Supt. ,Harry Howard. In her candidate's statement which appeared in The News, Mrs. Barhydt said regarding the board's relationship with the superintendent: "I am not advocating 'rubber stamping,' but rather a separation of powers and mutual support which hopefully will continue to evolve into district-wide trust, cooperation and cohesiveness rather than the polárization which has so divided our community in the past." Wright, 42, a manager of labor relations for the Ford Motor Company's , eral Products División, received 6,673 votes. Wright was critical of the school district's move to decentralization two years ago. In his campaign statement to The News, he said: "The quality of education in our schools must be improved. The decentralization of our schools was a mistake. It was more than decentralization - it was an abdication wherein each school was told to do its own thing ..." To improve education in Ann Arbor, the district needs to estáblish a sequential progression of basic skills from grade to grade, estáblish guidelines to assure uniformity of approach, provide internal coordination and follow-up to make certain guidelines' are followed, and begin a follow-up system with graduates, he said. Mrs. Israel, 38, a former special education teacher who is now a hoúsewife, received 6,027 votes. social failure beings in the elementary school. Each child should enter" secoindary school with a self image of sucaess and personal worth. We should -direct more of our resources toward this snd and we should use these resources crieatively." She said as a school board member slhe would solicit ideas from members of tibe community, not wait for the community to come to her. All three of the newly elected trustees ■ mentioned the need for long-range plain! ning during their campaigns. Following closely behind the three leaders in total votes received were: Stanley Bielby, 5,361, and Willie J. Simpson, 5,011. Other candidates and number of votes received: E. Stevens Binder, 2,963; ! George Kolasa, 2,691; Astrid Beek, 2,446; William Cash, 1,787; Manfred Schmidt, j 1,304; George Chikofsky,, 337, and Larry Mann, 304. Chikofsky had withdrawn from the race and Mann, 14, was a write-in candidate. Mann and Beek were endorsed by the Human Rights Party. The vote totals are unofficiaJ until approved by the Counfy Board of Canvassers. Mrs. Barhydt, Wright and Bielby had run with the support of the majority of school board members who identify with the conservative faction of the board. Mrs. Israel and Simpson were selected as candidates by a citizens committee headed by Dr. Ronald Bishop, a former school board member who was identified wih the liberal faction. Mrs. Israel and Simpson became involved in the only real controversy in the campaign when they were offered $750 for campaign expenses by Ann Arbor teachers. j The two returned the money after the matter became public. Two days after I the initial offer was made public, the teachers decided to offer services and materials worth up to $500 'for Mrs. Israel and Simpson and up to $300 for Mrs. Barhydt. All three said they did not take up the offer. Following the tabulation of returns' Monday night, Mrs. Israel and Wright i were discussing the hope they could capitalize on their similarities in philosophy, rather than differences, as board members. With the additon of Ihe three new board members who take office after July 1, Mrs. Israel said she thinks the board will become more cooperative and open. Concluding their terms of office on the school board this month will be Board , President Duane Renken and Trustees Theodore Heusel and Ralph Bolhouse. With the election of Mrs. Israel and Mrs. Barhydt there will be four women on the nine-member school board. Onej year ago Trustees Terry Martin and Patricia Pooley were elected. Two yearsl ago no women served on the schoolJ board. __É