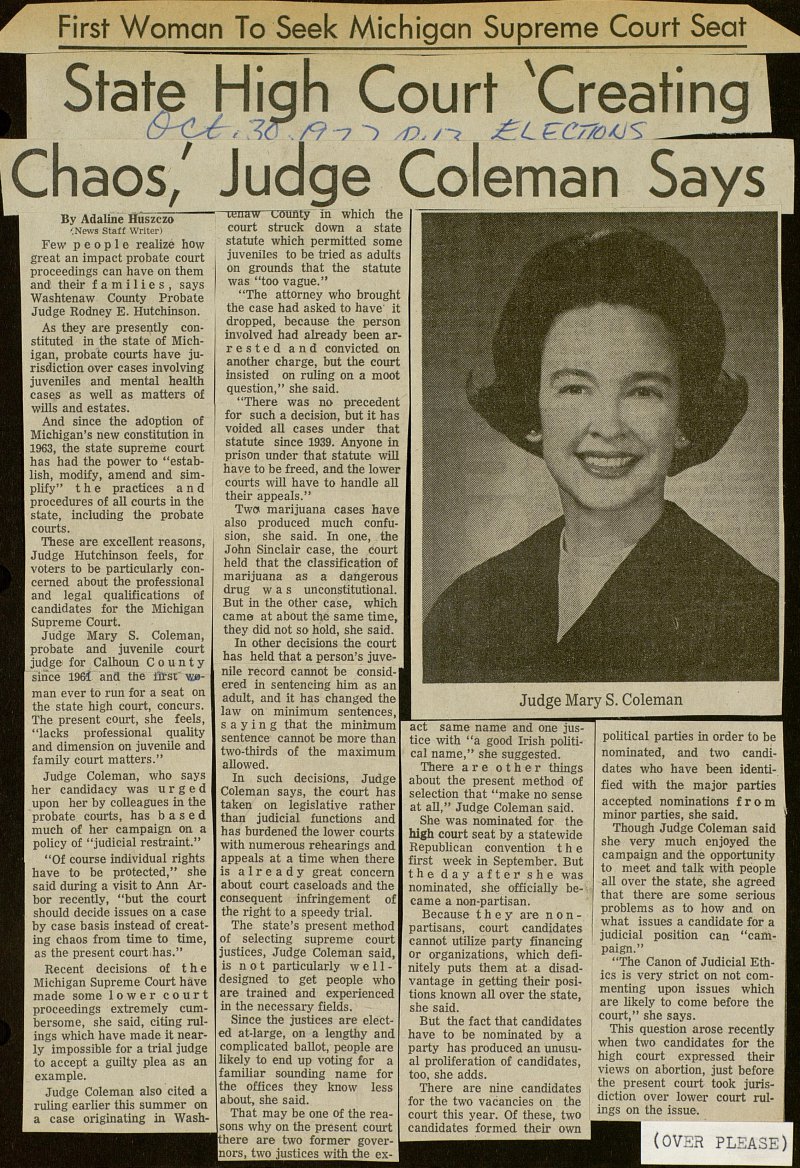 Few p e o p 1 e realize how great an impact probate court proceedings can have on them and their families, says Washtenaw County Probate Judge Rodney E. Hutchinson. As they are presently constituted in the state of Michigan, probate courts have jurisdiction over cases involving juveniles and mental health cases as well as matters of wills and estates. And since the adoption of Michigan's new constitution in 1963, the state supreme court has had the power to "establish, modify, amend and simplify" the practices and procedures of all courts in the state, including the probate courts. These are excellent reasons, Judge Hutchinson feels, for voters to be particularly concerned about the professional and legal qualifications of candidates for the Michigan Supreme Court. Judge Mary S. Coleman, probate and juvenile court judge for Calhoun County siñce 196Í and the first" tosman ever to run for a seat on the state high court, concurs. The present court, she feels, "lacks professional quality and dimensión on juvenile and family court matters." Judge Coleman, who says her candidacy was u r g e d upon her by colleagues in the probate courts, has b a s e d much of her campaign on. a policy of "judicial restraint." "Of course individual rights have to be protected," she said during a visit to Ann Arbor recently, "but the court should decide issues on a case by case basis instead of creating chaos from time to time, as the present court has." Recent decisions of the Michigan Supreme Court have made some lower court proceedings extremely cumbersome, she said, citing rulings which have made it nearly impossible for a trial judge to accept a guilty plea as an example. Judge Coleman also cited a ruling earlier this summer on a case originating in leiiaw coünty ïh which the court struck down a state statute which permitted some juveniles to be tried as adults on grounds that the statute was "too vague." "The attorney who brought the case had asked to have' it dropped, because the person involved had already been arrested and convicted on another charge, but the court insisted on ruling on a moot question," she said. "There was no precedent for such a decisión, but it has voided all cases under that statute since 1939. Anyone in prison under that statute will have to be freed, and the lower courts will have to handle all their appeals." Two marijuana cases have also produced much confusión, she said. In one, the John Sinclair case, the court held that the classification of marijuana as a dangerous drug was unconstitutional. But in the other case, which came at about the same time, they did not so hold, she said. In other decisions the court has held that a person's juvenile record cannot be consid-j ered in sentencing him as anl adult, and it has changed the! law on minimum sentences, I s a y i n g that the minimum F sentence cannot be more than two-thirds of the maximum allowed. j In such decisions, Judgel Coleman says, the court hasl taken on legislative rather than judicial functions and has burdened the lower courts with numerous rehearings and appeals at a time when there is already great concern about court caseloads and the consequent infringement of the right to a speedy trial. The state's present method of selecting supreme court justices, Judge Coleman said, is not particularly w e 1 1 - designed to get people who are trained and experienced in the necessary fields. Since the justices are elected at-large, on a lengthy and complicated ballot, people are likely to end up voting for a familiar sounding name for the offices they know less about, she said. That may be one of the reasons why on the present court there are two former ■ nors, two justices with the I act same name and one justice with "a good Irish political name," she suggested. There are other things about the present method of selection that "make no sense at all," Judge Coleman said. She was nominated for the high court seat by a statewide Republican convention the first week in September. But the day after she was nominated, she officially became a non-partisan. Because t h e y are n o n - partisans, court candidates cannot utilize party financing or organizations, which definitely puts them at a disadvantage in getting their positions known all over the state, she said. But the fact that candidates have to be nominated by a party has produced an unusual proliferation of candidates, too, she adds. There are nine candidates for the two vacancies on the court this year. Of these, two candidates formed their own political parties in order to be nominated, and two candidates who have been identified with the major parties accepted nominations f rom minor parties, she said. Though Judge Coleman said she very much enjoyed the campaign and the opportunity to meet and talk with people all over the state, she agreed that there are some serious problems as to how and on what issues a candidate for a judicial position can "campaign." "The Canon of Judicial Ethics is very strict on not commenting upon issues which are likely to come before the court," she says. This question arose recently when two candidates for the high court expressed their views on aborüon, just before the present court took jurisdiction over lower court rulings on the issue. (OVER PLEASE)