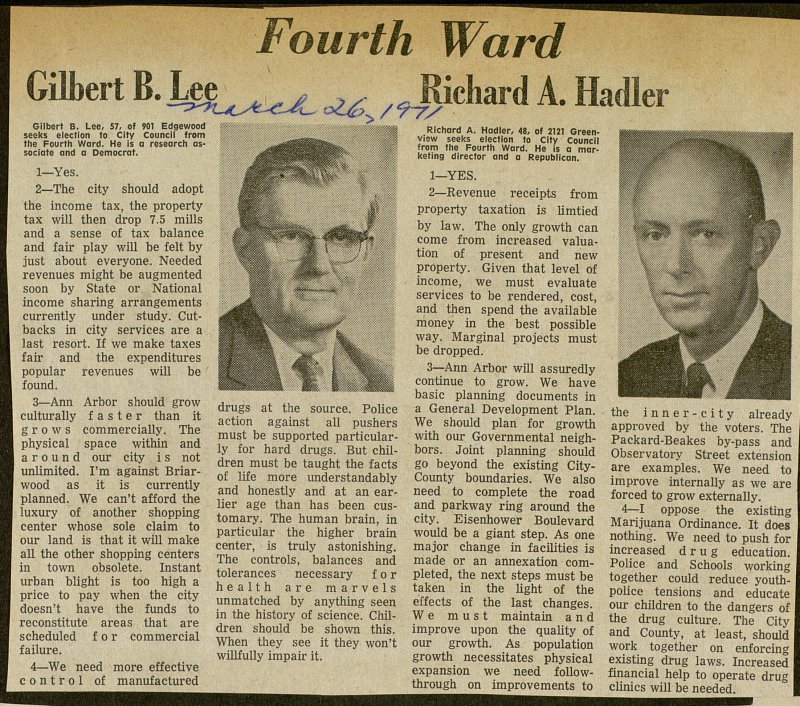 Gilbert B. Lee, 57 of 901 Edgewood seeks election to City Council from the Fourth Ward. He is a research associate and a Democrat. 1- Yes. 2- The city should adopt the income tax, the property tax will then drop 7.5 mills and a sense of tax balance and fair play will be felt by just about everyone. Needed revenues might be augmented soon by State or National income sharing arrangements currently under study. Cutbacks in city services are a last resort. If we make taxes fair and the expenditures popular revenues will be found. 3 - Ann Arbor should grow culturally faster than it grows commercially. The physical space within and around our city i s not unlimited. I'm against Briarwood as it is currently planned. We can't afford the luxury of another shopping center whose sole claim to our land is that it will make all the other shopping centers in town obsolete. Instant urban blight is too high a price to pay when the city doesn't have the funds to reconstitute areas that are scheduled for commercial failure. 4 - We need more effective control of manufactured drugs at the source. Police action against all pushers must be supported particularly for hard drugs. But children must be taught the facts of life more understandably and honestly and at an earlier age than has been customary. The human brain, in particular the higher brain center, is truly astonishing. The controls, balances and tolerances necessary for health are marvels unmatched by anything seen in the history of science. Children should be shown this. When they see it they won't willfully impair it. Richard A. Hadler Richard A. Hadler, 48, of 2121 Greenview seeks election to City Council from the Fourth Ward. He is a marketing director and a Republican. 1- YES. 2- Revenue receipts from property taxation is limited by law. The only growth can come from increased valuation of present and new property. Given that level of income, we must evaluate services to be rendered, cost, and then spend the available money in the best possible way. Marginal projects must be dropped. 3- Ann Arbor will assuredly continue to grow. We have basic planning documents in a General Development Plan. We should plan for growth with our Governmental neighbors. Joint planning should go beyond the existing City-County boundaries. We also need to complete the road and parkway ring around the city. Eisenhower Boulevard would be a giant step. As one major change in facilities is made or an annexation completed, the next steps must be taken in the light of the effects of the last changes. We must maintain and improve upon the quality of our growth. As population growth necessitates physical expansion we need follow through on improvements to - the inner-city already approved by the voters. The Packard-Beakes by-pass and Observatory Street extension are examples. We need to improve internally as we are forced to grow externally. 4-I oppose the existing Marijuana Ordinance. It does nothing. We need to push for increased drug education. Police and Schools working together could reduce youth-police tensions and educate our children to the dangers of the drug culture. The City and County, at least, should work together on enforcing existing drug laws. Increased financial help to operate drug clinics will be needed.