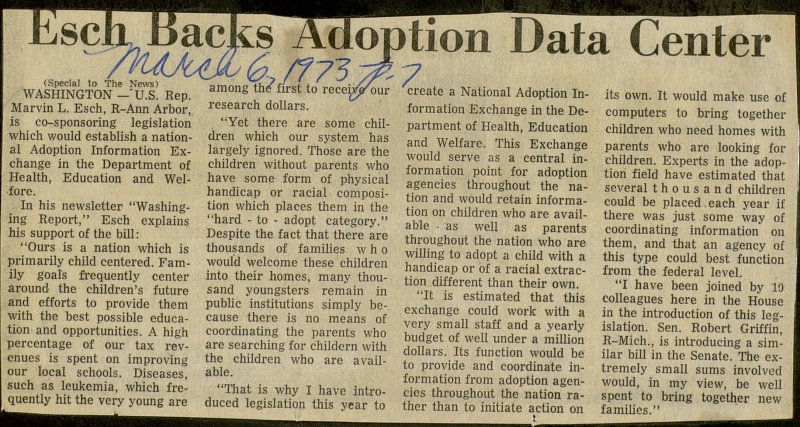 WASHINGTON - U.S. Rep. Marvin L. Esch, R-Ann Arbor, is co-sponsoring legislation whieh would establish a national Adoption Information Exchange in the Department of Health, Education and Welfore. ín his newsletter "Washinging Report," Esch explains his support of the bilí: "Ours is a nation which is primarily child centered. Family goals frequently center around the children's future and efforts to provide them with the best possible education and opportunities. A high percentage of our tax revenues is spent on improving our local schools. Diseases, such as leukemia, which frequently hit the very young are among the first to receiyp'our research dollars. "Yet there are some children which our system has largely ignored. Those are the children without parents who have some form of physical handicap or racial composition which places them in the "hard - to - adopt category." Despite the fact that there are thousands of families who would welcome these children into their homes, many thousand youngsters remain in public institutions simply because there is no means of coordinating the parents who are searching for childern with the children who are available. "That is why I have introduced legislation this year to créate a National Adoption Information Exchange in the Department of Health, Education and Welfare. This Exchange would serve as a central information point for adoption agencies throughout the nation and would retain information on children who are available ■ as well as parents throughout the nation who are willing to adopt a child with a handicap or of a racial extraction different than their own. "It is estimated that this exchange could work with a very small staff and a yearly budget of well under a million dollars. lts function would be to provide and coordínate information from adoption agencies throughout the nation rathcr than to initiate action on its own. It would make use of computers to bring together children who need homes with parents who are looking for children. Experts in the adoptiori field have estimated that several thousand children could be placed each year if there was just some way of coordinating information on them, and that an agency of this type could best function from the federal level. "I have been joined by 10 colleagues here in the House in the introduction of this legislation. Sen. Robert Griffin, R-Mich., is introducing a similar bilí in the Senate. The extremely small sums involved would, in my view, be well spent to bring together new families."