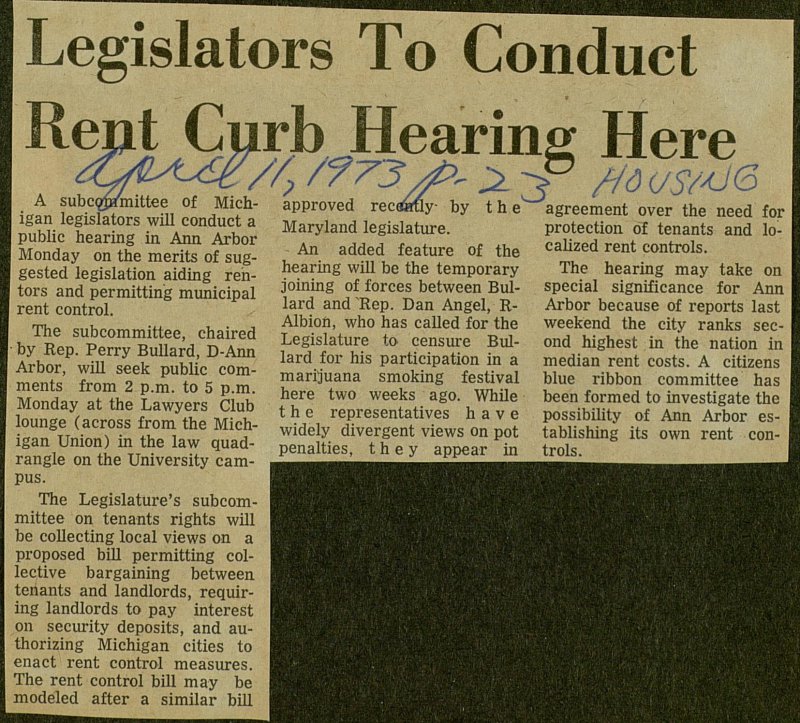 A subcommittee of Michigan legislators will conduct a public hearing in Ann Arbor Monday on the merits of suggested legislation aiding rentors and permitting municipal rent control. The subcommittee, chaired by Rep. Perry Bullard, D-Ann Arbor, will seek public comments from 2 p.m. to 5 p.m. Monday at the Lawyers Club lounge (across from the Michigan Union) in the law quadrangle on the University campus. The Legislature's subcommittee on tenants rights will be collecting local views on a proposed bill permitting collective bargaining between tenants and landlords, requiring landlords to pay interest on security deposits, and authorizing Michigan cities to enact rent control measures. The rent control bill may be modeled after a similar bill approved recently by the Maryland legislature. An added feature of the hearing will be the temporary joining of forces between Bullard and Rep. Dan Angel, R-Albion, who has called for the Legislature to censure Bullard for his participation in a marijuana smoking festival here two weeks ago. While the representatives have widely divergent views on pot penalties, they appear in agreement over the need for protection of tenants and localized rent controls. The hearing may take on special significance for Ann Arbor because of reports last weekend the city ranks second highest in the nation in median rent costs. A citizens blue ribbon committee has been formed to investigate the possibility of Ann Arbor establishing its own rent controls.