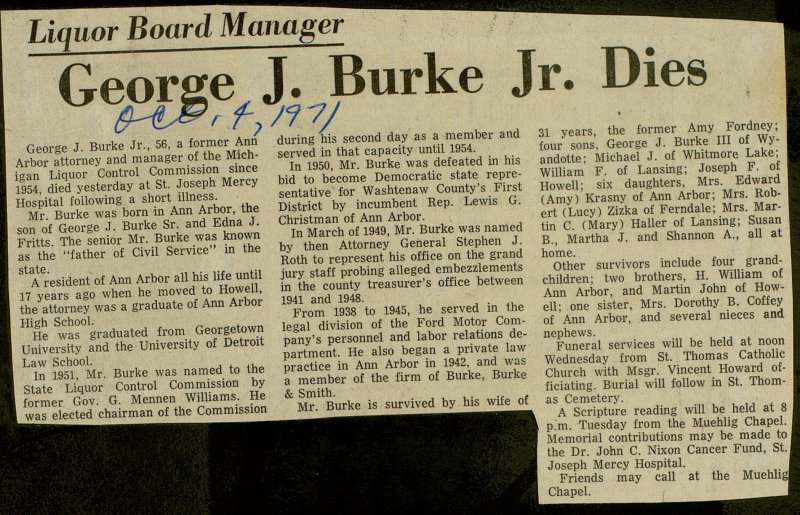 George J. Burke Jr., 56, a former Ann Arbor attorney and manager of the Michigan Liquor Control Commission since 1954 died yesterday at St. Joseph Mercy Hospital following a short illness_ Mr Burke was born in Ann Arbor, the son of George J. Burke Sr. and Edna J. Fritts. The senior Mr. Burke was known as the "father of Civil Service" in the Resident of Ann Arbor all his life until 17 years ago when he moved to Howell, the attorney was a graduate of Ann Arbor HÍS graduated from Georgetown University and the University of Detroit i Law School. In 1951 Mr. Burke was named to the State Liquor Control Commission by former Gov. G. Mennen Williams. He was elected chairman of the Commission during his second day as a member and served in that capacity until 1954. In 1950, Mr. Burke was defeated in his bid to become Democratic state representative for Washtenaw County's First District by incumbent Rep. Lewis G. Christman of Ann Arbor. In March of 1949, Mr. Burke was named by then Attorney General Stephen J. Roth to represent his office on the grand iury staff probing alleged embezzlements in the county treasurer's office between 1941 and 1948. From 1938 to 1945, he served in the legal division of the Ford Motor Company's personnel and labor relations department. He also began a private law practice in Ann Arbor in 1942, and was a member of the firm of Burke, Burke & Smith. . . Mr. Burke is survived by his -- i- M 31 years, the former Amy Fordney, four sons, George J. Burke III of Wyandotte; Michael J. of Whitmore Lake; William F. of Lansing; Joseph F. of Howell; six daughters, Mrs. Edward (Amy) Krasny of Ann Arbor; Mrs. I ert (Lucy) Zizka of Ferndale; Mrs Martin C (Mary) Haller of Lansing; Susan B., Martha J. and Shannon A., all at home. , Other survivors include four grandchildren; two brothers, H. William of Ann Arbor, and Martin John of Howell- one sister, Mrs. Dorothy B. Coffey of Ann Arbor, and several nieces and nephews. Funeral services will be held at noon Wednesday from St. Thomas Catholic Church with Msgr. Vincent Howard officiating. Burial will follow in St. Thomas Cemetery. A Scripture reading will be held at 8 p.m. Tuesday from the Muehlig Chapel. Memorial contributions may be made to the Dr. John C. Nixon Cancer Fund, St. Joseph Mercy Hospital. Friends may call at the Muehlig Chapel.