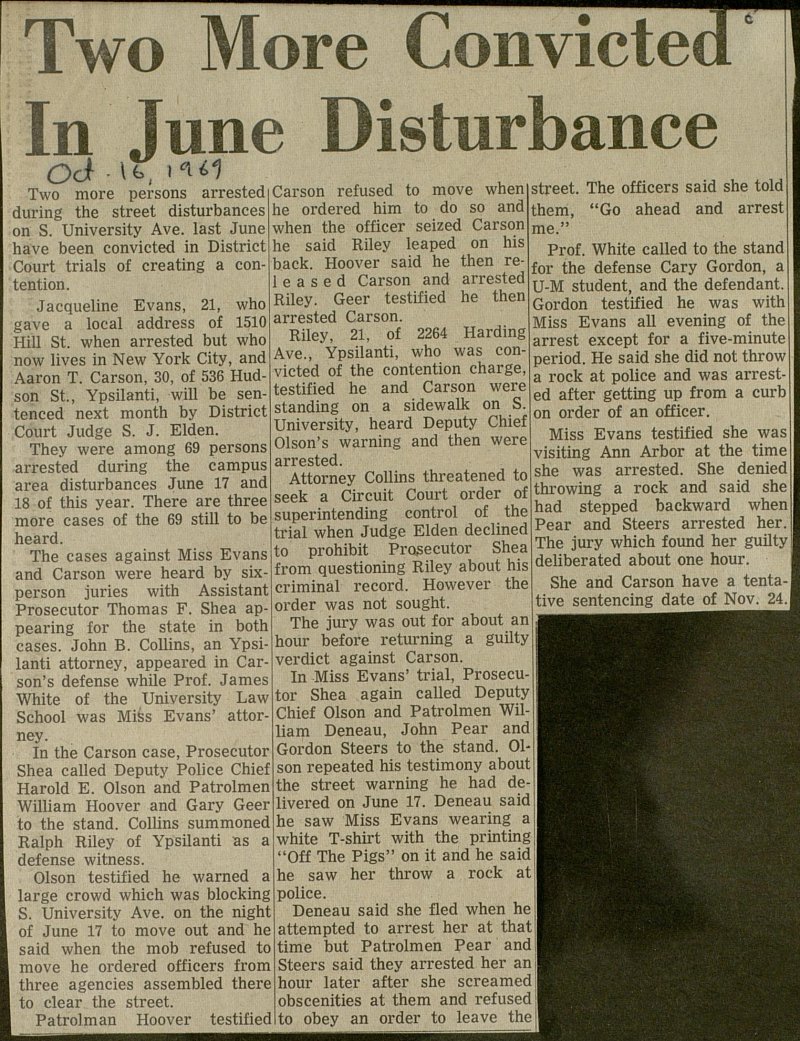 Two more persons arrested during the street disturbances on S. University Ave. last June have been convicted in District Court trials of creating a contention. Jacqueline Evans, 21, who gave a local address of 1510 Hill St. when arrested but who now lives in New York City, and Aaron T. Carson, 30, of 536 Hudson St., Ypsilanti, will be sentenced next month by District Court Judge S. J. Elden. They were among 69 persons arrested during the campus area disturbances June 17 and 18 of this year. There are three more cases of the 69 still to be heard. The cases against Miss Evans and Carson were heard by sixperson juries with Assistant Prosecutor Thomas F. Shea appearing for the state in both cases. John B. Collins, an Ypsilanti attorney, appeared in Carson's defense while Prof. James White of the University Law School was Miss Evans' attorney. In the Carson case, Prosecutor Shea called Deputy Pólice ChieJ Harold E. Olson and Patrolmen William Hoover and Gary Geer to the stand. Collins summonec Ralph Riley of Ypsilanti as a defense witness. Olson testified he warned a large crowd which was blocking S. University Ave. on the nigh of June 17 to move out and he said when the mob refused to move he ordered officers from three agencies assembled there to clear the street. Patrolman Hoover testifiec Carson refused to move when ie ordered him to do so and when the officer seized Carson he said Riley leaped on his iack. Hoover said he then ree a s e d Carson and arrested Riley. Geer testified he then arrested Carson. Riley, 21, of 2264 Harding Ave., Ypsilanti, who was convicted of the contention charge, testified he and Carson were standing on a sidewalk on S. University, heard Deputy Chief Olson's warning and then were arrested. Attorney Collins threatened to seek a Circuit Court order of superintending control of the trial when Judge Elden declined ;o prohibit Prosecutor Shea from questioning Riley about his criminal record. However the order was not sought. The jury was out for about an hour before returning a guilty verdict against Carson. In Miss Evans' trial, Prosecutor Shea again called Deputy Chief Olson and Patrolmen William Deneau, John Pear and Gordon Steers to the stand. Olson repeated his testimony about the street warning he had delivered on June 17. Deneau said he saw Miss Evans wearing a white T-shirt with the printing "Off The Pigs" on it and he said he saw her throw a rock at pólice. Deneau said she fled when he attempted to arrest her at that time but Patrolmen Pear and Steers said they arrested her an hour later after she screamed obscenities at them and refused to obey an order to leave the street. The officers said she told them, "Go ahead and arrest me." Prof. White called to the stand for the defense Cary Gordon, a U-M student, and the defendant. Gordon testified he was with Miss Evans all evening of the arrest except for a five-minute period. He said she did not throw a rock at pólice and was arrested after getting up from a curb on order of an officer. Miss Evans testified she was visiting Ann Arbor at the time she was arrested. She denied throwing a rock and said she had stepped backward when Pear and Steers arrested her. The jury which found her guilty deliberated about one hour. She and Carson have a tentative sentencing date of Nov. 24.