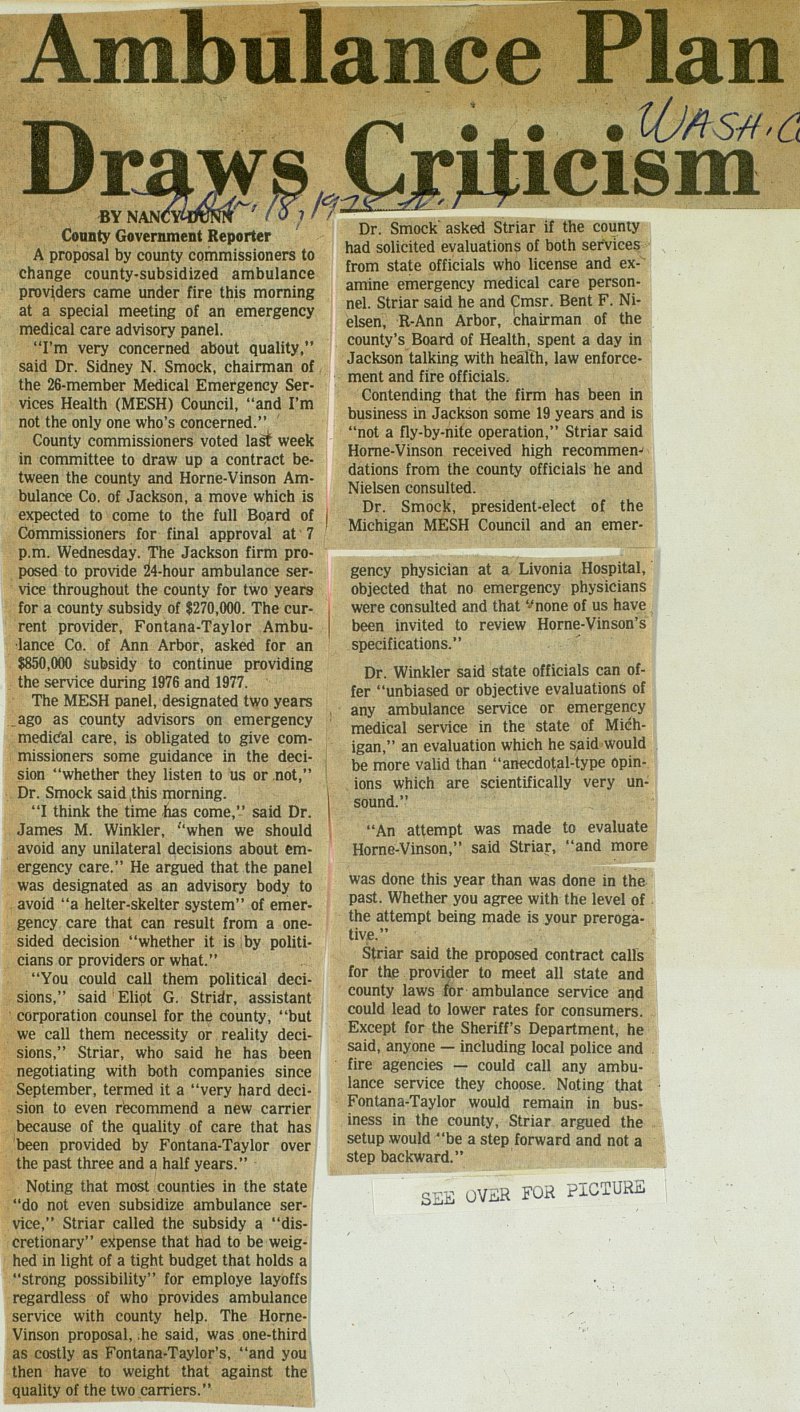 A proposal by county commissioners to change county-subsidized ambulance providers came under fire this morning at a special meeting of an emergency medical care advisory panel. "I'm very concerned about quality," said Dr. Sidney N. Smock, chairman of the 26-member Medical Emergency Services Health (MESH) Council, "and I'm not the only one who's concerned." County commissioners voted last week in committee to draw up a contract between the county and Horne-Vinson Ambulance Co. of Jackson, a move which is expected to come to the full Board of Commissioners for final approval at 7 p.m. Wednesday. The Jackson firm proposed to provide 4-hour ambulance service throughout the county for two years for a county subsidy of $270,000. The current provider, Fontana-Taylor Ambulance Co. of Ann Arbor, asked for an $850,000 subsidy to continue providing the service during 1976 and 1977. The MESH panel, designated two years ago as county advisors on emergency medical care, is obligated to give commissioners some guidance in the decision "whether they listen to us or not," Dr. Smock said , this morning. "I think the time has come," said Dr. James M. Winkler, ''when we should avoid any unilateral decisions about emergency care." He argued that the panel was designated as an advisory body to avoid "a helter-skelter system" of emergency care that can result from a onesided decisión "whether it is by politicians or providers or what." "You could call them political decisions," said' Eliott G. Striar, assistant Corporation counsel for the county, "but we call them necessity or reality decisions," Striar, who said he has been negotiating with both companies since September, termed it a "very hard decisión to even recommend a new carrier because of the quality of care that has been provided by Fontana-Taylor over the past three and a half years." Noting that most counties in the state "do not even subsidize ambulance service," Striar called the subsidy a "discretionary" expense that had to be weighed in light of a tight budget that holds a "strong possibility" for employee layoffs regardless of who provides ambulance service with county help. The HorneVinson proposal, .he said, was one-third as costly as Fontana-Taylor's, "and you then have to weight that against the quality of the two carriers." Dr. Smock asked Striar ïf the county had solicited evaluations of both services from state officials who license and examine emergency medical care personnel. Striar said he and Cmsr. Bent F. Nielsen, R-Ann Arbor, chairman of the county's Board of Health, spent a day in Jackson talking with health, law enforcement and fire officials. Contending that the firm has been in business in Jackson some 19 years and is "not a fly-by-nite operation," Striar said Horne-Vinson received high recommendations from the county officials he and Nielsen consulted. Dr. Smock, president-elect of the Michigan MESH Council and an emergency physician at a Livonia Hospital, objected that no emergency physicians were consulted and that ''none of us have been invited to review Horne-Vinson's specifications." Dr. Winkler said state officials can offer "unbiased or objective evaluations of any ambulance service or emergency medical service in the state of Michigan," an evaluation which he said would be more valid than "anecdotal-type opinions which are scientifically very unsound." "An attempt was made to evaluate Horne-Vinson," said Striar, "and more was done this year than was done in the past. Whether you agree with the level of the attempt being made is your prerogative." Striar said the proposed contract calis for the provider to meet all state and county laws for ambulance service and could lead to lower rates for consumers. Except for the Sheriff's Department, he said, anyone - including local pólice and fire agencies - could call any ambulance service they choose. Noting that Fontana-Taylor would remain in business in the county, Striar argued the setup would "be a step forward and not a step backward."