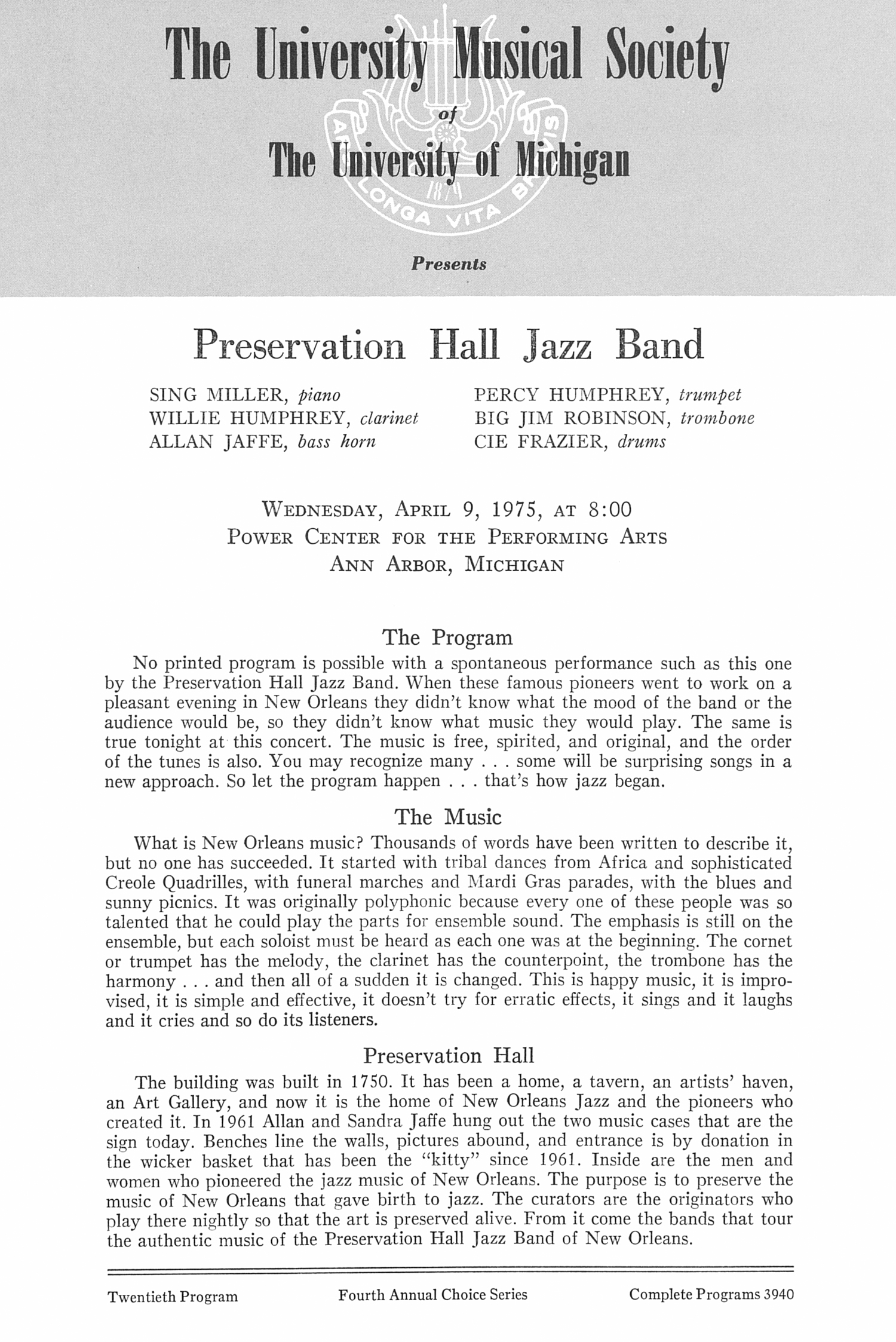 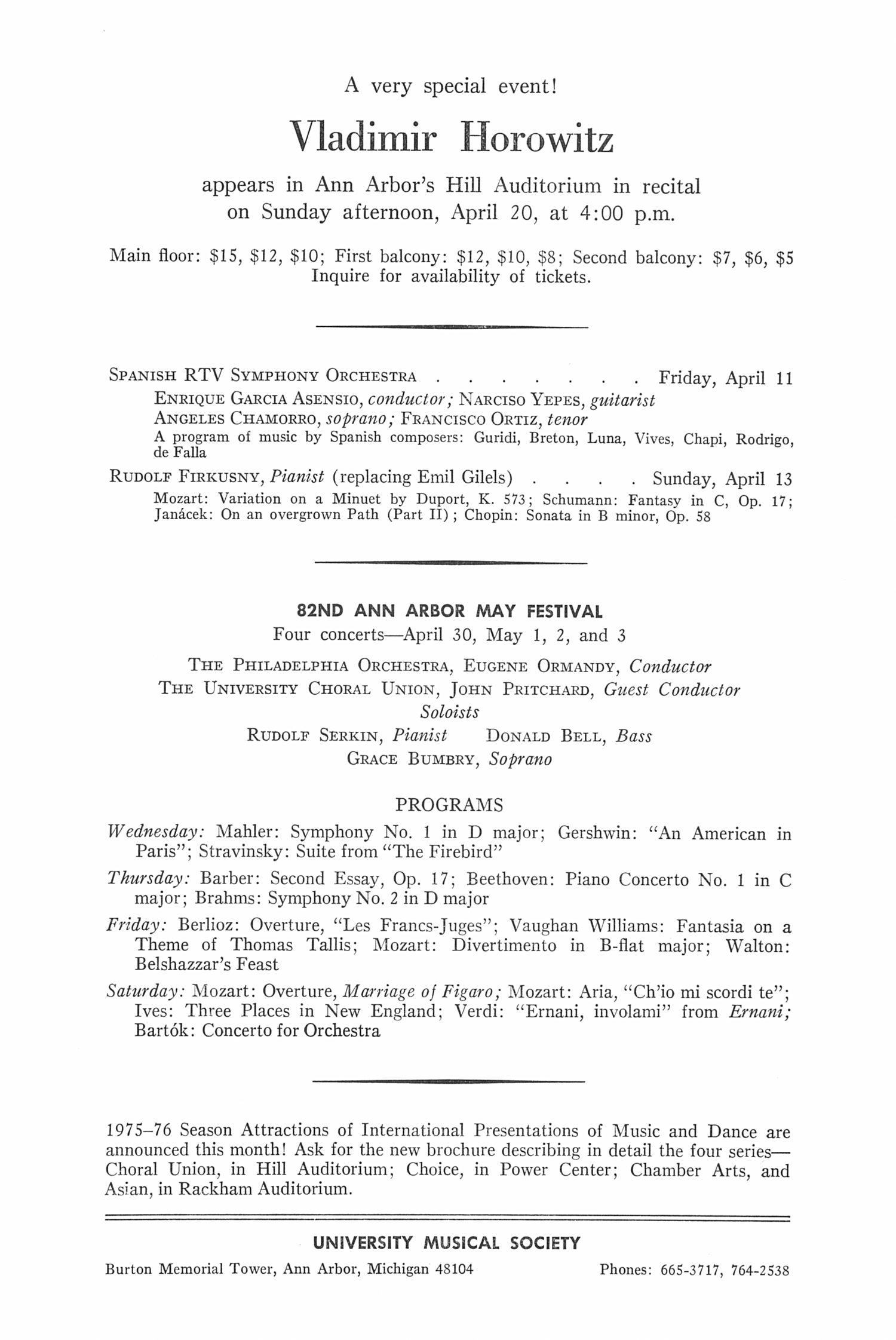 The University Musical Society
of
The University of Michigan
Presents
Preservation Hall Jazz Band
SING MILLER, piano PERCY HUMPHREY, trumpet
WILLIE HUMPHREY, clarinet BIG JIM ROBINSON, trombone
ALLAN JAFFE, bass horn CIE FRAZIER, drums
Wednesday, April 9, 1975, at 8:00
Power Center for the Performing Arts
Ann Arbor, Michigan
The Program
No printed program is possible with a spontaneous performance such as this one by the Preservation Hall Jazz Band. When these famous pioneers went to work on a pleasant evening in New Orleans they didn't know what the mood of the band or the audience would be, so they didn't know what music they would play. The same is true tonight at this concert. The music is free, spirited, and original, and the order of the tunes is also. You may recognize many . . . some will be surprising songs in a new approach. So let the program happen . . . that's how jazz began.
The Music
What is New Orleans music Thousands of words have been written to describe it, but no one has succeeded. It started with tribal dances from Africa and sophisticated Creole Quadrilles, with funeral marches and Mardi Gras parades, with the blues and sunny picnics. It was originally polyphonic because every one of these people was so talented that he could play the parts for ensemble sound. The emphasis is still on the ensemble, but each soloist must be heard as each one was at the beginning. The cornet or trumpet has the melody, the clarinet has the counterpoint, the trombone has the harmony . . . and then all of a sudden it is changed. This is happy music, it is impro?vised, it is simple and effective, it doesn't try for erratic effects, it sings and it laughs and it cries and so do its listeners.
Preservation Hall
The building was built in 1750. It has been a home, a tavern, an artists' haven, an Art Gallery, and now it is the home of New Orleans Jazz and the pioneers who created it. In 1961 Allan and Sandra Jaffe hung out the two music cases that are the sign today. Benches line the walls, pictures abound, and entrance is by donation in the wicker basket that has been the "kitty" since 1961. Inside are the men and women who pioneered the jazz music of New Orleans. The purpose is to preserve the music of New Orleans that gave birth to jazz. The curators are the originators who play there nightly so that the art is preserved alive. From it come the bands that tour the authentic music of the Preservation Hall Jazz Band of New Orleans.
Twentieth Program Fourth Annual Choice Scries Complete Programs 3940
A very special event!
Vladimir Horowitz
appears in Ann Arbor's Hill Auditorium in recital on Sunday afternoon, April 20, at 4:00 p.m.
Main floor: $15, $12, $10; First balcony: $12, $10, $8; Second balcony: $7, $6, $5 Inquire for availability of tickets.
Spanish RTV Symphony Orchestra.......Friday, April 11
Enrique Garcia Asensio, conductor; Narciso Yepes, guitarist
Angeles Chamorro, soprano; Francisco Ortiz, tenor
A program of music by Spanish composers: Guridi, Breton, Luna, Vives, Chapi, Rodrigo,
de Falla
Rudolf Firkusny, Pianist (replacing Emil Gilels) .... Sunday, April 13 Mozart: Variation on a Minuet by Duport, K. 573; Schumann: Fantasy in C, Op. 17; Janacek: On an overgrown Path (Part II) ; Chopin: Sonata in B minor, Op. 58
82ND ANN ARBOR MAY FESTIVAL
Four concerts--April 30, May 1, 2, and 3
The Philadelphia Orchestra, Eugene Ormandy, Conductor The University Choral Union, John Pritchard, Guest Conductor
Soloists
Rudolf Serkin, Pianist Donald Bell, Bass Grace Bumbry, Soprano
PROGRAMS
Wednesday: Mahler: Symphony No. 1 in D major: Gershwin: "An American in Paris"; Stravinsky: Suite from "The Firebird"
Thursday: Barber: Second Essay, Op. 17; Beethoven: Piano Concerto No. 1 in C major; Brahms: Symphony No. 2 in D major
Friday: Berlioz: Overture, "Les FrancsJuges"; Vaughan Williams: Fantasia on a Theme of Thomas Tallis; Mozart: Divertimento in Bflat major; Walton: Belshazzar's Feast
Saturday: Mozart: Overture, Marriage of Figaro; Mozart: Aria, "Ch'io mi scordi te"; Ives: Three Places in New England; Verdi: "Ernani, involami" from Ernani; Bart ok: Concerto for Orchestra
197576 Season Attractions of International Presentations of Music and Dance are announced this month! Ask for the new brochure describing in detail the four series-Choral Union, in Hill Auditorium; Choice, in Power Center; Chamber Arts, and Asian, in Rackham Auditorium.
UNIVERSITY MUSICAL SOCIETY
Burton Memorial Tower, Ann Arbor, Michigan 4S104 Phones: 6653717, 7642538