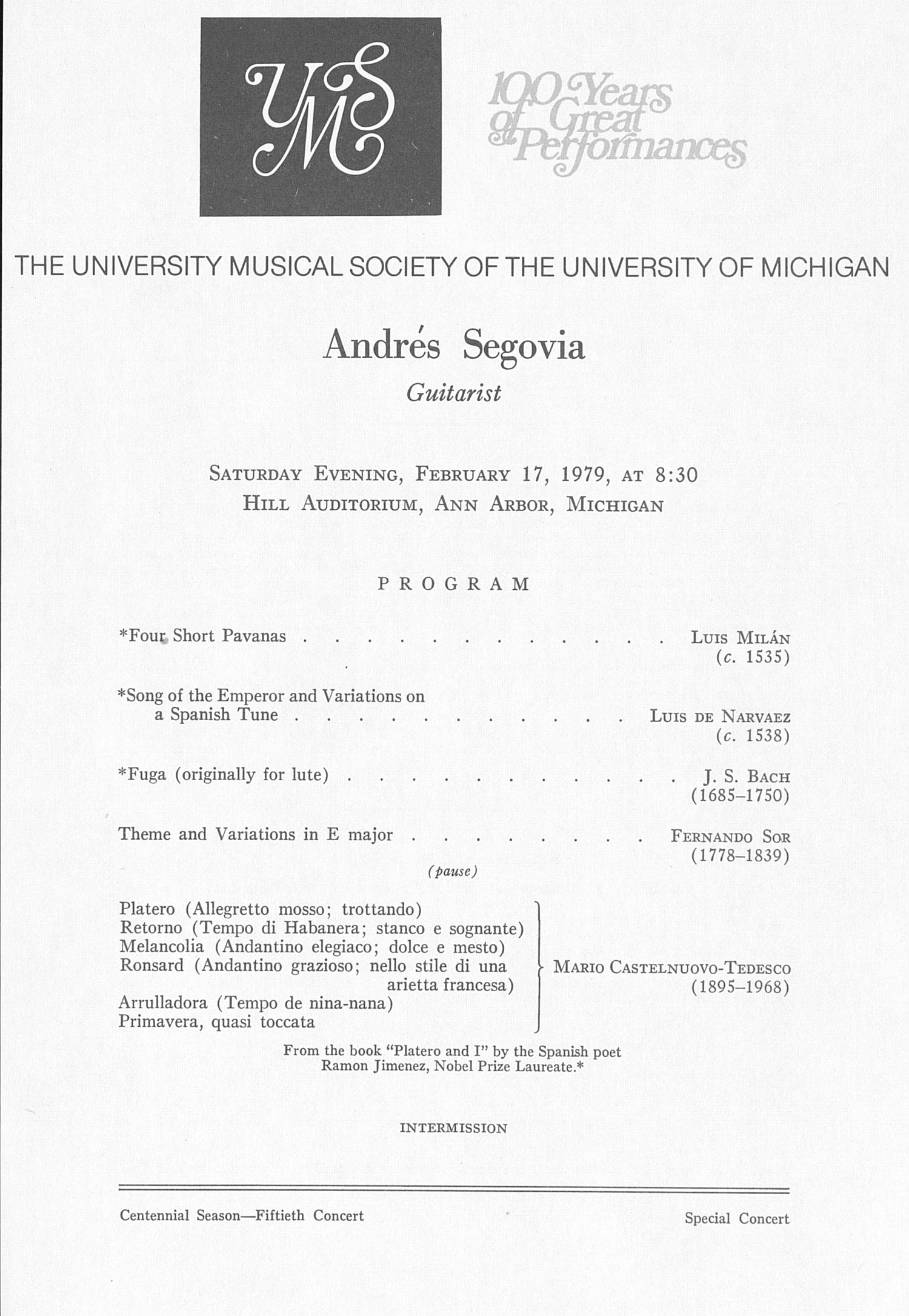 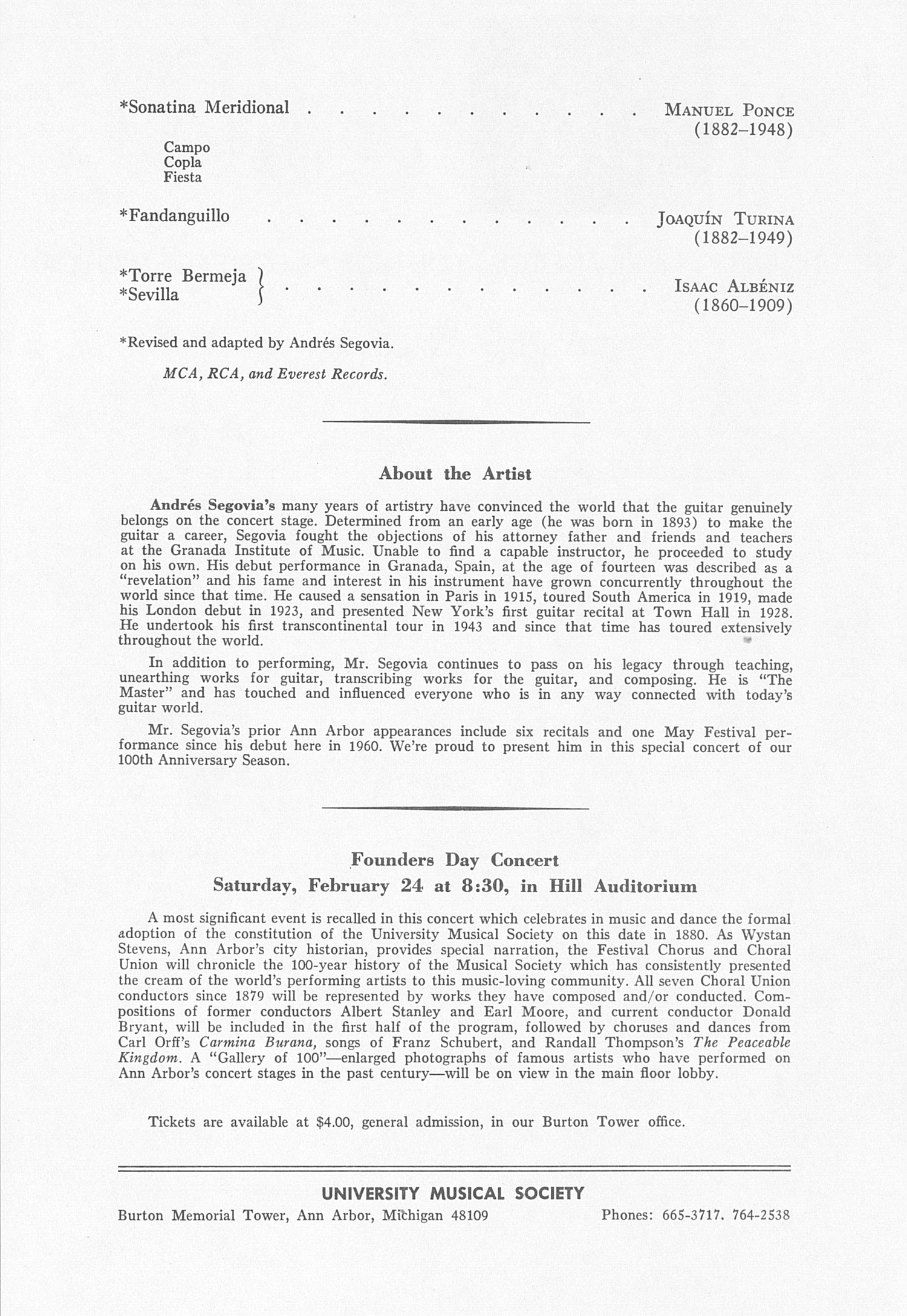 ZVea
JLJUj
THE UNIVERSITY MUSICAL SOCIETY OF THE UNIVERSITY OF MICHIGAh
Andres Segovia
Guitarist
Saturday Evening, February 17, 1979, at 8:30 Hill Auditorium, Ann Arbor, Michigan
PROGRAM
?Four Short Pavanas
Song of the Emperor and Variations on a Spanish Tune.....
Luis Milan (c. 1535)
Luis de Narvaez (c. 1538)
Fuga (originally for lute)
Theme and Variations in E major.....
(pause)
Platero (Allegretto mosso; trottando) Retorno (Tempo di Habanera; stanco e sognante) Melancolia (Andantino elegiaco; dolce e mesto) Ronsard (Andantino grazioso; nello stile di una
arietta francesa)
Arrulladora (Tempo de nina-nana) Primavera, quasi toccata
J. S. Bach (1685-1750)
Fernando Sor (1778-1839)
Mario Castelnuovo-Tedesco (1895-1968)
From the book "Platero and I" by the Spanish poet Ramon Jimenez, Nobel Prize Laureate.
INTERMISSION
Centennial Season--Fiftieth Concert
Special Concert
?Sonatina Meridional...........Manuel Ponce
(1882-1948) Campo Copla Fiesta
?Fandanguillo............Joaquin Turina
(1882-1949)
Torre Bermeja ) T A
,,.(,.., J ............Isaac Albeniz
5evula (1860-1909)
?Revised and adapted by Andres Segovia. MCA, RCA, and Everest Records.
About the Artist
Andres Segovia's many years of artistry have convinced the world that the guitar genuinely belongs on the concert stage. Determined from an early age (he was born in 1893) to make the guitar a career, Segovia fought the objections of his attorney father and friends and teachers at the Granada Institute of Music. Unable to find a capable instructor, he proceeded to study on his own. His debut performance in Granada, Spain, at the age of fourteen was described as a "revelation" and his fame and interest in his instrument have grown concurrently throughout the world since that time. He caused a sensation in Paris in 1915, toured South America in 1919, made his London debut in 1923, and presented New York's first guitar recital at Town Hall in 1928. He undertook his first transcontinental tour in 1943 and since that time has toured extensively throughout the world. ?
In addition to performing, Mr. Segovia continues to pass on his legacy through teaching, unearthing works for guitar, transcribing works for the guitar, and composing. He is "The Master" and has touched and influenced everyone who is in any way connected with today's guitar world.
Mr. Segovia's prior Ann Arbor appearances include six recitals and one May Festival per?formance since his debut here in 1960. We're proud to present him in this special concert of our 100th Anniversary Season.
Founders Day Concert Saturday, February 24 at 8:30, in Hill Auditorium
A most significant event is recalled in this concert which celebrates in music and dance the formal adoption of the constitution of the University Musical Society on this date in 1880. As Wystan Stevens, Ann Arbor's city historian, provides special narration, the Festival Chorus and Choral Union will chronicle the 100-year history of the Musical Society which has consistently presented the cream of the world's performing artists to this music-loving community. All seven Choral Union conductors since 1879 will be represented by works they have composed andor conducted. Com?positions of former conductors Albert Stanley and Earl Moore, and current conductor Donald Bryant, will be included in the first half of the program, followed by choruses and dances from Carl Orff's Carmina Burana, songs of Franz Schubert, and Randall Thompson's The Peaceable Kingdom. A "Gallery of 100"--enlarged photographs of famous artists who have performed on Ann Arbor's concert stages in the past century--will be on view in the main floor lobby.
Tickets are available at $4.00, general admission, in our Burton Tower office.
UNIVERSITY MUSICAL SOCIETY
Burton Memorial Tower, Ann Arbor, Michigan 48109 Phones: 665-3717. 764-2538