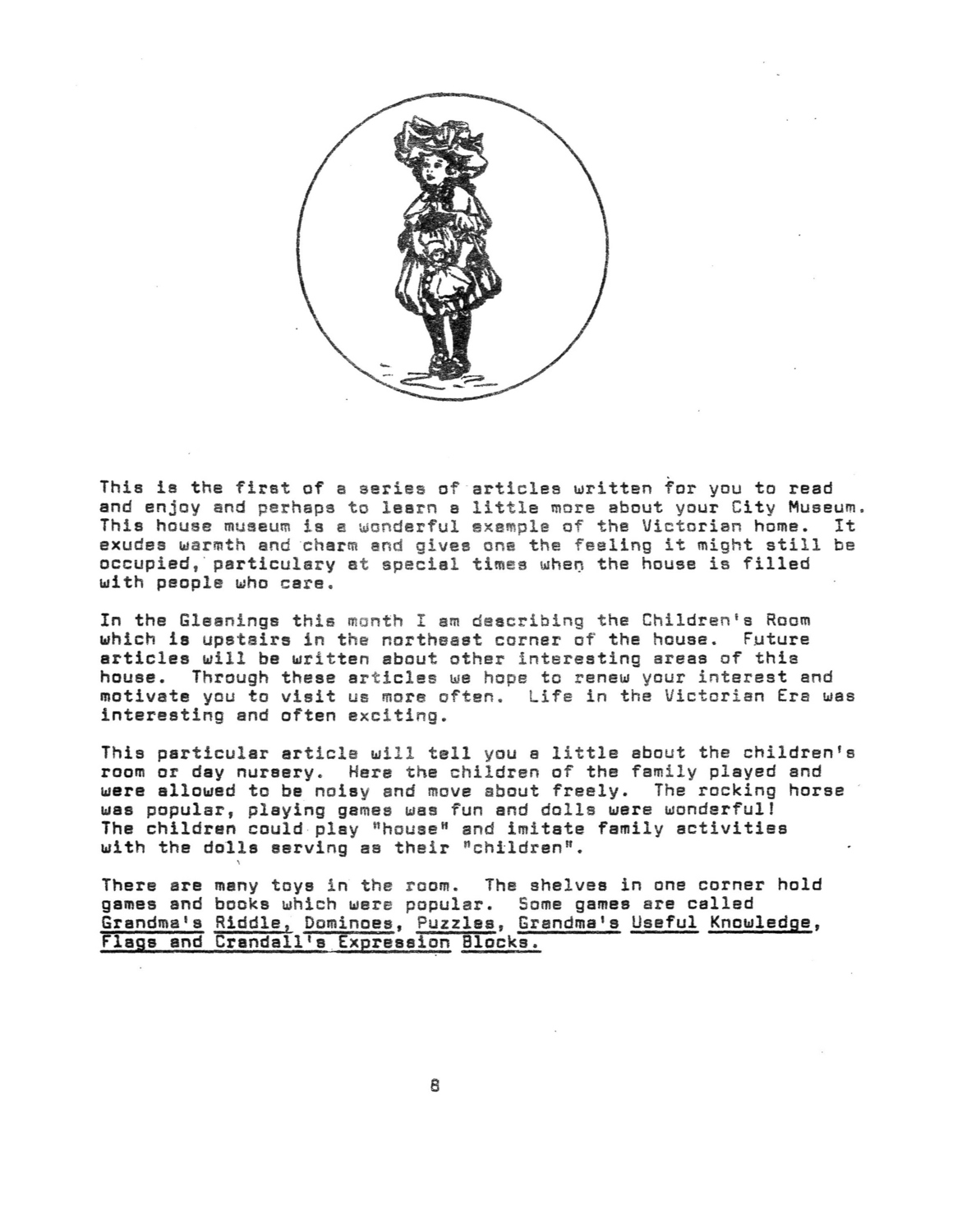 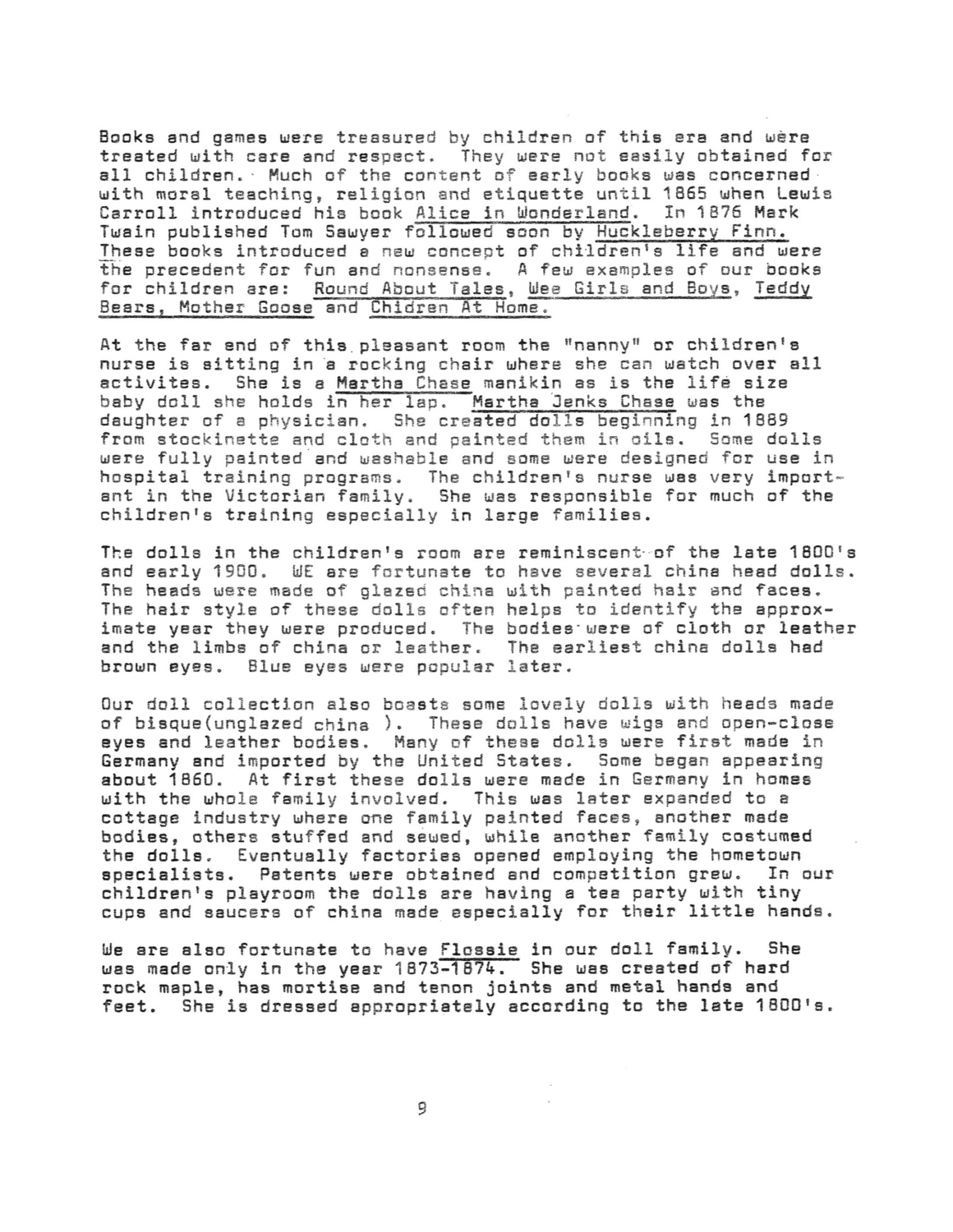 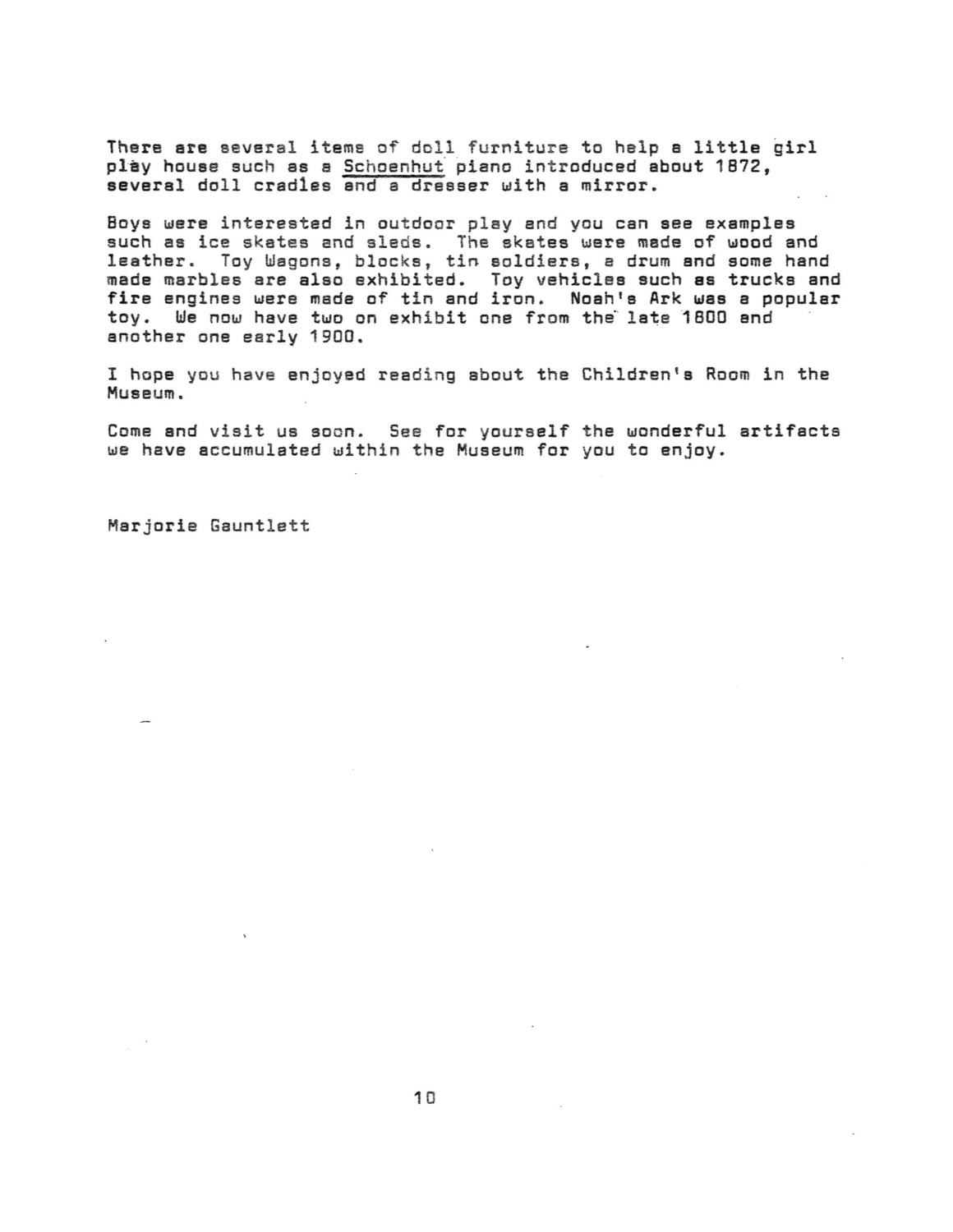 This is the first of a series of articles written for you to read and enjoy and perhaps to learn a little more about your City Museum. This house museum is a wonderful example of the Victorian home. It exudes warmth and charm and gives one the feeling it might still be occupied, particulary at special times when the house is filled with people who care.

In the Gleanings this month I am describing the Children's Room which is upstairs in the northeast corner of the house. Future articles will be written about other interesting areas of this house. Through these articles we hope to renew your interest and motivate you to visit us more often. Life in the Victorian Era was interesting and often exciting.

This particular article will tell you a little about the children's room or day nursery. Here the children of the family played and were allowed to be noisy and move about freely. The rocking horse was popular, playing games was fun and dolls were wonderful! with the dolls serving as their “children”.

There are many toys in the room. The shelves in one corner hold games and books which were popular. Some games are called Grandma's Riddle, Dominoes, Puzzles, Grandma's Useful Knowledge, Flags and Crandall's Expression Blocks.

Books and games were treasured by children of this are and were treated with care and respect. They were not easily obtained for all children. Much of the content of early books was concerned with moral teaching, religion and etiquette until 1865 when Lewis Carroll introduced his book Alice in Wonderland. In 1876 Mark Twain published Tom Sawyer followed soon by Huckleberry Finn. These books introduced a new concept of children's life and were the precedent for fun and nonsense. A few examples of our books for children are: Round About Tales, Wee Girls and Boys, Teddy Bears, Mother Goose and Chidren At Home.

At the far and of this pleasant room the “nanny” or children's nurse is sitting in a rocking chair where she can watch over all activites. She is a Martha Chase manikin as is the life size baby doll she holds in her lap. Martha Jenks Chase was the daughter of a physician. She created dolls beginning in 1889 from stockinette and cloth and painted them in oils. Some dolls were fully painted and washable and some were designed for use in hospital training programs. The children's nurse was very important in the Victorian family. She was responsible for much of the children's training especially in large families.

The dolls in the children's room are reminiscent of the late 1800's and early 1900. WE are fortunate to have several china head dolls. The heads were made of glazed china with painted hair and faces. The hair style of these dolls often helps to identify the approximate year they were produced. The bodies were of cloth or leather and the limbs of china or leather. The earliest china dolls had brown eyes. Blue eyes were popular later.

Our doll collection also boasts some lovely dolls with heads made of bisque (unglezed china). These dolls have wigs and open-close eyes and leather bodies. Many of these dolls were first made in Germany and imported by the United States. Some began appearing about 1860. At first these dolls were made in Germany in homes with the whole family involved. This was later expanded to a cottage industry where one family painted faces, another made bodies, others stuffed and sewed, while another family costumed the dolls. Eventually factories opened employing the hometown specialists. Patents were obtained and competition grew. In our children's playroom the dolls are having a tea party with tiny cups and saucers of china made aspecially for their little hands.

We are also fortunate to have Flossie in our doll family. She was made only in the year 1873-1874. She was created of hard rock maple, has mortise and tenon joints and metal hands and feet. She is dressed appropriately according to the late 1800's.

There are several items of doll furniture to help a little girl play house such as a Schoenhut piano introduced about 1872, several doll cradles and a dresser with a mirror.

Boys were interested in outdoor play and you can see examples such as ice skates and sleds. The skates were made of wood and leather. Toy Wagons, blocks, tin soldiers, a drum and some hand made marbles are also exhibited. Toy vehicles such as trucks and fire engines were made of tin and iron. Noah's Ark was a popular toy. We now have two on exhibit one from the late 1800 and another one early 1900.

I hope you have enjoyed reading about the Children's Room in the Museum.

Come and visit us soon. See for yourself the wonderful artifacts we have accumulated within the Museum for you to enjoy.