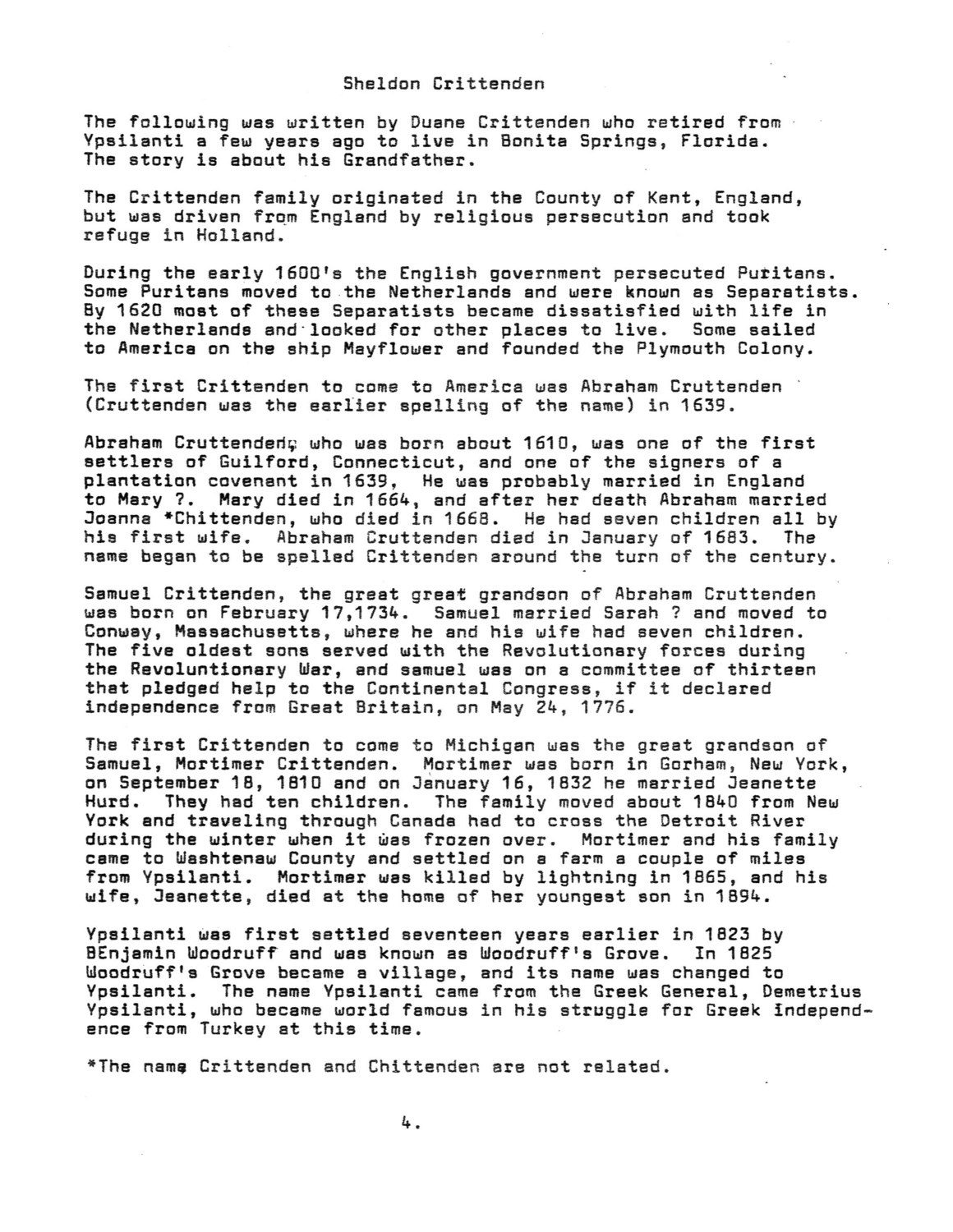 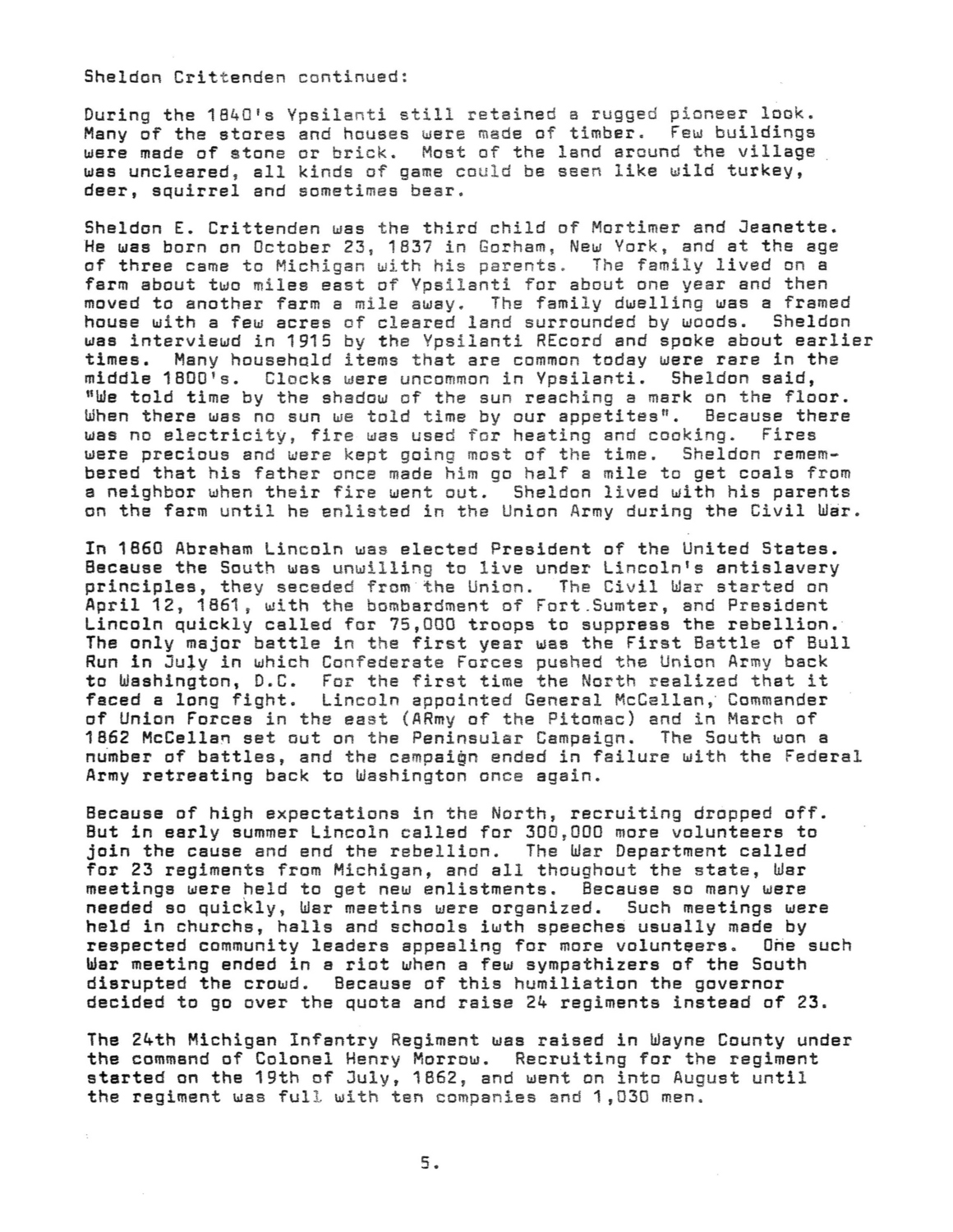 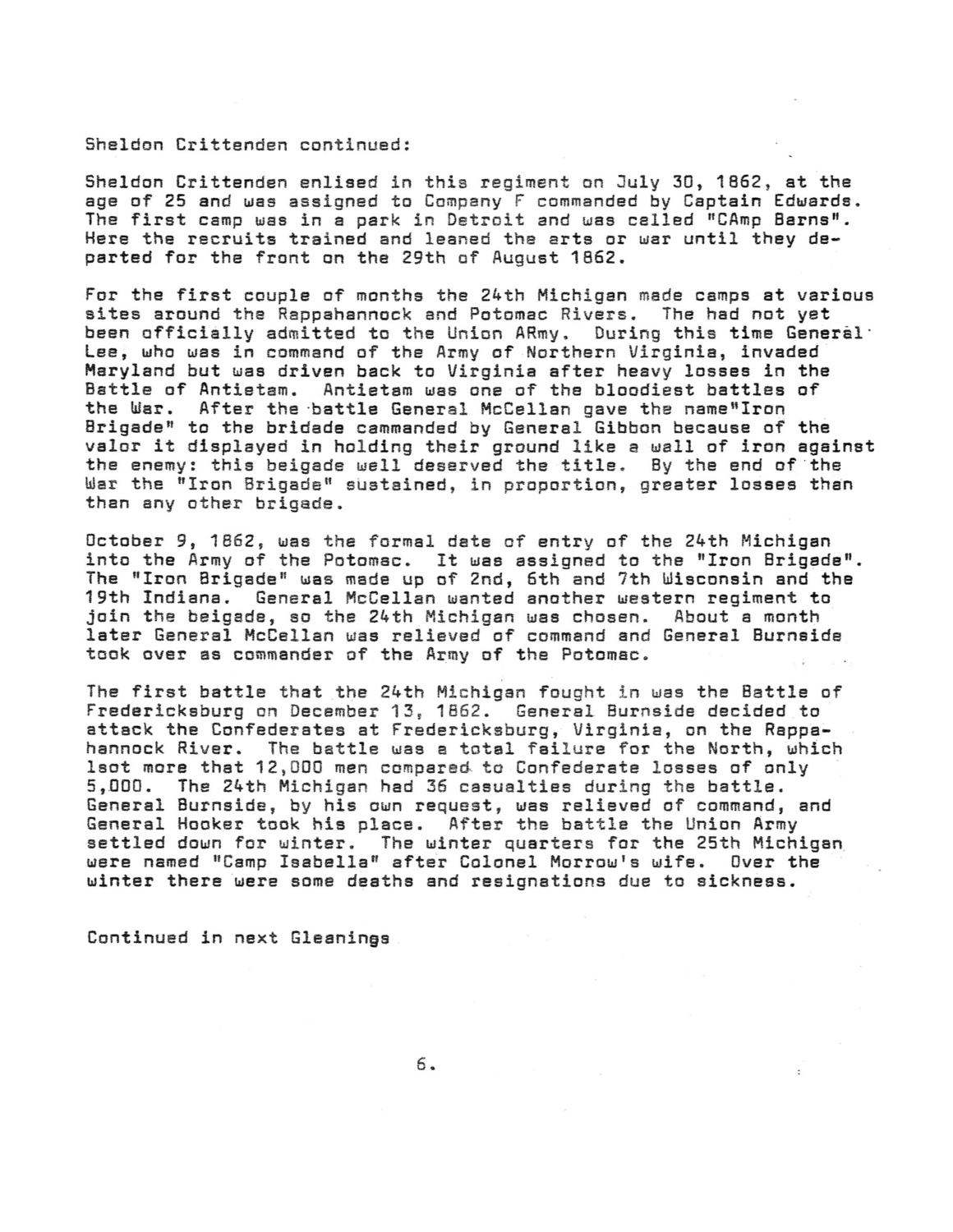 The following was written by Duane Crittenden who retired from Ypsilanti a few years ago to live in Bonita Springs, Florida. The story is about his Grandfather.

The Crittenden family originated in the County of Kent, England, but was driven from England by religious persecution and took refuge in Holland.

During the early 1600's the English government persecuted Puritans. Some Puritans moved to the Netherlands and were known as Separatists. By 1620 most of these Separatists became dissatisfied with life in the Netherlands and looked for other places to live. Some sailed to America on the ship Mayflower and founded the Plymouth Colony.

The first Crittenden to come to America was Abraham Cruttenden (Cruttenden was the earlier spelling of the name) in 1639.

Abraham Cruttenderin who was born about 1610, was one of the first settlers of Guilford, Connecticut, and one of the signers of a plantation covenant in 1639. He was probably married in England to Mary ?. Mary died in 1664, and after her death Abraham married Joanna Chittenden, who died in 1668. He had seven children all by his first wife. Abraham Cruttenden died in January of 1683. The name began to be spelled Crittenden around the turn of the century.

Samuel Crittenden, the great great grandson of Abraham Cruttenden was born on February 17,1734. Samuel married Sarah ? and moved to Conway, Massachusetts, where he and his wife had seven children. The five oldest sons served with the Revolutionary forces during the Revoluntionary War, and samuel was on a committee of thirteen that pledged help to the Continental Congress, if it declared independence from Great Britain, on May 24, 1776.

The first Crittenden to come to Michigan was the great grandson of Samuel, Mortimer Crittenden. Mortimer was born in Gorham, New York, on September 18, 1810 and on January 16, 1832 he married Jeanette Hurd. They had ten children. The family moved about 1840 from New York and traveling through Canada had to cross the Detroit River during the winter when it was frozen over. Mortimer and his family came to Washtenaw County and settled on a farm a couple of miles from Ypsilanti. Mortimer was killed by lightning in 1865, and his wife, Jeanette, died at the home of her youngest son in 1894.

Ypsilanti was first settled seventeen years earlier in 1823 by Benjamin Woodruff and was known as Woodruff's Grove. In 1825 Woodruff's Grove became a village, and its name was changed to Ypsilanti. The name Ypsilanti came from the Greek General, Demetrius Ypsilanti, who became world famous in his struggle for Greek independ ence from Turkey at this time.

*The name Crittenden and Chittenden are not related.

the 1840's Ypsilanti still retained a rugged pioneer look. Many of the stores and houses were made of timber. Few buildings were made of stone or brick. Most of the land around the village was uncleared, all kinds of game could be seen like wild turkey, deer, squirrel and sometimes bear.

Sheldon E. Crittenden was the third child of Mortimer and Jeanette. He was born on October 23, 1837 in Gorham, New York, and at the age of three came to Michigan with his parents. The family lived on a farm about two miles east of Ypsilanti for about one year and then moved to another farm a mile away. The family dwelling was a framed house with a few acres of cleared land surrounded by woods. Sheldon was interviewd in 1915 by the Ypsilanti Record and spoke about earlier times. Many household items that are common today were rare in the middle 1800's. Clocks were uncommon in Ypsilanti. Sheldon said, “We told time by the shadow of the sun reaching a mark on the floor. When there was no sun we told time by our appetites”. Because there was no electricity, fire was used for heating and cooking. Fires were precious and were kept going most of the time. Sheldon remembered that his father once made him go half a mile to get coals from a neighbor when their fire went out. Sheldon lived with his parents on the farm until he enlisted in the Union Army during the Civil War.

In 1860 Abraham Lincoln was elected President of the United States. Because the South was unwilling to live under Lincoln's antislavery principles, they seceded from the Union. The Civil War started on April 12, 1861, with the bombardment of Fort Sumter, and President Lincoln quickly called for 75,000 troops to suppress the rebellion. The only major battle in the first year was the First Battle of Bull Run in July in which Confederate Forces pushed the Union Army back to Washington, D.C. For the first time the North realized that it faced a long fight. Lincoln appointed General McCellan, Commander of Union Forces in the east (ARmy of the Pitomac) and in March of 1862 McCellan set out on the Peninsular Campaign. The South won a number of battles, and the campaign ended in failure with the Federal Army retreating back to Washington once again.

Because of high expectations in the North, recruiting dropped off. But in early summer Lincoln called for 300,000 more volunteers to join the cause and end the rebellion. The War Department called for 23 regiments from Michigan, and all thoughout the state, War meetings were held to get new enlistments. Because so many were needed so quickly, War meetins were organized. Such meetings were held in churchs, halls and schools iwth speeches usually made by respected community leaders appealing for more volunteers. One such War meeting ended in a riot when a few sympathizers of the South disrupted the croud. Because of this humiliation the governor decided to go over the quota and raise 24 regiments instead of 23.

The 24th Michigan Infantry Regiment was raised in Wayne County under the command of Colonel Henry Morrow. Recruiting for the regiment started on the 19th of July, 1862, and went on into August until the regiment was full with ten companies and 1,030 men.

Sheldon Crittenden enlised in this regiment on July 30, 1862, at the age of 25 and was assigned to Company F commanded by Captain Edwards. The first camp was in a park in Detroit and was celled “CAmp Barns”. Here the recruits trained and leaned the arts or war until they departed for the front on the 29th of August 1862.

For the first couple of months the 24th Michigan made camps at various sites around the Rappahannock and Potomac Rivers. The had not yet been officially admitted to the Union Army. During this time General Lee, who was in command of the Army of Northern Virginia, invaded Maryland but was driven back to Virginia after heavy losses in the Battle of Antietam. Antietam was one of the bloodiest battles of the War. After the battle General McCellan gave the name “Iron Brigade” to the brigade cammanded by General Gibbon because of the valor it displayed in holding their ground like a wall of iron against the enemy: this beigads well deserved the title. By the end of the War the “Iron Brigade” sustained, in proportion, greater losses than than any other brigade.

October 9, 1862, was the formal date of entry of the 24th Michigan into the Army of the Potomac. It was assigned to the “Iron Brigade”. The “Iron Brigade” was made up of 2nd, 6th and 7th Wisconsin and the 19th Indiana. General McCellan wanted another western regiment to join the beigade, so the 24th Michigan was chosen. About a month later General McCellan was relieved of command and General Burnside took over as commander of the Army of the Potomac.

The first battle that the 24th Michigan fought in was the Battle of Fredericksburg on December 13, 1862. General Burnside decided to attack the Confederates at Fredericksburg, Virginia, on the Rappa-hannock River. The battle was a total failure for the North, which lsot more that 12,000 men compared to Confederate losses of only 5,000. The 24th Michigan had 36 casualties during the battle. General Burnside, by his own request, was relieved of command, and General Hooker took his place. After the battle the Union Army settled down for winter. The winter quarters for the 25th Michigan were named “Camp Isabella” after Colonel Morrow's wife. Over the winter there were some deaths and resignations due to sickness.