Fourth of July: The Day at Ypsilanti 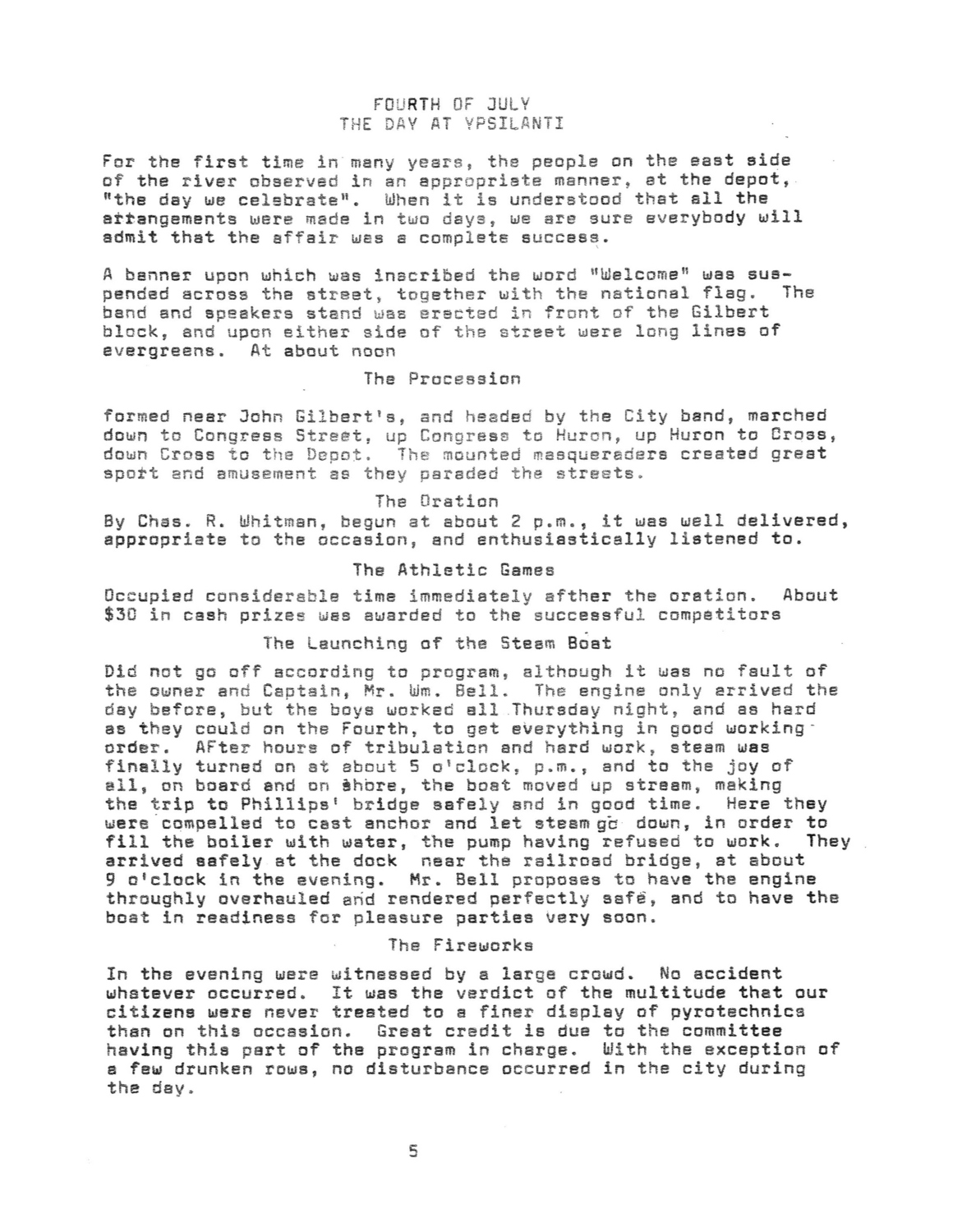 For the first time in many years, the people on the east side of the river observed in an appropriate manner, at the depot, “the day we celebrate”. When it is understood that all the arrangements were made in two days, we are sure everybody will admit that the affair was a complets success.

A banner upon which was inscribed the word “Welcome” was suspended across the street, together with the national flag. The band and speakers stand was erected in front of the Gilbert block, and upon either side of the street were long lines of evergreens. At about noon

formed near John Gilbert's, and headed by the City band, marched down to Congress Street, up Congress to Huron, up Huron to Cross, down Cross to the Depot. The mounted masqueraders created great sport and amusement as they paraded the streets.

By Chas. R. Whitman, begun at about 2 p.m., it was well delivered, appropriate to the occasion, and enthusiastically listened to.

Occupied considerable time immediately afther the oration. About &dollar;30 in cash prizes was awarded to the successful competitors

The Launching of the Steam Boat

Did not go off according to program, although it was no fault of the owner and Captain, Mr. Wm. Bell. The engine only arrived the day before, but the boys worked all Thursday night, and as hard as they could on the Fourth, to get everything in good working order. After hours of tribulation and hard work, steam was finally turned on at about 5 o'clock, p.m., and to the joy of all, on board and on shore, the boat moved up stream, making the trip to Phillips' bridge safely and in good time. Here they were compelled to cast anchor and let steam down, in order to fill the boiler with water, the pump having refused to work. They arrived safely at the dock near the railroad bridge, at about 9 o'clock in the evening. Mr. Bell proposes to have the engine throughly overhauled and rendered perfectly safe, and to have the boat in readiness for pleasure parties very soon.

In the evening were witnessed by a large crowd. No accident whatever occurred. It was the verdict of the multitude that our citizens were never treated to a finer display of pyrotechnics than on this occasion. Great credit is due to the committee having this part of the program in charge. With the exception of a few drunken rows, no disturbance occurred in the city during the day.