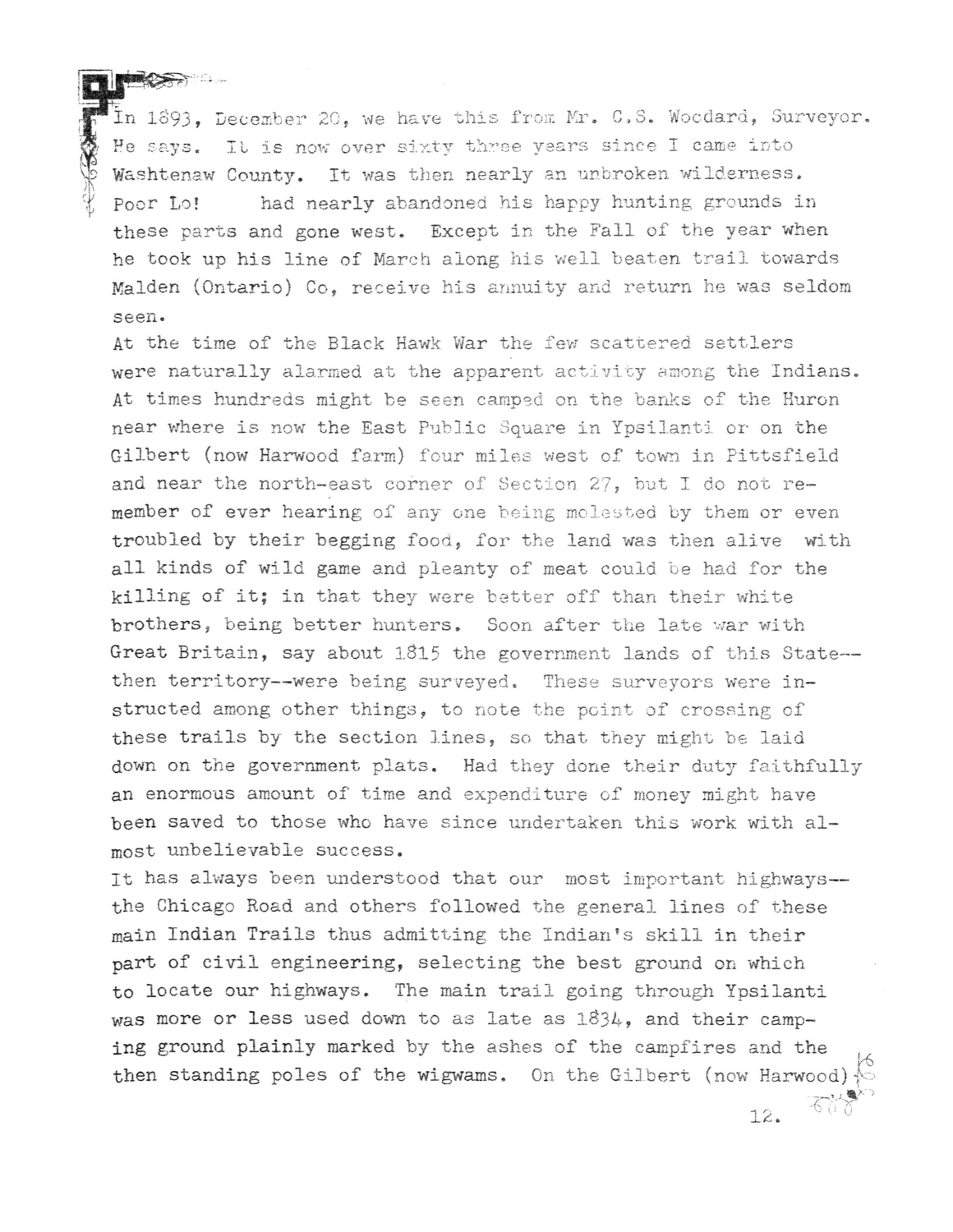 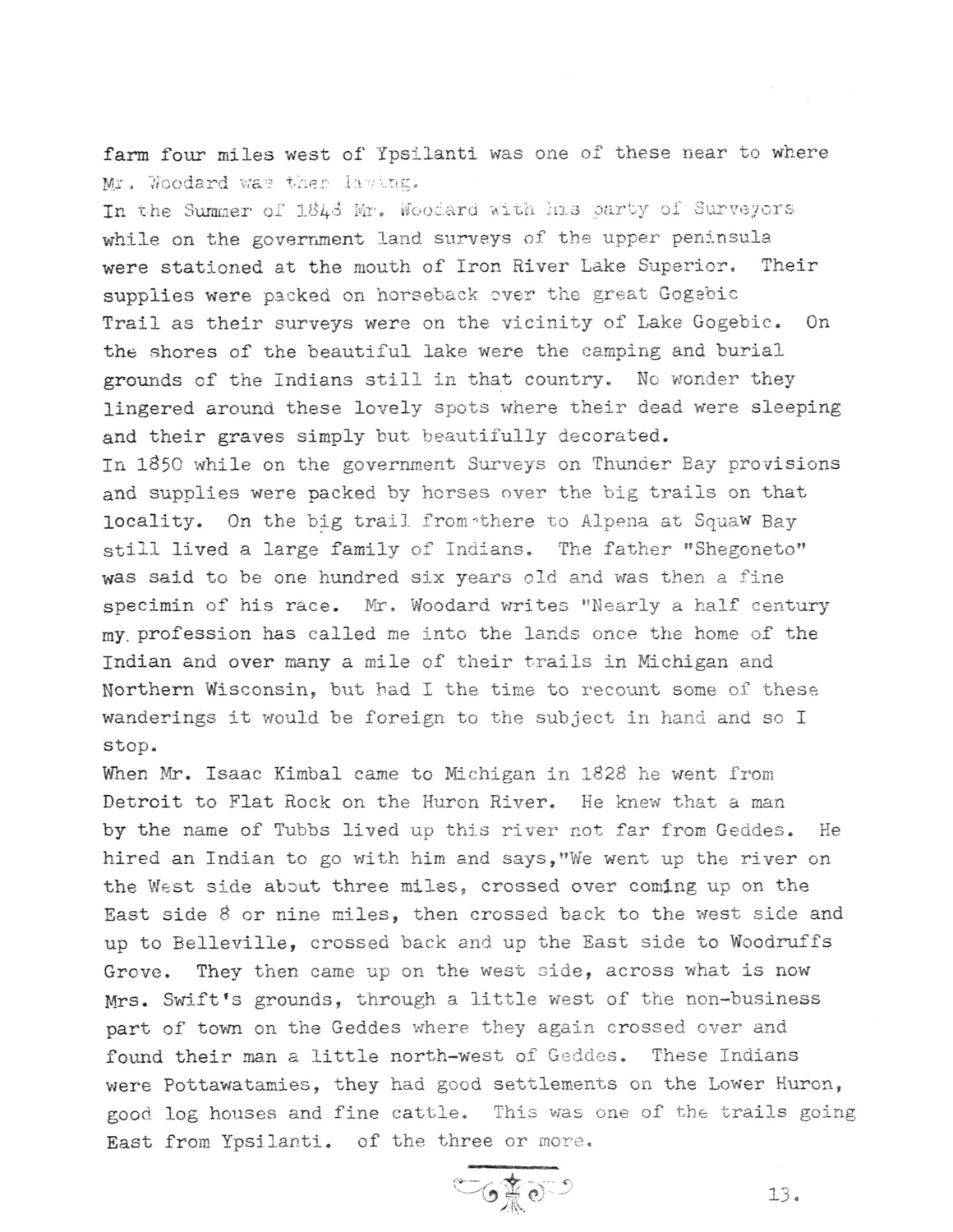 In 1893, December 20, we have this from Mr. C.S. Woodard, Surveyor. He says. It is now over sixty three years since I came into Washtenaw County. It was then nearly an unbroken wilderness. Poor Lo! had nearly abandoned his happy hunting grounds in these parts and gone west. Except in the Fall of the year when he took up his line of March along his well beaten trail towards Malden (Ontario) Co, receive his annuity and return he was seldom seen.

At the time of the Black Hawk War the few scattered settlers were naturally alarmed at the apparent activity among the Indians. At times hundreds might be seen camped on the banks of the Huron near where is now the East Public Square in Ypsilanti or on the Gilbert (now Harwood farm) four miles west of town in Pittsfield and near the north-east corner of Section 27, but I do not remember of ever hearing of any one being molested by them or even troubled by their begging food, for the land was then alive with all kinds of wild game and plenty of meat could be had for the killing of it; in that they were better off than their white brothers, being better hunters. Soon after the late war with Great Britain, say about 1815 the government lands of this State–then territory—were being surveyed. These surveyors were instructed among other things, to note the point of crossing of these trails by the section lines, so that they might be laid down on the government plats. Had they done their duty faithfully an enormous amount of time and expenditure of money might have been saved to those who have since undertaken this work with almost unbelievable success.

It has always been understood that our most important highways–-the Chicago Road and others followed the general lines of these main Indian Trails thus admitting the Indian's skill in their part of civil engineering, selecting the best ground on which to locate our highways. The main trail going through Ypsilanti was more or less used down to as late as 1834, and their camping ground plainly marked by the ashes of the campfires and the then standing poles of the wigwams. On the Gilbert (now Harwood) farm four miles west of Ypsilanti was one of these near to where Mr. Woodard was then .

In the Summer of 1845 Mr. Woodard with party of Surveyors while on the government land surveys of the upper peninsula were stationed at the mouth of Iron River Lake Superior. Their supplies were packed on horseback over the great Gogebic Trail as their surveys were on the vicinity of Lake Gogebic. On the shores of the beautiful lake were the camping and burial grounds of the Indians still in that country. No wonder they lingered around these lovely spots where their dead were sleeping and their graves simply but beautifully decorated.

In 1850 while on the government Surveys on Thunder Bay provisions and supplies were packed by horses over the big trails on that locality. On the big trail from there to Alpena at Squaw Bay still lived a large family of Indians. The father “Shegoneto” was said to be one hundred six years old and was then a fine specimen of his race. Mr. Woodard writes “Nearly a half century my profession has called me into the lands once the home of the Indian and over many a mile of their trails in Michigan and Northern Wisconsin, but had I the time to recount some of these wanderings it would be foreign to the subject in hand and so I stop.

When Mr. Isaac Kimbal came to Michigan in 1828 he went from Detroit to Flat Rock on the Huron River. He knew that a man by the name of Tubbs lived up this river not far from Geddes. He hired an Indian to go with him and says, “We went up the river on the West side about three miles, crossed over coming up on the East side 8 or nine miles, then crossed back to the west side and up to Belleville, crossed back and up the East side to Woodruffs Grove. They then came up on the west side, across what is now Mrs. Swift's grounds, through a little west of the non-business part of town on the Geddes where they again crossed over and found their man a little northwest of Geddes. These Indians were Pottawatamies, they had good settlements on the Lower Huron, good log houses and fine cattle. This was one of the trails going East from Ypsilanti of the three or more.