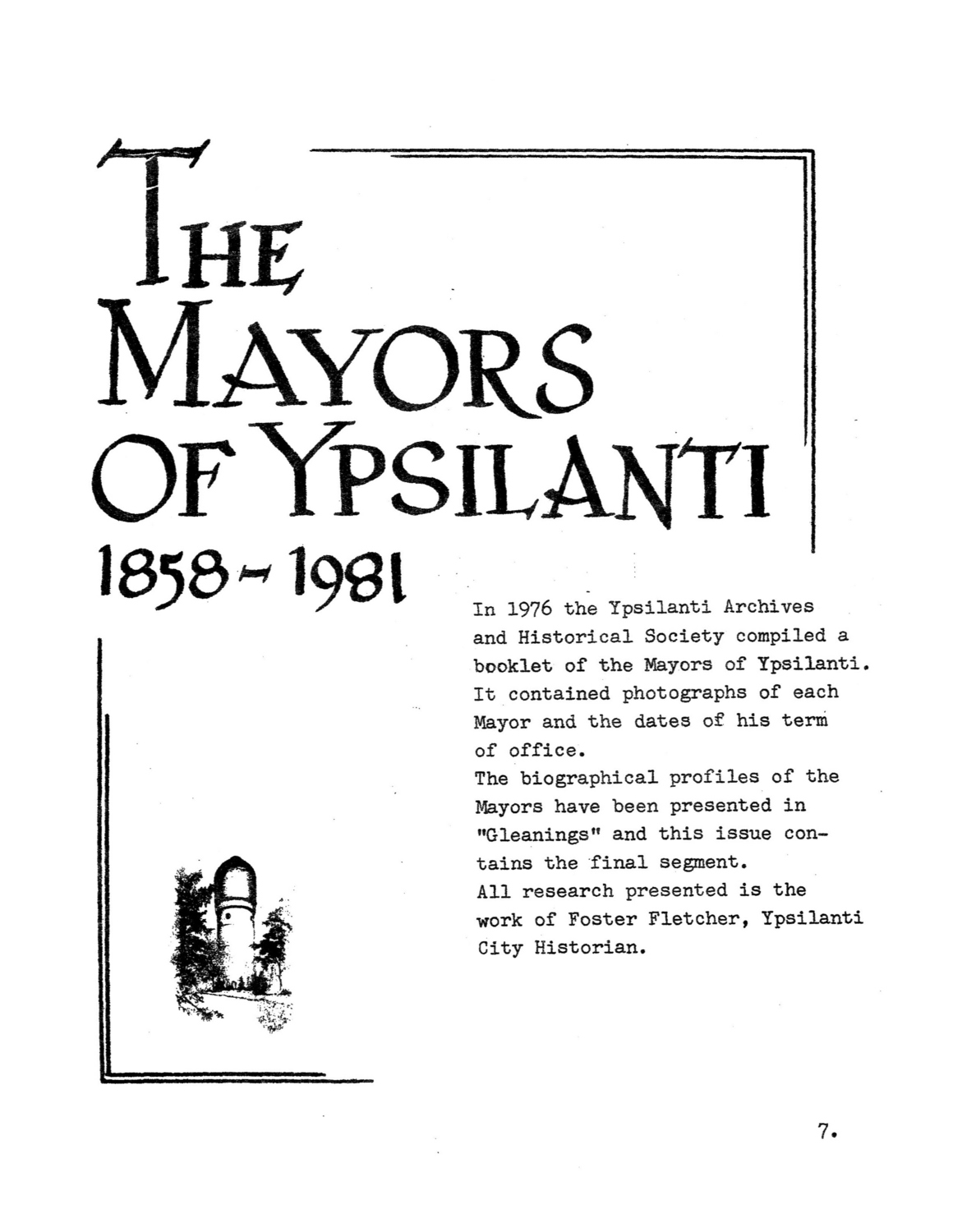 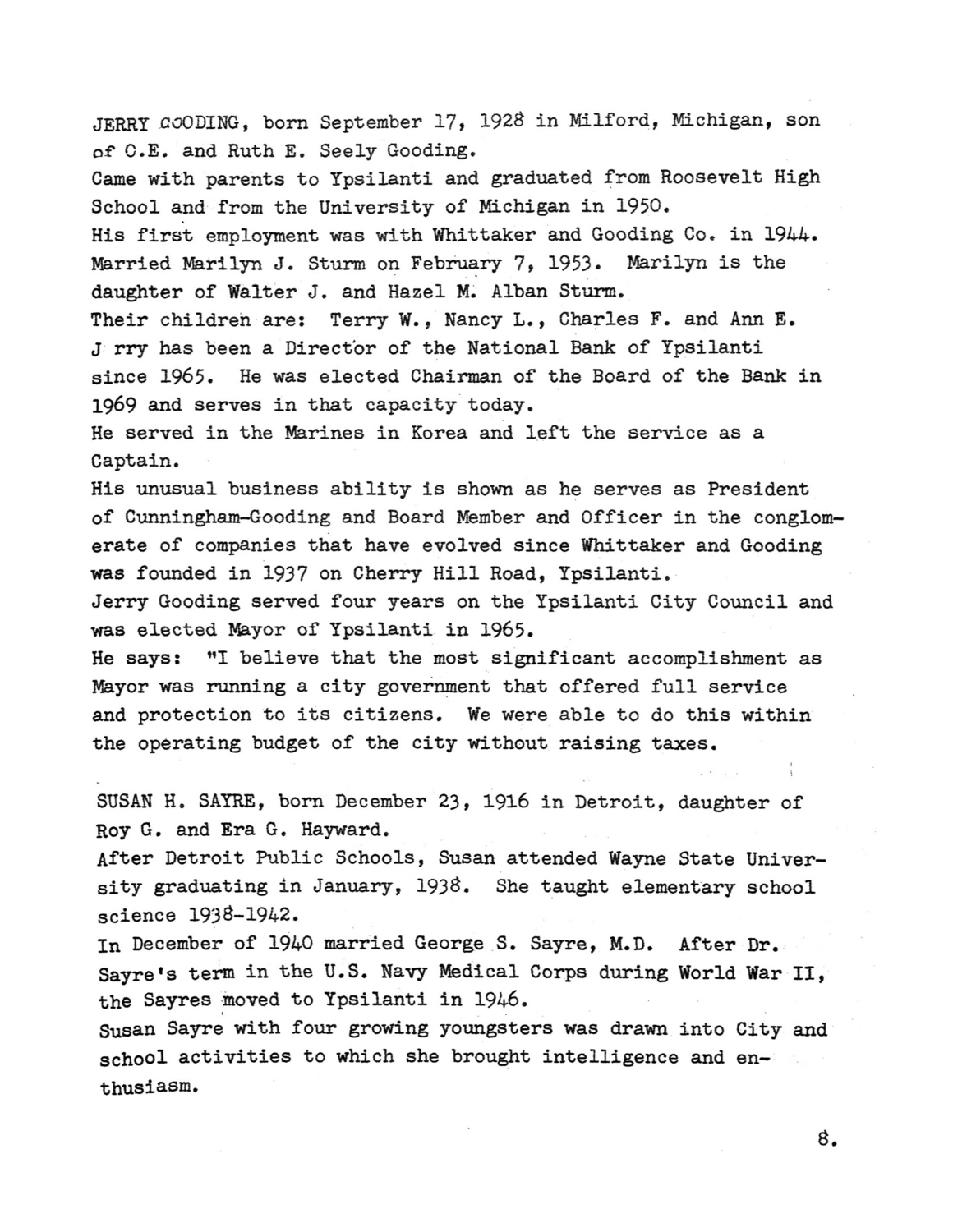 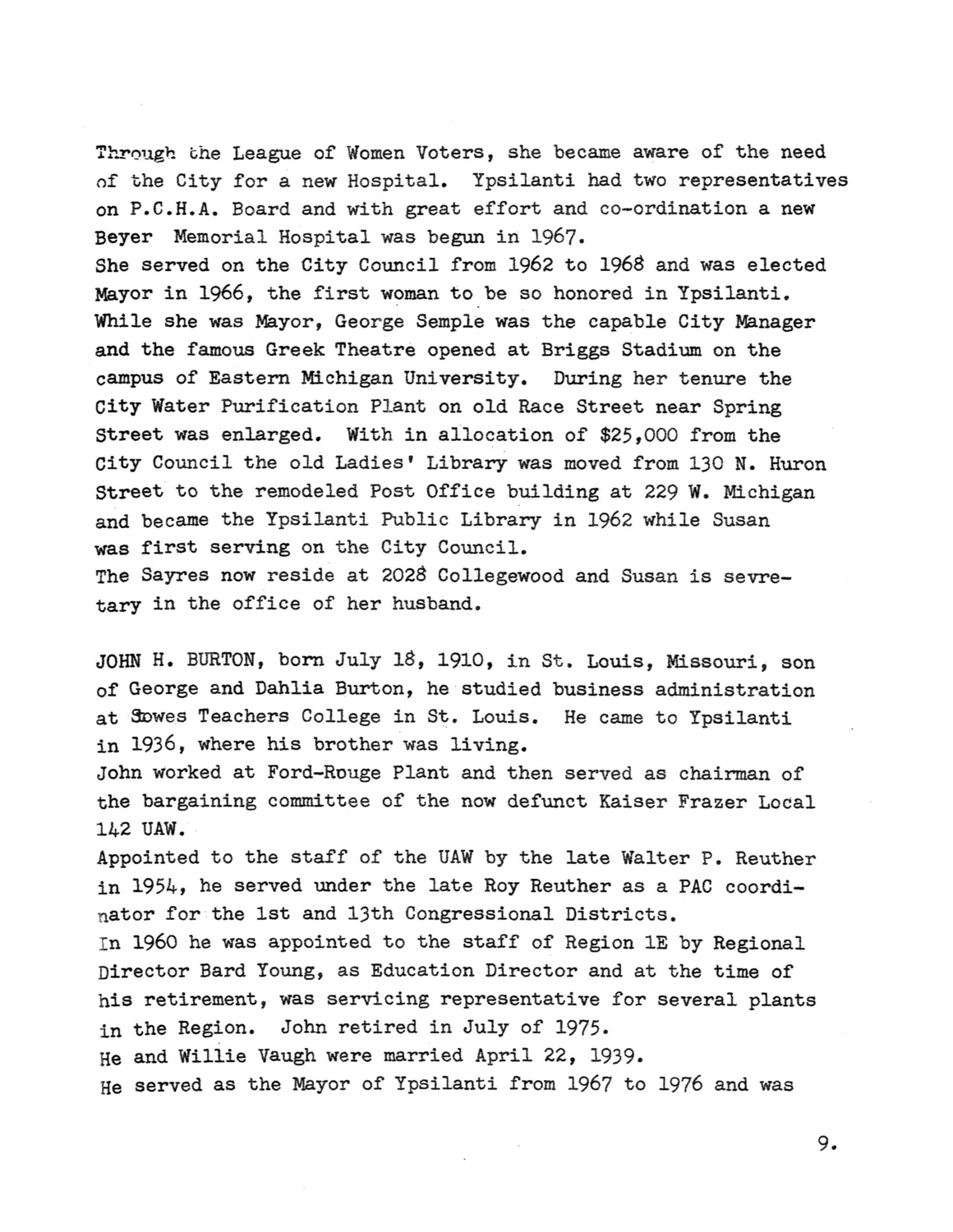 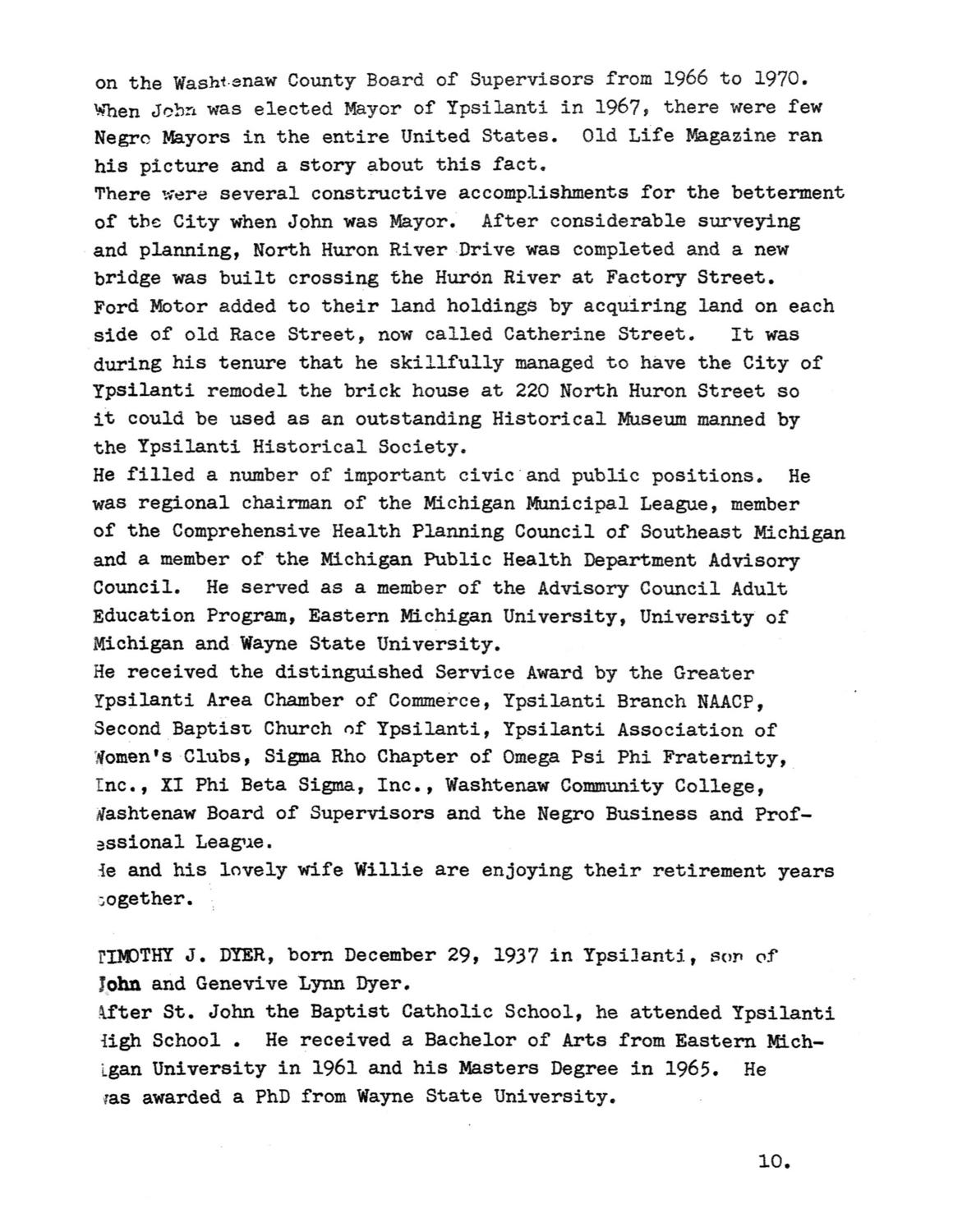 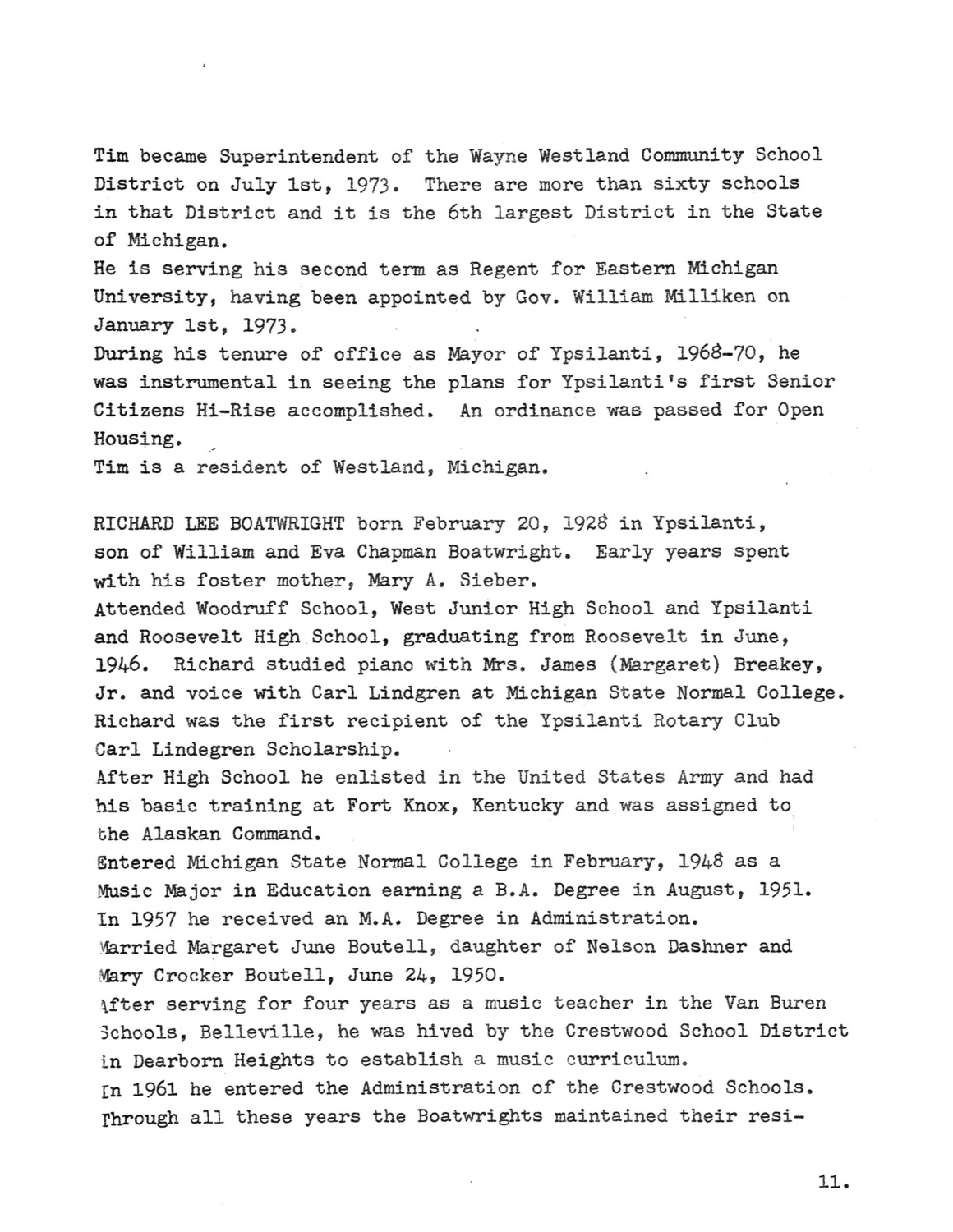 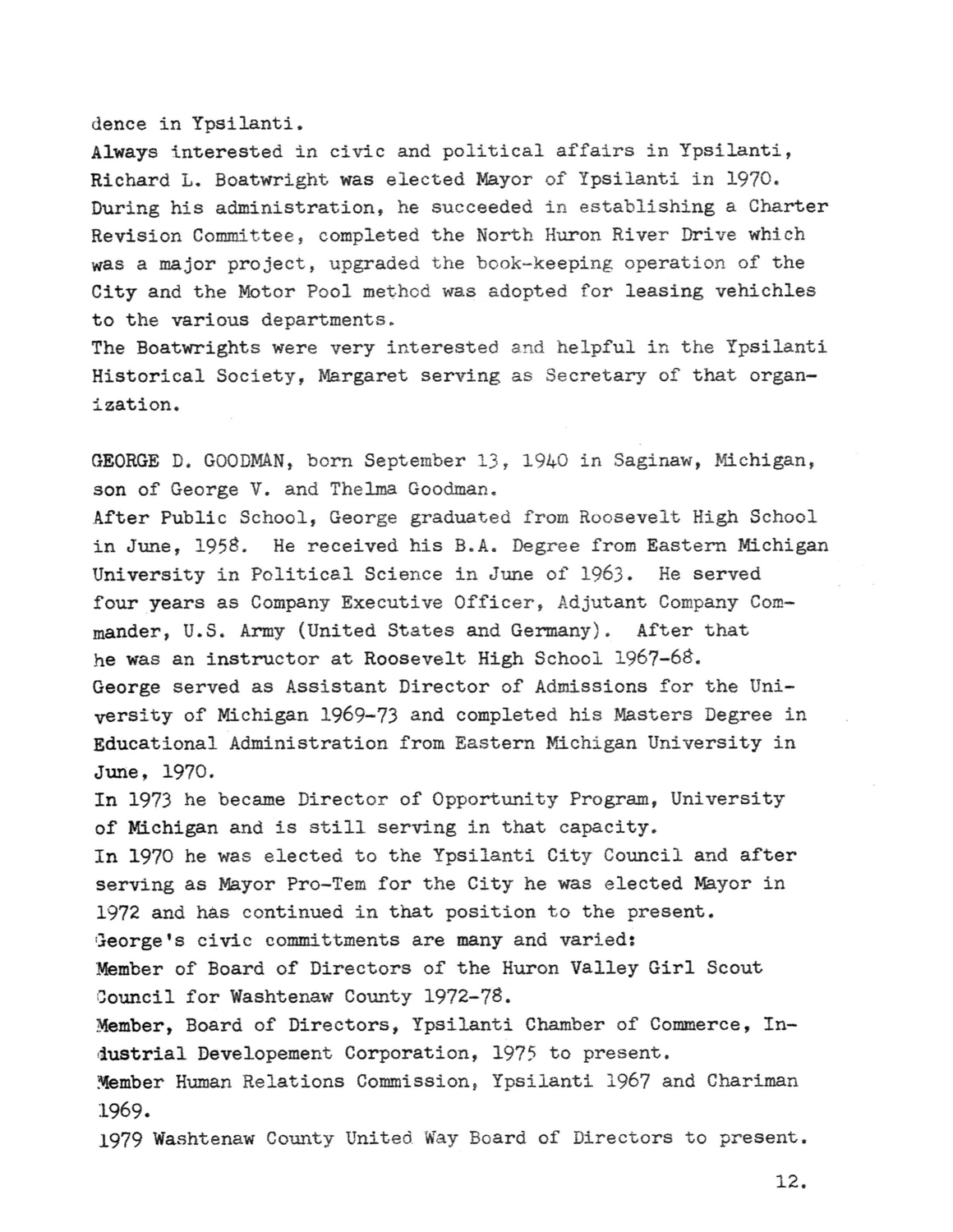 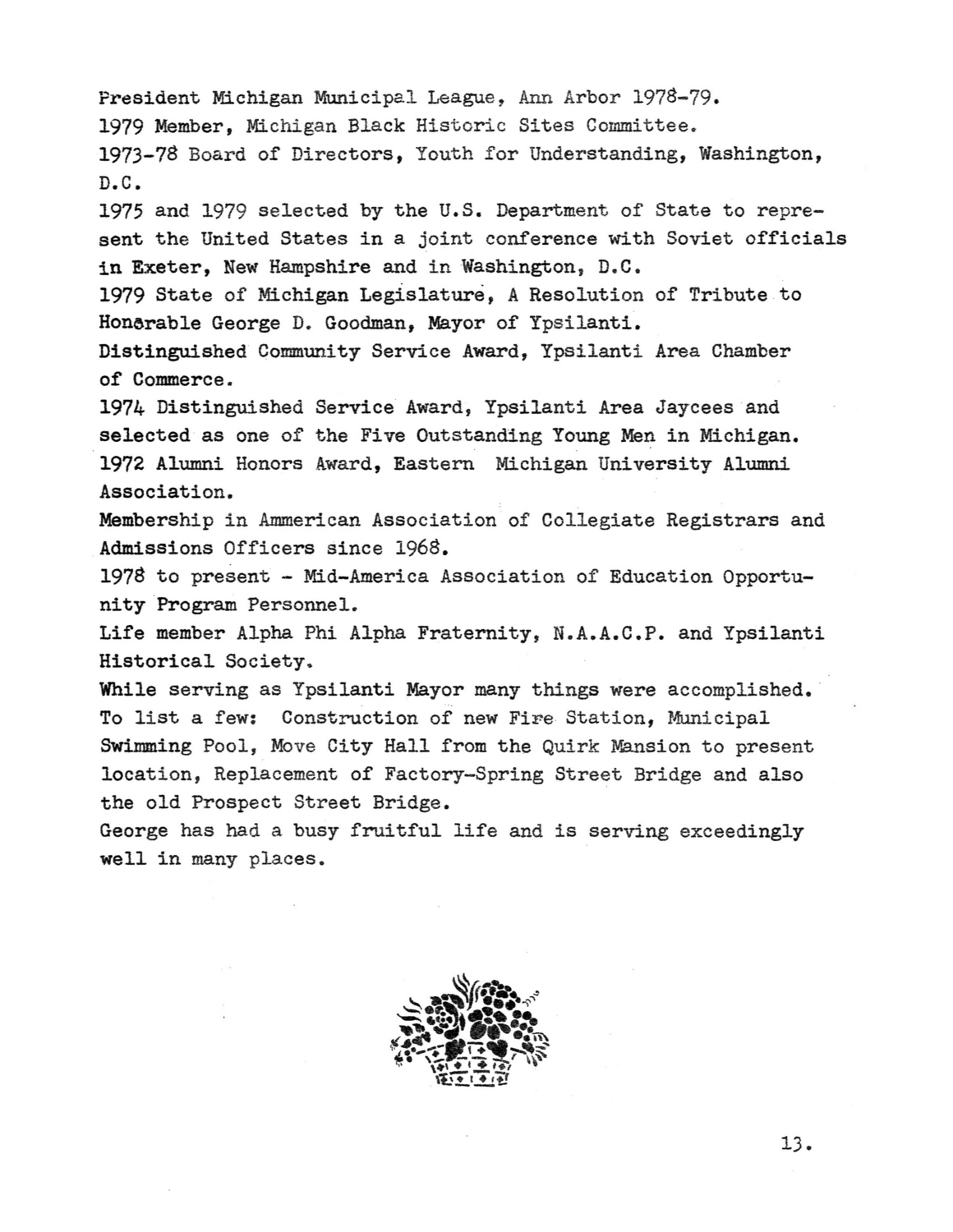 The biographical profiles of the Mayors have been presented in “Gleanings” and this issue contains the final segment.

Came with parents to Ypsilanti and graduated from Roosevelt High School and from the University of Michigan in 1950.

His first employment was with Whittaker and Gooding Co. in 1944. Married Marilyn J. Sturm on February 7, 1953. Marilyn is the daughter of Walter J. and Hazel M. Alban Sturm.

Their children are: Terry W., Nancy L., Charles F. and Ann E. Jerry has been a Director of the National Bank of Ypsilanti since 1965. He was elected Chairman of the Board of the Bank in 1969 and serves in that capacity today.

He served in the Marines in Korea and left the service as a Captain.

His unusual business ability is shown as he serves as President of Cunningham-Gooding and Board Member and Officer in the conglomerate of companies that have evolved since Whittaker and Gooding was founded in 1937 on Cherry Hill Road, Ypsilanti.

Jerry Gooding served four years on the Ypsilanti City Council and was elected Mayor of Ypsilanti in 1965.

He says: “I believe that the most significant accomplishment as Mayor was running a city government that offered full service and protection to its citizens. We were able to do this within the operating budget of the city without raising taxes.

In December of 1940 married George S. Sayre, M.D. After Dr. Sayre's term in the U.S. Navy Medical Corps during World War II, the Sayres moved to Ypsilanti in 1946.

Susan Sayre with four growing youngsters was drawn into City and school activities to which she brought intelligence and enthusiasm.

Through the League of Women Voters, she became aware of the need of the City for a new Hospital. Ypsilanti had two representatives on P.C.H.A. Board and with great effort and co-ordination a new Beyer Memorial Hospital was begun in 1967.

She served on the City Council from 1962 to 1968 and was elected Mayor in 1966, the first woman to be so honored in Ypsilanti. While she was Mayor, George Semple was the capable City Manager and the famous Greek Theatre opened at Briggs Stadium on the campus of Eastern Michigan University. During her tenure the City Water Purification Plant on old Race Street near Spring Street was enlarged. With in allocation of &dollar;25,000 from the City Council the old Ladies' Library was moved from 130 N. Huron Street to the remodeled Post Office building at 229 W. Michigan and became the Ypsilanti Public Library in 1962 while Susan was first serving on the City Council.

The Sayres now reside at 2028 Collegewood and Susan is sevretary in the office of her husband.

JOHN H. BURTON, born July 18, 1910, in St. Louis, Missouri, son of George and Dahlia Burton, he studied business administration at Stowes Teachers College in St. Louis. He came to Ypsilanti in 1936, where his brother was living.

John worked at Ford-Rouge Plant and then served as chairman of the bargaining committee of the now defunct Kaiser Frazer Local 142 UAW.

Appointed to the staff of the UAW by the late Walter P. Reuther in 1954, he served under the late Roy Reuther as a PAC coordinator for the 1st and 13th Congressional Districts.

In 1960 he was appointed to the staff of Region 1E by Regional Director Bard Young, as Education Director and at the time of his retirement, was servicing representative for several plants in the Region. John retired in July of 1975.

He served as the Mayor of Ypsilanti from 1967 to 1976 and was on the Washtenaw County Board of Supervisors from 1966 to 1970. When John was elected Mayor of Ypsilanti in 1967, there were few Negro Mayors in the entire United States. Old Life Magazine ran his picture and a story about this fact.

There were several constructive accomplishments for the betterment of the City when John was Mayor. After considerable surveying and planning, North Huron River Drive was completed and a new bridge was built crossing the Huron River at Factory Street. Ford Motor added to their land holdings by acquiring land on each side of old Race Street, now called Catherine Street. It was during his tenure that he skillfully managed to have the City of Ypsilanti remodel the brick house at 220 North Huron Street so it could be used as an outstanding Historical Museum manned by the Ypsilanti Historical Society.

He and his lovely wife Willie are enjoying their retirement years together.

After St. John the Baptist Catholic School, he attended Ypsilanti High School. He received a Bachelor of Arts from Eastern Michigan University in 1961 and his Masters Degree in 1965. He was awarded a PhD from Wayne State University.

Tim became Superintendent of the Wayne Westland Community School District on July 1st, 1973. There are more than sixty schools in that District and it is the 6th largest District in the State of Michigan.

He is serving his second term as Regent for Eastern Michigan University, having been appointed by Gov. William Milliken on January 1st, 1973.

During his tenure of office as Mayor of Ypsilanti, 1968–70, he was instrumental in seeing the plans for Ypsilanti's first Senior Citizens Hi-Rise accomplished. An ordinance was passed for Open Housing.

Tim is a resident of Westland, Michigan.

After High School he enlisted in the United States Army and had his basic training at Fort Knox, Kentucky and was assigned to the Alaskan Command.

Entered Michigan State Normal College in February, 1948 as a Music Major in Education earning a B.A. Degree in August, 1951. In 1957 he received an M.A. Degree in Administration.

After serving for four years as a music teacher in the Van Buren Schools, Belleville, he was hived by the Crestwood School District in Dearborn Heights to establish a music curriculum.

In 1961 he entered the Administration of the Crestwood Schools. Through all these years the Boatwrights maintained their residence in Ypsilanti.

Always interested in civic and political affairs in Ypsilanti, Richard L. Boatwright was elected Mayor of Ypsilanti in 1970. During his administration, he succeeded in establishing a Charter Revision Committee, completed the North Huron River Drive which was a major project, upgraded the book-keeping operation of the City and the Motor Pool method was adopted for leasing vehichles to the various departments.

The Boatwrights were very interested and helpful in the Ypsilanti Historical Society, Margaret serving as Secretary of that organization.

After Public School, George graduated from Roosevelt High School in June, 1958. He received his B. A. Degree from Eastern Michigan University in Political Science in June of 1963. He served four years as Company Executive Officer, Adjutant Company Commander, U.S. Army (United States and Germany). After that he was an instructor at Roosevelt High School 1967–68.

George served as Assistant Director of Admissions for the University of Michigan 1969–73 and completed his Masters Degree in Educational Administration from Eastern Michigan University in June, 1970.

In 1973 he became Director of Opportunity Program, University of Michigan and is still serving in that capacity.

In 1970 he was elected to the Ypsilanti City Council and after serving as Mayor Pro-Tem for the City he was elected Mayor in 1972 and has continued in that position to the present.

George's civic committments are many and varied: Member of Board of Directors of the Huron Valley Girl Scout Council for Washtenaw County 1972–78.

Member, Board of Directors, Ypsilanti Chamber of Commerce, Industrial Developement Corporation, 1975 to present.

1973–78 Board of Directors, Youth for Understanding, Washington, D.C.

1975 and 1979 selected by the U.S. Department of State to represent the United States in a joint conference with Soviet officials in Exeter, New Hampshire and in Washington, D.C.

1979 State of Michigan Legislature, A Resolution of Tribute to Honorable George D. Goodman, Mayor of Ypsilanti.

1974 Distinguished Service Award, Ypsilanti Area Jaycees and selected as one of the Five Outstanding Young Men in Michigan.

Membership in Ammerican Association of Collegiate Registrars and Admissions Officers since 1968.

While serving as Ypsilanti Mayor many things were accomplished. To list a few: Construction of new Fire Station, Municipal Swimming Pool, Move City Hall from the Quirk Mansion to present location, Replacement of Factory-Spring Street Bridge and also the old Prospect Street Bridge.

George has had a busy fruitful life and is serving exceedingly well in many places.