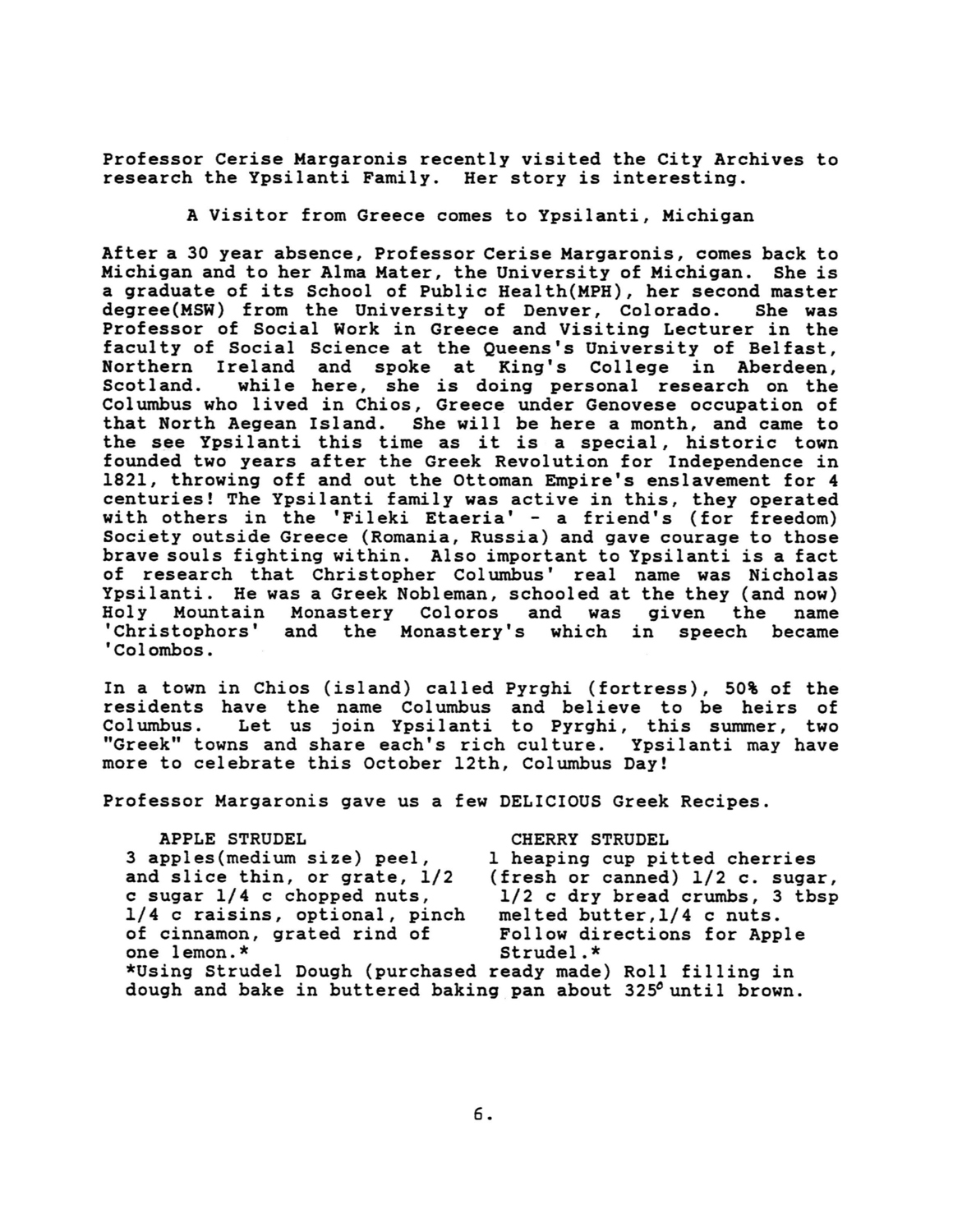 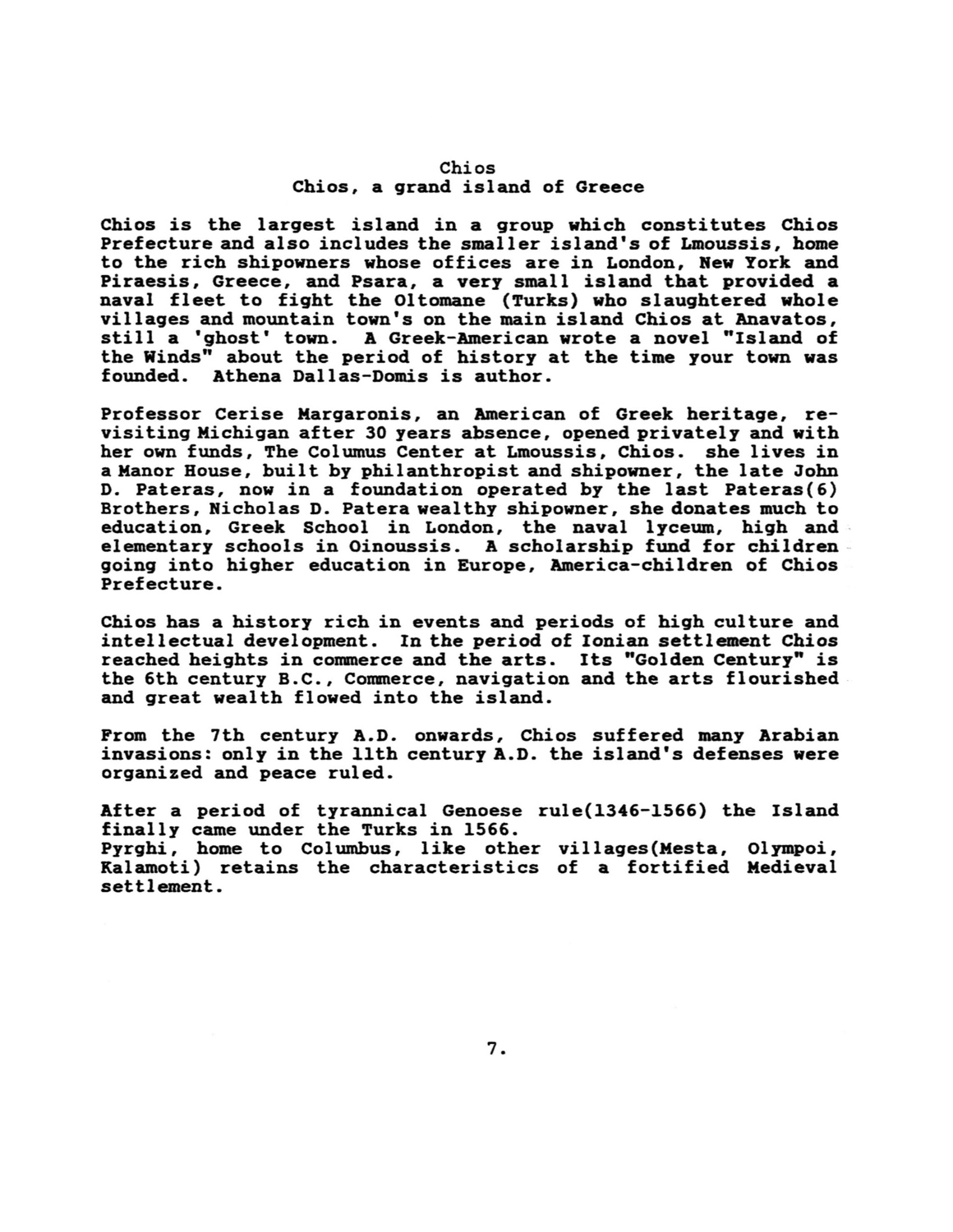 A Visitor from Greece comes to Ypsilanti, Michigan

After a 30 year absence, Professor Cerise Margaronis, comes back to Michigan and to her Alma Mater, the University of Michigan. She is a graduate of its School of Public Health (MPH), her second master degree (MSW) from the University of Denver, Colorado. She was Professor of Social Work in Greece and Visiting Lecturer in the faculty of Social Science at the Queens's University of Belfast, Northern Ireland and spoke at King's College in Aberdeen, Scotland. while here, she is doing personal research on the Columbus who lived in Chios, Greece under Genovese occupation of that North Aegean Island. She will be here a month, and came to the see Ypsilanti this time as it is a special, historic town founded two years after the Greek Revolution for Independence in 1821, throwing off and out the Ottoman Empire's enslavement for 4 centuries! The Ypsilanti family was active in this, they operated with others in the ‘Fileki Etaeria’-a friend's (for freedom) Society outside Greece (Romania, Russia) and gave courage to those brave souls fighting within. Also important to Ypsilanti is a fact of research that Christopher Columbus' real name was Nicholas Ypsilanti. He was a Greek Nobleman, schooled at the they (and now) Holy Mountain Monastery Coloros and was given the name ‘Christophers’ and the Monastery's which in speech became ‘Colombos’.

In a town in Chios (island) called Pyrghi (fortress), 50% of the residents have the name Columbus and believe to be heirs of Columbus. Let us join Ypsilanti to Pyrghi, this summer, two “Greek” towns and share each's rich culture. Ypsilanti may have more to celebrate this October 12th, Columbus Day!

*Using Strudel Dough (purchased ready made) Roll filling in dough and bake in buttered baking pan about 325† until brown.

Chios is the largest island in a group which constitutes Chios Prefecture and also includes the smaller island's of Lmoussis, home to the rich shipowners whose offices are in London, New York and Piraesis, Greece, and Psara, a very small island that provided a naval fleet to fight the Oltomane (Turks) who slaughtered whole villages and mountain town's on the main island Chios at Anavatos, still a ‘ghost’ town. A Greek-American wrote a novel “Island of the Winds” about the period of history at the time your town was founded. Athena Dallas-Domis is author.

Professor Cerise Margaronis, an American of Greek heritage, revisiting Michigan after 30 years absence, opened privately and with her own funds, The Columus Center at Lmoussis, Chios. she lives in a Manor House, built by philanthropist and shipowner, the late John D. Pateras, now in a foundation operated by the last Pateras (6) Brothers, Nicholas D. Patera wealthy shipowner, she donates much to education, Greek School in London, the naval lyceum, high and elementary schools in Oinoussis. A scholarship fund for children going into higher education in Europe, America-children of Chios Prefecture.

Chios has a history rich in events and periods of high culture and intellectual development. In the period of Ionian settlement Chios reached heights in commerce and the arts. Its “Golden Century” is the 6th century B.C., Commerce, navigation and the arts flourished and great wealth flowed into the island.

From the 7th century A.D. onwards, Chios suffered many Arabian invasions: only in the 11th century A.D. the island's defenses were organized and peace ruled.

Pyrghi, home to Columbus, like other villages (Mesta, Olympoi, Kalamoti) retains the characteristics of a fortified Medieval settlement.