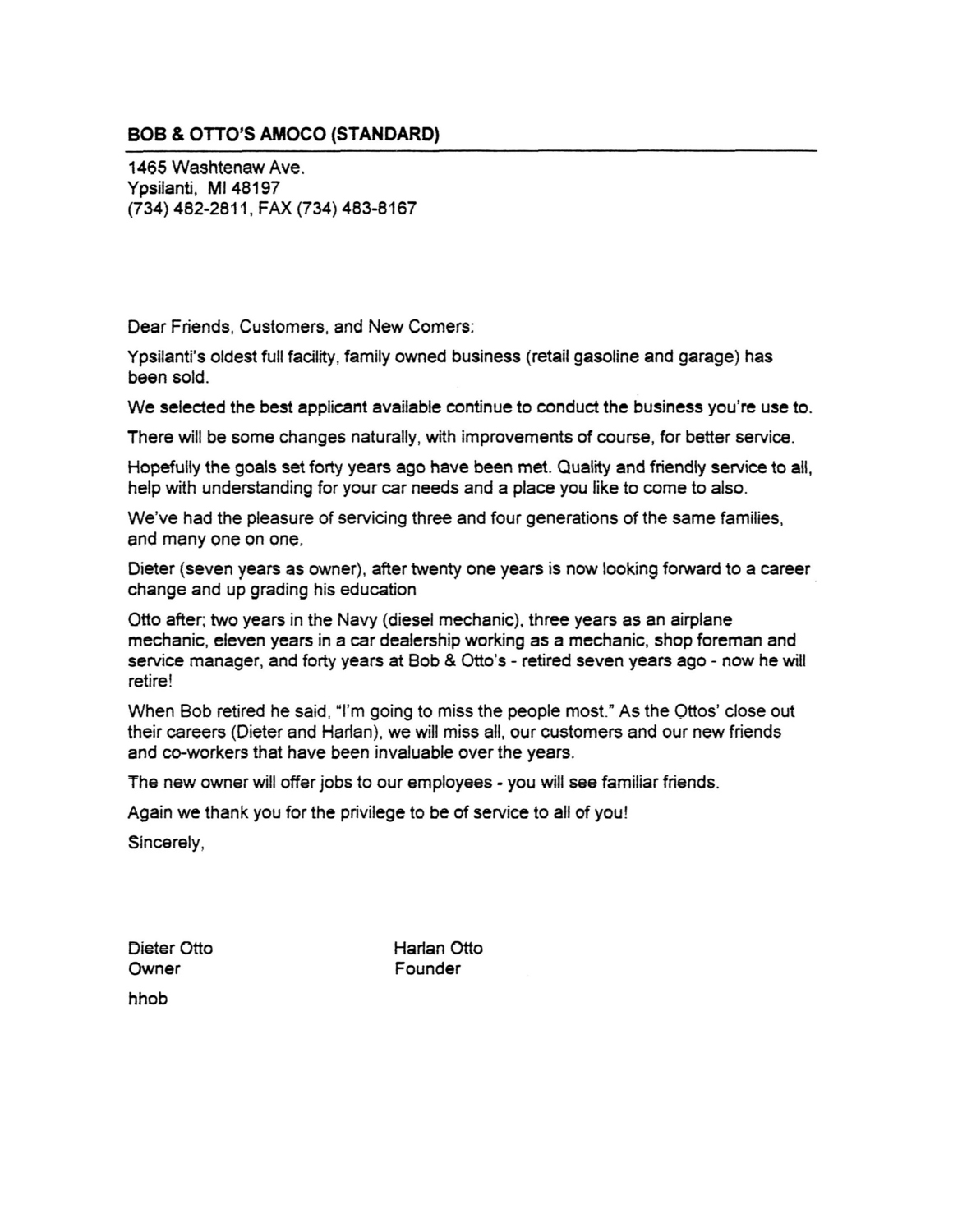 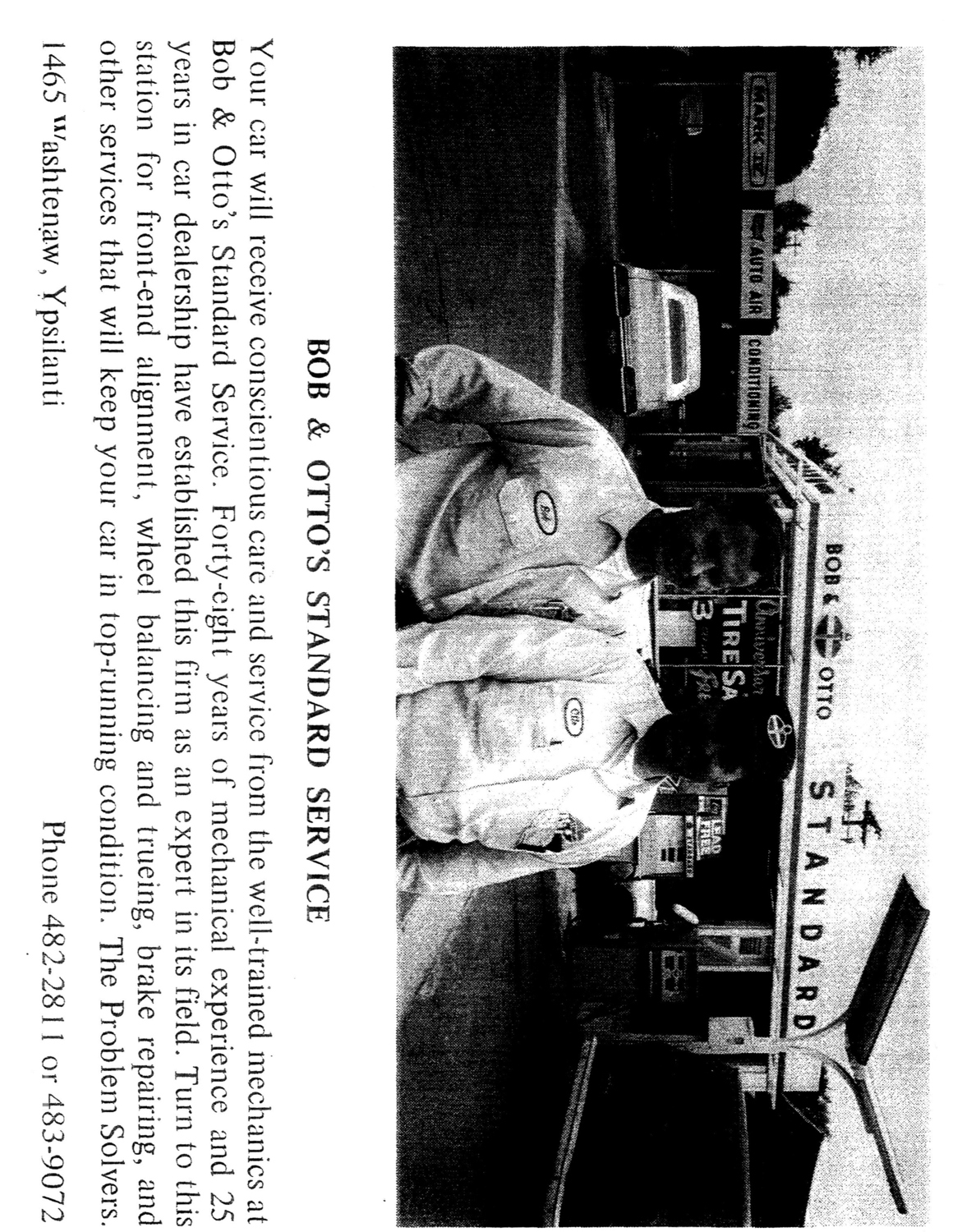 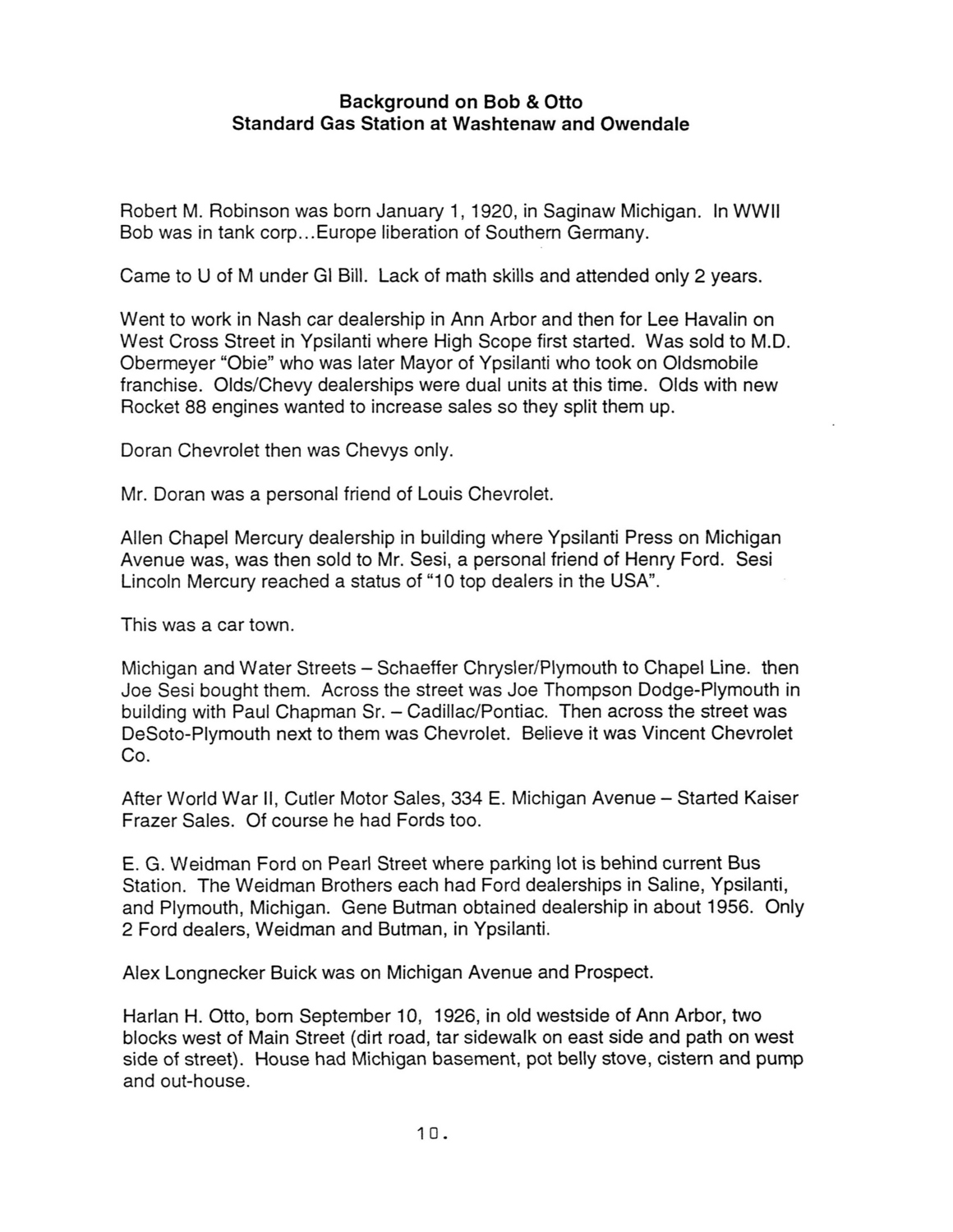 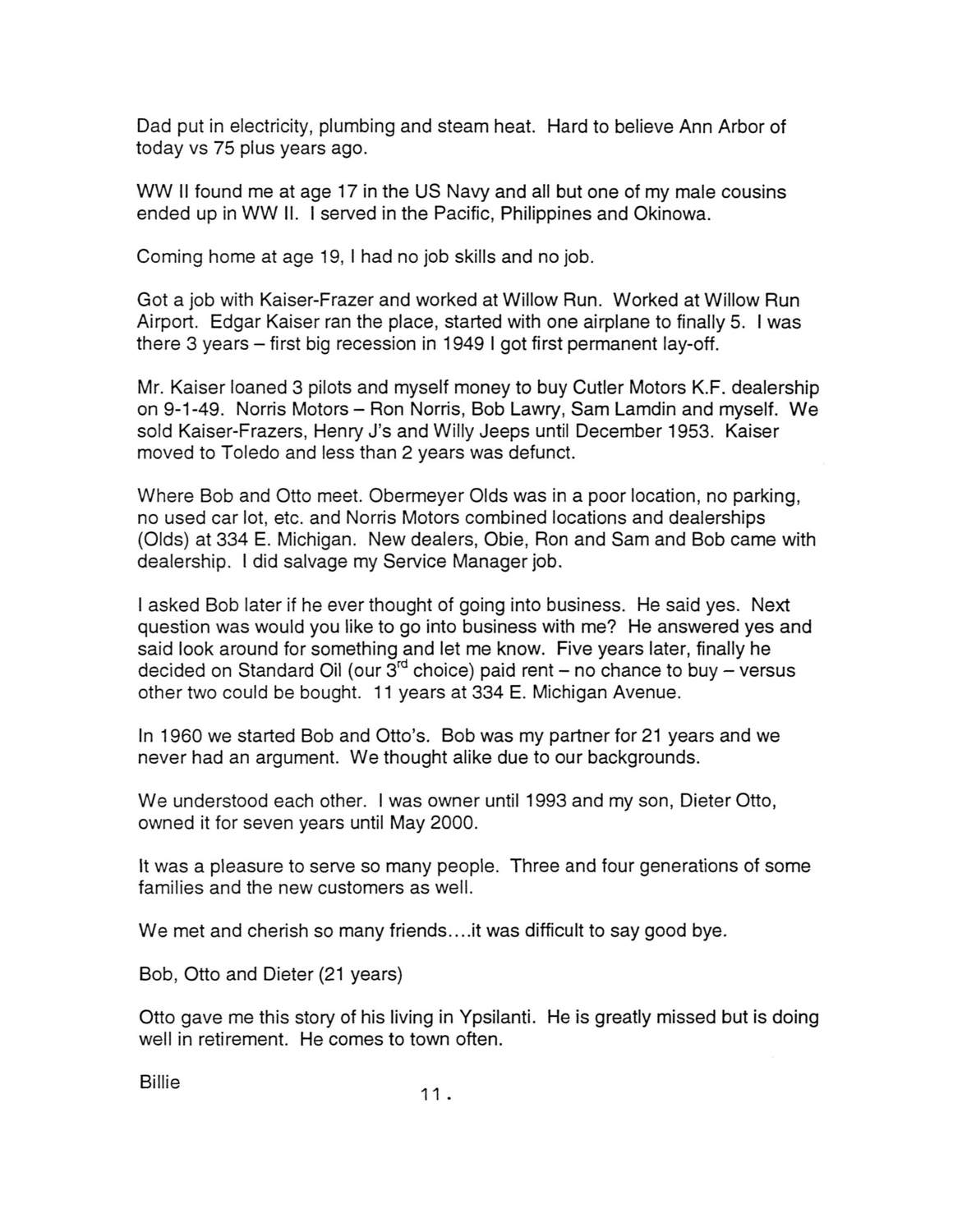 We selected the best applicant available continue to conduct the business you're use to.

There will be some changes naturally, with improvements of course, for better service.

Hopefully the goals set forty years ago have been met. Quality and friendly service to all, help with understanding for your car needs and a place you like to come to also.

We've had the pleasure of servicing three and four generations of the same families, and many one on one.

Dieter (seven years as owner), after twenty one years is now looking forward to a career change and up grading his education

Otto after; two years in the Navy (diesel mechanic), three years as an airplane mechanic, eleven years in a car dealership working as a mechanic, shop foreman and service manager, and forty years at Bob & Otto's-retired seven years ago-now he will retirel

When Bob retired he said, “I'm going to miss the people most.” As the Ottos' close out their careers (Dieter and Harlan), we will miss all, our customers and our new friends and co-workers that have been invaluable over the years.

The new owner will offer jobs to our employees-you will see familiar friends.

Again we thank you for the privilege to be of service to all of you! Sincerely,

Your car will receive conscientious care and service from the well-trained mechanics at Bob & Otto's Standard Service. Forty-eight years of mechanical experience and 25 years in car dealership have established this firm as an expert in its field. Turn to this station for front-end alignment, wheel balancing and trueing, brake repairing, and other services that will keep your car in top-running condition. The Problem Solvers.

Robert M. Robinson was born January 1,1920, in Saginaw Michigan. In WWII Bob was in tank corp…Europe liberation of Southern Germany.

Came to U of M under GI Bill. Lack of math skills and attended only 2 years.

Went to work in Nash car dealership in Ann Arbor and then for Lee Havalin on West Cross Street in Ypsilanti where High Scope first started. Was sold to M.D. Obermeyer “Obie” who was later Mayor of Ypsilanti who took on Oldsmobile franchise. Olds/Chevy dealerships were dual units at this time. Olds with new Rocket 88 engines wanted to increase sales so they split them up.

Doran Chevrolet then was Chevys only.

Mr. Doran was a personal friend of Louis Chevrolet.

Allen Chapel Mercury dealership in building where Ypsilanti Press on Michigan Avenue was, was then sold to Mr. Sesi, a personal friend of Henry Ford. Sesi Lincoln Mercury reached a status of “10 top dealers in the USA”.

This was a car town.

Michigan and Water Streets-Schaeffer Chrysler/Plymouth to Chapel Line. then Joe Sesi bought them. Across the street was Joe Thompson Dodge-Plymouth in building with Paul Chapman Sr.-Cadillac/Pontiac. Then across the street was DeSoto-Plymouth next to them was Chevrolet. Believe it was Vincent Chevrolet Co.

E. G. Weidman Ford on Pearl Street where parking lot is behind current Bus Station. The Weidman Brothers each had Ford dealerships in Saline, Ypsilanti, and Plymouth, Michigan. Gene Butman obtained dealership in about 1956. Only 2 Ford dealers, Weidman and Butman, in Ypsilanti.

Alex Longnecker Buick was on Michigan Avenue and Prospect.

Dad put in electricity, plumbing and steam heat. Hard to believe Ann Arbor of today vs 75 plus years ago.

WW II found me at age 17 in the US Navy and all but one of my male cousins ended up in WW II. I served in the Pacific, Philippines and Okinowa.

Coming home at age 19, I had no job skills and no job.

Got a job with Kaiser-Frazer and worked at Willow Run. Worked at Willow Run Airport. Edgar Kaiser ran the place, started with one airplane to finally 5. I was there 3 years-first big recession in 1949 I got first permanent lay-off.

Mr. Kaiser loaned 3 pilots and myself money to buy Cutler Motors K.F. dealership on 9-1-49. Norris Motors-Ron Norris, Bob Lawry, Sam Lamdin and myself. We sold Kaiser-Frazers, Henry J's and Willy Jeeps until December 1953. Kaiser moved to Toledo and less than 2 years was defunct.

Where Bob and Otto meet. Obermeyer Olds was in a poor location, no parking, no used car lot, etc. and Norris Motors combined locations and dealerships (Olds) at 334 E. Michigan. New dealers, Obie, Ron and Sam and Bob came with dealership. I did salvage my Service Manager job.

I asked Bob later if he ever thought of going into business. He said yes. Next question was would you like to go into business with me? He answered yes and said look around for something and let me know. Five years later, finally he decided on Standard Oil (our 3rd choice) paid rent-no chance to buy-versus other two could be bought. 11 years at 334 E. Michigan Avenue.

In 1960 we started Bob and Otto's. Bob was my partner for 21 years and we never had an argument. We thought alike due to our backgrounds.

We understood each other. I was owner until 1993 and my son, Dieter Otto, owned it for seven years until May 2000.

It was a pleasure to serve so many people. Three and four generations of some families and the new customers as well. We met and cherish so many friends….it was difficult to say good bye.

Otto gave me this story of his living in Ypsilanti. He is greatly missed but is doing well in retirement. He comes to town often.