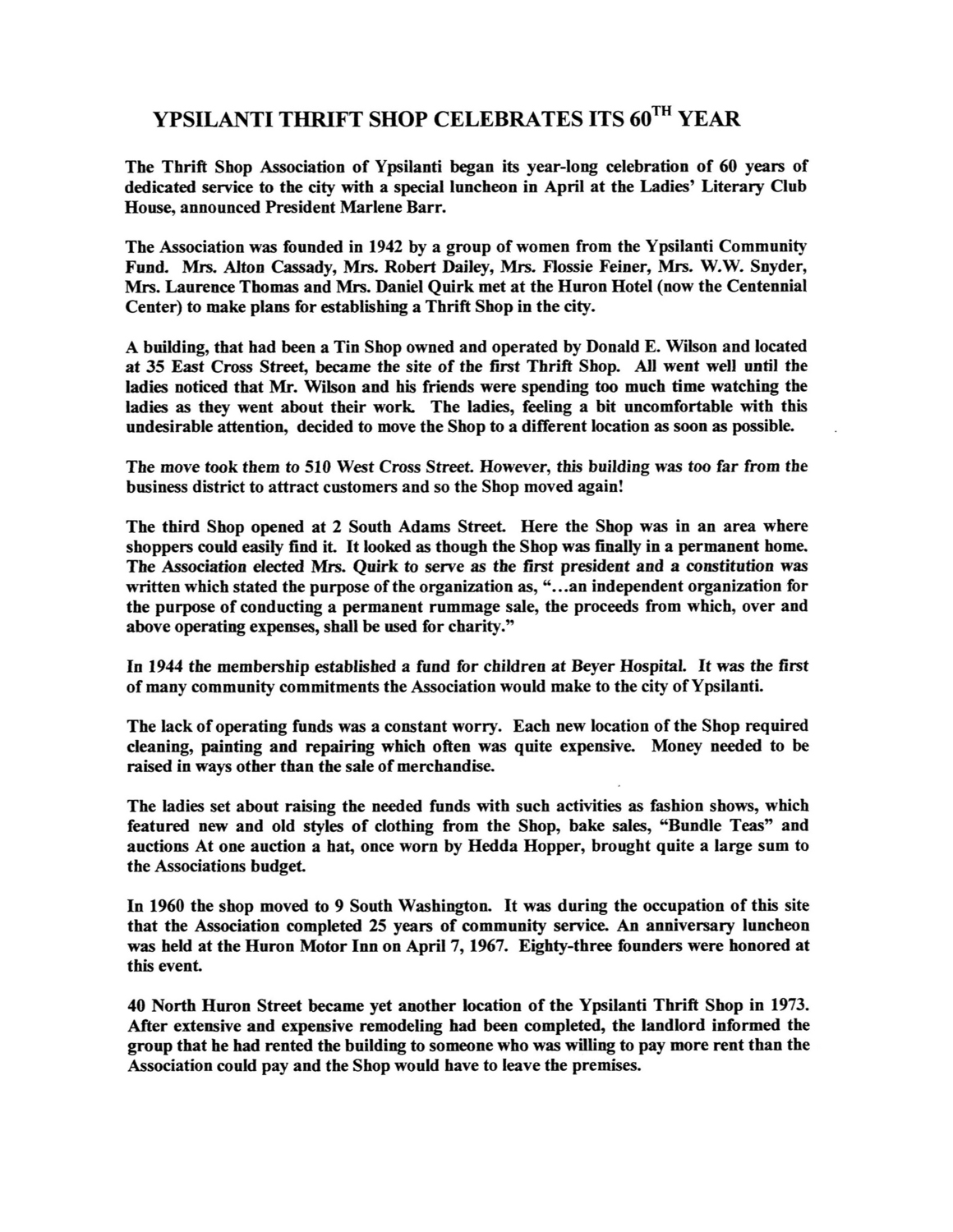 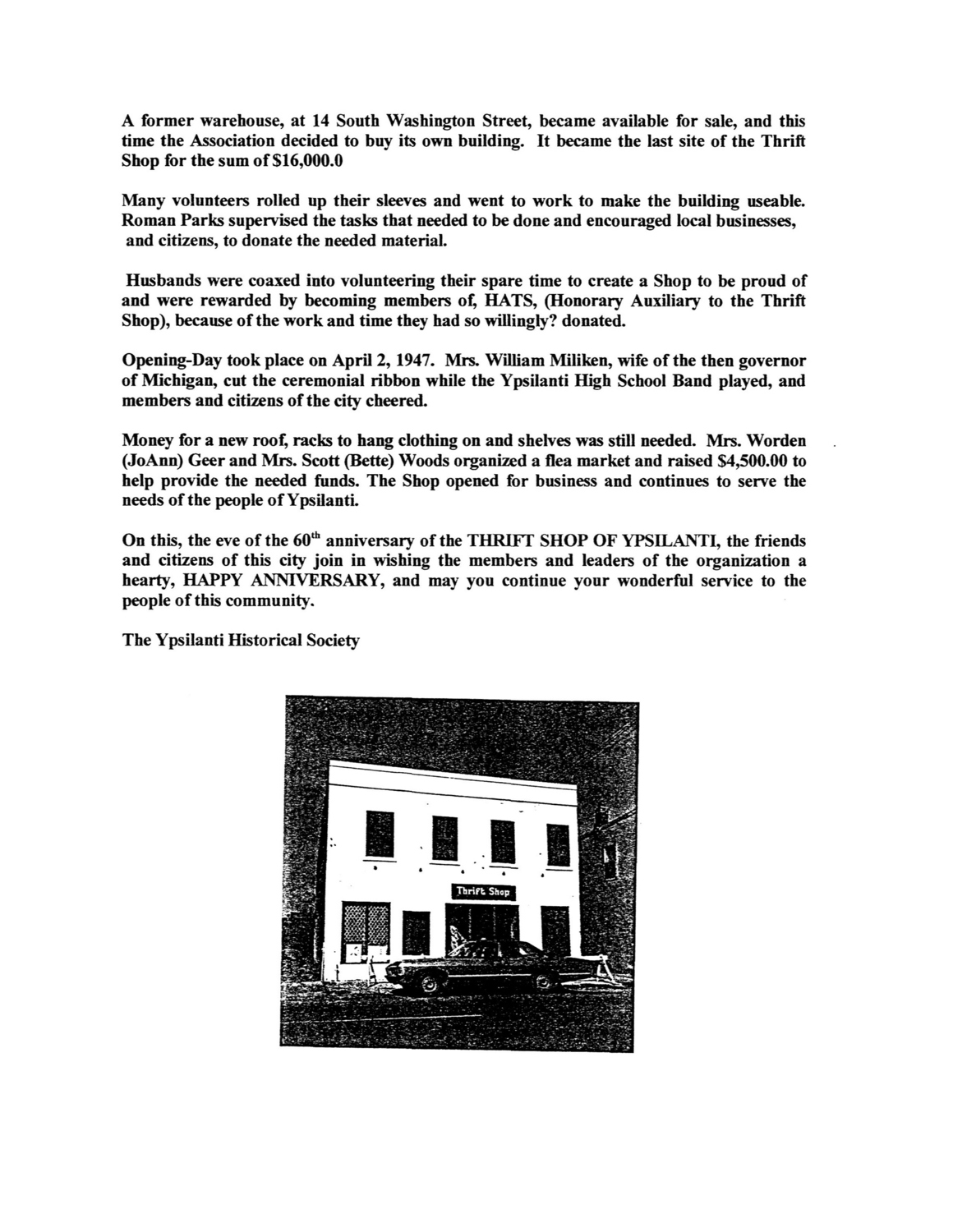 The Thrift Shop Association of Ypsilanti began its year-long celebration of 60 years of dedicated service to the city with a special luncheon in April at the Ladies' Literary Club House, announced President Marlene Barr.

The Association was founded in 1942 by a group of women from the Ypsilanti Community Fund. Mrs. Alton Cassady, Mrs. Robert Dailey, Mrs. Flossie Feiner, Mrs. W.W. Snyder, Mrs. Laurence Thomas and Mrs. Daniel Quirk met at the Huron Hotel (now the Centennial Center) to make plans for establishing a Thrift Shop in the city.

A building, that had been a Tin Shop owned and operated by Donald E. Wilson and located at 35 East Cross Street, became the site of the first Thrift Shop. All went well until the ladies noticed that Mr. Wilson and his friends were spending too much time watching the ladies as they went about their work. The ladies, feeling a bit uncomfortable with this undesirable attention, decided to move the Shop to a different location as soon as possible.

The move took them to 510 West Cross Street. However, this building was too far from the business district to attract customers and so the Shop moved again!

The third Shop opened at 2 South Adams Street. Here the Shop was in an area where shoppers could easily find it. It looked as though the Shop was finally in a permanent home. The Association elected Mrs. Quirk to serve as the first president and a constitution was written which stated the purpose of the organization as,”…an independent organization for the purpose of conducting a permanent rummage sale, the proceeds from which, over and above operating expenses, shall be used for charity.”

In 1944 the membership established a fund for children at Beyer Hospital. It was the first of many community commitments the Association would make to the city of Ypsilanti.

The lack of operating funds was a constant worry. Each new location of the Shop required cleaning, painting and repairing which often was quite expensive. Money needed to be raised in ways other than the sale of merchandise.

The ladies set about raising the needed funds with such activities as fashion shows, which featured new and old styles of clothing from the Shop, bake sales, “Bundle Teas” and auctions At one auction a hat, once worn by Hedda Hopper, brought quite a large sum to the Associations budget.

In 1960 the shop moved to 9 South Washington. It was during the occupation of this site that the Association completed 25 years of community service. An anniversary luncheon was held at the Huron Motor Inn on April 7, 1967. Eighty-three founders were honored at this event.

40 North Huron Street became yet another location of the Ypsilanti Thrift Shop in 1973. After extensive and expensive remodeling had been completed, the landlord informed the group that he had rented the building to someone who was willing to pay more rent than the Association could pay and the Shop would have to leave the premises.

A former warehouse, at 14 South Washington Street, became available for sale, and this time the Association decided to buy its own building. It became the last site of the Thrift Shop for the sum of &dollar;16,000.0

Many volunteers rolled up their sleeves and went to work to make the building usable. Roman Parks supervised the tasks that needed to be done and encouraged local businesses, and citizens, to donate the needed material.

Husbands were coaxed into volunteering their spare time to create a Shop to be proud of and were rewarded by becoming members of, HATS, (Honorary Auxiliary to the Thrift Shop), because of the work and time they had so willingly? donated.

Opening-Day took place on April 2, 1947. Mrs. William Miliken, wife of the then governor of Michigan, cut the ceremonial ribbon while the Ypsilanti High School Band played, and members and citizens of the city cheered.

Money for a new roof, racks to hang clothing on and shelves was still needed. Mrs. Worden (JoAnn) Geer and Mrs. Scott (Bette) Woods organized a flea market and raised &dollar;4,500.00 to help provide the needed funds. The Shop opened for business and continues to serve the needs of the people of Ypsilanti.

On this, the eve of the 60th anniversary of the THRIFT SHOP OF YPSILANTI, the friends and citizens of this city join in wishing the members and leaders of the organization a hearty, HAPPY ANNIVERSARY, and may you continue your wonderful service to the people of this community.