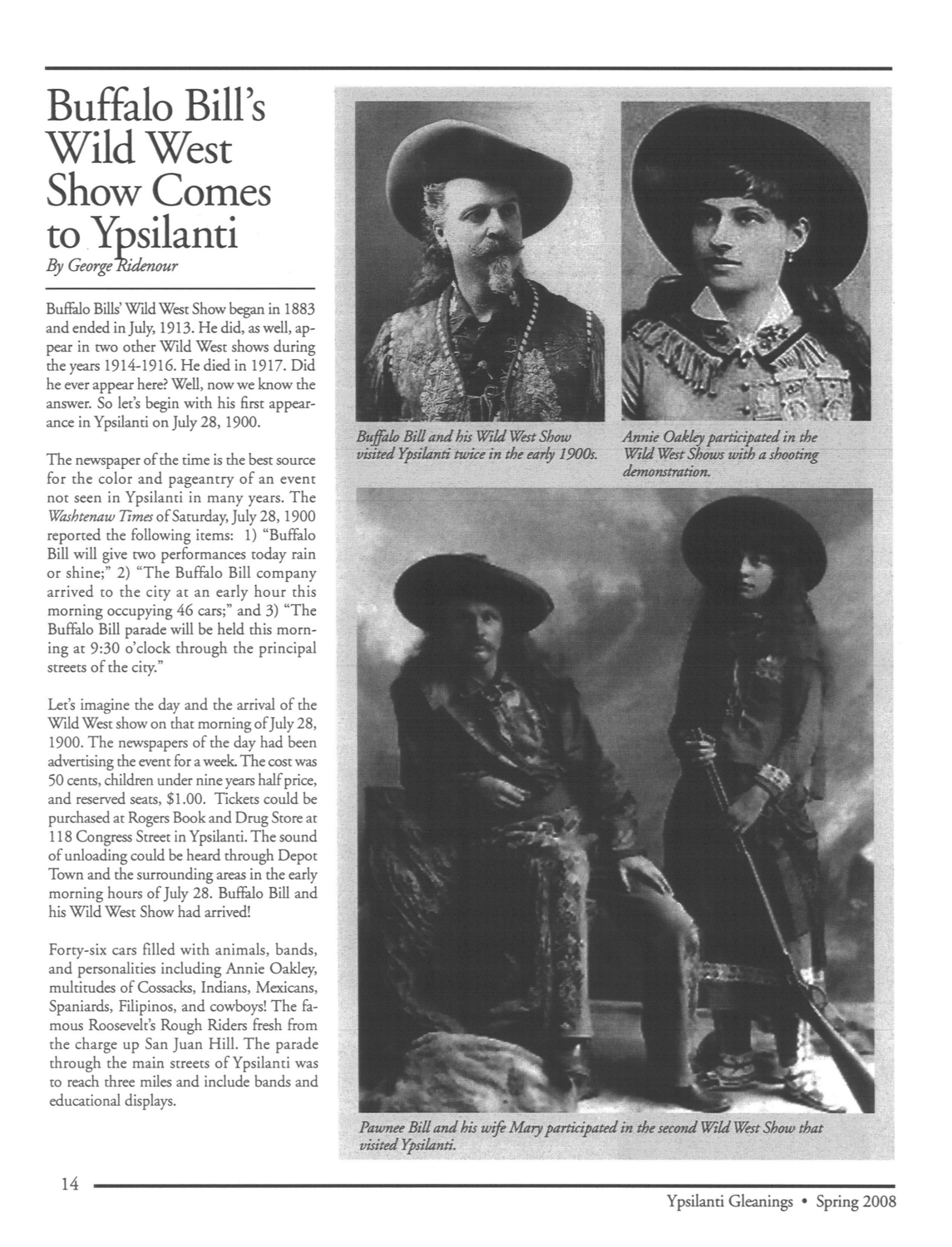 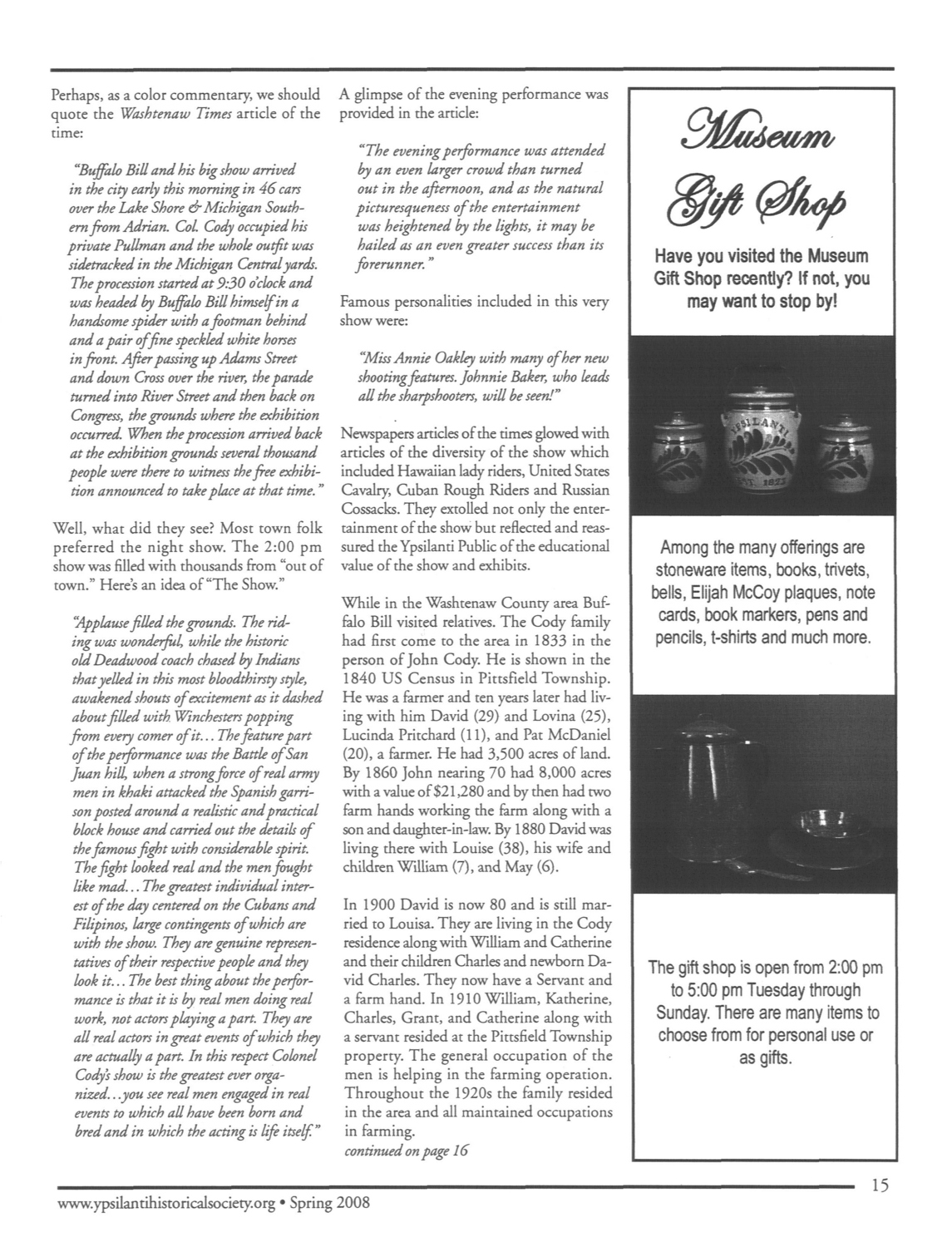 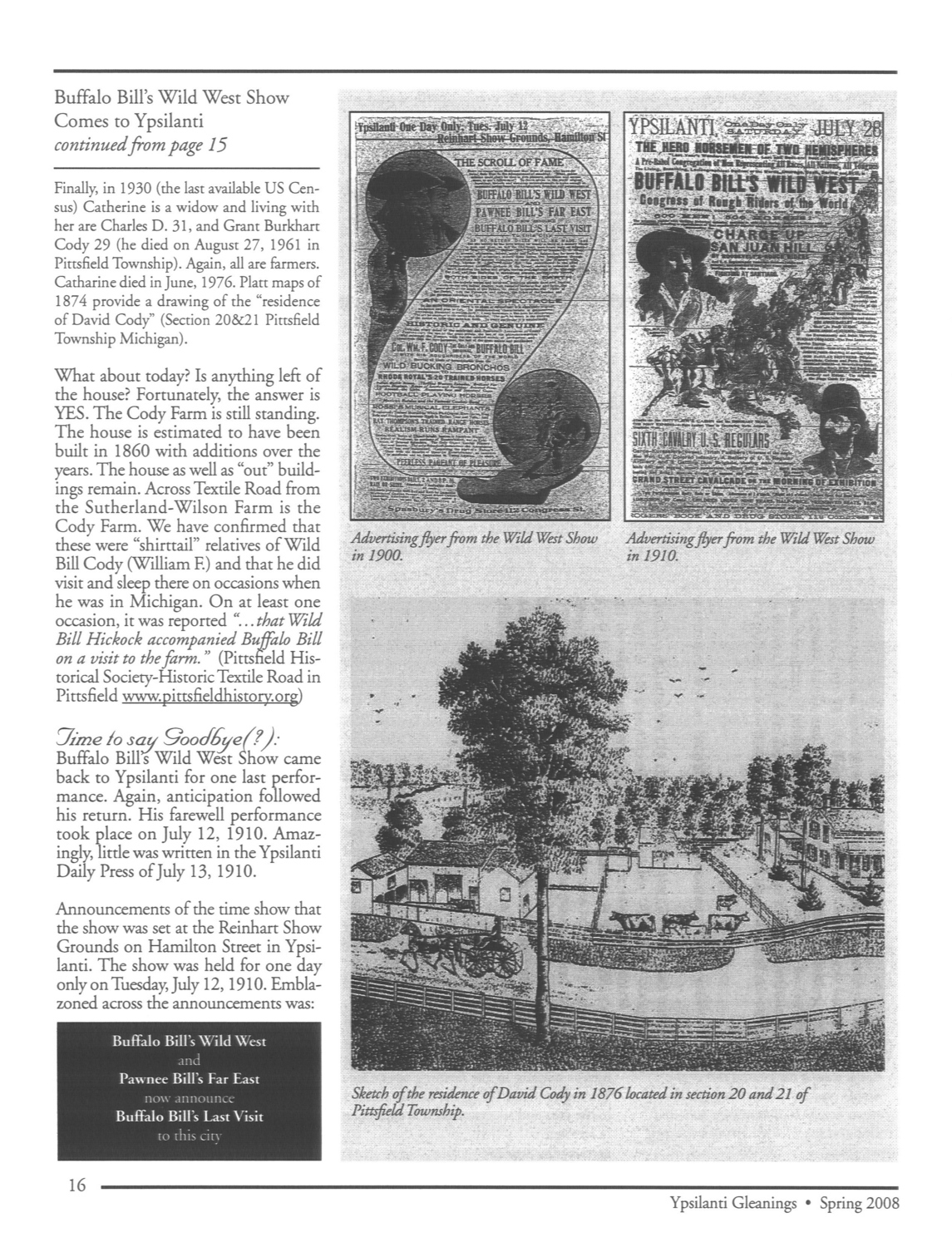 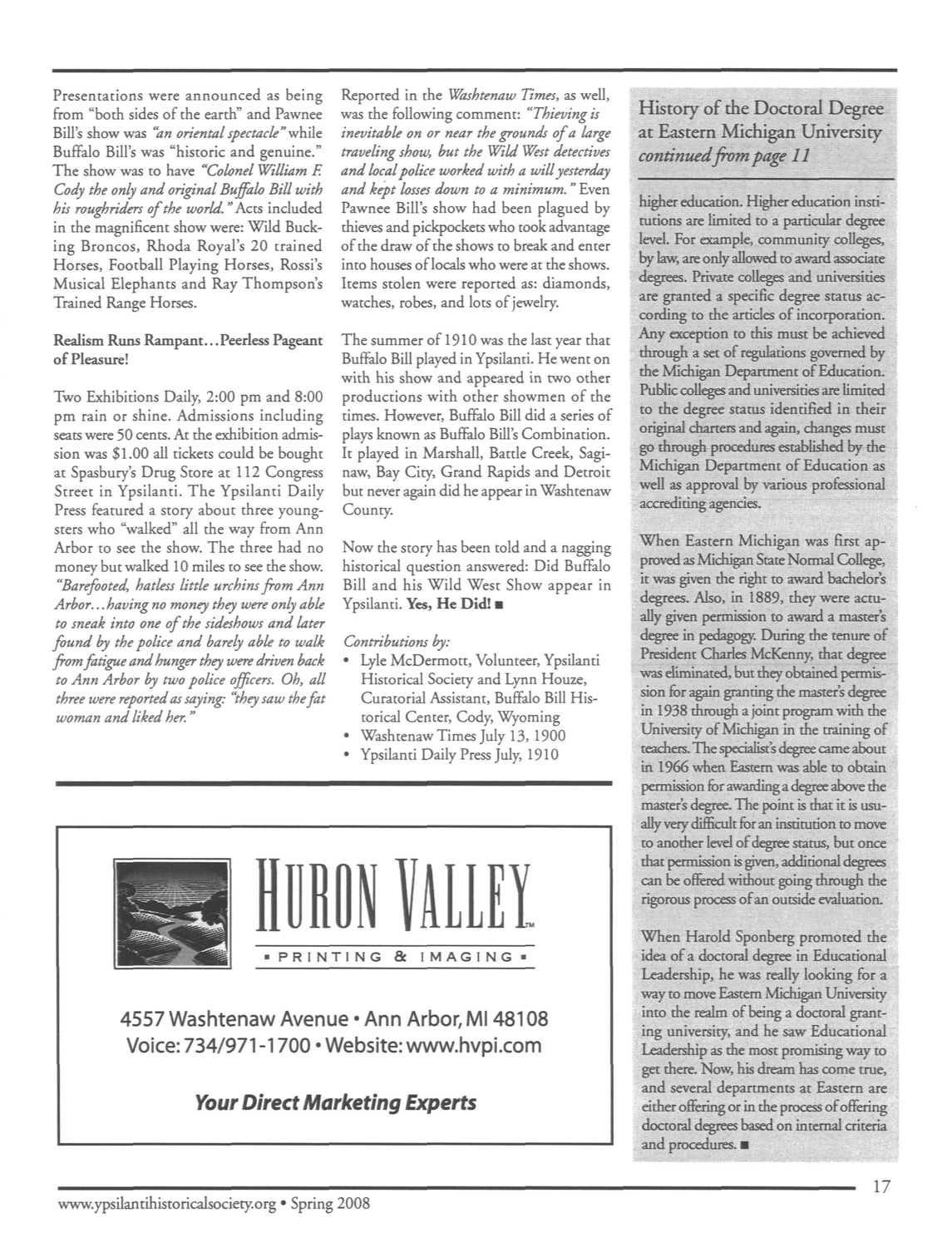 The newspaper of the time is the best source for the color and pageantry of an event not seen in Ypsilanti in many years. The Washtenaw Times of Saturday, July 28, 1900 reported the following items: 1) “Buffalo Bill will give two performances today rain or shine;” 2) “The Buffalo Bill company arrived to the city at an early hour this morning occupying 46 cars;” and 3) “The Buffalo Bill parade will be held this morning at 9:30 o'clock through the principal streets of the city.”

Let's imagine the day and the arrival of the Wild West show on that morning of July 28, 1900. The newspapers of the day had been advertising the event for a week. The cost was 50 cents, children under nine years half price, and reserved seats, &dollar;1.00. Tickets could be purchased at Rogers Book and Drug Store at 118 Congress Street in Ypsilanti. The sound of unloading could be heard through Depot Town and the surrounding areas in the early morning hours of July 28. Buffalo Bill and his Wild West Show had arrived!

Forty-six cars filled with animals, bands, and personalities including Annie Oakley, multitudes of Cossacks, Indians, Mexicans, Spaniards, Filipinos, and cowboys! The famous Roosevelt's Rough Riders fresh from the charge up San Juan Hill. The parade through the main streets of Ypsilanti was to reach three miles and include bands and educational displays.

Annie Oakley participated in the Wild West Shows with a shooting demonstration.

Pawnee Bill and his wife Mary participated in the second Wild West Show that visited Ypsilanti.

Perhaps, as a color commentary, we should quote the Washtenaw Times article of the time:

“Buffalo Bill and his big show arrived in the city early this morning in 46 cars over the Lake Shore & Michigan Southern from Adrian. Col. Cody occupied his private Pullman and the whole outfit was sidetracked in the Michigan Central yards. The procession started at 9:30 o'clock and was headed by Buffalo Bill himself in a handsome spider with a footman behind and a pair of fine speckled white horses in front. After passing up Adams Street and down Cross over the river, the parade turned into River Street and then back on Congress, the grounds where the exhibition occurred. When the procession arrived back at the exhibition grounds several thousand people were there to witness the free exhibition announced to take place at that time.”

Well, what did they see? Most town folk preferred the night show. The 2:00 pm show was filled with thousands from “out of town.” Here's an idea of “The Show.”

“Applause filled the grounds. The riding was wonderful, while the historic old Deadwood coach chased by Indians that yelled in this most bloodthirsty style, awakened shouts of excitement as it dashed about filled with Winchesters popping from every comer of it… The feature part of the performance was the Battle of San Juan hill, when a strong force of real army men in khaki attacked the Spanish garrison posted around a realistic and practical block house and carried out the details of the famous fight with considerable spirit. The fight looked real and the men fought like mad… The greatest individual interest of the day centered on the Cubans and Filipinos, large contingents of which are with the show. They are genuine representatives of their respective people and they look it… The best thing about the performance is that it is by real men doing real work, not actors playing a part. They are all real actors in great events of which they are actually a part. In this respect Colonel Cody's show is the greatest ever organized… you see real men engaged in real events to which all have been born and bred and in which the acting is life itself.”

A glimpse of the evening performance was provided in the article:

“The evening performance was attended by an even larger crowd than turned out in the afternoon, and as the natural picturesqueness of the entertainment was heightened by the lights, it may be hailed as an even greater success than its forerunner.”

Famous personalities included in this very show were:

“Miss Annie Oakley with many of her new shooting features. Johnnie Baker, who leads all the sharpshooters, will be seen!”

Newspapers articles of the times glowed with articles of the diversity of the show which included Hawaiian lady riders, United States Cavalry, Cuban Rough Riders and Russian Cossacks. They extolled not only the entertainment of the show but reflected and reassured the Ypsilanti Public of the educational value of the show and exhibits.

In 1900 David is now 80 and is still married to Louisa. They are living in the Cody residence along with William and Catherine and their children Charles and newborn David Charles. They now have a Servant and a farm hand. In 1910 William, Katherine, Charles, Grant, and Catherine along with a servant resided at the Pittsfield Township property. The general occupation of the men is helping in the farming operation. Throughout the 1920s the family resided in the area and all maintained occupations in farming.

Finally, in 1930 (the last available US Census) Catherine is a widow and living with her are Charles D. 31, and Grant Burkhart Cody 29 (he died on August 27, 1961 in Pittsfield Township). Again, all are farmers. Catharine died in June, 1976. Platt maps of 1874 provide a drawing of the “residence of David Cody” (Section 20 & 21 Pittsfield Township Michigan).

What about today? Is anything left of the house? Fortunately, the answer is YES. The Cody Farm is still standing. The house is estimated to have been built in 1860 with additions over the years. The house as well as “out” buildings remain. Across Textile Road from the Sutherland-Wilson Farm is the Cody Farm. We have confirmed that these were “shirttail” relatives of Wild Bill Cody (William F.) and that he did visit and sleep there on occasions when he was in Michigan. On at least one occasion, it was reported “… that Wild Bill Hickock accompanied Buffalo Bill on a visit to the farm.” (Pittsfield Historical Society-Historic Textile Road in Pittsfield www.pittsfieldhistory.org)

Buffalo Bill's Wild West Show came back to Ypsilanti for one last performance. Again, anticipation followed his return. His farewell performance took place on July 12, 1910. Amazingly, little was written in the Ypsilanti Daily Press of July 13, 1910.

Announcements of the time show that the show was set at the Reinhart Show Grounds on Hamilton Street in Ypsilanti. The show was held for one day only on Tuesday, July 12, 1910. Emblazoned across the announcements was:

Advertising flyer from the Wild West Show in 1900.

Advertising flyer from the Wild West Show in 1910.

Sketch of the residence of David Cody in 1876 located in section 20 and 21 of Pittsfield Township.

Presentations were announced as being from “both sides of the earth” and Pawnee Bill's show was “an oriental spectacle” while Buffalo Bill's was “historic and genuine.” The show was to have “Colonel William F. Cody the only and original Buffalo Bill with his roughriders of the world.” Acts included in the magnificent show were: Wild Bucking Broncos, Rhoda Royal's 20 trained Horses, Football Playing Horses, Rossi's Musical Elephants and Ray Thompson's Trained Range Horses.

Two Exhibitions Daily, 2:00 pm and 8:00 pm rain or shine. Admissions including seats were 50 cents. At the exhibition admission was &dollar;1.00 all tickets could be bought at Spasbury's Drug Store at 112 Congress Street in Ypsilanti. The Ypsilanti Daily Press featured a story about three youngsters who “walked” all the way from Ann Arbor to see the show. The three had no money but walked 10 miles to see the show.

“Barefooted, hatless little urchins from Ann Arbor…having no money they were only able to sneak into one of the sideshows and later found by the police and barely able to walk from fatigue and hunger they were driven back to Ann Arbor by two police officers. Oh, all three were reported as saying: “they saw the fat woman and liked her.”

Reported in the Washtenaw Times, as well, was the following comment: “Thieving is inevitable on or near the grounds of a large traveling show, but the Wild West detectives and local police worked with a will yesterday and kept losses down to a minimum.” Even Pawnee Bill's show had been plagued by thieves and pickpockets who took advantage of the draw of the shows to break and enter into houses of locals who were at the shows. Items stolen were reported as: diamonds, watches, robes, and lots of jewelry.

The summer of 1910 was the last year that Buffalo Bill played in Ypsilanti. He went on with his show and appeared in two other productions with other showmen of the times. However, Buffalo Bill did a series of plays known as Buffalo Bill's Combination. It played in Marshall, Battle Creek, Saginaw, Bay City, Grand Rapids and Detroit but never again did he appear in Washtenaw County.

Now the story has been told and a nagging historical question answered: Did Buffalo Bill and his Wild West Show appear in Ypsilanti. Yes, He Did!