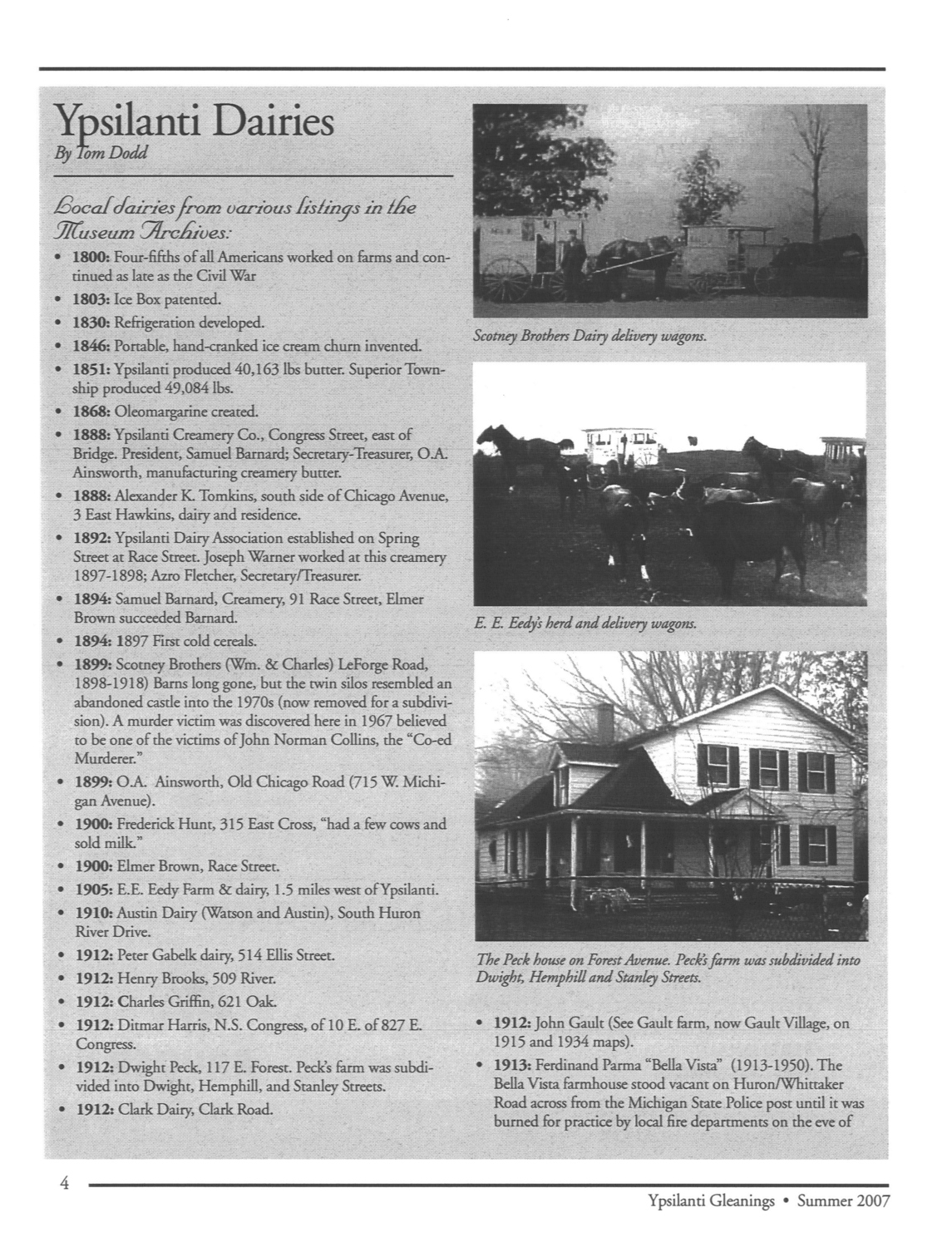 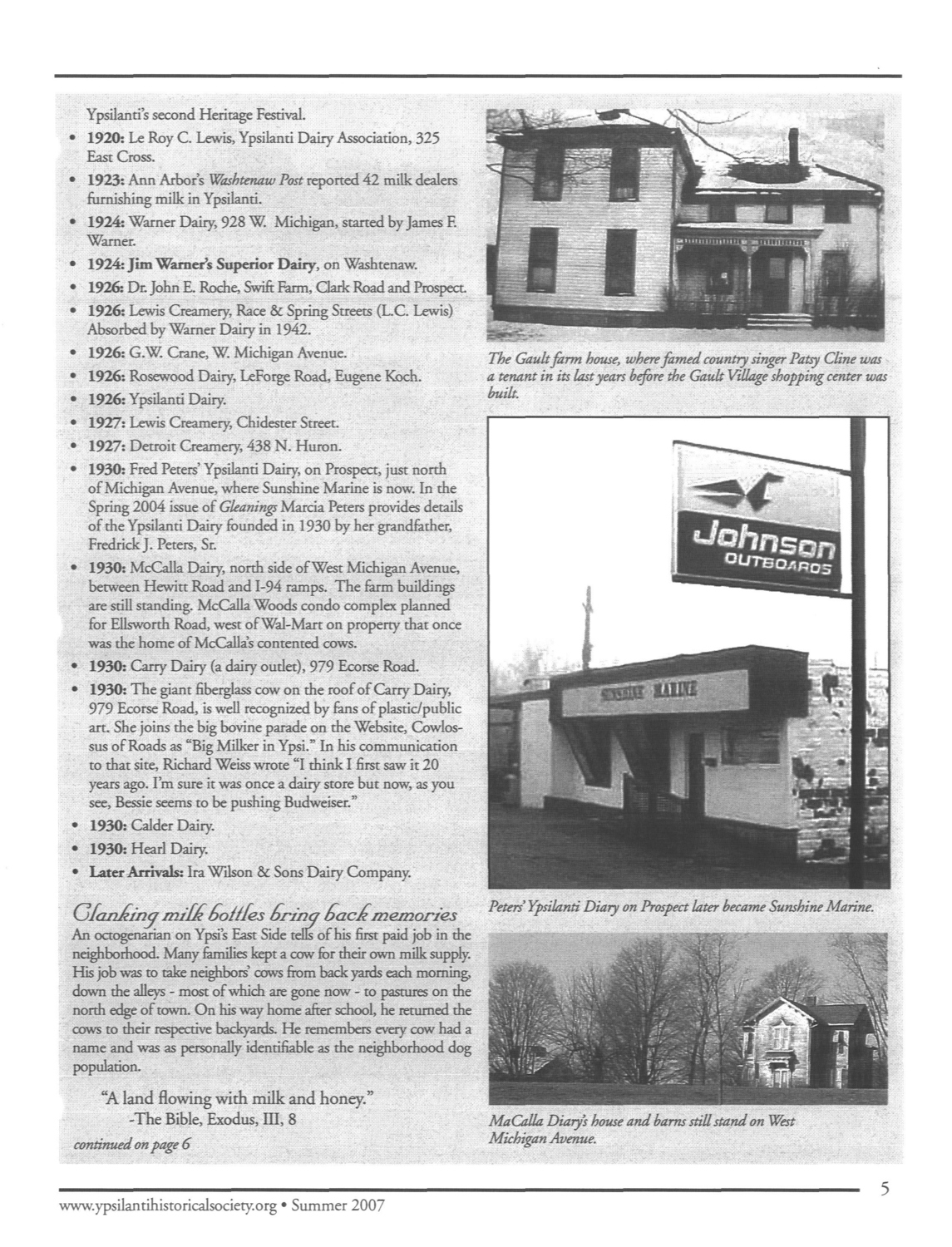 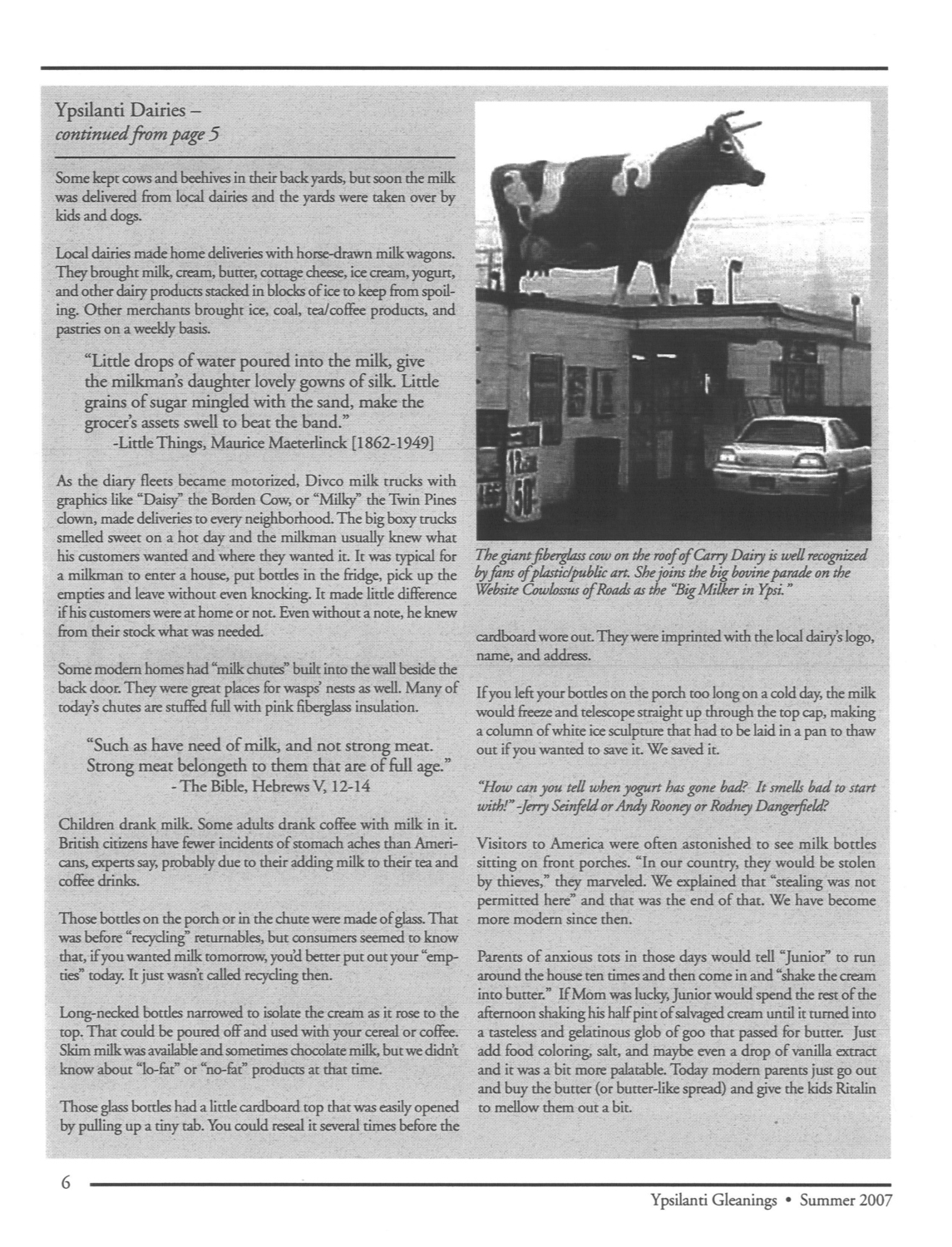 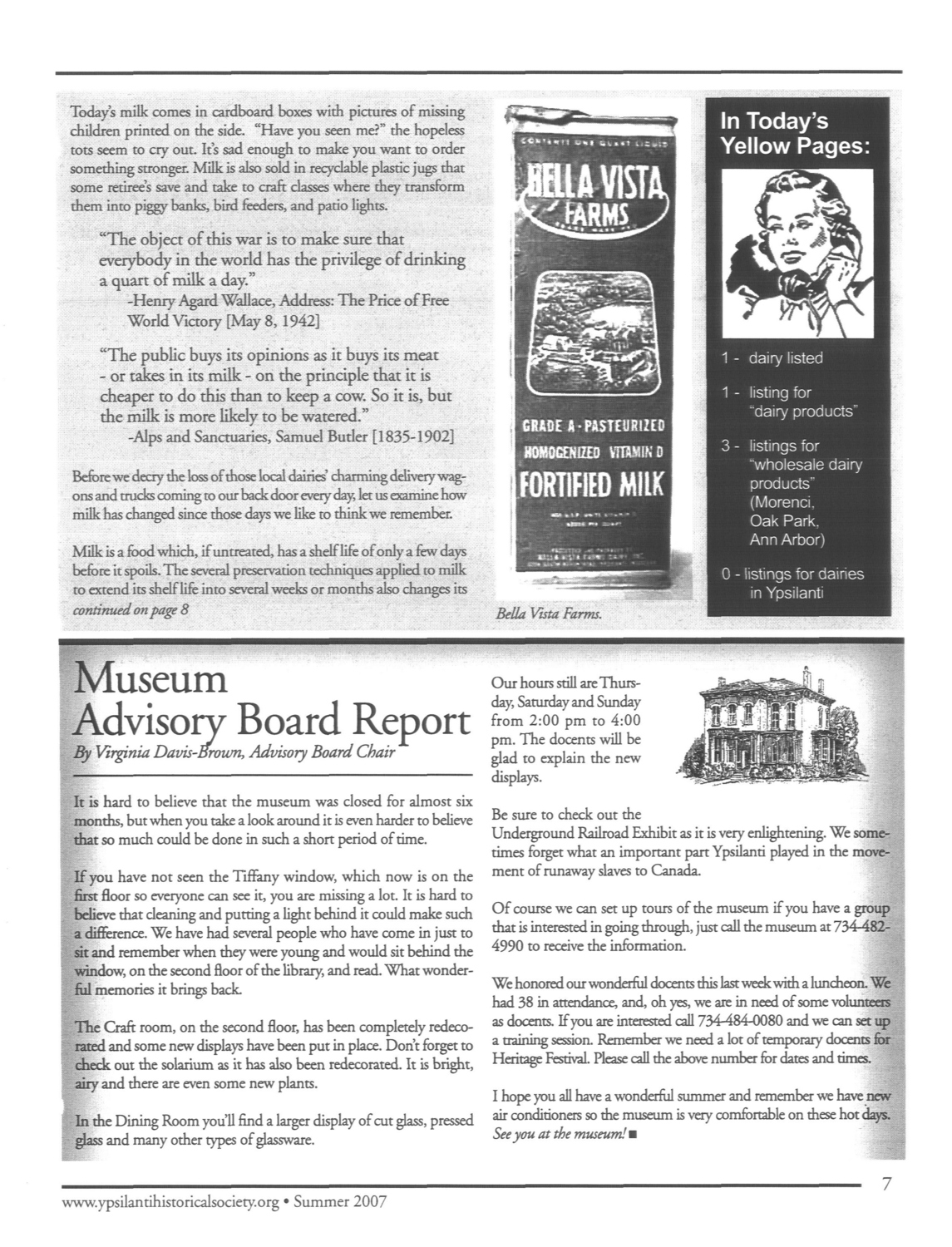 Local dairies from various listings in the Museum Archives:


The Peck house on Forest Avenue. Peck's farm was subdivided into Dwight, Hemphill and Stanley Streets.

An octogenarian on Ypsi's East Side tells of his first paid job in the neighborhood. Many families kept a cow for their own milk supply. His job was to take neighbors' cows from back yards each morning, down the alleys-most of which are gone now-to pastures on the north edge of town. On his way home after school, he returned the cows to their respective backyards. He remembers every cow had a name and was as personally identifiable as the neighborhood dog population.

The Gault farm house, where famed country singer Patsy Cline was a tenant in its last years before the Gault Village shopping center was built.


“A land flowing with milk and honey.”-The Bible, Exodus, III, 8

Some kept cows and beehives in their back yards, but soon the milk was delivered from local dairies and the yards were taken over by kids and dogs.

“Little drops of water poured into the milk, give the milkman's daughter lovely gowns of silk. Little grains of sugar mingled with the sand, make the grocer's assets swell to beat the band.”-Little Things, Maurice Maeterlinck [1862–1949]

As the diary fleets became motorized, Divco milk trucks with graphics like “Daisy” the Borden Cow, or “Milky” the Twin Pines clown, made deliveries to every neighborhood. The big boxy trucks smelled sweet on a hot day and the milkman usually knew what his customers wanted and where they wanted it. It was typical for a milkman to enter a house, put bottles in the fridge, pick up the empties and leave without even knocking. It made little difference if his customers were at home or not. Even without a note, he knew from their stock what was needed.

Some modern homes had “milk chutes” built into the wall beside the back door. They were great places for wasps' nests as well. Many of today's chutes are stuffed full with pink fiberglass insulation.

“Such as have need of milk, and not strong meat. Strong meat belongeth to them that are of full age.”-The Bible, Hebrews V, 12–14

Children drank milk. Some adults drank coffee with milk in it. British citizens have fewer incidents of stomach aches than Americans, experts say, probably due to their adding milk to their tea and coffee drinks.

Those bottles on the porch or in the chute were made of glass. That was before “recycling” returnables, but consumers seemed to know that, if you wanted milk tomorrow, you'd better put out your “empties” today. It just wasn't called recycling then.

Long-necked bottles narrowed to isolate the cream as it rose to the top. That could be poured off and used with your cereal or coffee. Skim milk was available and sometimes chocolate milk, but we didn't know about “lo-fat” or “no-fat” products at that time.

Those glass bottles had a little cardboard top that was easily opened by pulling up a tiny tab. You could reseal it several times before the cardboard wore out. They were imprinted with the local dairy's logo, name, and address.

The giant fiberglass cow on the roof of Carry Dairy is well recognized by fans of plastic/public art. She joins the big bovine parade on the Website Cowlossus of Roads as the “Big Milker in Ypsi.”


If you left your bottles on the porch too long on a cold day, the milk would freeze and telescope straight up through the top cap, making a column of white ice sculpture that had to be laid in a pan to thaw out if you wanted to save it. We saved it.

“How can you tell when yogurt has gone bad? It smells bad to start with!”-Jerry Seinfeld or Andy Rooney or Rodney Dangerfield?

Visitors to America were often astonished to see milk bottles sitting on front porches. “In our country, they would be stolen by thieves,” they marveled. We explained that “stealing was not permitted here” and that was the end of that. We have become more modern since then.

Parents of anxious tots in those days would tell “Junior” to run around the house ten times and then come in and “shake the cream into butter.” If Mom was lucky, Junior would spend the rest of the afternoon shaking his half pint of salvaged cream until it turned into a tasteless and gelatinous glob of goo that passed for butter. Just add food coloring, salt, and maybe even a drop of vanilla extract and it was a bit more palatable. Today modern parents just go out and buy the butter (or butter-like spread) and give the kids Ritalin to mellow them out a bit.

Today's milk comes in cardboard boxes with pictures of missing children printed on the side. “Have you seen me?” the hopeless tots seem to cry out. It's sad enough to make you want to order something stronger. Milk is also sold in recyclable plastic jugs that some retiree's save and take to craft classes where they transform them into piggy banks, bird feeders, and patio lights.

“The object of this war is to make sure that everybody in the world has the privilege of drinking a quart of milk a day.”-Henry Agard Wallace, Address: The Price of Free World Victory [May 8, 1942]

“The public buys its opinions as it buys its meat-or takes in its milk-on the principle that it is cheaper to do this than to keep a cow. So it is, but the milk is more likely to be watered.”-Alps and Sanctuaries, Samuel Butler [1835–1902]

Before we decry the loss of those local dairies' charming delivery wagons and trucks coming to our back door every day, let us examine how milk has changed since those days we like to think we remember.


Milk is a food which, if untreated, has a shelf life of only a few days before it spoils. The several preservation techniques applied to milk to extend its shelf life into several weeks or months also changes its qualities by developing different flavors and textures. To preserve milk it is necessary to destroy or inhibit the action of enzymes and contaminating bacteria. Milk is a low-acid food which contains all of the nutrients required for bacteria to grow. Milk is a potential cause of food poisoning if not adequately processed. In all dairy processing it is essential that full and proper hygiene precautions be taken to ensure the safety of the product.

The four main methods of preservation for small-scale operation:

•Cooling — to extend the shelf life of fresh milk by a day or two
•Heating-pasteurization, sterilization or concentration) to destroy enzymes and micro-organisms
•Acidification —to inhibit spoilage or food poisoning bacteria from growing and also change the physical characteristics of milk.
•Separation — of the milk components


It is not possible to take out nearly all bacteria and taste and offer a product that will last into next year and still taste like what we think of as milk.