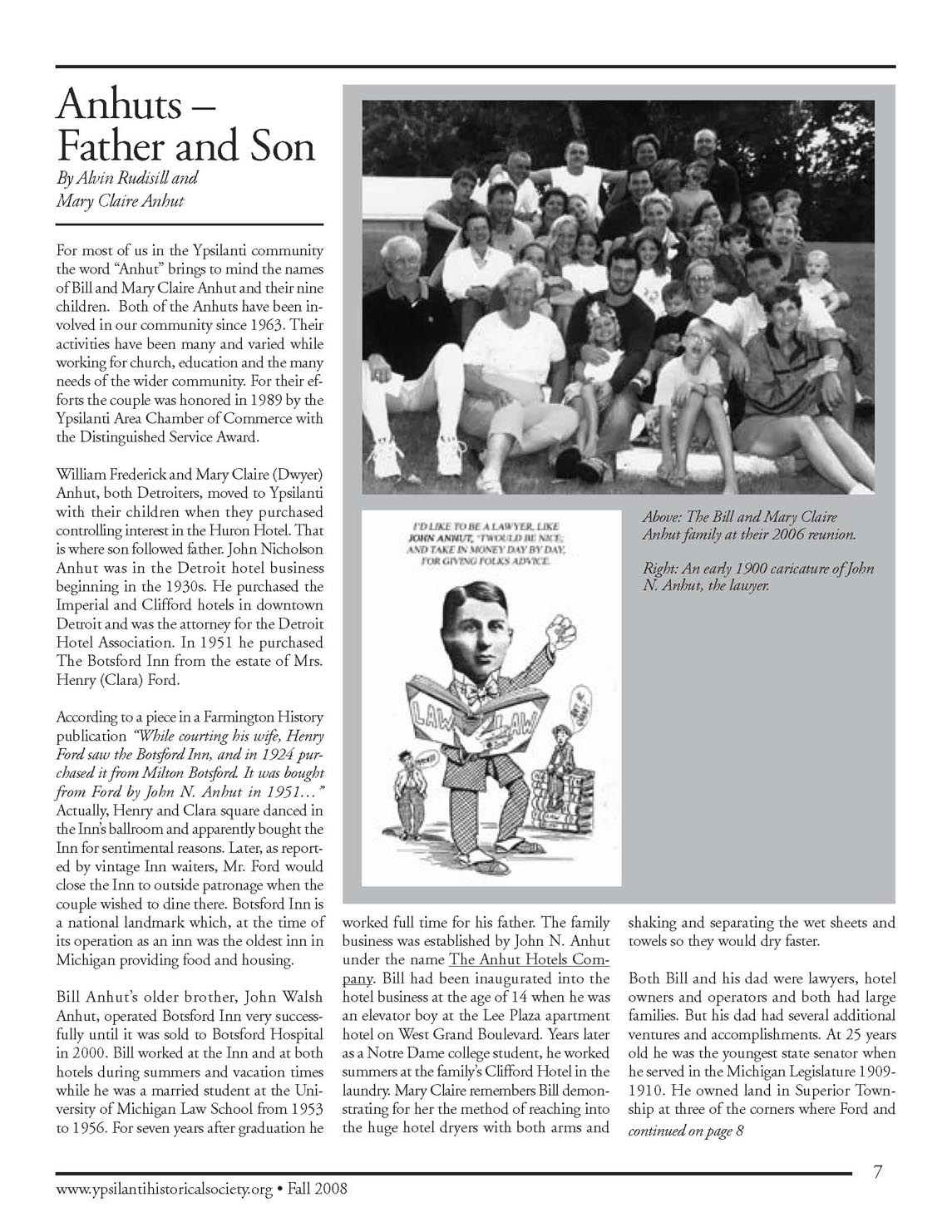 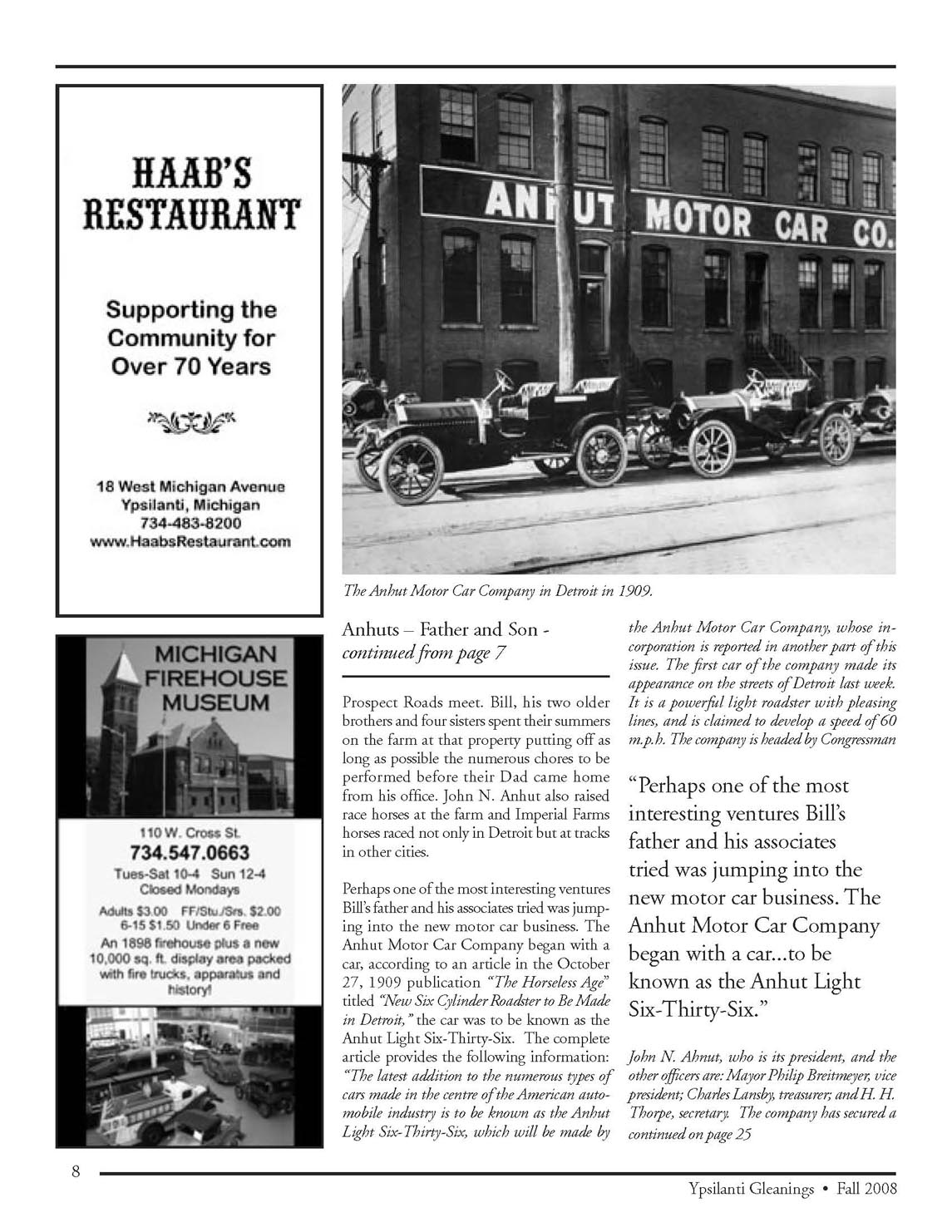 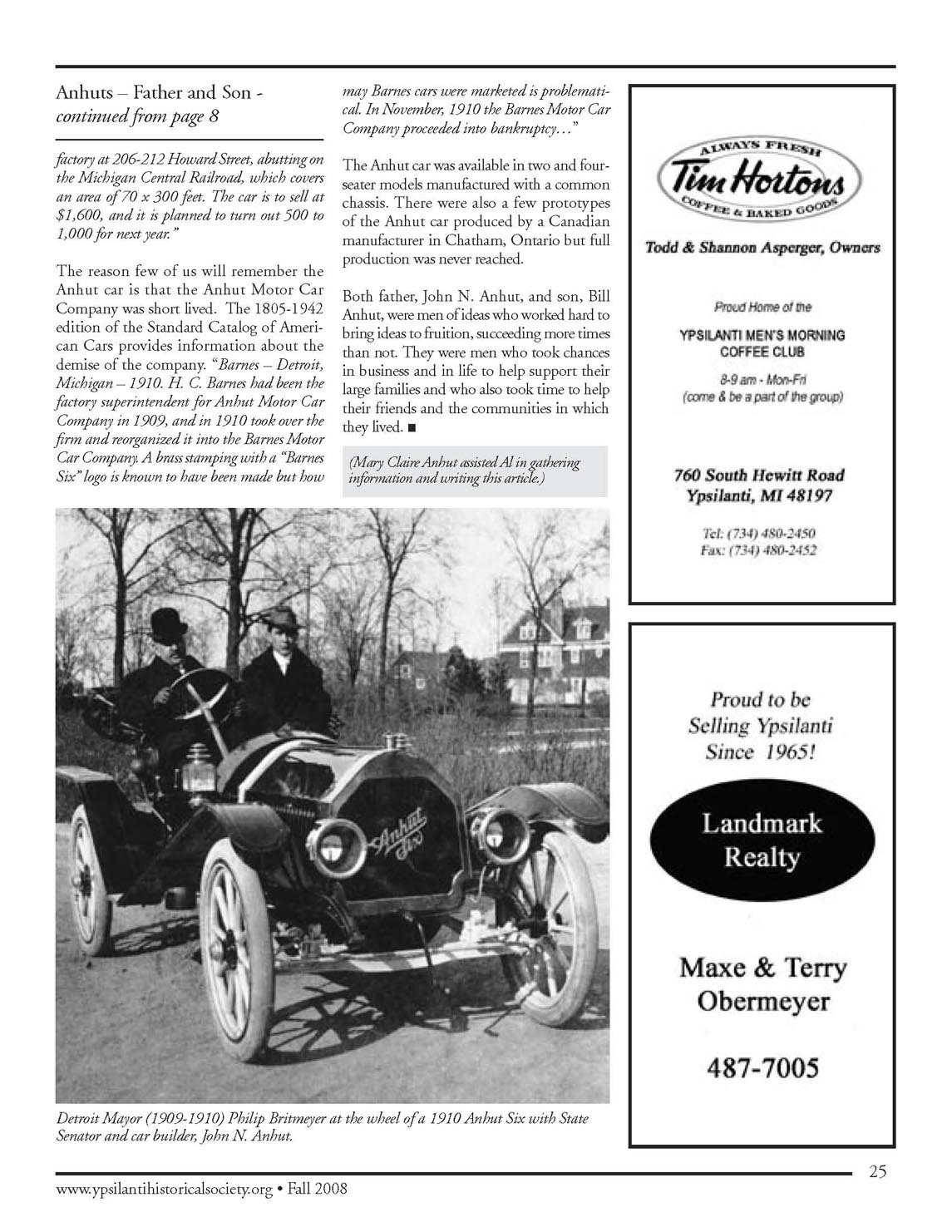 For most of us in the Ypsilanti community the word “Anhut” brings to mind the names of Bill and Mary Claire Anhut and their nine children. Both of the Anhuts have been involved in our community since 1963. Their activities have been many and varied while working for church, education and the many needs of the wider community. For their efforts the couple was honored in 1989 by the Ypsilanti Area Chamber of Commerce with the Distinguished Service Award.

William Frederick and Mary Claire (Dwyer) Anhut, both Detroiters, moved to Ypsilanti with their children when they purchased controlling interest in the Huron Hotel. That is where son followed father. John Nicholson Anhut was in the Detroit hotel business beginning in the 1930s. He purchased the Imperial and Clifford hotels in downtown Detroit and was the attorney for the Detroit Hotel Association. In 1951 he purchased The Botsford Inn from the estate of Mrs. Henry (Clara) Ford.

According to a piece in a Farmington History publication “While courting his wife, Henry Ford saw the Botsford Inn, and in 1924 purchased it from Milton Botsford. It was bought from Ford by John N. Anhut in 1951…” Actually, Henry and Clara square danced in the Inn’s ballroom and apparently bought the Inn for sentimental reasons. Later, as reported by vintage Inn waiters, Mr. Ford would close the Inn to outside patronage when the couple wished to dine there. Botsford Inn is a national landmark which, at the time of its operation as an inn was the oldest inn in Michigan providing food and housing.

Bill Anhut’s older brother, John Walsh Anhut, operated Botsford Inn very successfully until it was sold to Botsford Hospital in 2000. Bill worked at the Inn and at both hotels during summers and vacation times while he was a married student at the University of Michigan Law School from 1953 to 1956. For seven years after graduation he worked full time for his father. The family business was established by John N. Anhut under the name The Anhut Hotels Company. Bill had been inaugurated into the hotel business at the age of 14 when he was an elevator boy at the Lee Plaza apartment hotel on West Grand Boulevard. Years later as a Notre Dame college student, he worked summers at the family’s Clufford Hotel in the laundry. Mary Claire remembers Bill demonstrating for her the method of reaching into the huge hotel dryers with both arms and shaking and separating the wet sheets and towels so they would dry faster.

Both Bill and his dad were lawyers, hotel owners and operators and both had large families. But his dad had several additional ventures and accomplishments. At 25 years old he was the youngest state senator when he served in the Michigan Legislature 1909-1910. He owned land in Superior Township at three of the corners where Ford and Prospect Roads meet. Bill, his two older brothers and four sisters spent their summers on the farm at that property putting off as long as possible the numerous chores to be performed before their Dad came home from his office. John N. Anhut also raised race horses at the farm and Imperial Farms horses raced not only in Detroit but at tracks in other cities.

Perhaps one of the most interesting ventures Bill’s father and his associates tried was jumping into the new motor car business. The Anhut Motor Car Company began with a car, according to an article in the October 27, 1909 publication “The Horseless Age” titled “New Six Cylinder Roadster to Be Made in Detroit,” the car was to be known as the Anhut Light Six-Thirty-Six. The complete article provides the following information: “The latest addition to the numerous types of cars made in the centre of the American automobile industry is to be known as the Anhut Light Six-Thirty-Six, which will be made by the Anhut Motor Car Company, whose incorporation is reported in another part of this issue. The first car of the company made its appearance on the streets of Detroit last week. It is a powerful light roadster with pleasing lines, and is claimed to develop a speed of 60 m.p.h. The company is headed by Congressman John N. Ahnut, who is its president, and the other officers are: Mayor Philip Breitmeyer, vice president; Charles Lansby, treasurer; and H. H. Thorpe, secretary. The company has secured a factory at 206-212 Howard Street, abutting on the Michigan Central Railroad, which covers an area of 70 x 300 feet. The car is to sell at $1,600, and it is planned to turn out 500 to 1,000 for next year.”

The Anhut car was available in two and four-seater models manufactured with a common chassis. There were also a few prototypes of the Anhut car produced by a Canadian manufacturer in Chatham, Ontario but full production was never reached.

Both father, John N. Anhut, and son, Bill Anhut, were men of ideas who worked hard to bring ideas to fruition, succeeding more times than not. They were men who took chances in business and in life to help support their large families and who also took time to help their friends and the communities in which they lived.

Photo 1: The Bill and Mary Claire Anhut family at their 2006 reunion.