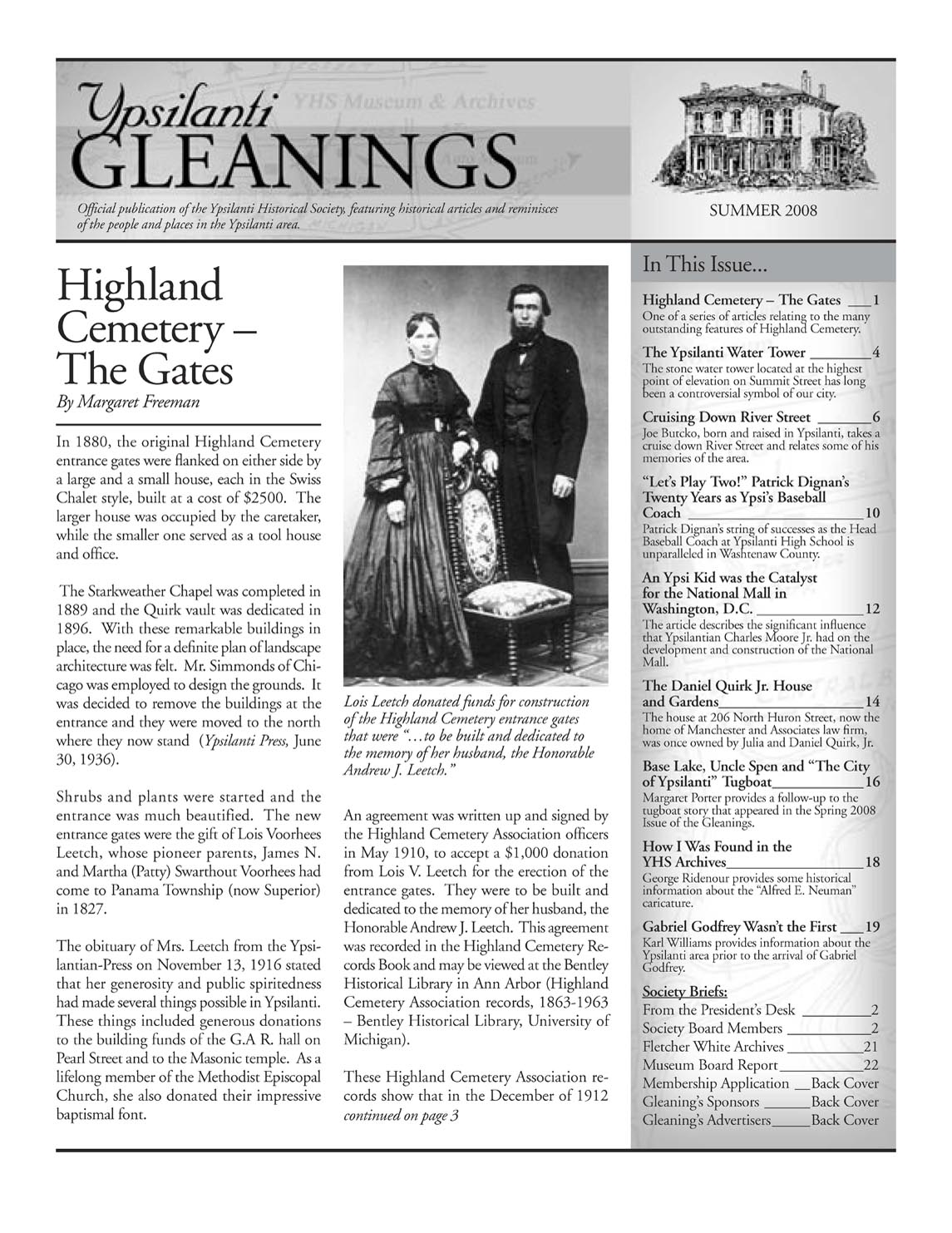 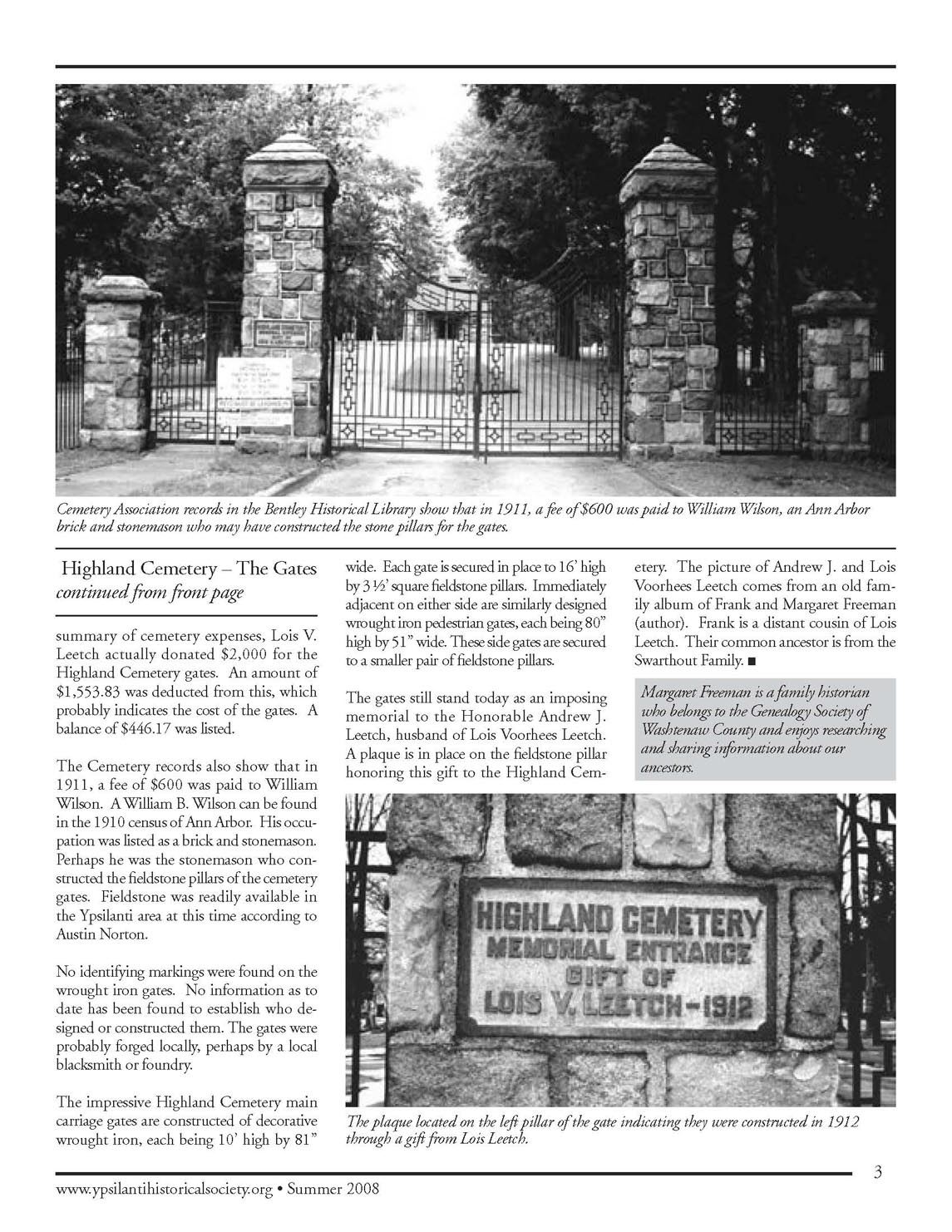 In 1880, the original Highland Cemetery entrance gates were flanked on either side by a large and a small house, each in the Swiss Chalet style, built at a cost of $2500. The larger house was occupied by the caretaker, while the smaller one served as a tool house and office.

The Starkweather Chapel was completed in 1889 and the Quirk vault was dedicated in 1896. With these remarkable buildings in place, the need for a definite plan of landscape architecture was felt. Mr. Simmonds of Chicago was employed to design the grounds. It was decided to remove the buildings at the entrance and they were moved to the north where they now stand (Ypsilanti Press, June 30, 1936).

Shrubs and plants were started and the entrance was much beautified. The new entrance gates were the gift of Lois Voorhees Leetch, whose pioneer parents, James N. and Martha (Patty) Swarthout Voorhees had come to Panama Township (now Superior) in 1827.

The obituary of Mrs. Leetch from the Ypsilantian-Press on November 13, 1916 stated that her generosity and public spiritedness had made several things possible in Ypsilanti. These things included generous donations to the building funds of the G.A R. hall on Pearl Street and to the Masonic temple. As a lifelong member of the Methodist Episcopal Church, she also donated their impressive baptismal font.

An agreement was written up and signed by the Highland Cemetery Association officers in May 1910, to accept a $1,000 donation from Lois V. Leetch for the erection of the entrance gates. They were to be built and dedicated to the memory of her husband, the Honorable Andrew J. Leetch. This agreement was recorded in the Highland Cemetery Records Book and may be viewed at the Bentley Historical Library in Ann Arbor (Highland Cemetery Association records, 1863-1963 – Bentley Historical Library, University of Michigan).

These Highland Cemetery Association records show that in the December of 1912 summary of cemetery expenses, Lois V. Leetch actually donated $2,000 for the Highland Cemetery gates. An amount of $1,553.83 was deducted from this, which probably indicates the cost of the gates. A balance of $446.17 was listed.

The Cemetery records also show that in 1911, a fee of $600 was paid to William Wilson. A William B. Wilson can be found in the 1910 census of Ann Arbor. His occupation was listed as a brick and stonemason. Perhaps he was the stonemason who constructed the fieldstone pillars of the cemetery gates. Fieldstone was readily available in the Ypsilanti area at this time according to Austin Norton.

No identifying markings were found on the wrought iron gates. No information has to date been found to establish who designed or constructed them. The gates were probably forged locally, perhaps by a local blacksmith or foundry.

The impressive Highland Cemetery main carriage gates are constructed of decorative wrought iron, each being 10’ high by 81” wide. Each gate is secured in place to 16’ high by 3 ½’ square fieldstone pillars. Immediately adjacent on either side are similarly designed wrought iron pedestrian gates, each being 80” high by 51” wide. These side gates are secured a smaller pair of fieldstone pillars.

The gates still stand today as an imposing memorial to the Honorable Andrew J. Leetch, husband of Lois Voorhees Leetch. A plaque is in place on the fieldstone pillar honoring this gift to the Highland Cemetery. The picture of Andrew J. and Lois Voorhees Leetch comes from an old family album of Frank and Margaret Freeman (author). Frank is a distant cousin of Lois Leetch. Their common ancestor is from the Swarthout Family.

(Margaret Freeman is a family historian who belongs to the Genealogy Society of Washtenaw County and enjoys researching and sharing information about our ancestors.)

Photo 1: Lois Leetch donated funds for construction of the Highland Cemetery entrance gates that were “…to be built and dedicated to the memory of her husband, the Honorable Andrew J. Leetch.”

Photo 2: Cemetery Association records in the Bentley Historical Library show that in 1911, a fee of $600 was paid to William Wilson, an Ann Arbor brick and stonemason who may have constructed the stone pillars for the gates.

Photo 3: The plaque located on the left pillar of the gate indicating they were constructed in 1912 through a gift from Lois Leetch.