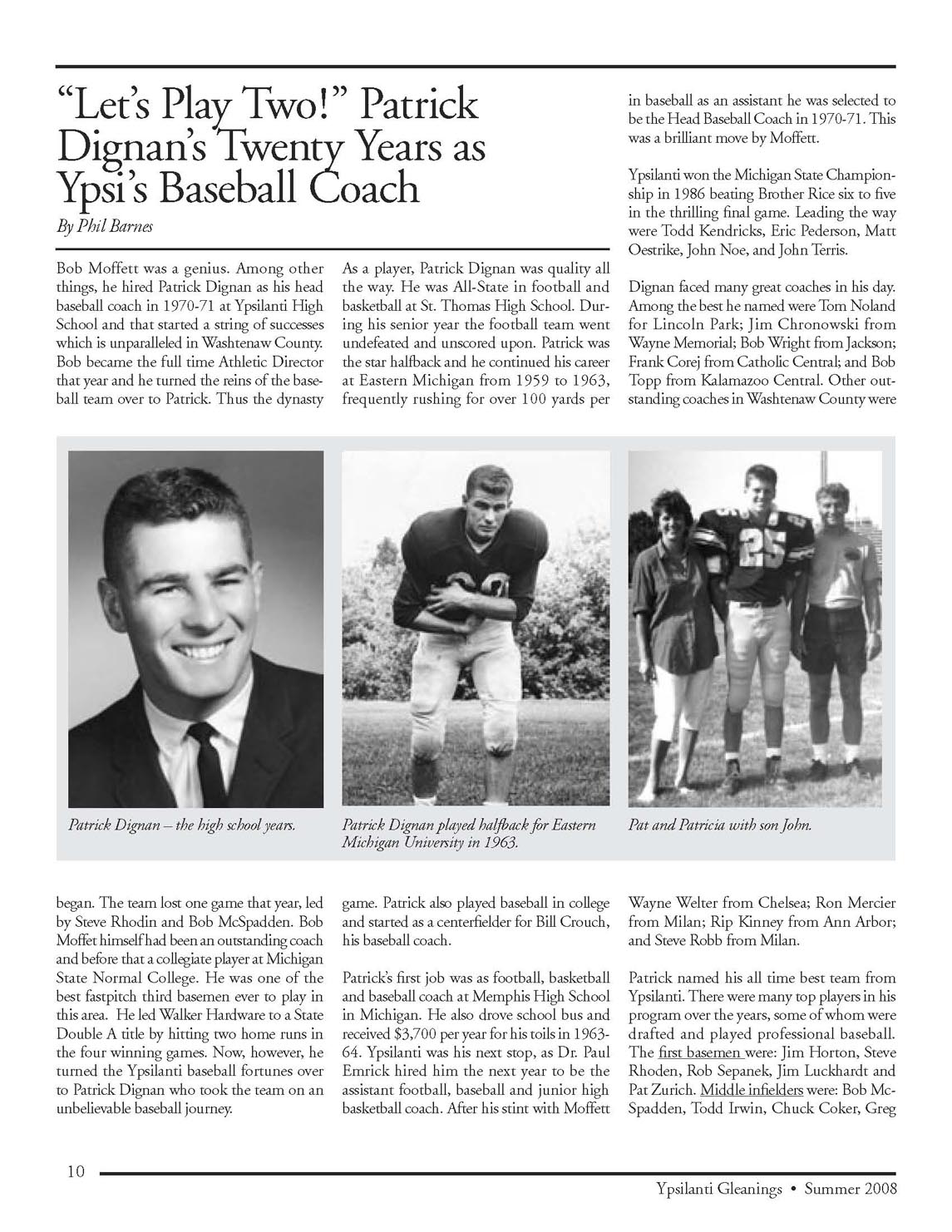 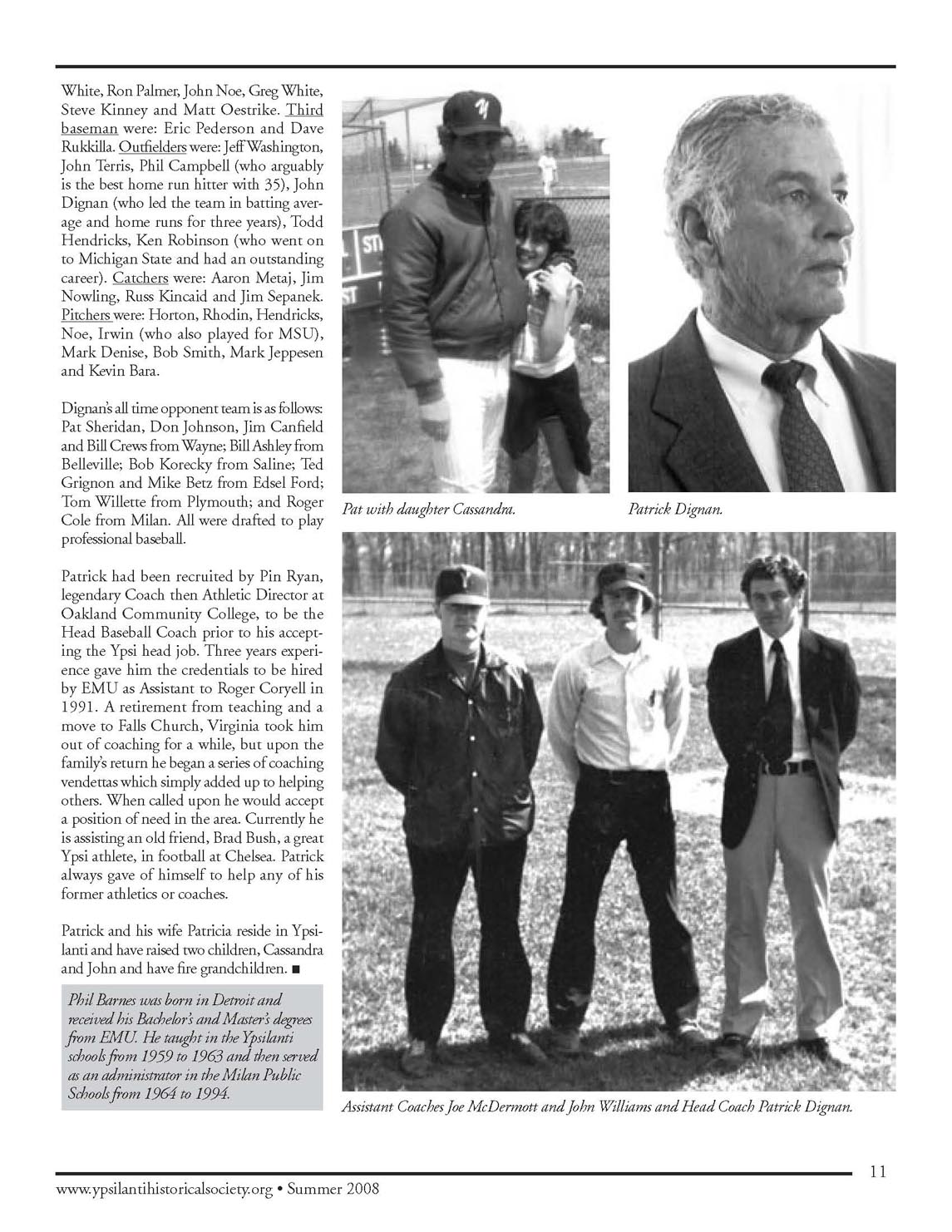 Bob Moffett was a genius. Among other things, he hired Patrick Dignan as his head baseball coach in 1970-71 at Ypsilanti High School and that started a string of successes which is unparalleled in Washtenaw County. Bob became the full time Athletic Director that year and he turned the reins of the baseball team over to Patrick. Thus the dynasty began. The team lost one game that year, led by Steve Rhodin and Bob McSpadden. Bob Moffet himself had been an outstanding coach and before that a collegiate player at Michigan State Normal College. He was one of the best fastpitch third basemen ever to play in this area. He led Walker Hardware to a State Double A title by hitting two home runs in the four winning games. Now, however, he turned the Ypsilanti baseball fortunes over to Patrick Dignan who took the team on an unbelievable baseball journey.

As a player, Patrick Dignan was quality all the way. He was All-State in football and basketball at St. Thomas High School. During his senior year the football team went undefeated and unscored upon. Patrick was the star halfback and he continued his career at Eastern Michigan from 1959 to 1963, frequently rushing for over 100 yards per game. Patrick also played baseball in college and started as a centerfielder for Bill Crouch, his baseball coach.

Patrick’s first job was as football, basketball and baseball coach at Memphis High School in Michigan. He also drove school bus and received $3,700 per year for his toils in 1963-64. Ypsilanti was his next stop, as Dr. Paul Emrick hired him the next year to be the assistant football, baseball and junior high basketball coach. After his stint with Moffett in baseball as an assistant he was selected to be the Head Baseball Coach in 1970-71. This was a brilliant move by Moffett.

Dignan faced many great coaches in his day. Among the best he named were Tom Noland for Lincoln Park; Jim Chronowski from Wayne Memorial; Bob Wright from Jackson; Frank Corej from Catholic Central; and Bob Topp from Kalamazoo Central. Other outstanding coaches in Washtenaw County were Wayne Welter from Chelsea; Ron Mercier from Milan; Rip Kinney from Ann Arbor; and Steve Robb from Milan.

Patrick had been recruited by Pin Ryan, legendary Coach then Athletic Director at Oakland Community College, to be the Head Baseball Coach prior to his accepting the Ypsi head job. Three years experience gave him the credentials to be hired by EMU as Assistant to Roger Coryell in 1991. A retirement from teaching and a move to Falls Church, Virginia took him out of coaching for a while, but upon the family’s return he began a series of coaching vendettas which simply added up to helping others. When called upon he would accept a position of need in the area. Currently he is assisting an old friend, Brad Bush, a great Ypsi athlete, in football at Chelsea. Patrick always gave of himself to help any of his former athletics or coaches.

Patrick and his wife Patricia reside in Ypsilanti and have raised two children, Cassandra and John and have fire grandchildren.

(Phil Barnes was born in Detroit and received his Bachelor’s and Master’s degrees from EMU. He taught in the Ypsilanti schools from 1959 to 1963 and then served as an administrator in the Milan Public Schools from 1964 to 1994.)