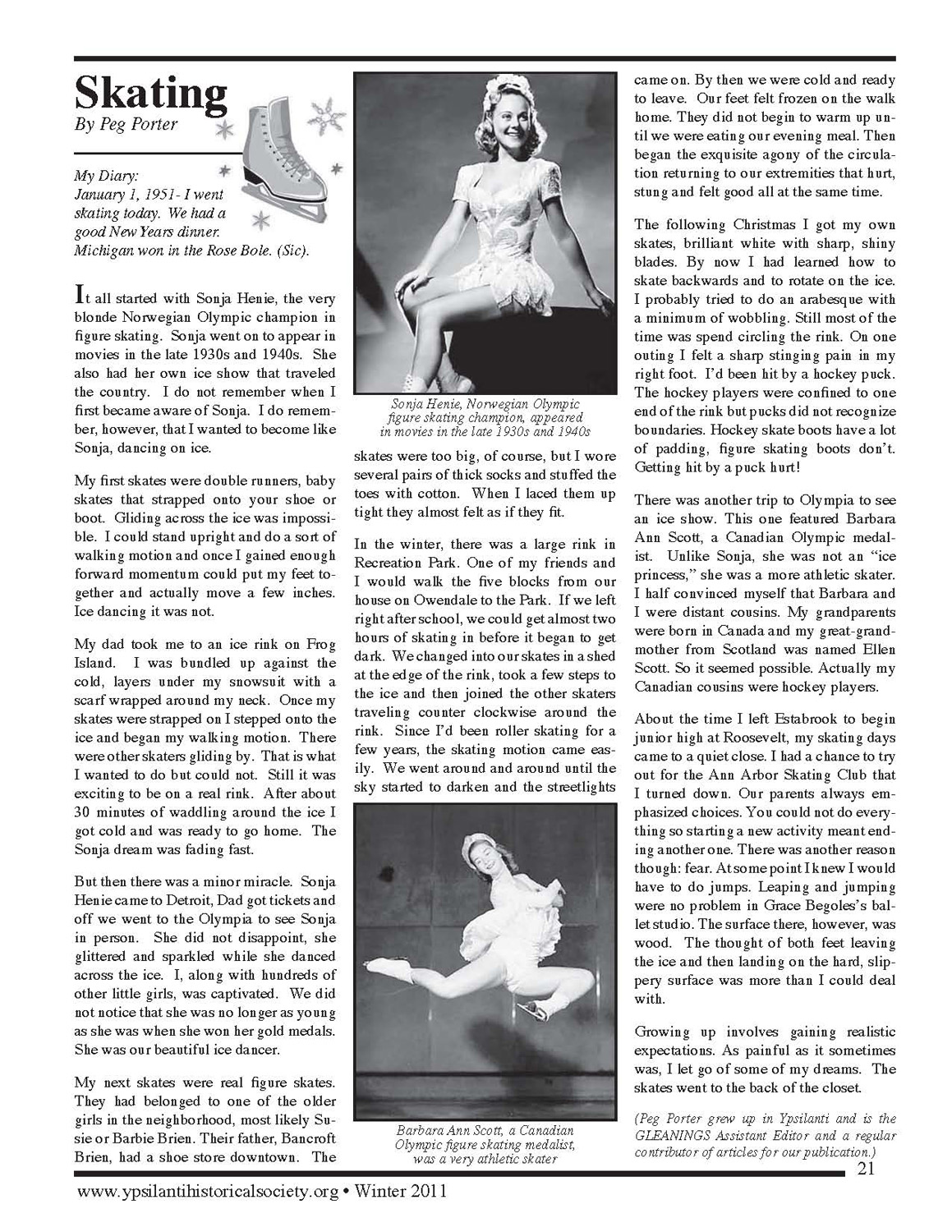 It all started with Sonja Henie, the very blonde Norwegian Olympic champion in figure skating. Sonja went on to appear in movies in the late 1930s and 1940s. She also had her own ice show that traveled the country. I do not remember when I first became aware of Sonja. I do remem- ber, however, that I wanted to become like Sonja, dancing on ice.

My first skates were double runners, baby skates that strapped onto your shoe or boot. Gliding across the ice was impossi- ble. I could stand upright and do a sort of walking motion and once I gained enough forward momentum could put my feet to- gether and actually move a few inches. Ice dancing it was not.

My dad took me to an ice rink on Frog Island. I was bundled up against the cold, layers under my snowsuit with a scarf wrapped around my neck. Once my skates were strapped on I stepped onto the ice and began my walking motion. There were other skaters gliding by. That is what I wanted to do but could not. Still it was exciting to be on a real rink. After about 30 minutes of waddling around the ice I got cold and was ready to go home. The Sonja dream was fading fast.

But then there was a minor miracle. Sonja Henie came to Detroit, Dad got tickets and off we went to the Olympia to see Sonja in person. She did not disappoint, she glittered and sparkled while she danced across the ice. I, along with hundreds of other little girls, was captivated. We did not notice that she was no longer as young as she was when she won her gold medals. She was our beautiful ice dancer.

My next skates were real figure skates. They had belonged to one of the older girls in the neighborhood, most likely Su- sie or Barbie Brien. Their father, Bancroft Brien, had a shoe store downtown. The skates were too big, of course, but I wore several pairs of thick socks and stuffed the toes with cotton. When I laced them up tight they almost felt as if they fit.

In the winter, there was a large rink in Recreation Park. One of my friends and I would walk the five blocks from our house on Owendale to the Park. If we left right after school, we could get almost two hours of skating in before it began to get dark. We changed into our skates in a shed at the edge of the rink, took a few steps to the ice and then joined the other skaters traveling counter clockwise around the rink. Since I’d been roller skating for a few years, the skating motion came eas- ily. We went around and around until the sky started to darken and the streetlights.

came on. By then we were cold and ready to leave. Our feet felt frozen on the walk home. They did not begin to warm up un- til we were eating our evening meal. Then began the exquisite agony of the circula- tion returning to our extremities that hurt, stung and felt good all at the same time.

The following Christmas I got my own skates, brilliant white with sharp, shiny blades. By now I had learned how to skate backwards and to rotate on the ice. I probably tried to do an arabesque with a minimum of wobbling. Still most of the time was spend circling the rink. On one outing I felt a sharp stinging pain in my right foot. I’d been hit by a hockey puck. The hockey players were confined to one end of the rink but pucks did not recognize boundaries. Hockey skate boots have a lot of padding, figure skating boots don’t. Getting hit by a puck hurt!

There was another trip to Olympia to see an ice show. This one featured Barbara Ann Scott, a Canadian Olympic medalist. Unlike Sonja, she was not an “ice princess,” she was a more athletic skater. I half convinced myself that Barbara and I were distant cousins. My grandparents were born in Canada and my great-grand- mother from Scotland was named Ellen Scott. So it seemed possible. Actually my Canadian cousins were hockey players.

About the time I left Estabrook to begin junior high at Roosevelt, my skating days came to a quiet close. I had a chance to try out for the Ann Arbor Skating Club that I turned down. Our parents always emphasized choices. You could not do every- thing so starting a new activity meant ending another one. There was another reason though: fear. At some point I knew I would have to do jumps. Leaping and jumping were no problem in Grace Begoles’s bal- let studio. The surface there, however, was wood. The thought of both feet leaving the ice and then landing on the hard, slip- pery surface was more than I could deal with.

Growing up involves gaining realistic expectations. As painful as it sometimes was, I let go of some of my dreams. The skates went to the back of the closet.

(Peg Porter grew up in Ypsilanti and is the GLEANINGS Assistant Editor and a regular contributor of articles for our publication.)