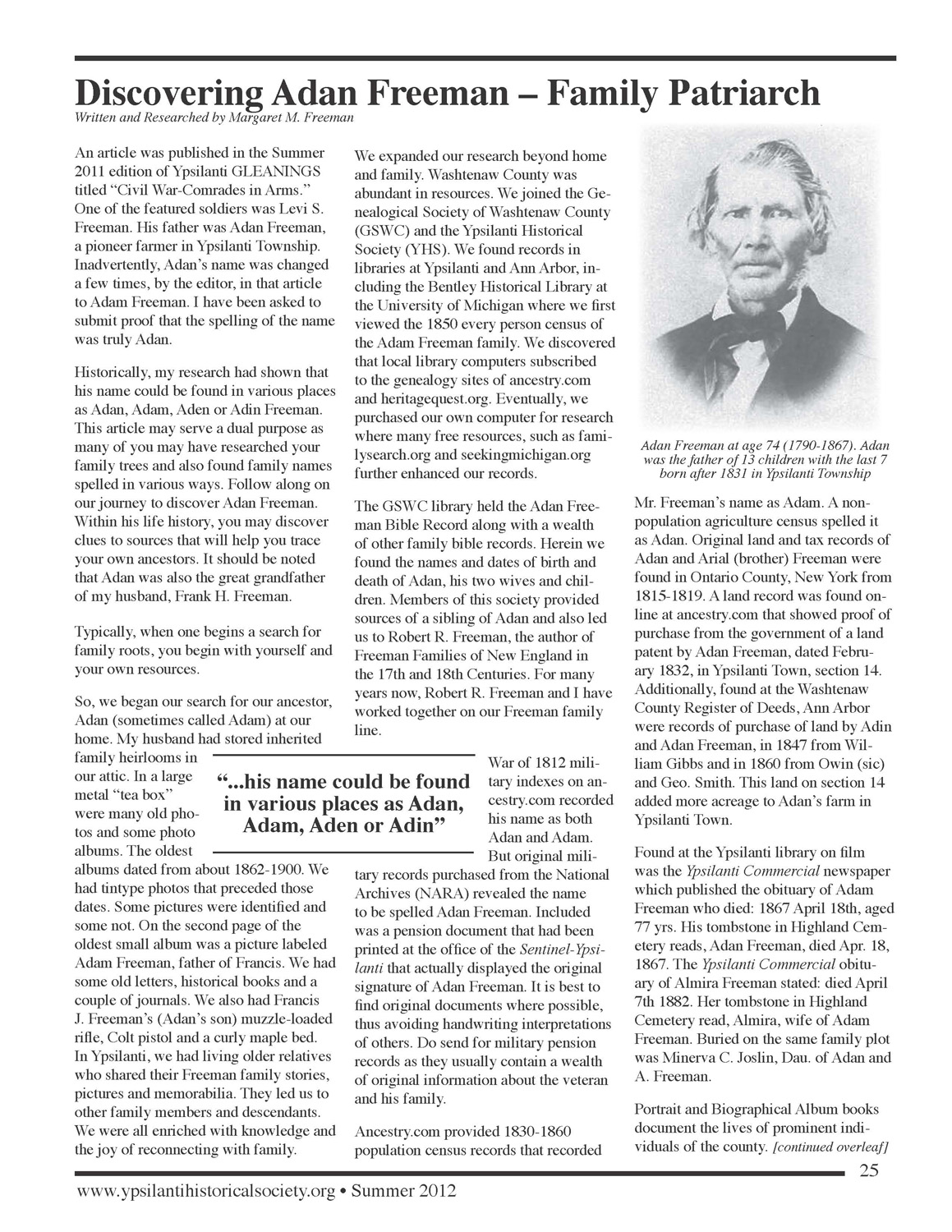 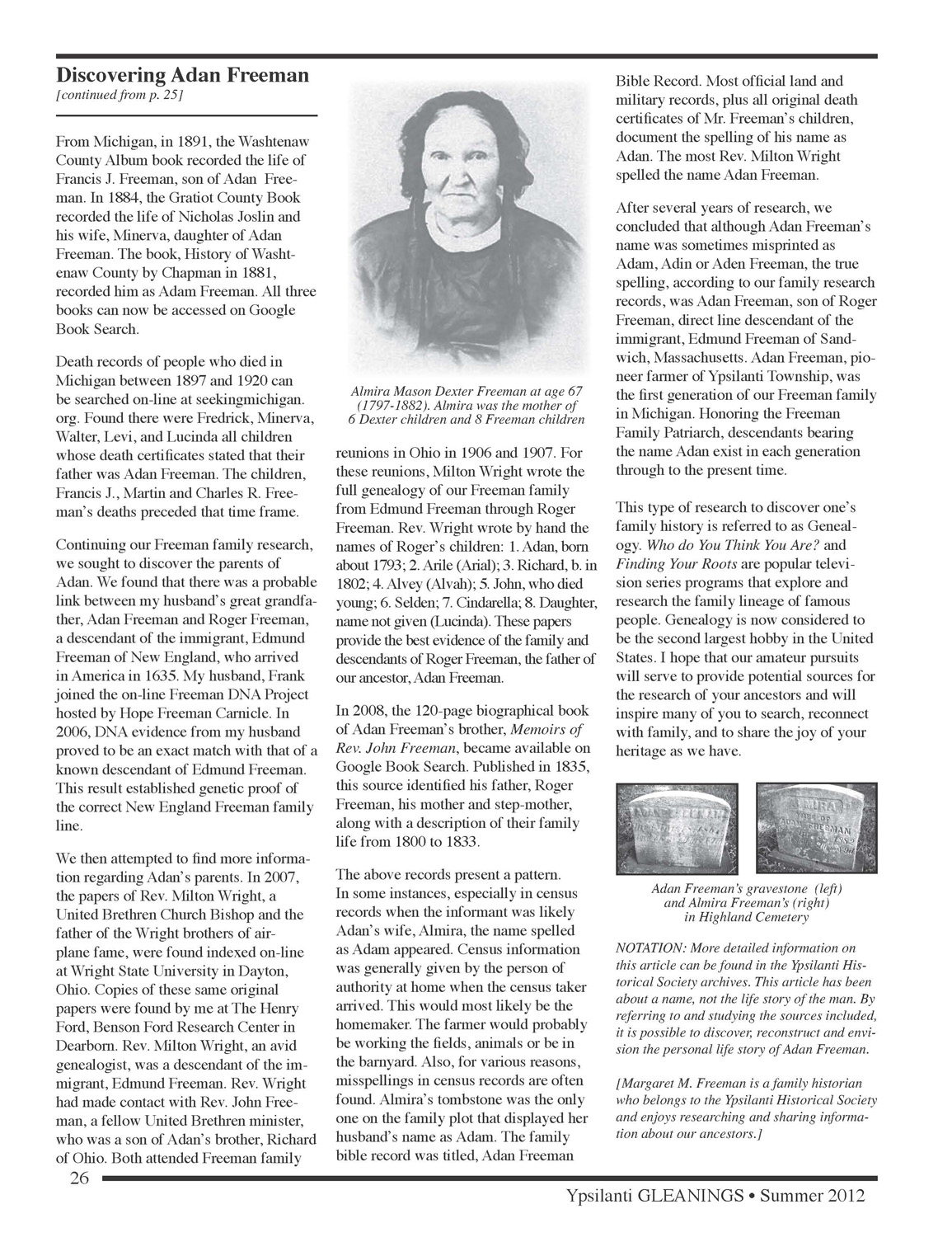 An article was published in the Summer 2011 edition of Ypsilanti GLEANINGS titled “Civil War – Comrades in Arms.” One of the featured soldiers was Levi S. Freeman. His father was Adan Freeman, a pioneer farmer in Ypsilanti Township. Inadvertently, Adan’s name was changed a few times, by the editor, in that article to Adam Freeman. I have been asked to submit proof that the spelling of the name was truly Adan.

Historically, my research had shown that his name could be found in various places as Adan, Adam, Aden or Adin Freeman. This article may serve a dual purpose as many of you may have researched your family trees and also found family names spelled in various ways. Follow along on our journey to discover Adan Freeman. Within his life history, you may discover clues to sources that will help you trace your own ancestors. It should be noted that Adan was also the great grandfather of my husband, Frank H. Freeman.

Typically, when one begins a search for family roots, you begin with yourself and your own resources.

So, we began our search for our ancestor, Adan (sometimes called Adam) at our home. My husband had stored inherited family heirlooms in our attic. In a large metal “tea box” were many old photos and some photo albums. The oldest albums dated from about 1862-1900. We had tintype photos that preceded those dates. Some pictures were identified and some not. On the second page of the oldest small album was a picture labeled Adam Freeman, father of Francis. We had some old letters, historical books and a couple of journals. We also had Francis
J. Freeman’s (Adan’s son) muzzle-loaded rifle, Colt pistol and a curly maple bed. In Ypsilanti, we had living older relatives who shared their Freeman family stories, pictures and memorabilia. They led us to other family members and descendants. We were all enriched with knowledge and the joy of reconnecting with family.

We expanded our research beyond home and family. Washtenaw County was abundant in resources. We joined the Genealogical Society of Washtenaw County (GSWC) and the Ypsilanti Historical Society (YHS). We found records in libraries at Ypsilanti and Ann Arbor, including the Bentley Historical Library at the University of Michigan where we first viewed the 1850 every person census of the Adam Freeman family. We discovered that local library computers subscribed to the genealogy sites of ancestry.com and heritagequest.org. Eventually, we purchased our own computer for research where many free resources, such as familysearch.org and seekingmichigan.org further enhanced our records.

The GSWC library held the Adan Freeman Bible Record along with a wealth of other family bible records. Herein we found the names and dates of birth and death of Adan, his two wives and children. Members of this society provided sources of a sibling of Adan and also led us to Robert R. Freeman, the author of Freeman Families of New England in the 17th and 18th Centuries. For many years now, Robert R. Freeman and I have worked together on our Freeman family line.

War of 1812 military indexes on ancestry.com recorded his name as both Adan and Adam. But original military records purchased from the National Archives (NARA) revealed the name to be spelled Adan Freeman. Included was a pension document that had been printed at the office of the Sentinel-Ypsilanti that actually displayed the original signature of Adan Freeman. It is best to find original documents where possible, thus avoiding handwriting interpretations of others. Do send for military pension records as they usually contain a wealth of original information about the veteran and his family.

Ancestry.com provided 1830-1860 population census records that recorded Mr. Freeman’s name as Adam. A non- population agriculture census spelled it as Adan. Original land and tax records of Adan and Arial (brother) Freeman were found in Ontario County, New York from 1815-1819. A land record was found online at ancestry.com that showed proof of purchase from the government of a land patent by Adan Freeman, dated February 1832, in Ypsilanti Town, section 14. Additionally, found at the Washtenaw County Register of Deeds, Ann Arbor were records of purchase of land by Adin and Adan Freeman, in 1847 from William Gibbs and in 1860 from Owin (sic) and Geo. Smith. This land on section 14 added more acreage to Adan’s farm in Ypsilanti Town.

Found at the Ypsilanti library on film was the Ypsilanti Commercial newspaper which published the obituary of Adam Freeman who died: 1867 April 18th, aged 77 yrs. His tombstone in Highland Cemetery reads, Adan Freeman, died Apr. 18, 1867. The Ypsilanti Commercial obituary of Almira Freeman stated: died April 7th 1882. Her tombstone in Highland Cemetery read, Almira, wife of Adam Freeman. Buried on the same family plot was Minerva C. Joslin, Dau. of Adan and A. Freeman.

Portrait and Biographical Album books document the lives of prominent individuals of the county.

Death records of people who died in Michigan between 1897 and 1920 can be searched on-line at seekingmichigan.org. Found there were Fredrick, Minerva, Walter, Levi, and Lucinda all children whose death certificates stated that their father was Adan Freeman. The children, Francis J., Martin and Charles R. Freeman’s deaths preceded that time frame.

Continuing our Freeman family research, we sought to discover the parents of Adan. We found that there was a probable link between my husband’s great grandfather, Adan Freeman and Roger Freeman, a descendant of the immigrant, Edmund Freeman of New England, who arrived in America in 1635. My husband, Frank joined the on-line Freeman DNA Project hosted by Hope Freeman Carnicle. In 2006, DNA evidence from my husband proved to be an exact match with that of a known descendant of Edmund Freeman. This result established genetic proof of the correct New England Freeman family line.

We then attempted to find more information regarding Adan’s parents. In 2007, the papers of Rev. Milton Wright, a United Brethren Church Bishop and the father of the Wright brothers of airplane fame, were found indexed on-line at Wright State University in Dayton, Ohio. Copies of these same original papers were found by me at The Henry Ford, Benson Ford Research Center in Dearborn. Rev. Milton Wright, an avid genealogist, was a descendant of the immigrant, Edmund Freeman. Rev. Wright had made contact with Rev. John Freeman, a fellow United Brethren minister, who was a son of Adan’s brother, Richard of Ohio. Both attended Freeman family reunions in Ohio in 1906 and 1907. For these reunions, Milton Wright wrote the full genealogy of our Freeman family from Edmund Freeman through Roger Freeman. Rev. Wright wrote by hand the names of Roger’s children: 1. Adan, born about 1793; 2. Arile (Arial); 3. Richard, b. in 1802; 4. Alvey (Alvah); 5. John, who died young; 6. Selden; 7. Cindarella; 8. Daughter, name not given (Lucinda). These papers provide the best evidence of the family and descendants of Roger Freeman, the father of our ancestor, Adan Freeman.

In 2008, the 120-page biographical book of Adan Freeman’s brother, Memoirs of Rev. John Freeman, became available on Google Book Search. Published in 1835, this source identified his father, Roger Freeman, his mother and step-mother, along with a description of their family life from 1800 to 1833.

The above records present a pattern. In some instances, especially in census records when the informant was likely Adan’s wife, Almira, the name spelled as Adam appeared. Census information was generally given by the person of authority at home when the census taker arrived. This would most likely be the homemaker. The farmer would probably be working the fields, animals or be in the barnyard. Also, for various reasons, misspellings in census records are often found. Almira’s tombstone was the only one on the family plot that displayed her husband’s name as Adam. The family bible record was titled, Adan Freeman Bible Record. Most official land and military records, plus all original death certificates of Mr. Freeman’s children, document the spelling of his name as Adan. The most Rev. Milton Wright spelled the name Adan Freeman.

After several years of research, we concluded that although Adan Freeman’s name was sometimes misprinted as Adam, Adin or Aden Freeman, the true spelling, according to our family research records, was Adan Freeman, son of Roger Freeman, direct line descendant of the immigrant, Edmund Freeman of Sandwich, Massachusetts. Adan Freeman, pioneer farmer of Ypsilanti Township, was the first generation of our Freeman family in Michigan. Honoring the Freeman Family Patriarch, descendants bearing the name Adan exist in each generation through to the present time.

This type of research to discover one’s family history is referred to as Genealogy. Who do You Think You Are? and Finding Your Roots are popular television series programs that explore and research the family lineage of famous people. Genealogy is now considered to be the second largest hobby in the United States. I hope that our amateur pursuits will serve to provide potential sources for the research of your ancestors and will inspire many of you to search, reconnect with family, and to share the joy of your heritage as we have.

NOTATION: More detailed information on this article can be found in the Ypsilanti Historical Society archives. This article has been about a name, not the life story of the man. By referring to and studying the sources included, it is possible to discover, reconstruct and envision the personal life story of Adan Freeman.

[Margaret M. Freeman is a family historian who belongs to the Ypsilanti Historical Society and enjoys researching and sharing information about our ancestors.]