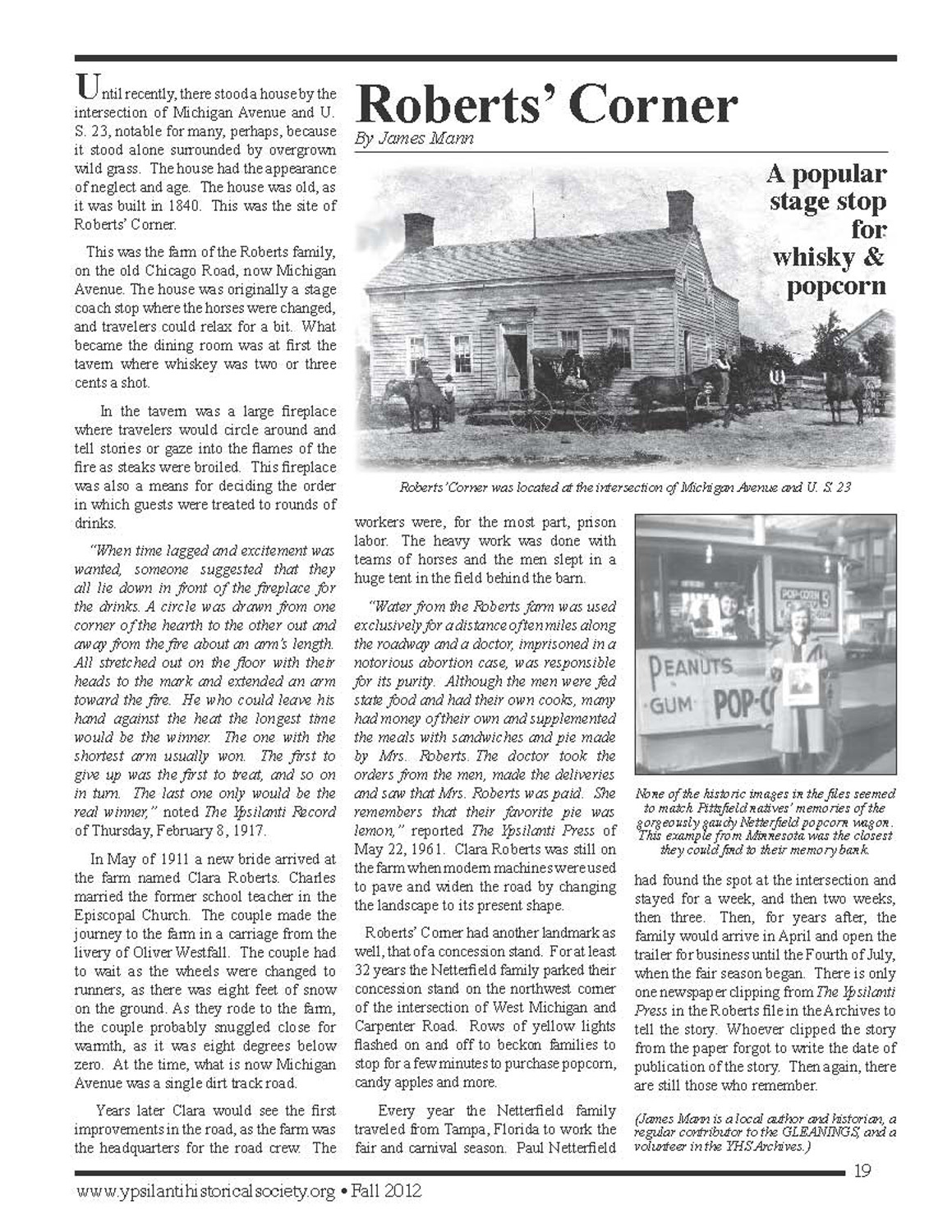 Until recently there stood a house by the intersection of Michigan Avenue and U. S. 23, notable for many perhaps, because it stood alone surrounded by overgrown wild grass. The house had the appearance of neglect and age. The house was old as it was built in 1840. This was the site of Robert’s Corner. This was the farm of the Roberts family, on the old Chicago Road, now Michigan Avenue. The house was originally a stage coach stop, where the horses were changed, and travelers could relax for a bit. What became the dining room was at first the tavern, where whiskey was two or three cents a shot. In the traven was a large fireplace, where travelers would circle around and tell stories, or gaze into the flames of the fire as steaks were broiled. This fireplace was also a means for deciding the order in which guests were treated to rounds of drinks. “When time lagged and excitement was wanted, someone suggested that they all lie down in front of the fireplace for the drinks. A circle was drawn from one corner of the hearth to the other out and away from the fire about an arm’s length. All stretched out on the floor with their heads to the mark and extended an arm toward the fire. He who could leave his hand against the heat the longest time would be the winner. The one with the shortest arm usually won. The first to give up was the first to treat, and so on in turn. The last one only would be the real winner,” noted The Ypsilanti Record of Thursday, February 8, 1917. In May of 1911 a new bride arrived at the farm named Clara Roberts. Charles married the former school teacher in the Episcopal Church. The couple made the journey to the farm in a carriage from the livery of Oliver Westfall. The couple had to wait as the wheels were changed to runners, as there was eight feet of snow on the ground. As they rode to the farm, the couple probably snuggled close for warmth, as it was eight degrees below zero. At the time what is now Michigan Avenue was a single dirt track road. Years later Clara would see the first improvements in the road, as the farm was the headquarters for the crew. The workers were, for the most part, prison labor. The heavy work was done with teams of horses and the men slept in a huge tent in the field behind the barn. “Water from the Roberts farm was used exclusively for a distance of ten miles along the roadway and a doctor, imprisoned in a notorious abortion case, was responsible for its purity. Although the men were fed state food and had their own cooks many had money of their own and supplemented the meals with sandwiches and pie made by Mrs. Roberts. The doctor took the orders from the men, made the deliveries and saw that Mrs. Roberts was paid. She remembers that their favorite pie was lemon,” reported The Ypsilanti Press of May 22, 1961. Clara Roberts was still on the farm when modern machines were used to pave and widen the road, by changing the landscape to its present shape. Roberts Corner had another landmark as well, that of a concession stand. For at least 32 years the Netterfield family parked their concession stand at the intersection of West Michigan and Carpenter Road. Rows of yellow lights flashed on and off to beckon families to stop for a few minutes to purchase popcorn, candy apples and more. Every year the Netterfield family traveled from Tampa, Florida to work the fair and carnival season. Paul Netterfield had found the spot at the intersection and stayed for a week, and then two weeks, then three. Then, for years after, the family would arrive in April and open the trailer for business until the Fourth of July, when the fair season began. There is only one newspaper clipping from The Ypsilanti Press in the Roberts file in the Archives to tell the story. Whoever clipped the story from the paper forgot to write the date of publication of the story. Then again, there are still those who remember. (James Mann is a local author and historian, a regular contributor to the Gleanings, and a volunteer in the YHS Archives.)

Photo Caption: Photo 1: Roberts Corner was located at the intersection of Michigan Avenue and U. S. 23.