Are you smarter than an eighth-grader? 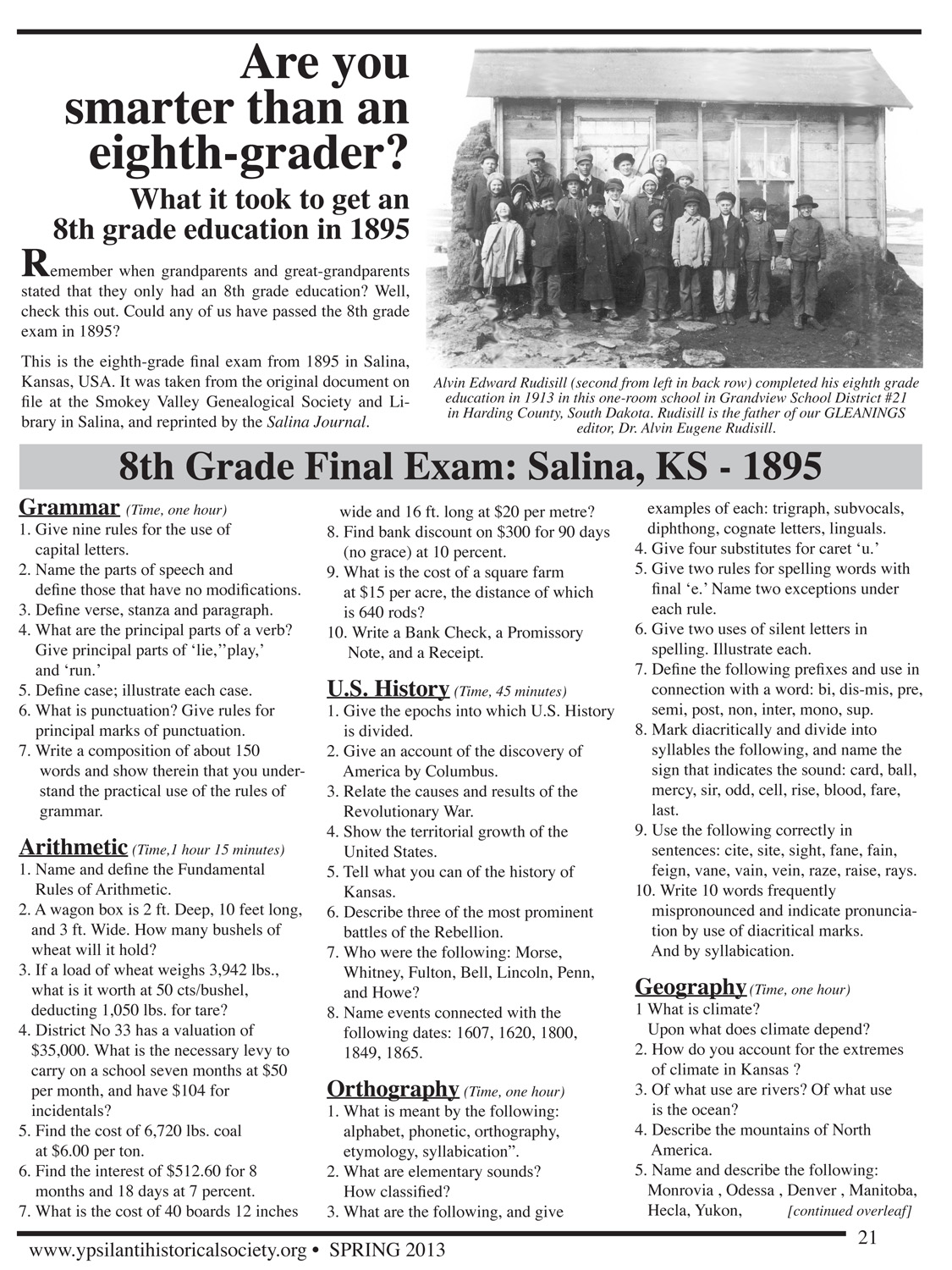 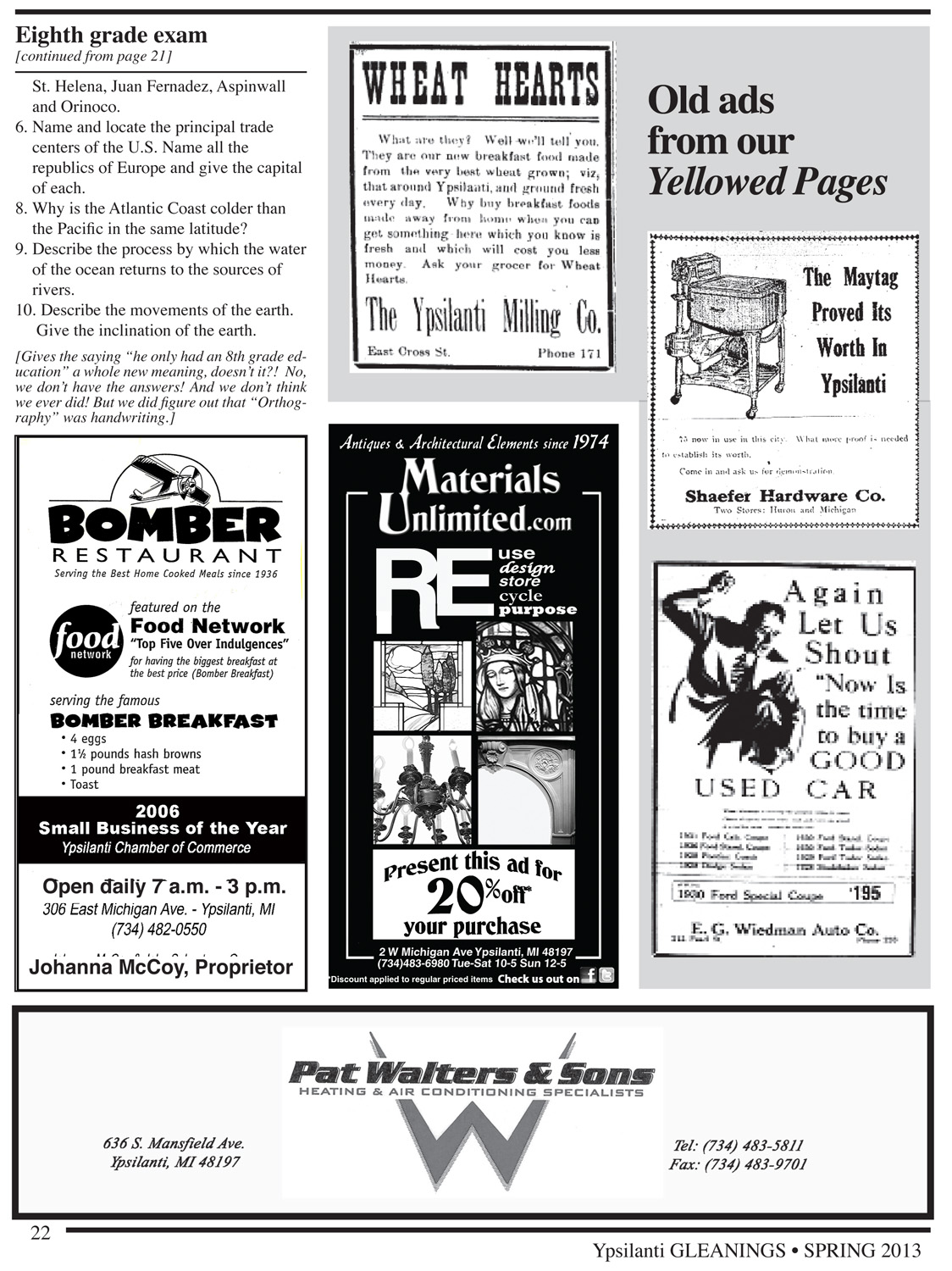 What it took to get an 8th grade education in 1895

Remember when grandparents and great-grandparents stated that they only had an 8th grade education? Well, check this out. Could any of us have passed the 8th grade exam in 1895?

This is the eighth-grade final exam from 1895 in Salina, Kansas, USA. It was taken from the original document on file at the Smokey Valley Genealogical Society and Library in Salina, and reprinted by the Salina Journal.

Grammar (Time, one hour)
1. Give nine rules for the use of capital letters.
2. Name the parts of speech and define those that have no modifications.
3. Define verse, stanza and paragraph.
4. What are the principal parts of a verb? Give principal parts of ‘lie,’ ’play,’ and ‘run.’
5. Define case; illustrate each case.
6. What is punctuation? Give rules for principal marks of punctuation.
7. Write a composition of about 150 words and show therein that you understand the practical use of the rules of grammar.

U.S. History (Time, 45 minutes)
1. Give the epochs into which U.S. History is divided.
2. Give an account of the discovery of America by Columbus.
3. Relate the causes and results of the Revolutionary War.
4. Show the territorial growth of the United States.
5. Tell what you can of the history of Kansas.
6. Describe three of the most prominent battles of the Rebellion.
7. Who were the following: Morse, Whitney, Fulton, Bell, Lincoln, Penn, and Howe?
8. Name events connected with the following dates: 1607, 1620, 1800, 1849, 1865.

Orthography (Time, one hour)
1. What is meant by the following: alphabet, phonetic, orthography, etymology, syllabication”.
2. What are elementary sounds? How classified?
3. What are the following, and give examples of each: trigraph, subvocals, diphthong, cognate letters, linguals.
4. Give four substitutes for caret ‘u.’
5. Give two rules for spelling words with final ‘e.’ Name two exceptions under each rule.
6. Give two uses of silent letters in spelling. Illustrate each.
7. Define the following prefixes and use in connection with a word: bi, dis-mis, pre, semi, post, non, inter, mono, sup.
8. Mark diacritically and divide into syllables the following, and name the sign that indicates the sound: card, ball, mercy, sir, odd, cell, rise, blood, fare, last.
9. Use the following correctly in sentences: cite, site, sight, fane, fain, feign, vane, vain, vein, raze, raise, rays.
10. Write 10 words frequently mispronounced and indicate pronunciation by use of diacritical marks. And by syllabication.

Geography (Time, one hour)
1 What is climate? Upon what does climate depend?
2. How do you account for the extremes of climate in Kansas ?
3. Of what use are rivers? Of what use is the ocean?
4. Describe the mountains of North America.
5. Name and describe the following: Monrovia , Odessa , Denver , Manitoba,
Hecla, Yukon, St. Helena, Juan Fernadez, Aspinwall
and Orinoco.
6. Name and locate the principal trade centers of the U.S. Name all the republics of Europe and give the capital of each.
8. Why is the Atlantic Coast colder than the Pacific in the same latitude?
9. Describe the process by which the water of the ocean returns to the sources of
rivers.
10. Describe the movements of the earth. Give the inclination of the earth.

[Gives the saying “he only had an 8th grade education” a whole new meaning, doesn’t it?! No, we don’t have the answers! And we don’t think we ever did! But we did figure out that “Orthography” was handwriting.]

1. Alvin Edward Rudisill (second from left in back row) completed his eighth grade education in 1913 in this one-room school in Grandview School District #21 in Harding County, South Dakota. Rudisill is the father of our GLEANINGS editor, Dr. Alvin Eugene Rudisill.